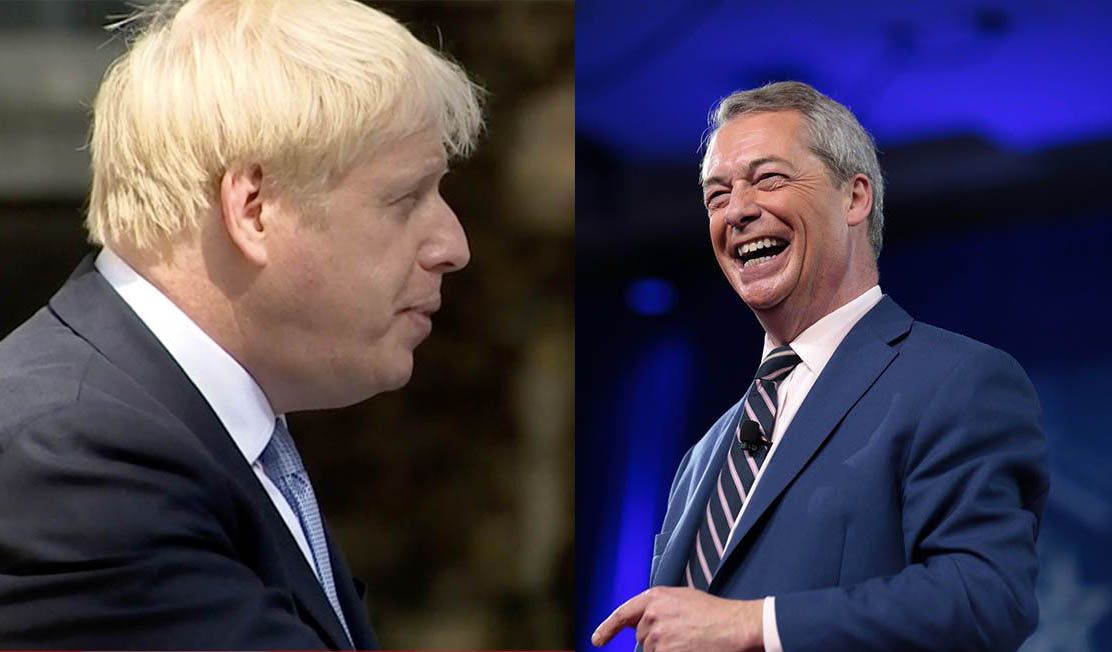 - All eyes on Brexit Party today

- Reports Conservatives have offered a deal

The British Pound could rally today if a last-ditch deal is struck between the Conservative Party and Brexit Party aimed at ensuring the leave vote is not split in the upcoming General Election.

"In the UK, it is the deadline for candidate declarations and time to see whether Farage will stick to his plan to run candidates in all Labour-Tory marginal previously won by Labour," says Adam Cole, a foreign exchange strategist with RBC Capital Markets.

"A decision not to do so would be GBP-positive based on markets’ revealed preference for a Tory win but as late as yesterday, the Brexit party was reiterating it would only stand down in seats won by the Tories in 2017," says Cole.

The Telegraph newspaper today reveals that the Conservatives have in fact offered an electoral pact to Nigel Farage that would leave the Brexit Party targeting just 40 key seats.

According to the report, Conservative leader Boris Johnson was prepared to put up 'paper candidates' in the Labour-held constituencies that they have little hope of winning. A 'paper candidate' is where a party does not bother to campaign for their no-hoper.

In this instance, the Conservatives would field paper candidates in the 40 constituencies where the Brexit Party have a shot of winning. The Telegraph's Christopher Hope notes, "as the deadline for nominations approaches at 4pm on Thursday, Mr Farage remains under intense pressure to make further concessions beyond the 317 candidates he has already stood down from running in seats won by the Tories in 2017."

It is however clear that Farage has not yet bitten and gone for the Conservative's offer, being resolute in his intention to field candidates in all non-Conservative seats. At the time of writing on Thursday it does however appear Farage remains resolute.

Nevertheless, what the Telegraph's report tells us is there has been movement on both sides, but it appears the Conservatives are yet to cede the ground Farage requires.

Could there yet be an 11th hour deal? If there is, we could well expect Sterling to rally.

In an effort to try and ensure the 'leave' vote is not split at the upcoming vote, Brexit Party Chairman Richard Tice said his party will not contest the 317 constituencies won by the Conservatives at the last election. "We are putting country before party," says Tice. Now we will focus on taking the fight to Corbyn’s Labour, including here in Hartlepool where we can win."

Party leader Nigel Farage said the decision to withdraw from Conservative seats was prompted by Prime Minister Boris Johnson's commitment to not extend the transition period set out in the Brexit agreement to beyond 2020, while also committing to seek a free trade deal with the EU that falls along the lines of the existing EU-Canada trade agreement.

Sterling has entered a period in which it reacts positively to signs of a Conservative victory because it will ensure a Brexit deal could be passed through Parliament as soon as January, thereby putting to rest months of crippling uncertainty for UK businesses.

"Sterling took a leg higher as the Tories were given an early Christmas present from Nigel Farage, one which will be warmly received in CCHQ," says Neil Wilson, Chief Market Analyst for Markets.com. "The Pound is stronger since a clear, decisive election win for the Conservatives will provide clarity on Brexit – anything else becomes messy."

The UK economy has been craving certainty since the June 2016 EU referendum result, and the passing of a Brexit deal goes a long way in providing that certainty. Underlining the point was the release of GDP data on Monday that showed the economy is growing at its slowest pace in ten years.