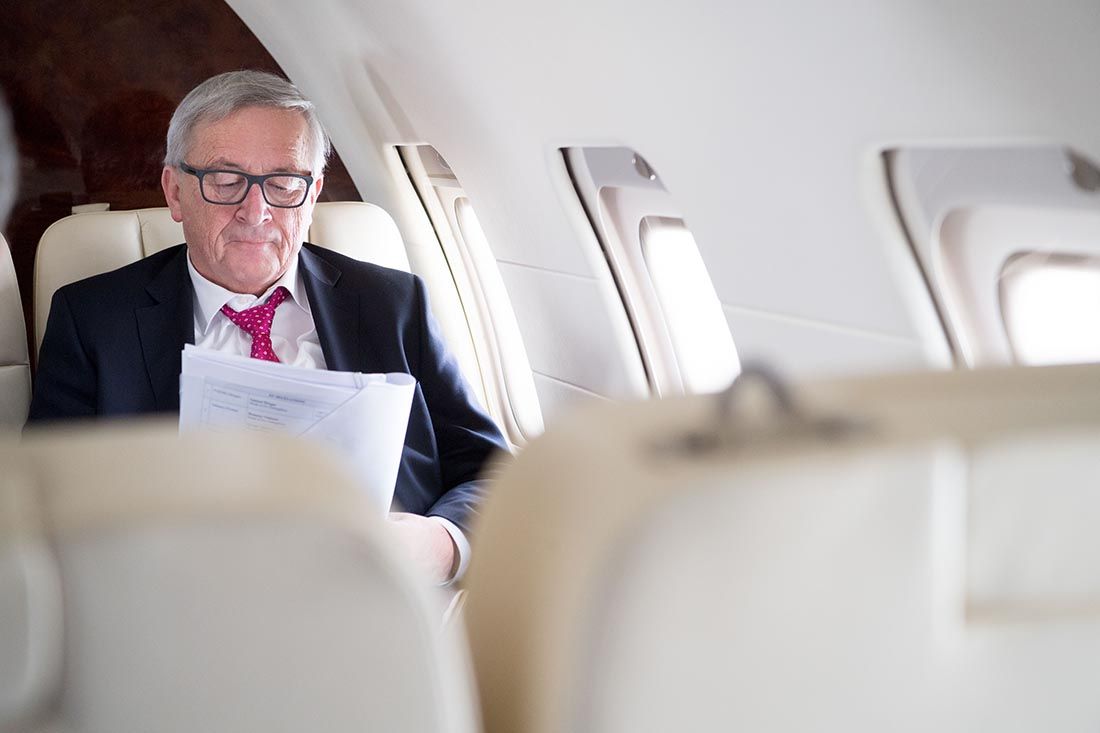 - Converts 2019 losses to profits against safe-havens.

- But has more upside Vs USD than EUR says SEB.

- SEB says the EUR also to benefit from Brexit deal.

The Pound rallied again Friday amid celebrations of an ebbing in 'no deal' Brexit risk and as Prime Minister Boris Johnson returned from Brussels proclaiming a new deal, but the British currency has more upside potential against the Dollar than Euro, according to Skandinaviska Enskilda Banken (SEB).

Pound Sterling has converted 2019 losses into profits against all the safe-haven currencies this month, with much of those gains coming inside the last week alone, and nowhere else is the scale of the rally more apparent than on the charts of the Pound-to-Dollar and Pound-to-Yen exchange rates. Sterling has risen 1.92% against the greenback this week, leading it to a 1.1% 2019 gain, while the Pound-to-Yen rate has gone from a -2% loss to being up 2.26%.

However, the British uit has risen only 0.88% this week against the Euro because the single currency has also shared in the rewards of market jubilation over the mounting prospect of 'no deal' Brexit risk being put to bed once and for all - sooner or later. And in the short-term at least, Sterling's upward move is being underwritten by a Saturday vote that will either see parliament back Johnson's proposal or force him into requesting a third Brexit delay. 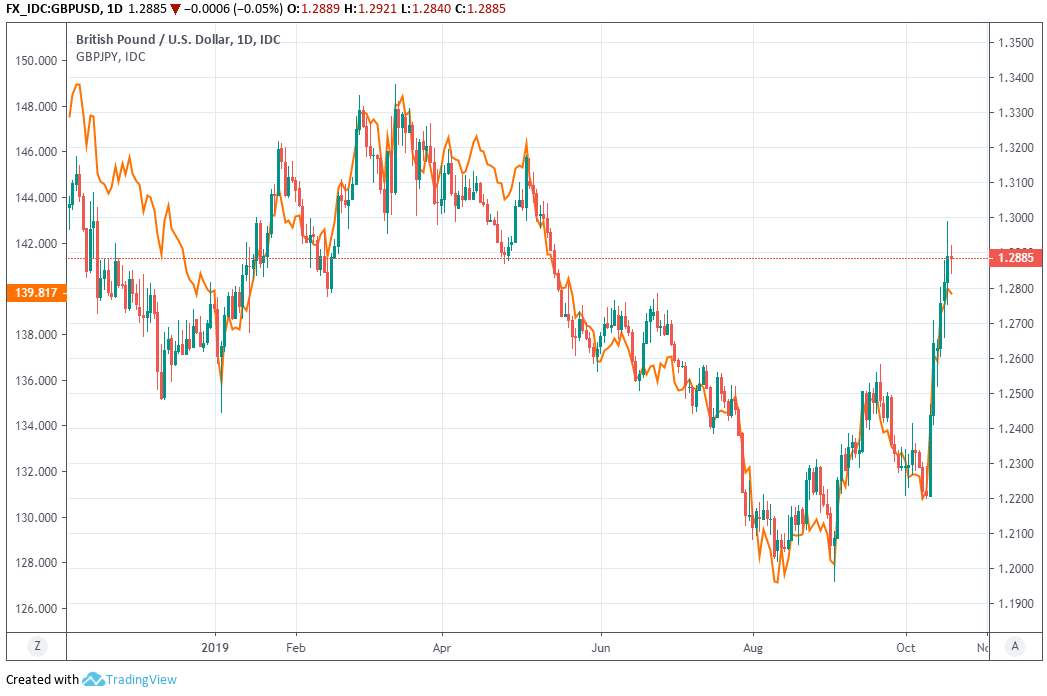 "There is an upside potential in the GBP from current level no matter what the outcome will be this weekend," says Richard Falkenhall, a strategist at SEB, in a note to clients Friday. "From a trading perspective, buying the GBP/USD is probably a better choice as volatility can be expected to be even higher given that the EUR/USD will react on the outcome as well."

The Pound-to-Euro pair is a 'cross' exchange rate that is, at its most basic level, a reflection of the two currencies' movements against the U.S. Dollar. It can be calculated at any point by dividing GBP/USD over the EUR/USD rate, with the implication being that movements in both are always amalgamated into the GBP/EUR rate.

In practice this mean the Pound has to rise further against the Dollar than the single currency does in order for the GBP/EUR rate to rise. Put differently; if the Euro-to-Dollar rate rises at the same time as the Pound-to-Dollar rate then, even if Sterling has risen by more than the Euro, the upward move in the Pound-to-Euro rate will be tempered to at least some extent. And the Euro does benefit from an ebbing of 'no deal' Brexit risk, albeit to a lesser extent.

"Would Parliament on the one hand accept the deal we should see the EUR/GBP trade down towards 0.8350 on Monday. Would Parliament on the other hand reject the deal or attach a confirmatory referendum to it, the government will be forced to ask the EU for an extension. This would open up new options going forward," Falkenhall says. "These should suggest that the joint probability the UK will remain an EU-member in the longer term has increased significantly, which ought to be positive." 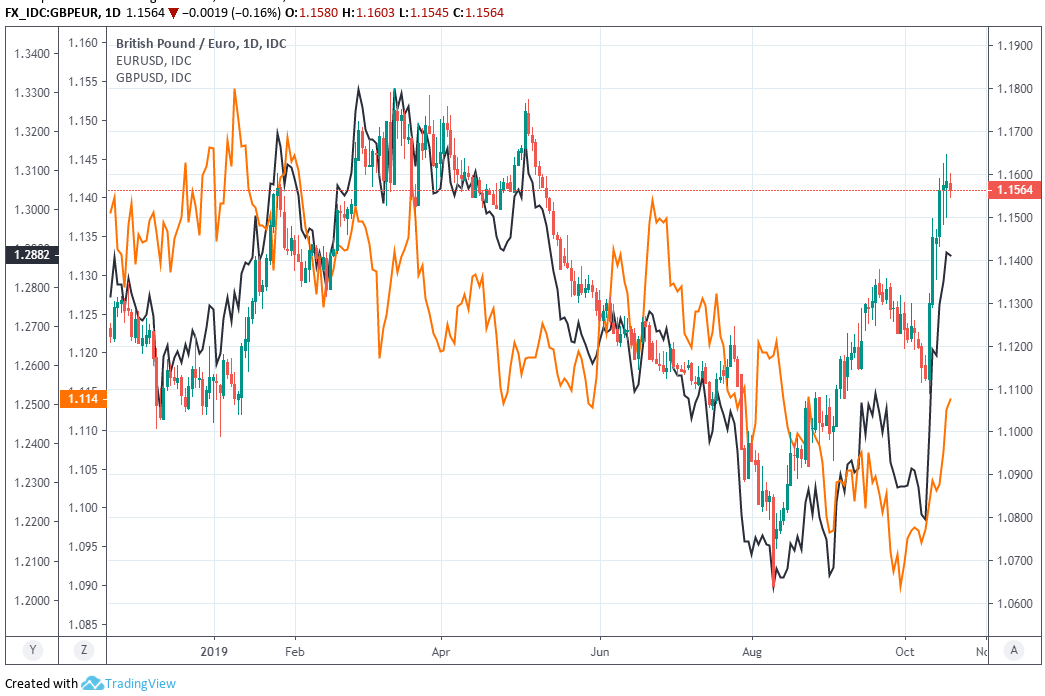 Above: Pound-to-Euro rate alongside GBP/USD (black line, on far left axis) and EUR/USD (organge line, on near left axis).

Falkenhall says a failure by Johnson to get his new Brexit deal through the House of Commons on Saturday, if it leads to a third delay of the Brexit process, would see the EUR/GBP rate fall to somewhere in between 0.84 and 0.85.

This is because even in the unlikely and unexpected event that EUR/USD remains at Friday's 1.1150 level next week, the Pound-to-Dollar rate would have to rise by at least a further five cents - to 1.3353 - in order for the Pound-to-Euro rate to achieve the 1.1975 level.

However, and in reality, Sterling will have to rise much further against the Dollar in order to get the GBP/EUR rate to the level that's tipped to prevail on a Brexit deal passing if the Euro is also rising at the same time. 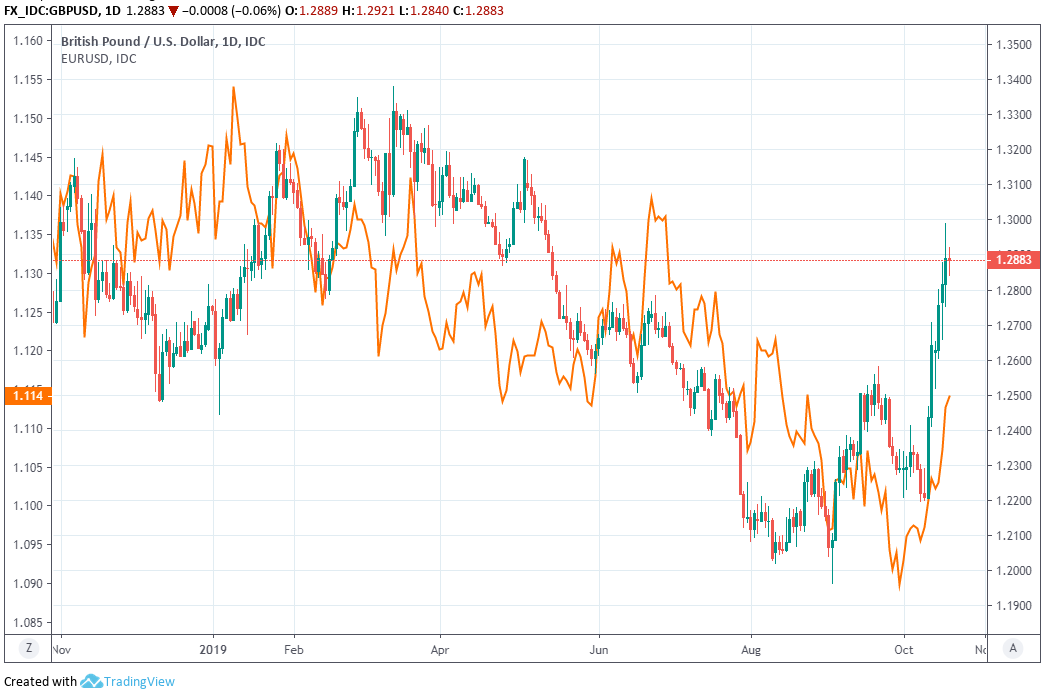