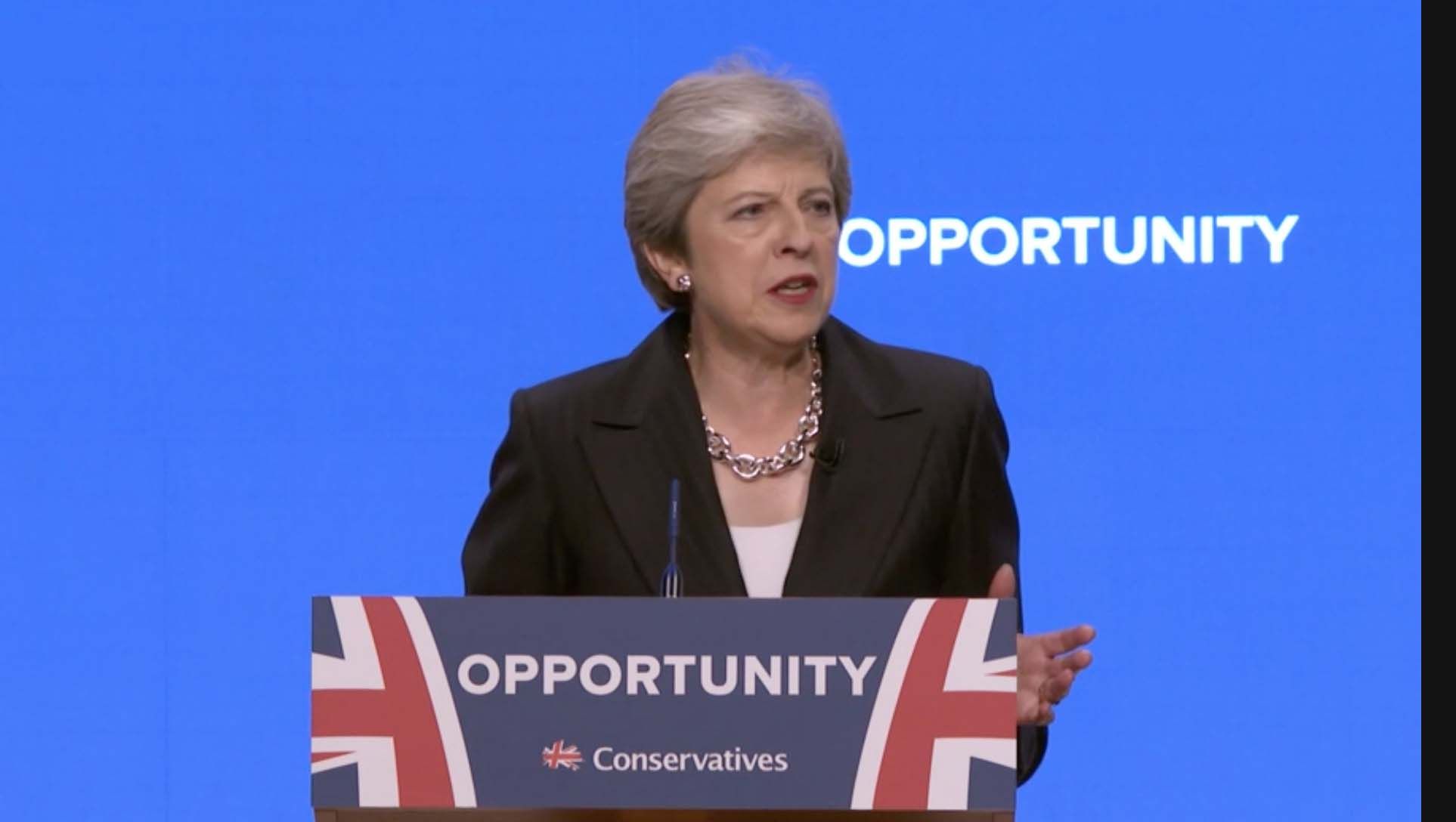 - Theresa May maintains stance on Brexit

Pound Sterling moved higher against a host of key currencies mid-week as markets expressed relief that Theresa May did not lob any new Brexit-shaped bombs their way as she closed off the Conservative party conference with a speech that appears to have gone down well with colleagues.

Heading into the Prime Minister's address to the Conservative party conference the Pound needed May to deliver a statesman-like, error-free and compelling speech, one that assures markets that they won't have to face the uncertainty of another general election and one that suggests May will ultimately prevail in pushing her Brexit plan across the line.

The boxes have been ticked: the Prime Minister looked relaxed, confident and importantly on the subject of Brexit no new shift in direction were announced and markets reckon the best option the U.K. has when it comes to securing a deal with the E.U. by year-end is to push the current plan.

"Those optimistic on GBP will be looking for a bit of a nothing speech delivered with some Churchillian poise (opposite of last year). That would probably inflict the least damage & keep May leadership concerns at bay. Any 'no confidence' talk not GBP helpful," says Viraj Patel, a foreign exchange analyst with ING Bank N.V.

The Pound fell sharply in response to the previous two post-referendum speeches to conference by May, and markets had been wary that May will be making it a hat-trick. The market's reaction confirms conference 2018 was, if anything, a Sterling-friendly affair. 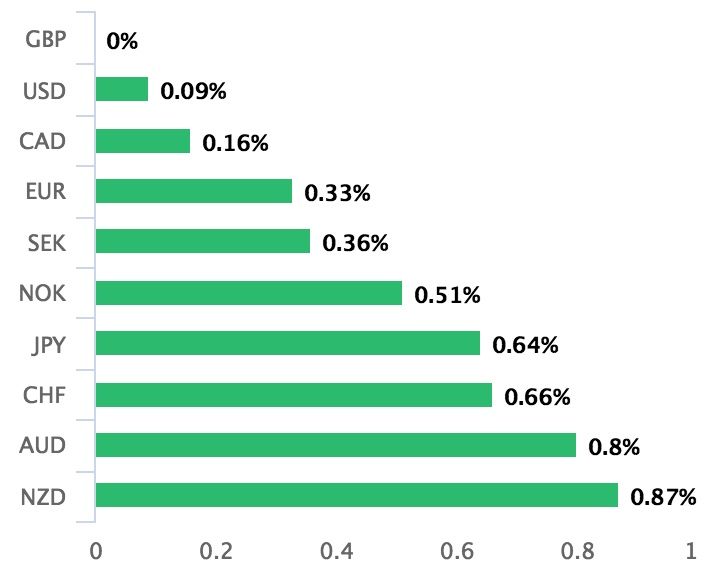 Above: Sterling's performance against the world's top 10 freely-traded currencies.

The Prime Minister hunkered down on her so-called Chequers Brexit plan; it appears the plea by Boris Johnson to "chuck Chequers" has not swayed May's course. To be sure, May did chuck Chequers in a way - she did not reference the word 'Chequers' once, instead she appears to be rebranding her plan simply as one the seeks to secure a fair trade deal.

This is wise as it deprives her Conservative party critics of a clear line of attack.

That May is standing her ground explains why Sterling is remarkably stable at the time of writing.

“In between dancing onto stage and criticising the Labour party, there was little fresh rhetoric today from Theresa May on her stance on Brexit. The market reaction was muted, and despite a small wobble, the Pound’s response was not as pronounced as we have seen in the last few weeks," says Hamish Muress, currency analyst at OFX.

May defends the plan as the only way to keep the U.K.'s borders open and protect just-in-time supply chains while also ensuring the Irish border remains unchanged. Her plans will therefore not allow the U.K. to be split into separate customs unions.

May confirmed that while "no one wants a good deal more than me, Britain isn't afraid to leave without a deal if we have to."

While leaving without a deal "would be a bad outcome", May says the resiliency of the British people will overcome any short-term challenges.

"I passionately believe our best days lie ahead of us," says May.

Importantly, May says Britain will retake its own seat at the World Trade Organisation; this suggests the Brexit she is planning will give the country a significant amount of independence on trade, and won't bind the U.K. to E.U. customs rules.

We had expected May to double-down on her Chequers plan - a plan that has suffered a troubled existence with the E.U. and members of her own party and her Northern Irish partners being opposed to its cornerstone proposal of seeking quasi-E.U. customs membership.

A host of foreign exchange strategists had recommended traders avoid the Pound this week owing to the potential volatility surrounding May's keynote speech, but we felt if May stuck to her plan then the Pound would navigate the day without hiccup.

The risks were May decided to announce a new, unexpected shift in direction on Brexit talks.

We have reported this week that the government might be preparing to cede ground on the Irish border question. While the broad outlines of the plans were rejected by Northern Ireland's Arlene Foster; we wondered whether May might try and sell a new vision in her conference speech.

This is arguably most important speech given by @theresa_may. She plants Conservative Party firmly in centre of politics, to fill the space she says @jeremycorbyn’s Labour has vacated. It shows, as I said on @NewsAtTen last night, she has no intention of quitting any time soon

Meanwhile, foreign exchange strategists that were betting against the Pound heading into the Conservative conference are looking to have been wrong-footed.

Sensing danger for Sterling was Andreas Steno Larsen of Nordea Markets who said he was advocating a 'sell' on the Pound versus the Euro heading into the Conservative party conference.

"We now decide to take profit on that short EUR/GBP bet and subsequently reverse it to a long EUR/GBP position ahead of Theresa May’s scheduled appearance at the Conservative party conference this week," said Larsen.

The analyst noted that in the last two years in a row EUR/GBP moved swiftly upwards on the day of Theresa Mays speech at the Conservative party conference, "and we bet that this year will be no different, as Theresa May has every incentive to sound like a Brexit-hawk at the conference to gather internal support," said Larsen.

But, the strategy appears to have been wrong-footed by May's speech.

However according to the latest consensus forecasts contained in a special report created by Horizon Currency, the exchange rate is still above where it is expected to be in three and six months from now, confirming sentiment concerning the outlook remains fragile.

"With the deadline for a Brexit agreement approaching and such a small government majority, volatility in the Pound will almost certainly increase as negotiations continue," says OFX's Muress.

All eyes now turn to a meeting of European leaders at a dinner on October 17 when they review the state of negotiations with the UK.

"In October we expect maximum progress and results in the Brexit talks. Then we will decide whether conditions are there to call an extraordinary summit in November to finalise and formalise the deal," European Council President Donald Tusk said at the Salzburg informal summit.

October was at one point the deadline for talks, but a new date in November was announced in Salzburg. But, as Tusk points out, the time for results are upon us. Expect market nerves to remain piqued over the next week.

"Brexit remains the key driver for the GBP and uncertainty related to the outcome is likely to keep the GBP volatile and undervalued in the coming months," says Mikael Olai Milhøj, a foreign exchange strategist with Danske Bank.

The Service PMI for September released by IHS Markit at 09:30 B.S.T. is typically a mainstay on Sterling's monthly data calendar but markets appear to have largely ignored the disappointing result.

The Service PMI for September read at 53.9, markets were looking for a reading of 54.0; the miss was marginal hence the Pound is more-or-less unmoved.

This came after both current activity levels and new orders grew at a slightly lesser pace in September than they had during the previous month.

However, new orders that did roll in have simply added to a preexisting backlog of uncompleted work, which will support the sector in the months ahead.

"The falls in the construction and services PMIs offset the large rise in the manufacturing survey, dragging the all-sector PMI down marginally from 54.2 to 54.1. This is consistent with quarterly GDP growth of around 0.5% or so in the third quarter – slightly up from 0.4% in Q2. Note too that if anything the surveys might be understating growth since the service sector PMI does not account for activity on the high street, which has been growing strongly in Q3 so far," says Thomas Pugh, a U.K. economist at Capital Economics.