The market is looking for a 75 basis point hike as the ECB seeks to act quickly on inflation, noting a short window of opportunity within which to do so before Eurozone growth slows and recession sets in.

But, economists at ING reckon the market is wrong to go with 75 basis points, which could prove the first major source of volatility for the Euro on the day.

"Policymakers in Frankfurt will likely have to choose between a 50bp or 75bp rate hike this week. We think that a 75bp move would be too hard to digest for the dovish front within the Governing Council, and our call is for a 50bp move," says Francesco Pesole, a foreign exchange strategist at ING.

ING's base case scenario sees a 50bp that would disappoint against market expectations, leading to a weaker Euro to Dollar exchange rate (EUR/USD).

This base case also sees the ECB lower their projections for Eurozone growth, eyeing a recession over the winter.

ECB projections also note that while elevated inflation will persist, it will start to ease over the outlook horizon.

EUR/USD would potentially fall to 0.98 if this scenario plays out, says ING. If you are concerned about EUR downside, consider locking in today's rates for use at a future date. 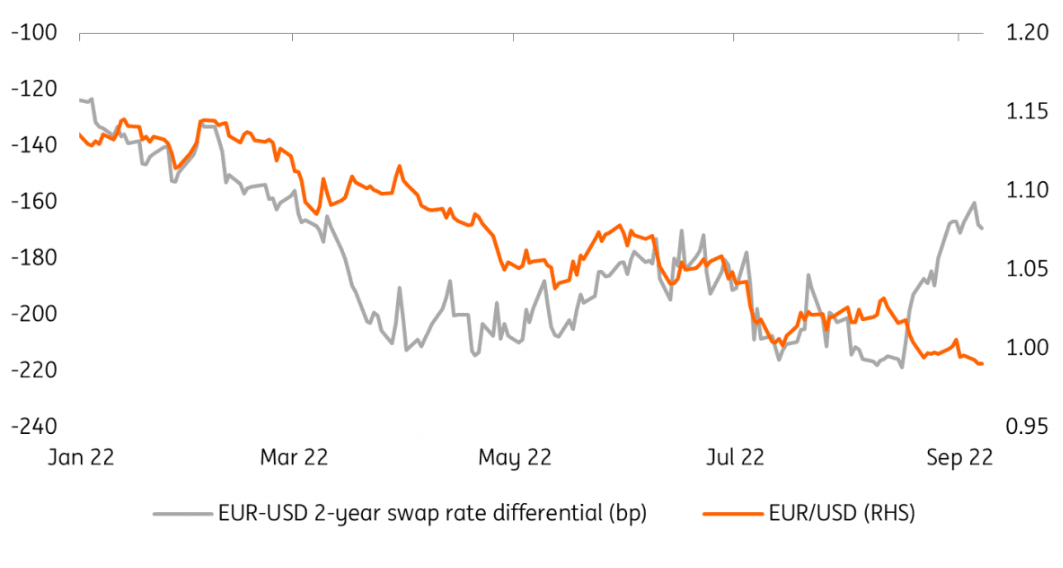 Above: Interest rates are not the key driver of EUR/USD at present says ING, instead energy market developments are driving the pair. Image courtesy of ING.

An even more 'dovish' stance would see the ECB deliver a 25bp hike as they consider the scale of the impending economic slowdown, which would be reflected in the central bank's downgraded GDP forecasts.

This dovish scenario would also entail inflation projections showing prices fall back to the 2.0% target over the forecast horizon. EUR/USD is forecast to trade near 0.96 under such a call.

But the ECB will be acutely aware of the consequences their decisions pose for the Euro: the weak Euro is itself an inflationary phenomenon as it raises the cost of commodity imports.

This is particularly unhelpful at a time of crisis caused by expensive gas and oil imports.

Staff forecasts show GDP will fall, but the brunt of the slowdown falls in the fourth quarter. Inflation is meanwhile predicted to remain elevated.

Here, the EUR/USD is forecast to test 1.00, keeping it in touch with current levels at the time of writing.

A 'very hawkish' scenario envisages the ECB hiking 75bp, or even 100bp, and signalling further 75bp or 50bp moves are likely over coming months.

Projections show now slowdown in growth is expected while inflation is seen to stay persistently above the 2.0% target over the forecast horizon.

ING would anticipate EUR/USD to move to 1.02 under such a scenario.

But ING says any initial moves could be faded quickly.

"Regardless of the direction of the EUR reaction on Thursday, there’s a non-negligible chance that the FX impact will prove rather short-lived. This is because EUR/USD has been blatantly unreactive to ECB rate expectations lately, as the energy crisis has continued to drive the majority of the pair’s moves," says Pesole.

"We expect the energy story to return firmly to the driving seat for EUR/USD after the post-ECB reaction. Barring a very hawkish surprise, this should keep EUR/USD below parity," he adds.