The Euro to Dollar rate eased lower in the final session of the week but its earlier three-day rally has painted a more favourable picture on the charts for the single currency and prompted some technical analysts to suggest it could be likely to draw dip buyers around the 1.1380 level.

Europe’s single currency notched up a hat-trick of gains that lifted it into the third spot in the major currency performance table for 2022 between Tuesday and Thursday this week, with the rally coming as the Dollar slipped across the board in what may have been a wave of profit-taking.

This advance took the single currency over and above its 55-day moving average at 1.1355, which had scuppered previous attempts at recovery in January, and saw the Euro to Dollar rate trading comfortably above 1.1400 throughout the latter half of the week.

“A six-week consolidation formed an ascending triangle bottom pattern. These patterns tend to be bullish in uptrends because the bottom of the triangle is rising (ascending). By rising it represented accumulation at higher lows. The market’s reaction to US CPI data caused the euro to rally and confirm the bottom pattern and tactical upside,” says Paul Ciana, chief technical strategist at BofA Global Research. 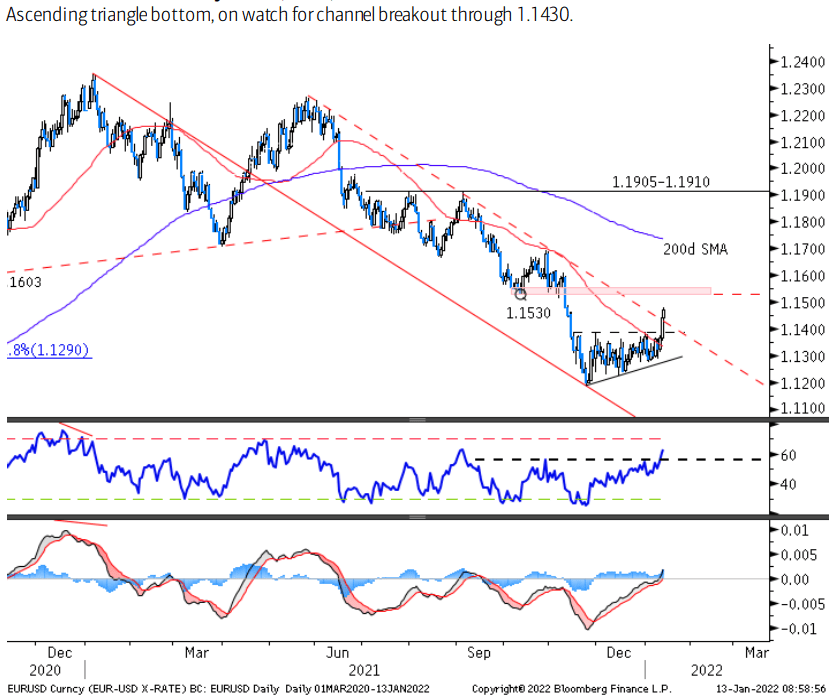 Ciana has flagged the 1.1430 level as pivotal to the short-term outlook for the Euro Dollar rate with a sustained rise above this threshold viewed as an indication that the recovery could extend further over the coming days and weeks.

That level marks a downward sloping trend line connecting the Euro-Dollar rate’s descending series of daily highs that dates back to the early days of 2021, although it also coincides closely with the 23.6% Fibonacci retracement of the accelerated down trend that began in June 2021.

The above-referenced accelerated decline was inspired by last June’s indication from the Federal Reserve (Fed) that it was contemplating a now underway withdrawal of the monetary stimulus provided since the opening months of 2020 and the onset of the coronavirus crisis.

This and the exceptionally supportive stance of European Central Bank (ECB) monetary policy is the fundamental basis for the accelerated decline seen in the Euro to Dollar rate during the second half of last year, and is why many analysts expect the exchange rate to fall further in 2022.

“We’ve explained the 1.12s is a technically reasonable place to speculate on a bottom in euro whether it be tactical or structural,” BofA’s Ciana says. 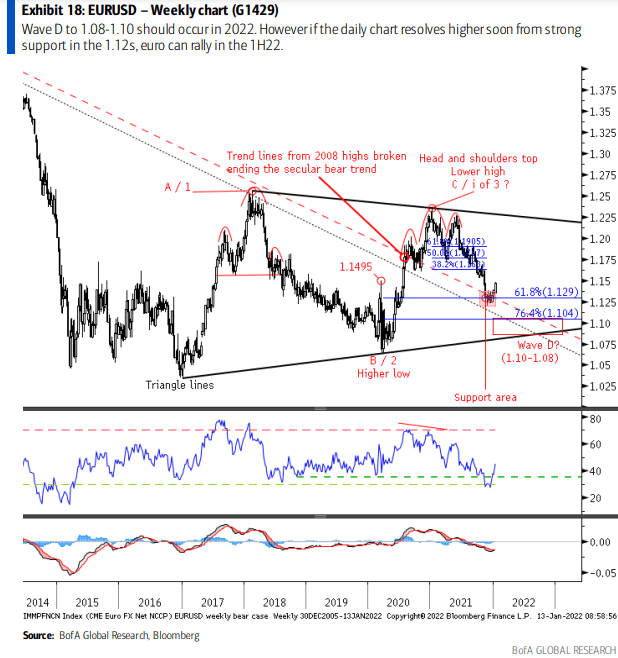 “The aforementioned ascending triangle bottom pattern confirms that this support matters, says euro can rally in Q1 and shifts our bearish medium-term view held since July 2021 to neutral,” Ciana and colleagues also wrote in a research briefing on Friday.

While this week’s rally has opened a momentary window for a short-term recovery by the Euro, which could be likely to build further if the single currency ends the week above 1.1430, this recently improved technical outlook would become null and void in the event of a fall back below 1.1280.

Ciana says any decline below that level would indicate that a resumption of the downtrend is likely and could turn his outlook back to bearish, bringing it into line again with the official BofA Global Research house view.

“Despite the recent rally, the macro outlook supports an even weaker EURUSD this year in our view. We also expect more divergence between ECB and Fed monetary policies than market expectations,” says Athanasios Vamvakidis, head of FX research and strategy at BofA Global Research.

“Two key assumptions in our EUR outlook are that Eurozone inflation will drop well below the target by the end of this year and that the ECB will stick to its new forward guidance, which the market doubts. We forecast EURUSD at 1.10 this year, appreciating back to 1.15 next year,” Vamvakidis also says. 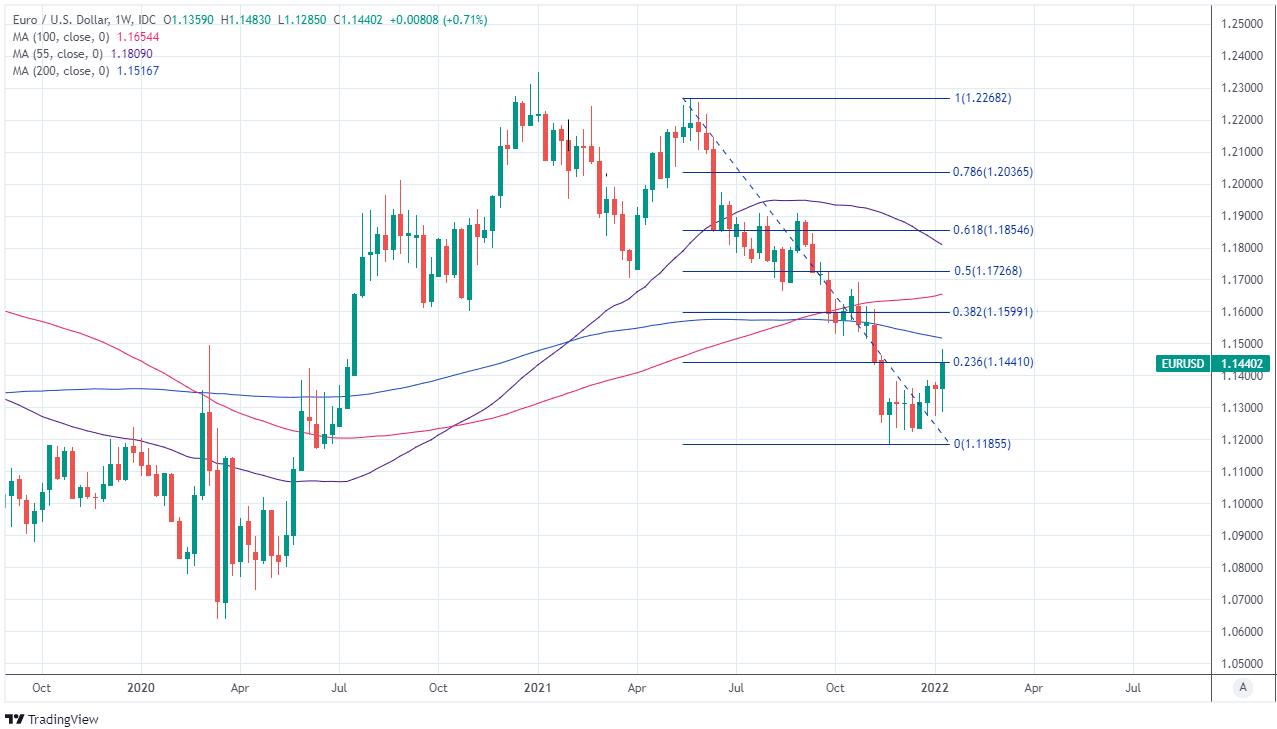 Above: Euro to Dollar rate shown at weekly intervals with major moving-averages and Fibonacci retracements of June 2021 decline indicating likely areas of technical resistance to any further recovery.