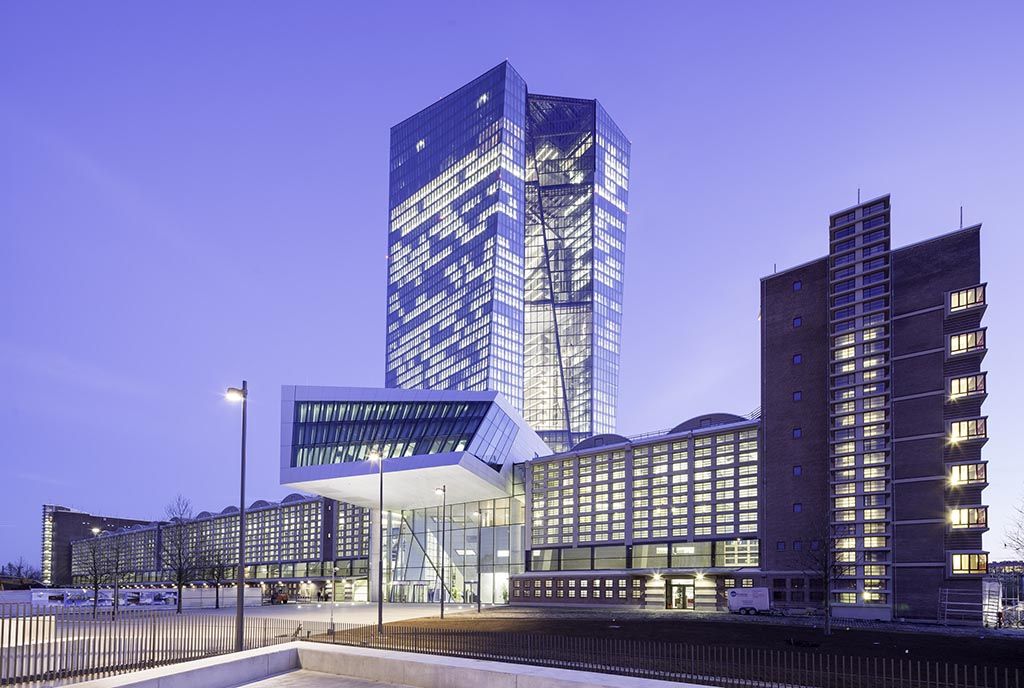 Europe's single currency was trading at 1.2113 and almost exactly the level that prevailed going into and coming out the other side of December's ECB decision, which saw the bank announce a €500bn extension to its pandemic-inspired quantitative easing programme.

ECB President Christine Lagarde will lead a press conference at 13:30 on Thursday, less than an hour after January's decision is unveiled, and it might not be a coincidence that the Euro-to-Dollar rate has beaten a retreat from 1.2350 and its highest level since early 2018 beforehand.

"EUR levels are not sufficiently high as to warrant any direct attention, especially given the recent pullback, which takes the EER -19 NEER back to levels seen first as long ago as July," says Shahab Jalinoos, head of FX strategy at Credit Suisse. "We suspect ECB chief Lagarde will use the occasion to signal a strong intent to support the financing of large -scale government debt creation in by the euro area at a time when near -term growth risks remain high and inflation expectations are still subdued."

The Euro's losses were most notable on Wednesday not only for their dispersion, which spanned the breadth of the major currency complex, but also because they came against a backdrop of surging stock markets and a continued rally in commodity currencies. 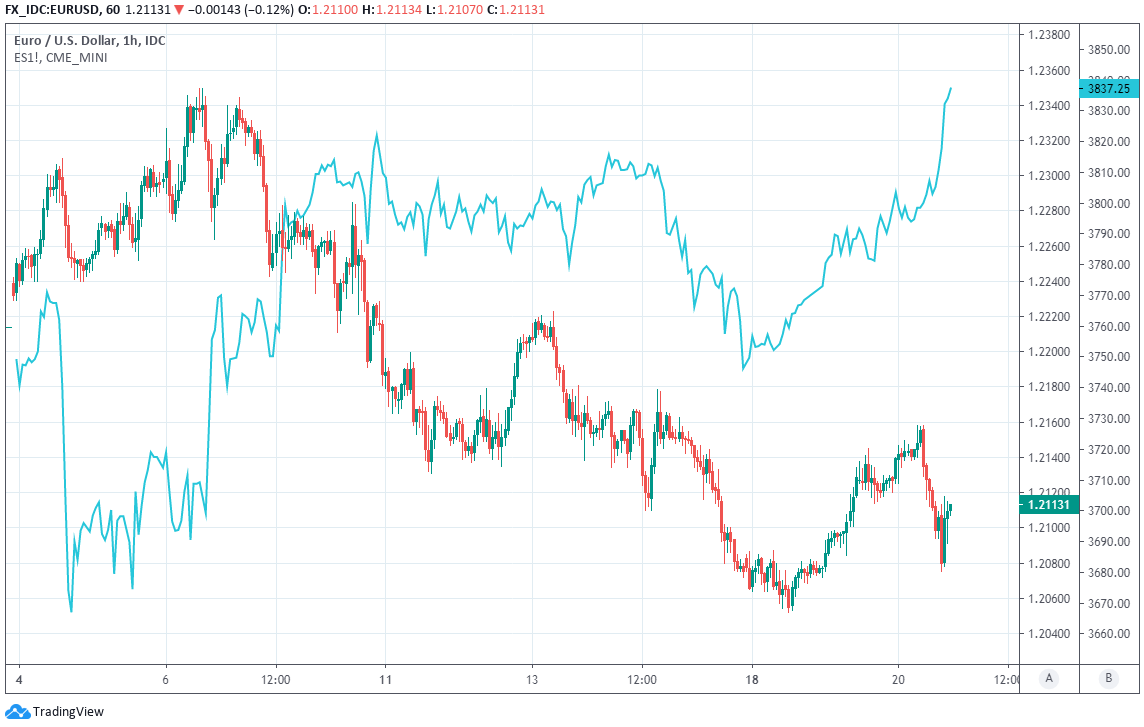 Typically EUR/USD has moved in lockstep with stocks and commodity currencies since early last year, so their deviation from that pattern on Wednesday was unusual and may have had roots in investors' unease about what ECB President Christine Lagarde might say at 13:30 on Thursday.

With ECB's Governing Council having allocated a total of €1.85 trillion in newly created Euros to the purchase of Eurozone government bonds as part of its pandemic-inspired quantitative easing programme, which was bolstered already last month, consensus looks for no further actions this week.

But with Wednesday's data from Eurostat data showing inflation remaining close to zero in December and the core rate of price growth stuck at -0.2%, Europe's long lost inflation pressures are likely to be top of mind for Lagarde.

"Purely from the level of the exchange rate today, there is no need for the ECB to over-react during the January meeting," says Petr Krpata, chief EMEA strategist for currencies and interest rates at ING. "Still, the ECB should reiterate that it monitors the exchange rate carefully, but for now, we don’t expect any tweak to the wording. Coupled with the change to policy instruments during the December meeting and what we see as a modest upside risk to the current ECB inflation forecast (which has in turn reduced an imminent need for the ECB to act), the scope for a surprise, which could meaningfully effect the euro, is limited in our view."

Persistent weakness in inflation could mean the Euro comes under fire for its role in reducing consumer prices, although analysts doubt the language used will be much different to that already deployed. A rallying Euro reduces the cost of imported goods and services and so too can reduce the consumer price inflation the ECB and its staff are charged with fostering.

Eurozone policymakers are mandated to deliver inflation of "close to, but below 2%" on average over the medium-term but have fallen a long way short of this target for the best part of a decade, which is why the ECB was the first in a now-growing number of central banks to have complained about currency strength.

"In recent weeks, policymakers in a wide range of economies (including Chile, Poland, Sweden, Israel, and India) have announced steps that, one way or another, amount to intervention in their foreign exchange markets. And it appears that the central banks of many Asian economies are continuing their long-standing practice of resisting currency appreciation by adding to their foreign exchange reserves," says Jonas Goltermann at Capital Economics.

The ECB has left its main refinancing rate, marginal lending rate and deposit facility rate unchanged at 0.00%, 0.25% and -0.50% respectively throughout the pandemic and committed to buying increased amounts of European government bonds in a bid to lift inflation by supporting the economy with ever lower financing costs of Eurozone companies and households even lower.

To that end the bank has also provided direct loans to commercial lenders at super low rates and has tilted its purchases of government bonds toward 'periphery' countries like Italy. Long established financial and economic pressures require the bank to do more and to work harder in relation to 'periphery' economies simply in order to ensure they receive the same benefit from its monetary policies as stronger countries and economies like Germany. Although this is politically contentious in some parts of the bloc.

"The ECB will be delighted with the rise in market implied inflation expectations over the last week, which look to reflect a spill-over from reflation prospects in the US. However, the central bank will want to pre-emptively make sure that any reflation expectation does not fast translate into an ECB exit narrative in market pricing, which would result in unwarranted tightening of financial conditions," says Nick Kounis, head of financial markets research at ABN Amro. 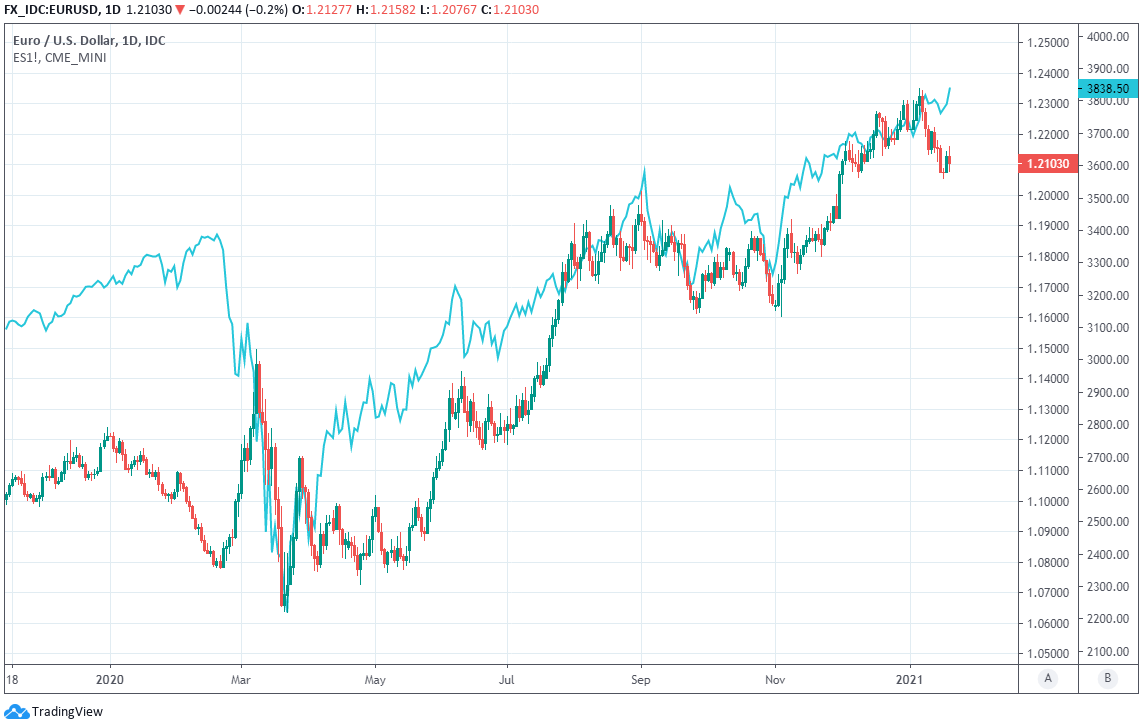 "Given recent trends in the euro, we do not think that the exchange rate is high up in terms of the issues facing the central bank," Kounis adds.

ECB chief economist Philip Lane said in early September that 2020's EUR/USD rally was a problem for the bank, although back then the single currency had not even broken above the 1.20 level. EUR/USD was trading around 1.21 at the time of the ECB's last meeting In December when Lagarde said only that "We will also continue to monitor developments in the exchange rate with regard to their possible implications for the medium-term inflation outlook."

However, since then and before Thursday's meeting began to loom over the horizon, Europe's single currency has attempted to reclaim higher levels while forecasts of 1.25 and above are widespread within the analyst community for 2021. This gives rise to the possibility that Lagarde may seek to further restrain the Euro this week, although it's not clear what the bank could actually do in order to reign in the currency, especially as gains are thought to be largely the result of falls in overvalued U.S. Dollar exchange rates.

"The foreign exchange rate has been a concern for the ECB over the past six months, with what seemed to be an uninterrupted rise in the trade weighted rate of exchange for the euro. However, this uptrend has now petered out and the EUR/USD has been globally stable since the December meeting," says Dirk Schumacher, head of European macro research at Natixis. 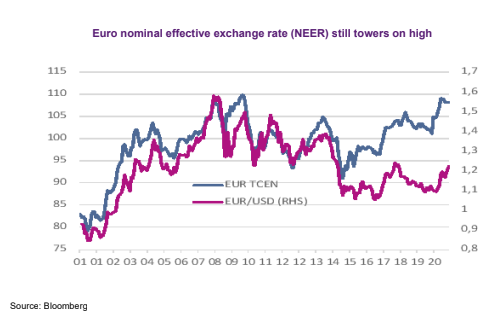 Above: Nominal and real effective exchange rates for the Eurozone. Source: Natixis.