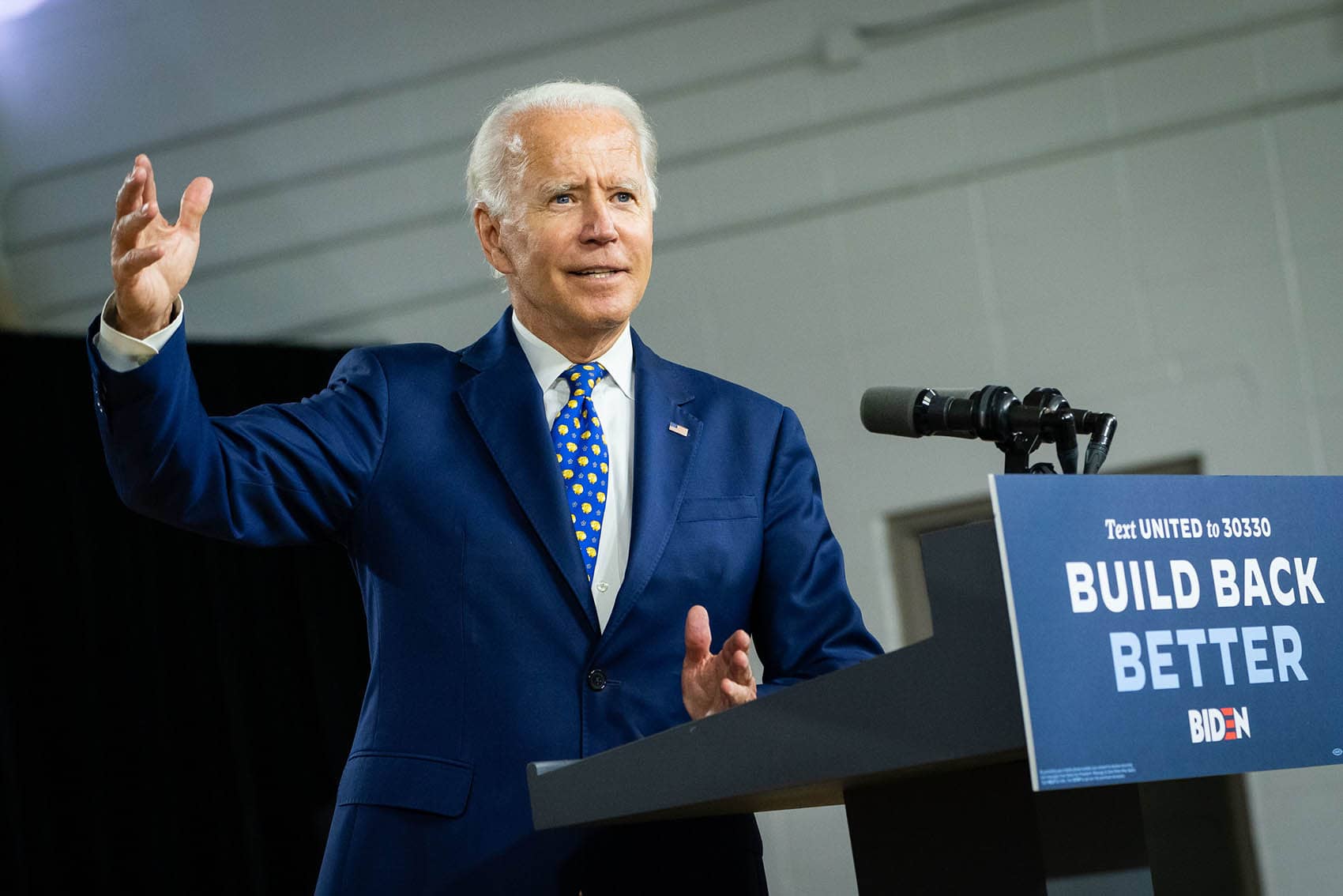 Biden has for some time maintained a commanding lead over Trump, but latest indicators suggest that not only has that lead stalled, it could be reversing.

The developments will prompt markets will be on the lookout for a repeat of 2016 when Hillary Clinton's commanding leads in polls and prediction markets proved little use in calling the final outcome that saw Donald Trump take the White House.

"With luck, we will know the result of the U.S. elections exactly two weeks from now, on the morning of 4 November. As it stands, Joe Biden remains the favourite to win. But on two of the three key metrics that we track regularly (betting odds and opinion polls), his lead over Donald Trump has narrowed somewhat," says Holger Schmieding, Economist at Berenberg Bank. "The experience of 2016 with a late rise in support for Trump in some key states followed by his upset victory over Hillary Clinton also suggests that the race remains open."

Schmieding's observations that the race is tightening is based on observations of bets covered by electionbettingsodds.com where the probability of a Biden win has declined to 60.5% from 65.3% on 12 October.

According to Schmieding, at the same stage of the 2016 election, betting markets had seen Hillary Clinton ahead of Trump with probabilities of 82.3% to 16.8%.

The average of opinion polls compiled by Realclearpolitics now shows an 8.6 point lead for Biden (51.1% versus 42.5% for Trump) after a 9.8 point lead on 12 October. 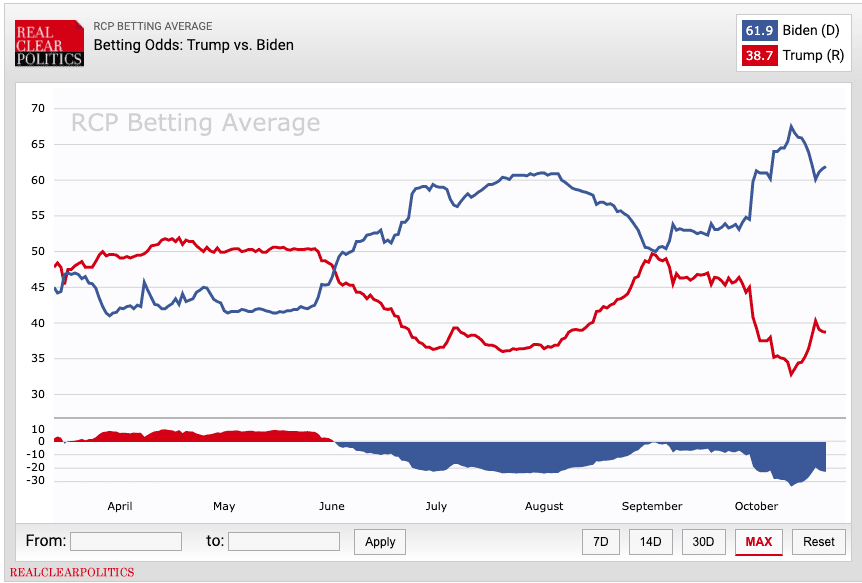 Markets have built up an assumption over recent weeks - based on polling, betting market odds and modelling - that Biden would comfortably take the White House, while the Democrats looked as though they were on course to overturn the Senate. Such an outcome would deliver a 'blue wave' where the White House and Senate would agree on a substantial stimulus programme in early 2021.

This is seen by economists and market participants as being broadly supportive of equity markets and negative for the U.S. Dollar outlook. (For a more comprehensive view on the Dollar and a blue wave outcome, please see our latest guide here, where we include views from leading investment banks including Goldman Sachs, JP Morgan and UBS).

The implications for markets of a tightening race for markets would be significant as it would increase levels of uncertainty heading into November. Rising uncertainty tends to be met with weaker stock markets and a stronger U.S. Dollar and other 'risk off' currencies such as the Yen and Swiss franc.

"The knee-jerk response to greater election uncertainty showed to be a classic risk-off of higher-beta underperformance vs reserve currencies including the USD, but a greater probability of a Blue Wave should highlight medium-term USD downside," says Daniel P Hui, a foreign exchange strategist at JP Morgan.

"A blue wave is already mostly priced in," says Andreas Steno Larsen, an economist with Nordea Bank, an observation that suggests the risks for stocks are to the downside and risks for the Dollar are to the upside if this assumption starts to be questioned.

"Bookmakers price the odds of a blue sweep with almost 80% implied probability, which is a hint that markets have already mostly baked in the news value of such a potential outcome. Bidens polling and the probability of a blue-sweep has been positively correlated to S&P 500, Commodities and negatively correlated to DXY, 10YR Treasuries and USD/CNH. The point is just that such a scenario is already priced in with a >80% probability, why the momentum in these trades could be running on fumes by now," adds Larsen.

At this point in time in the 2016 campaign Trump trailed Hillary Clinton by 5.1 points in the polls (43.2% to 48.3% according to Realclearpolitics) while 83% of the model simulations run by FiveThirtyEight had pointed to a victory for Clinton.

Current opinion polls show a wide dispersion depending on their source and methodology.

Berenberg's Schmieding says there are still lessons the market must take from 2016.

"In 2016, Trump’s victory came as a surprise. While the 2016 race had narrowed significantly in the final two weeks of the 2016 campaign, the Realclearpolitics average of national polls had still indicated a 3.2% lead for Clinton on the eve of the vote with 46.8% versus 43.6% for Trump. The final result with a 2.1% lead for Clinton had been within the usual margin of polling error. The real surprise was that state polls had underestimated support for Trump significantly in a few key swing states, allowing Trump to come ahead in the state-based electoral college despite losing the national vote," says Schmieding.

However, Realclearpolitics says this underestimation is unlikely to happen again in 2020 as pollsters have refined their method and now know where to look; in particular they are taking account of the correlation between education levels and support for Trump.

But, the economist warns investors to be wary of a new source of uncertainty - postal ballots.

In the age of Covid-19, more voters will cast their ballot by mail. While there is no evidence to support Trump’s allegations that postal voting is prone to fraud, the share of postal ballots that are disqualified because of a missing formality or a missed deadline is higher than in standard votes. This may potentially hurt the Democrats whose voters seem to be more wary of Covid-19 than many Republicans and who are thus more likely to vote by mail," says Schmieding.

Berenberg are wary of a 'red mirage' forming, where an apparent narrow win for Trump on election night in key swing states vanishes once postal ballots are counted.

A 'red mirage' or 'blue shift' is, "a very real phenomenon where Democratic candidates often gain votes as mail-in ballots get counted after Election Day. And this gap could be even wider this year," says Marshal Cohen, writing for CNN.

A narrow lead for Trump before postal ballots are fully counted could "give rise to serious and extended legal complications that may ultimately have to be settled by the Supreme Court if the Republicans try to stop the full count of postal ballots," says Schmieding.

In short, Trump and his supporters would likely resist an outcome where a traditional vote count giving him the edge is overturned by postal ballots.

This outcome would present a worst-case scenario for markets and lead to large losses for stock markets and gains for the U.S. Dollar.

However, such a contested outcome is not a clear cut win for the Dollar argues Brian Daingerfield, a foreign exchange strategist at Natwest Markets.

It is something of a win-win for the Euro with Natwest Markets who see the single currency outperforming not only on a contested election result, but also if the market's base-case expectation for a 'blue wave' is realised.

"We argued that EUR/USD could be a winner in our U.S. election base-case scenario. With the election acting a catalyst for a weaker USD in our view, we continue to favour holding the position," says Daingerfield. EUR/USD would go higher under a Biden win due to the following two scenarios:

"Europe could be a beneficiary of a relative loss of competitiveness of US corporations as markets price the risk of higher business taxes, higher capital gains taxes, and a stricter regulatory environment.

"We expect a full reset in US/EU relations under Biden. A return toward Obama-era multilateralism implies tightening economic linkages with Europe, rather than pursuing trade wars."