- Optics of fight over corona bonds could bite EUR further out.

The Euro-to-Dollar rate recovery off last week's lows was called to a halt Wednesday by bad politics at the Eurozone finance minister table, which are stoking existential risks to a single currency that is currently attempting to neutralise bearish signals coming off the charts.

Europe's single currency had recovered its footing this week and was climbing from earlier lows when Tuesday's 14-hour meeting of Eurozone finance ministers failed to produce an agreement supporting a common fiscal response to coronavirus crisis that's increasingly being brought under control in some countries, but which will continue to impose heavy costs on European economies for some time to come.

The old continent's various leaders often assert that no country can address the modern world's greatest challenges alone, and normally before they go on to extol the perceived virtues of collective organisation and action at the international level. But standing alone each of them are amid the coronavirus crisis, which poses the single largest threat to the continent's health and economies since at least the second world war. National governments have put unprecedented support packages on the table for households, companies and economies but the collective response has been limited to tinkering with common rules and a small beer repurposing of existing EU budget cash. 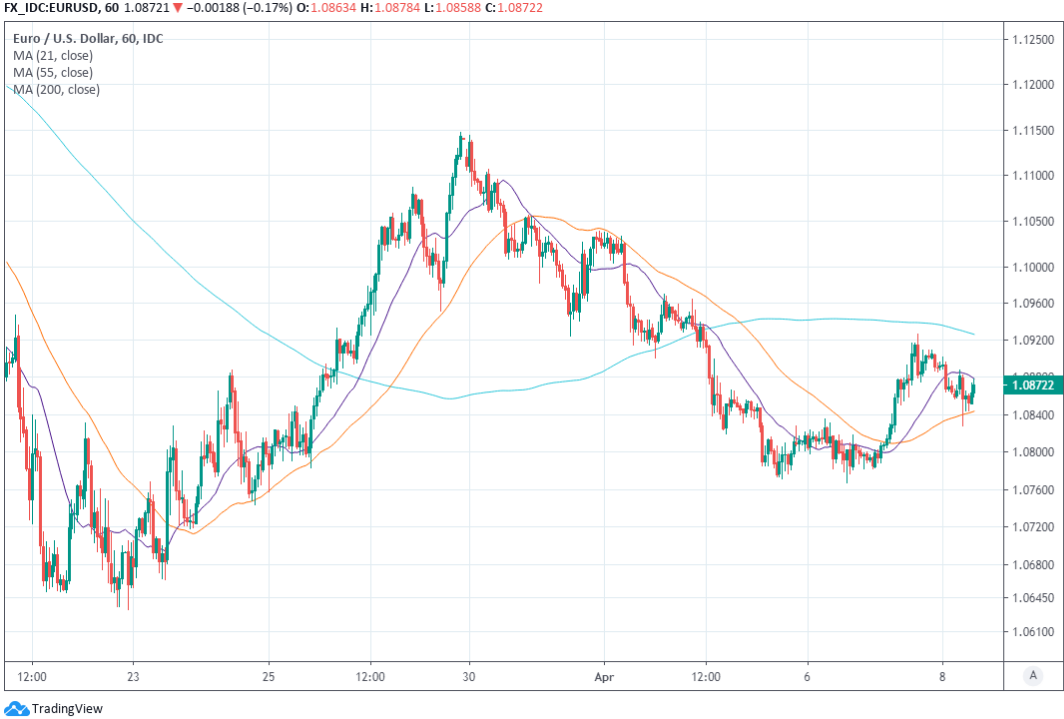 "The euro is under-performing today and for good reason. The speed of the COVID19 crisis on the real economy has been so brutally fast that it requires a rapid policy response. On an EU-wide perspective that has not been forthcoming. As we’ve come to expect, the ECB has responded rapidly and individual countries have responded but there has been little on an EU-wide perspective. Yesterday was a chance to change that," says Derek Halpenny, head of research, global markets EMEA and international securities at MUFG.

Eurozone finance ministers began another day of virtual meetings on Wednesday that will continue up to Friday's early weekend and could yet produce an endorsement for a collective fiscal response. But first the various ministers will need to agree on a form of debt mutualisation, a Holy Grail not only for Italians and other Southern European nations who suffer from what is for them a chronically overvalued currency, but also for many advocates of European integration as well as critics of the single currency as it stands.

Central and North European concerns about a profligate 'periphery' have stymied debt mutualisation throughout the life of the Euro - a mutualised currency that's cost some nations dearly while rewarding others immensely - and appeared to do so again this week. It's the politics of this lopsided trade off, rearing their heads again after years of Euro-induced austerity and as the crippling financial cost of coronavirus containment measures mount, that is now threatening to revive an existential threat to the Euro.

"The political signal matters more than any technical detail of how exactly Eurozone sovereign debt ends up on the ECB’s balance sheet," says Holger Schmieding, chief economist at Berenberg. "The way in which the EU and the Eurozone are perceived to react to the unprecedented emergency of the Covid-19 pandemic can shape attitudes to European integration for decades to come. Visible solidarity could strengthen the European project, a perceived lack of such solidarity could undermine the political foundations of the project instead." 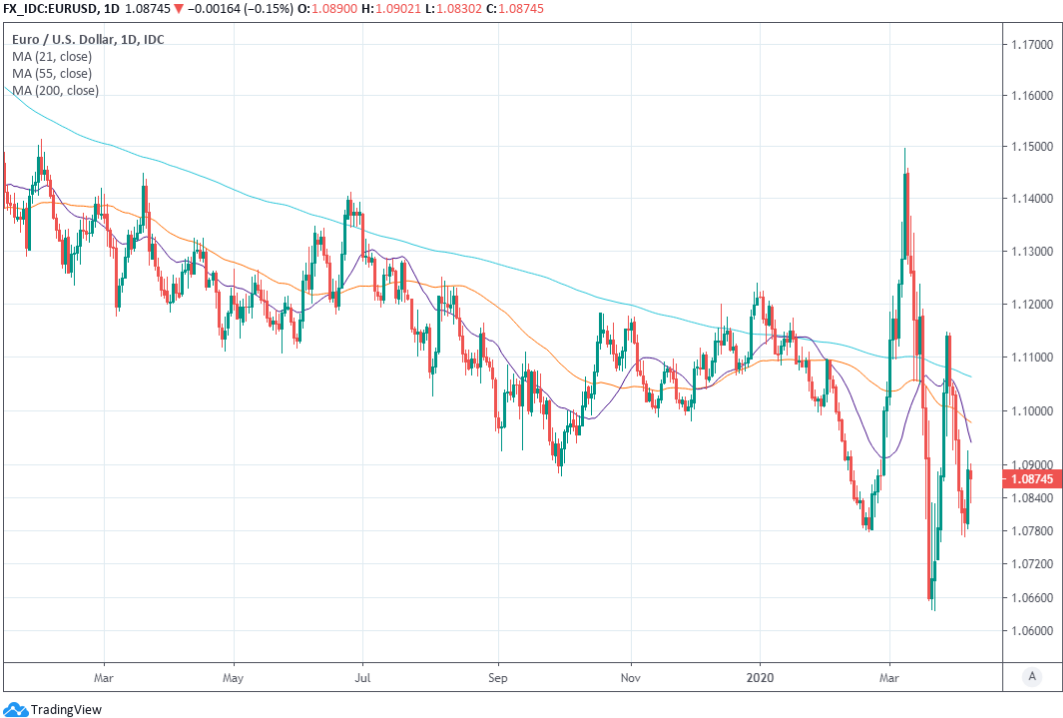 Debt-laden and austerity ridden countries like Italy, Spain and France have suffered the most severe outbreaks of coronavirus in the Eurozone, leading to significant economic costs for those who can least afford it. Economic costs that could easily become political regardless of whether or not they are included or excluded from the relevant calculations when the EU's stability and growth pact is eventually reimposed on Eurozone members further down the line. Those countries are led by advocates of European integration who're in some cases besieged at the national level by opponents of the project and they will face elections within the next two-to-three years.

"No one has ever made money betting on Germans softening their stance on debt mutualization. Attitudes may be softening, but you still need 2/3rds of the Bundestag to approve a new debt instrument like the 'coronabond'," says Bipan Rai, North American head of FX strategy at CIBC Capital Markets.

When the stability and growth pact returns and once the election campaigns have come around, the European response to the coronavirus crisis or lack of it will loiter in the background and might have significant consequences for the path ahead for Europe's politicians and single currrency. Some of those politicians have received more assistance from Beijing than they have Brussels amid the coronavirus crisis, a poignant point best illustrated by China's sale of surgical masks to Italy which took place at a time when restrictions on the export of masks from Germany (and others) were hampering deliveries to other members of the European Union single market.

"Even if a deal is finally reached, as it probably will, the noisy way in which it would have come about is dangerous in itself. The loud dispute threatens to overshadow the substance, making it more difficult for national leaders to finally present the result at home as impressive solidarity in action to shape their domestic public debate," warns Berenberg's Schmieding. "The prospect that Italy may eventually leave the EU and the euro remains remote. After all, Italy needs ECB support more than ever before. But the tail risk that – some years from now – dangerous right-wing populists could win a political majority in Italy and pursue such an idea could soon be less slim." 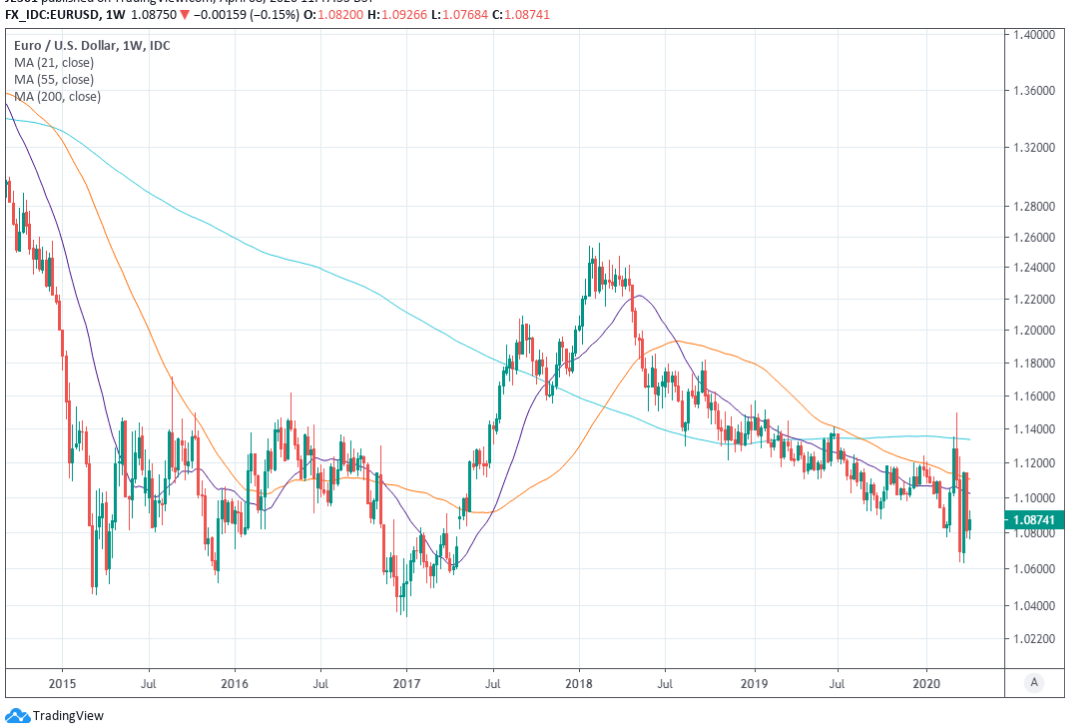 President Marine Le Pen would be inaugurated before any Prime Minister Matteo Salvini, although both could be becoming more likely now that Europe's unity has vacated the senate floor and in its place stands a collection of national leaders who're each seeking to protect or enhance familiar self interests at a time when the need for collective action has never been larger. But Berenberg's Schmieding, CIBC's Rai and MUFG's Halpenny are hopeful that talks will help produce an agreement Wednesday or Thursday which provides one form or another of collectively underwritten financing to aid the coronavirus fight and protect economies from lasting damage.

Any agreement could provide substantial support to the Euro in the short-term while also sowing the seeds of a broader and longer-lived recovery from years of declines. But in the meantime, an absence of solidarity at the European table could weigh heavily on the Euro, ensuring it lacks the momentum necessary to overcome several technical obstacles to the upside on the charts.

"EUR/USD has held the initial test of 1.0778/73, the mid February low and has seen a sizeable rebound, but so far remains contained by the accelerated downtrend at 1.0980. It looks likely to range near term," says Karen Jones, head of technical analysis for currencies, commodities and bonds at Commerzbank. "The market will find initial resistance at the accelerated downtrend at 1.0980 ahead of the 61.8% retracement at 1.1148/67 and while capped here will remain offered...Above 1.1167 will open the path to December, January and March 16 highs at 1.1224/40. This area guards the 1.1495 March high." 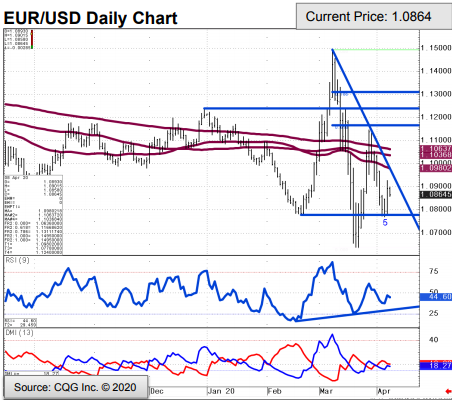