- Comes on top of increased tariffs in Airbus WTO dispute.

- And as markets grow sceptical again on U.S.-China talks.

The Euro was stopped in its tracks during the overnight session by a U.S. retaliation against France's new digital services tax (DST) and could struggle over the coming days as overhead resistance on the charts is set to bar the single currency's path to the upside, according to some strategists.

The Office of the United States Trade Representative (USTR) said late Monday that France's new tax on online sales discriminates against U.S. companies, is inconsistent with some international tax conventions and "unusually burdensome" for those U.S. firms effected by it.

The trade representative has recommended tariffs of up to 100% be applied to imports of French goods worth some $2.4 bn each year. However, Presidents Donald Trump and Emmanuel Macron expressed confidence at a NATO summit in London that differences over the tax and other issues can be resolved.

"The Section 301 committee will hold a public hearing beginning at 9:30 AM on January 7, 2020 regarding proposed action to be taken," the U.S. trade representative said. "USTR expects to proceed expeditiously thereafter."

American firms and members of the public now have until January 06 to submit their comments on the proposals before a public hearing is held on January 07.

"Despite the US (a) re-imposing tariffs on Argentina and Brazil steel exports; and (b) threatening tariffs on French goods, cyclical and higher beta G10 currencies are not under pressure, with the soft US data (Nov US Manufacturing ISM) weakening the dollar," sas Petr Krapata, chief EMEA strategist for FX and bonds at ING, in a morning research note. "We see a limited upside to EUR/USD from here, with the cross struggling to break the 1.1100 resistance level today." 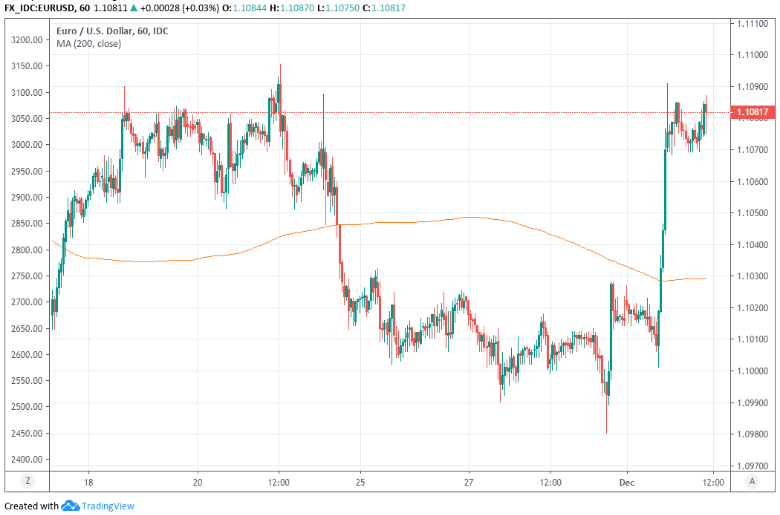 The U.S. response to the French digial tax came on same evening it also responded to latest World Trade Organization ruling in a long-running dispute between Washington and Brussels over EU subsidies for Airbus, which is one quarter owned by the governments of Germany, France and Spain. The U.S. has succesfully argued that EU government support for Airbus is illegal under WTO rules and that it's cost American companies lost revenue.

American trade officials said Monday they will now begin the process of increasing existing tariff rates on some EU goods and identifying new products to impose new levies upon. The U.S. already targeted European exports of agricultural goods, airplanes and Scotch whisky in October after the WTO estimated lost revenue for American companies to be around $7.5 bn. The EU has said the new WTO ruling is not basis for further U.S. tariffs.

Monday's trade actions came after the lapsation of a mid-November deadline for a U.S. decision on whether to impose tariffs on EU exports of cars. President Donald Trump had threatened levies of up to 25% over allegedly unfair European trade policies, which the USTR found to pose a threat to U.S. national security, although the deadline passed without any action being announced.

Manufacturers are being held back by the strong Dollar, which is being propped up by the ridiculous policies of the Federal Reserve - Which has called interest rates and quantitative tightening wrong from the first days of Jay Powell! 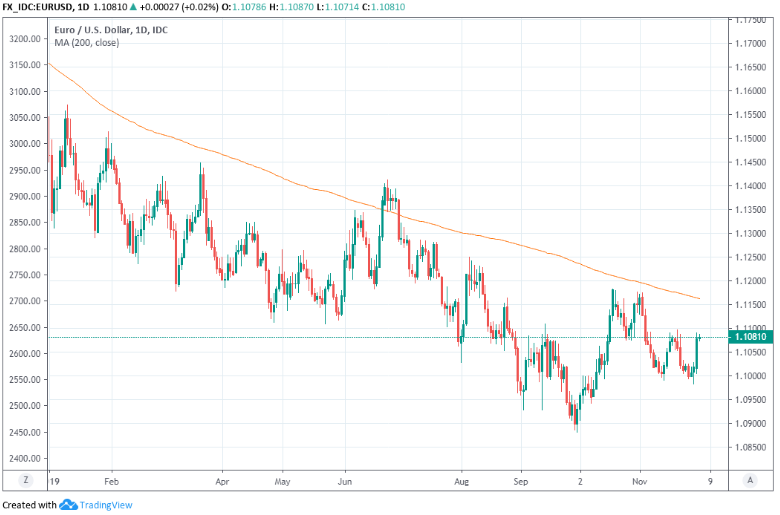 "What we are seeing is the weaponization of trade and using it for diplomatic purposes. It is no coincidence that these announcements come as Trump lands in London for the Nato summit and a chance to demand European allies spend more on defence. It will also draw attention away from the Chinese talks, which clearly are not yielding the necessary outcome as far as the White House is concerned," says Mark Wilson, chief market analyst at markets.com. "It’s a clear signal to Beijing that Trump is not shying away from tariffs – as he said yesterday – if there is no phase one deal the tariffs will go up."

The Euro had rallied into the evening session Monday after the influential Institute for Supply Management manufacturing PMI surprised on the downside for November, leading economists to suggest the recent rebound in the barometer was just a temporary phenomenon. However, the single currency was stopped in its tracks by the USTR statement in the evening hours.

Source told Global Times that China will release an "unreliable entity list" soon, which includes relevant US entities. US House is expected to pass a Xinjiang-related bill that will harm Chinese firms’ interests, prompting China to speed up the move.

"Global markets appear to be waking up to the US/China trade war charade and are going “risk-off”.  The S&P futures, Chinese yuan and USDJPY continue lower today, with US 10yr yields finally catching up to the downside.  The commodity currencies, AUD and CAD, are faltering as we head into NY trade," says Eric Bregar, head of FX strategy at Exchange Bank of Canada.

Unease between the U.S. and Europe comes with financial markets in all-out risk-off mode after President Donald Trump appeared to kick the prospect of a 'phase one deal' with China into the long grass of 2020. 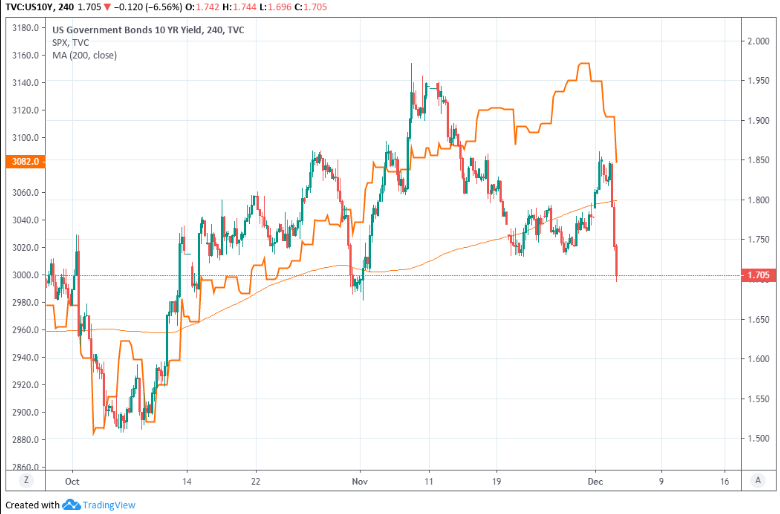 Europe's unified unit was up 0.10% against the Dollar in noon trading Tuesday, with unease over the outlook for the U.S.-China trade talks also at work on exchange rates. President Donald Trump and Commerce Secretary Wilbur Ross both appeared to kick the prospect of a 'phase one deal' into the long grass of 2020 Tuesday, with Trump saying at the NATO conference "it could be better" to wait until after the November 2020 election to do a deal.

Both the President and the Commerce Secretary also said December 15 will still see tariffs imposed on all of China's remaining annual exports to the U.S. unless a deal is agreed by then, stoking fears about a renewed flare up of the tariff conflict and another blow to the economy. Europe's economy has arguably been injured more severely by the U.S.-China trade fight than most countries.

"The euro weakened back below the 1.1000 level in November and it certainly looked like carry appetite returned with a vengeance. Volatility in the FX market fell notably in November and hence low or negative yielding currencies underperformed. The Australian dollar was the worst performing G10 currency reflecting a bigger shift lower in its rates curve but then EUR, JPY and CHF were the next weakest currencies," says Derek Halpenny, head of research, global markets EMEA and international securities at MUFG. "Negative yields encourage the use of the euro as a funding currency for carry and for hedging related to sales of EUR exposure."

The Euro may have found support Tuesday due to the sell-off in emerging market currencies that was incited by the U.S. trade rhetoric and actions. It has increasingly been been used by investors as a 'funding currency', which sees investors borrow cheap Euros and then swap them for higher-yielding emerging market rivals, because of the single currency's super low interest rates.

That's seen the Euro under pressure ever since October 11 when Trump first claimed to have struck a phase one deal, because the calm prompted by those claims led financial asset prices to trade within narrow ranges the world over which makes fertile ground for so-called 'carry traders'. However, there's a flip side to this development in that when volatility returns to markets and investors are sent scrambling to exit their emerging market bets they're left with little choice other than to buy the Euro back.