- EUR at risk of further declines this week on data and politics.

The Euro-to-Dollar exchange rate trod water in a risk-off market through much of Monday, as investors responded to poor economic figures from the continent while also expressing concerns over the merits of looming talks between the U.S. and China, but analysts are tipping the single currency for losses up ahead.

Financial markets were an inhospitable place for so-called risk assets at the opening bell Monday, as well as for assets that are sensitivite to the U.S.-China trade war, after Bloomberg News reported that Chinese officials have narrowed the scope of the agreement they might be willing to consider in talks with U.S. counterparts this week. But fresh signs of weakness in the Eurozone were also at play after Destatis said German factory orders fell 0.6% in August.

"EUR/USD edged down during the European session on USD strength and poor Eurozone economic activity.German factory orders fell more than expected in August," says Elias Haddad, a strategist at Commonwealth Bank of Australia. "In our view, EUR/USD will continue to trade heavy near the lower-end of its medium term 1.09-1.12 range. A deeper contraction in German industrial production in August Tuesday would validate the ECB's open-ended "highly accomadative stance" and weigh on EUR/USD." 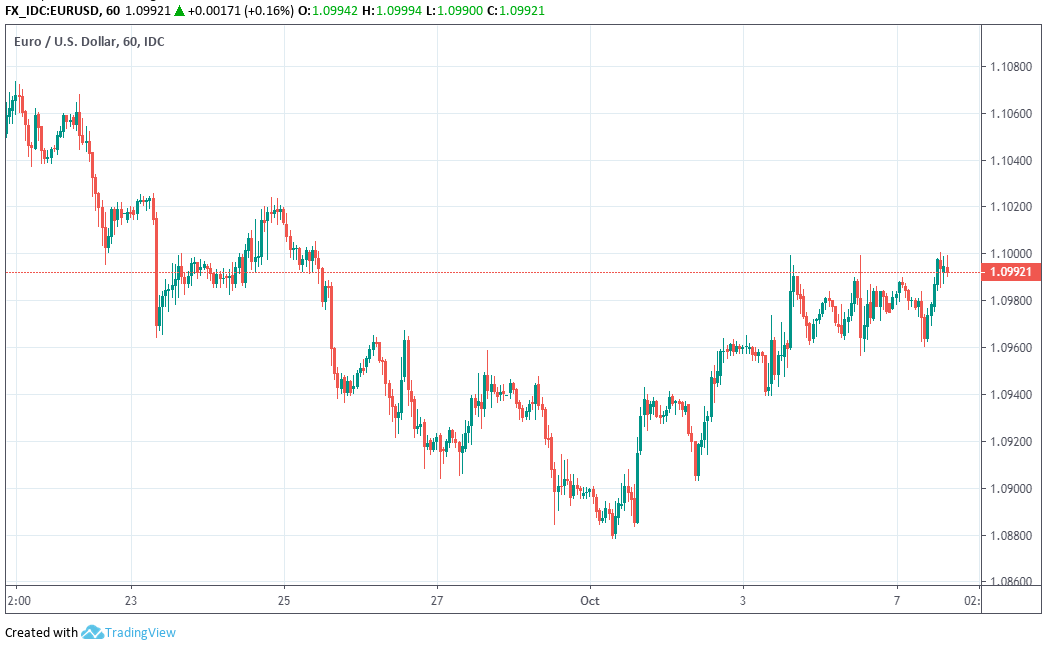 August's German industrial production data are due out on Thursday and will reveal whether the German factory recession continued deep into the third quarter. That question itself is key to whether the broader economy, which is the Eurozone's economic engine, also fell into recession last quarter. If it did then markets could soon come to fear that an all-out Eurozone recession might not be far off, which would be problematic for the single currency.

Signs of further weakness would vindicate the European Central Bank (ECB) for its September decision to cut the deposit rate, which is one its three key interest rates, further below zero and to restart the recently-shuttered quantitative easing program back in September. The ECB is again providing significant stimulus to the Eurozone economy in the hope of one day meeting its inflation target by using lower borrowing costs to stoke faster economic growth.

"Deep challenges in Europe and Asia now mean that it will be Washington’s job to make the dollar weaker - either through trade conciliation or the Federal Reserve shifting to a full-on easing cycle. Neither of those outcomes look immediate, meaning that the risk environment could well deteriorate into year-end," says Chris Turner, head of FX strategy at ING. "All this means that EUR/USD should languish in the 1.05-1.10 range into year-end as the European slowdown broadens from the manufacturing to the service sector and the ECB resumes quantitative easing. The likelihood that the Brexit deadline is extended until next March means no resolution here either." 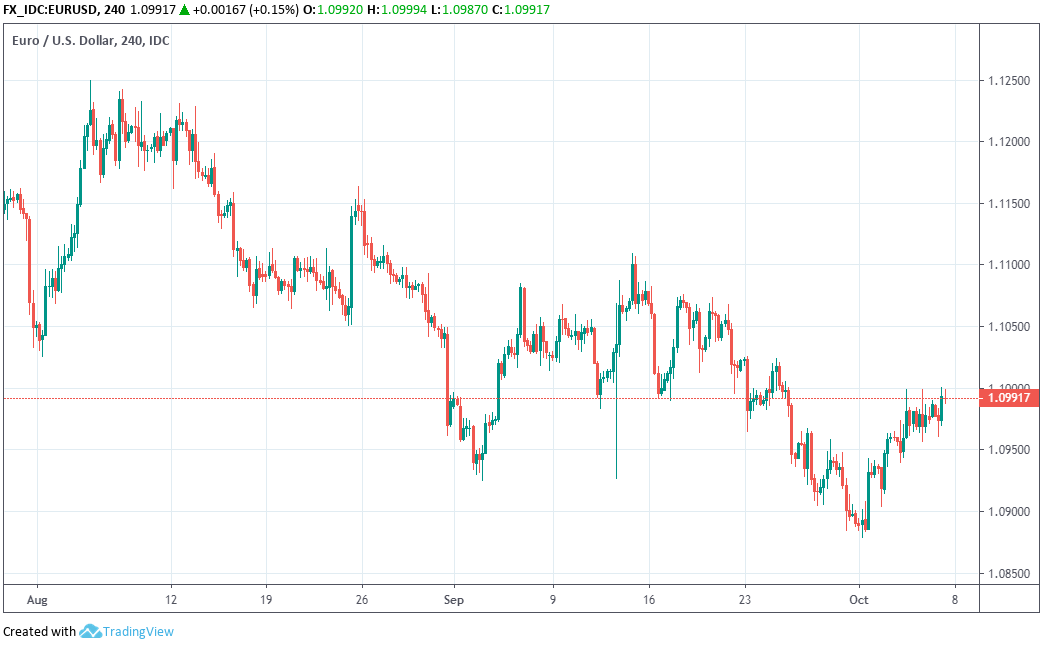 Markets are contemplating the Eurozone outlook just as U.S. and Chinese officials prepare to meet in Washington Thursday in the hope of striking a deal that at least averts two tariff increases planned for the months ahead. Such a deal would potentially spare the world from another escalation of the 18-month trade fight that's already sent the global and Eurozone economies into retreat.

However, Bloomberg says China is unwilling to discuss state subsidies of commercial industries and non-tariff barriers, both key gripes of President Donald Trump, which the White House claims give the world's second largest economy an "unfair" edge international market for goods. Those subsidies and the non-tariff barriers that make minority shareholders of most foreign companies setting up in China, are the main reasons the White House has clobbered Chinese exports to the U.S with tariffs.

"There should be no surprise on the Chinese refusal to address its structural economic model: that is something I have reiterated would be the case time and again, and is the key reason why we do not expect a real deal to be done," says Michael Every, a strategist at Rabobank. 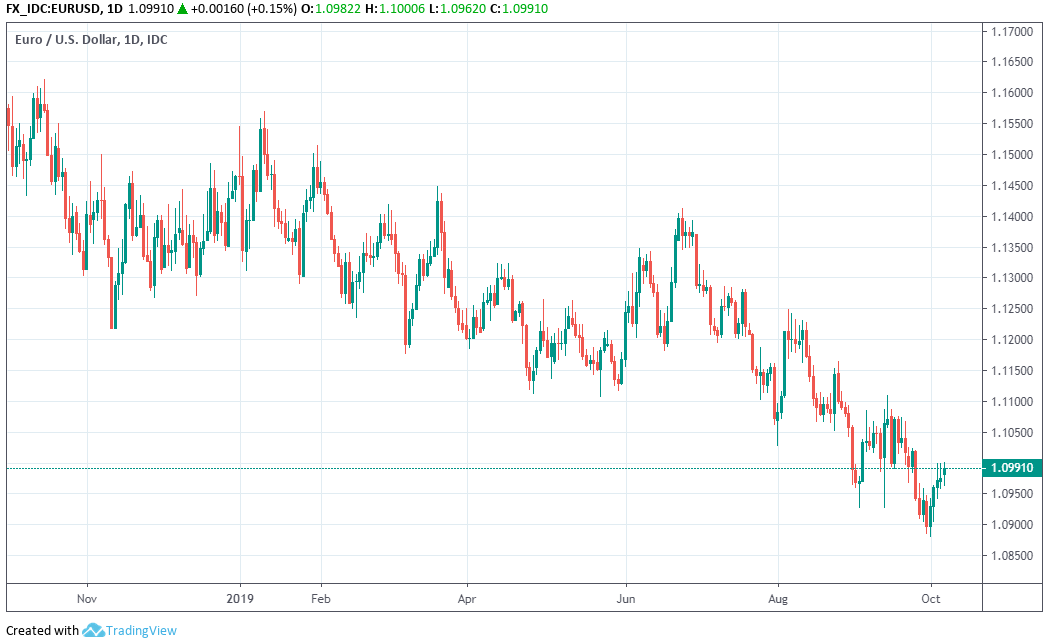 Europe's economy has arguably been the greatest victim of the trade war between the U.S. and China. Quarterly GDP growth rates have so-far fallen by more than half in the last year and the European Commission forecasts the entire Eurozone economy will grow by just 1.2% for 2019. That latter number would be down from 2.4% in 2017 and 1.8% in 2018, but the Eurozone numbers obscure an even bleaker outlook for Germany.

The European Commission forecasts German growth of just 0.5% for 2019, down from 1.4% in 2018, which is dire even in comparison to the Brexit-stricken UK economy that is for all its faults still tipped to grow by 1.3% this year. And those forecasts could well be downgraded as the Autumn progresses.

"The drop in EUR/USD has caught up with our previous 1.09 target. Insofar as we do not expect factors that have been driving USD strength to abate any time soon and, since there is plenty of reason to suspect that EUR weakness may also persist, we have revised lower our 3 month forecast for EUR/USD to 1.07 from 1.09," says Jane Foley, another strategist at Rabobank. "We are less certain about the ability of the EUR to recover its legs before next spring. We have pushed out the expected bottom in EUR/USD to Q2 next year and we lowered our 12 month forecast for EUR/USD to 1.12 from 1.15."