The Euro ceded ground to a resurgent Dollar Thursday but could have a way further to fall over the coming months, according to the latest strategy note from analysts at Deutsche Bank, who advocate betting against the single currency through the summer months.

Europe's single currency enjoyed a morning of relative stability Thursday but it succumbed to selling pressure during the noon session after the Philadelphia Federal Reserve manufacturing PMI and a key housing market survey both surprised on the upside, helping the greenback turn the tables on its rivals.

The Dollar has reversed earlier losses in the noon session and even though most analysts are still forecasting it lower sooner or later, there's increased uncertainty over exactly when the turn will come. Right now, geopolitical risks and concerns about the global economy are expected to keep it supported.

"Cyclical convergence between Europe and the US was our baseline expectation at the start of the year but we are now abandoning the view - at least through the fall," says George Saravelos of Deutsche Bank. "With the cyclical picture dim on multiple fronts - trade wars, Brexit and Italian risks - we see EUR/USD trying to break 1.10 over the summer though not far beyond." 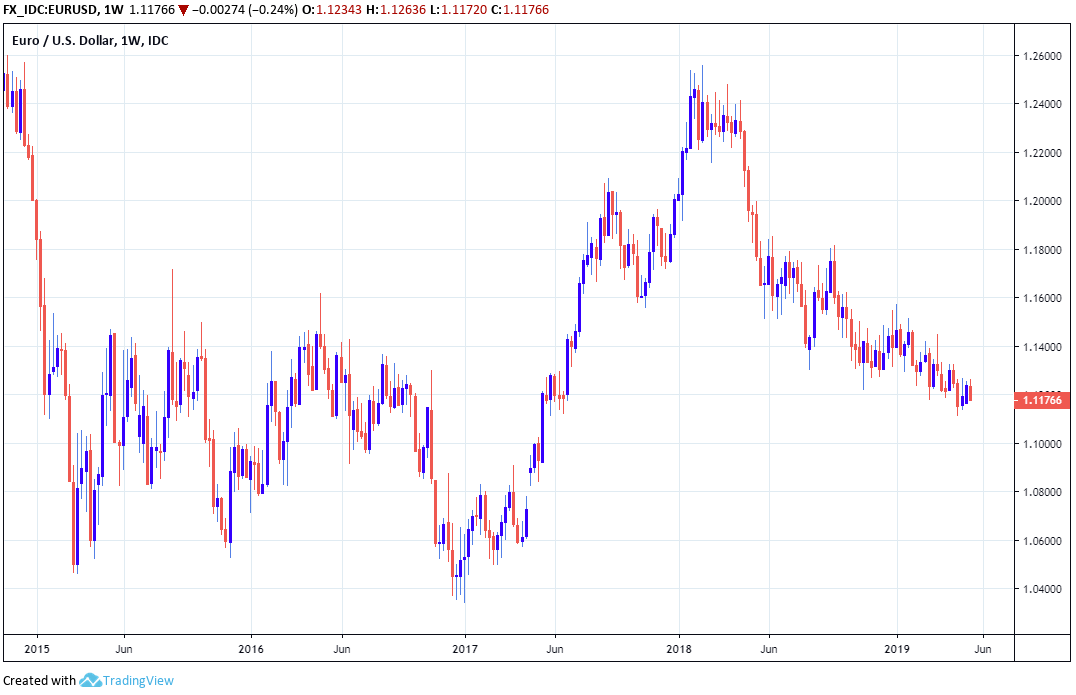 Sarevelos has recommended Deutsche Bank clients buy Euro-to-Dollar 'put options', which will afford speculators the opportunity but not the obligation to sell the exchange rate at a level close to Thursday's price in four months time.

The 'options' are expected to gain in value over the summer months as Deutsche Bank's forecast of a fall toward the 1.10 level is borne out, assuming that its proven correct, at which point investors could either sell on the options contracts or wait until their expiry date.

"With growth expectations subdued, the upside to the euro looks limited. To start with a return of equity inflows back into the Euro-area look unlikely to materialize, and it was these flows that drove the euro rally back in 2017. More crucially, the absolute level of European yields is set to remain very low," Saravelos writes, in a note to clients.

The Eurozone economic outlook has been dented of late by President Donald Trump's latest offensive in the trade conflict with China, which has seen the White House lift from 10% to 25% the tariff levied on around $200 bn of annual imports from China.

It's also set the ball rolling on a process that could see a 25% tariff imposed on China's remaining $300 bn of exports to the U.S. China has since retaliated by lifting to 25% the tariff levied from around $60 bn of annual imports from the U.S., and now rhetoric from both governments is turning increasingly hostile.

The 10% tariff imposed on China's exports to the U.S. took effect in the third quarter of 2018 and so too did a 25% tariff on exports of some $50bn. Some in the market fear that it's no coincidence Eurozone economic growth fell by more than half that quarter, from 0.4% to 0.1%.

"The reemergence of trade tensions creates renewed downside risks to Chinese and global growth to which Germany is particularly exposed," Saravelos says.

Germany's economy contracted in the third quarter of 2018 and although it, as well as the Eurozone economy, have since recouped some of their lost momentum fears are that the fresh conflict between the world's two largest economies will send the former pair back into the gutter again.

This would further scupper European Central Bank plans to raise its interest rate, which is still at its crisis-era low and is weighing on the single currency, particularly as far as the Euro-to-Dollar rate. The ECB refinancing rate is 0% but the Federal Reserve rate is 2.5%.

Relative-interest rates, or the gap between bilateral interest rates, influence international capital flows. Those flows tend to move in the direction of the most advantageous or improving relative-returns, and are a lure for short-term speculators.

"With the European cyclical outlook so subdued we are revising our year-end EUR/USD forecast to 1.13, but see the risks as skewed towards a break of 1.10 over the summer," Saravelos says.

Saravelos and the Deutsche Bank team say investors might need to wait for the Federal Reserve to cut its interest rate before the U.S. Dollar moves lower and the Euro-to-Dollar rate is able to recover some lost ground.

Financial markets are betting this will happen before year-end, and it's only the elevated level of geopolitical risk that's propping up the greenback, but Saravelos has made no comment about when he thinks an eventual move will come. He says only that the Dollar will suffer when it does.

The Euro is tipped to enter a 'bear trend' against the Dollar in the second half of the year by foreign exchange strategists at French investment bank BNP Paribas, although those holding euros will take heart from Eurozone consumer confidence that is approach record highs.

The Euro-Dollar exchange rate is entering a thicket of noteworthy technical support levels, which could enable the single currency to stabilise at or above the 1.1825 level over the coming days after enduring its bloodiest week since March 2020.

Levels below 1.30 in the Euro-to-Dollar exchange rate (EUR/USD) are said to be justified by foreign exchange analysts at Germany's Commerzbank, although they add moves below 1.18 would not be.