"It feels like investors use the liquidity provided around ECB event risk to offload euros," - ING

© European Central Bank, reproduced under CC licensing
The Pound to Euro exchange rate has defied gravity near to one month highs in recent trade but will struggle to recover further this week unless Thursday's European Central Bank (ECB) interest rate decision disuades the market of its recently improved appetite for the single currency.

Sterling remained buoyant above 1.15 against the Euro during early trade on Thursday but a month-long recovery has effectively stalled this week and there is a risk of forthcoming interest rate decisions from the ECB and Bank of England (BoE) prompting a corrective setback for GBP/EUR.

The ECB is widely expected to lift its once-negative deposit rate by three quarters of a percentage point to 1.25% on Thursday and some say this could benefit the Euro to the detriment of Sterling, the Dollar and other currencies.

"We expect the ECB to deliver another 75bps hike today, and to leave the door open to further large hike at the final meeting of the year in December. ECB policymakers have signalled clearly recently that they want to raise rates closer to 2.00% by the end of this year," says Lee Hardman, an analyst at MUFG. 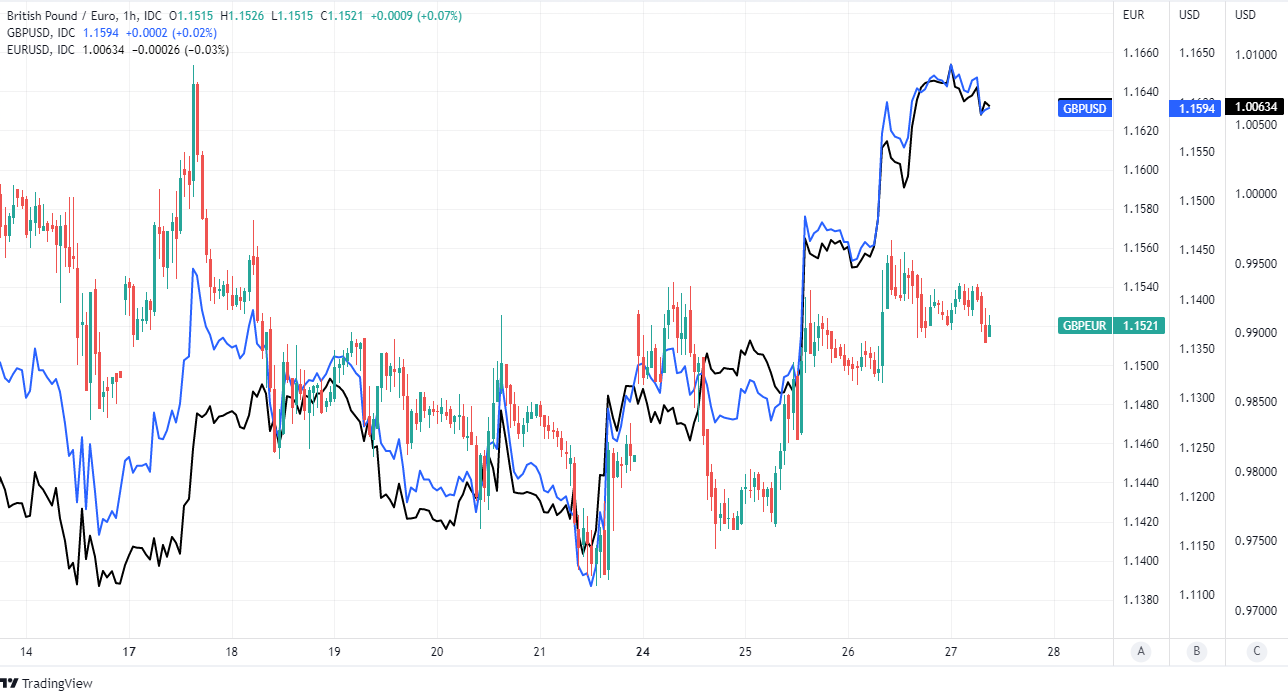 Above: Pound to Euro rate shown at hourly intervals alongside GBP/USD and EUR/USD.

Hardman and the MUFG team are sellers of Sterling and have recently tipped the Pound to Euro for a fall back toward 1.11 in the weeks ahead.

They cited a deteriorating outlook for the UK economy and risks relating to Bank of England (BoE) interest rate policy, although ECB policy is relevant too and the bank's guidance on interest rates, its balance sheet and Eurozone economic prospects will be more important for Sterling ahead of the weekend.

”Markets price the deposit rate being taken to 2.75% in a year's time. Our team thinks the top in the cycle will be more like 2.25%, but with Eurozone CPI running at 10% it is too early to expect the ECB to push back," says Chris Turner, head of markets and regional head of research for UK & CEE at ING.

"The ECB has surprised hawkishly all year - but EUR/USD has generally ended ECB policy days weaker. It feels like investors use the liquidity provided around ECB event risk to offload euros," Turner said on Thursday.

ECB policymakers have stressed in recent appearances that with double-digit inflation rates increasingly common in the Eurozone, interest rates will have to rise further in the months ahead, although these remarks and the ECB's other recent increases in interest rates have not benefited the Euro in an obvious way. 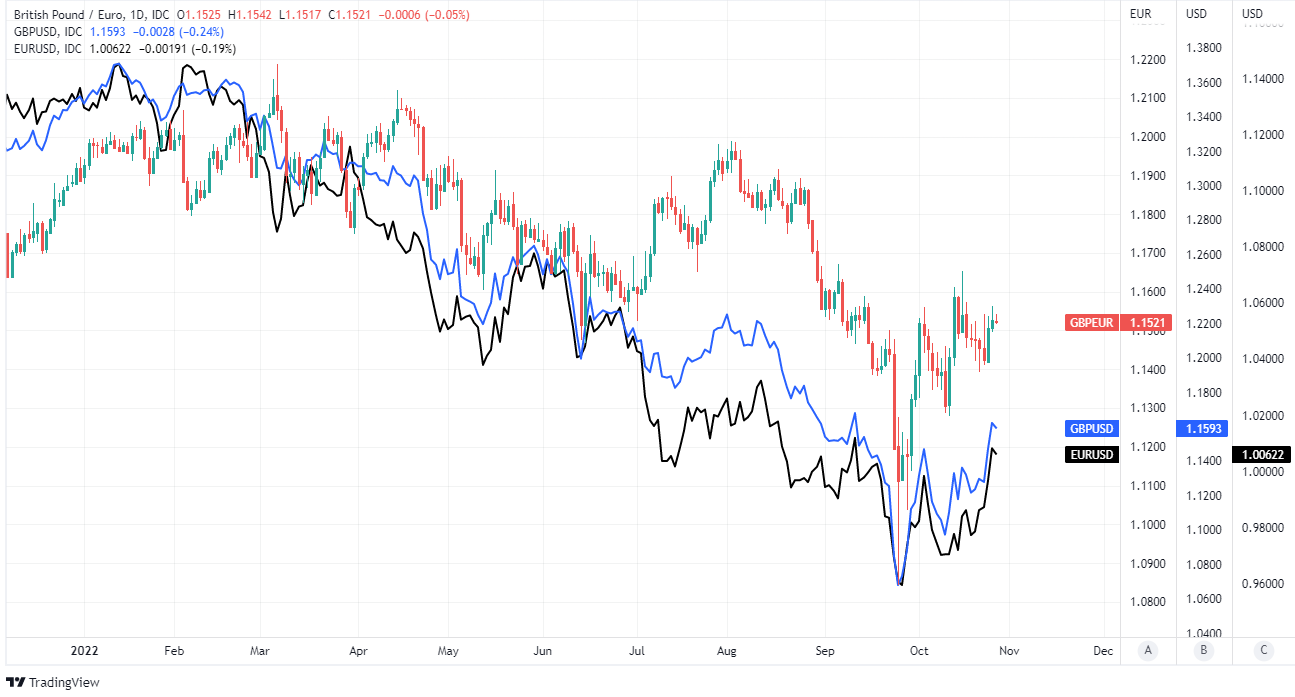 Above: Pound to Euro rate shown at daily intervals alongside GBP/USD and EUR/USD.

Some analysts say this reflects market concerns about what rising interest rates will mean for financial stability in the more indebted European countries and to the extent that it does there may be scope for the Pound to Euro pair to benefit from Thursday's ECB decision.

But even if Sterling does manage to navigate this without serious setback, it would then face risks associated with next Thursday's BoE decision.

"The Bank of England is caught in a difficult position, hiking rates to control inflation against a sharply slowing economy," says Vincent Heaney, a strategist at UBS Global Wealth Management.

"On top of this, a likely fiscal squeeze will make the post-winter period a subdued one for the economy. We remain least preferred on the pound," Heaney said on Thursday.

The BoE is widely expected to lift Bank Rate from 2.25% to 3% or more next week but with the economy slowing sharply already in the third quarter and the government seen as likely to cut public spending notably in the months ahead, it's far from assured that Sterling would benefit from next Thursday's decision.

The Pound also faces risks associated with any pushback by the BoE against market assumptions about the outlook for Bank Rate.

Many analysts and economists have tipped the BoE to lift Bank Rate above 4% by the early months of the new year but most also expect the UK economy to be mired in the depths of a recession by then.