Pound Sterling was again one of the bigger fallers in a bloody period for risk assets last week having eked out paltry gains over only the highest beta and most risk sensitive currencies like the commodity Dollars of Australia and New Zealand and the Norwegian Krone.

Sterling fell further against the European single currency than it did against even the safe-haven Japanese Yen and Swiss Franc in price action that had left the Pound to Euro exchange rate straddling the 1.1700 handle by the opening of the new week.

“The effective rate of spread in South Africa looks much higher for Omicron than for Delta, which suggests greater inherent transmissibility and/or significant immunity erosion,” says Jan Hatzius, chief economist and head of research at Goldman Sachs.

“Much uncertainty still remains, and we are focused on how quickly Omicron spreads globally, especially in countries with high sequencing such as the UK,” Hatzius and colleagues wrote in a Friday briefing for clients. 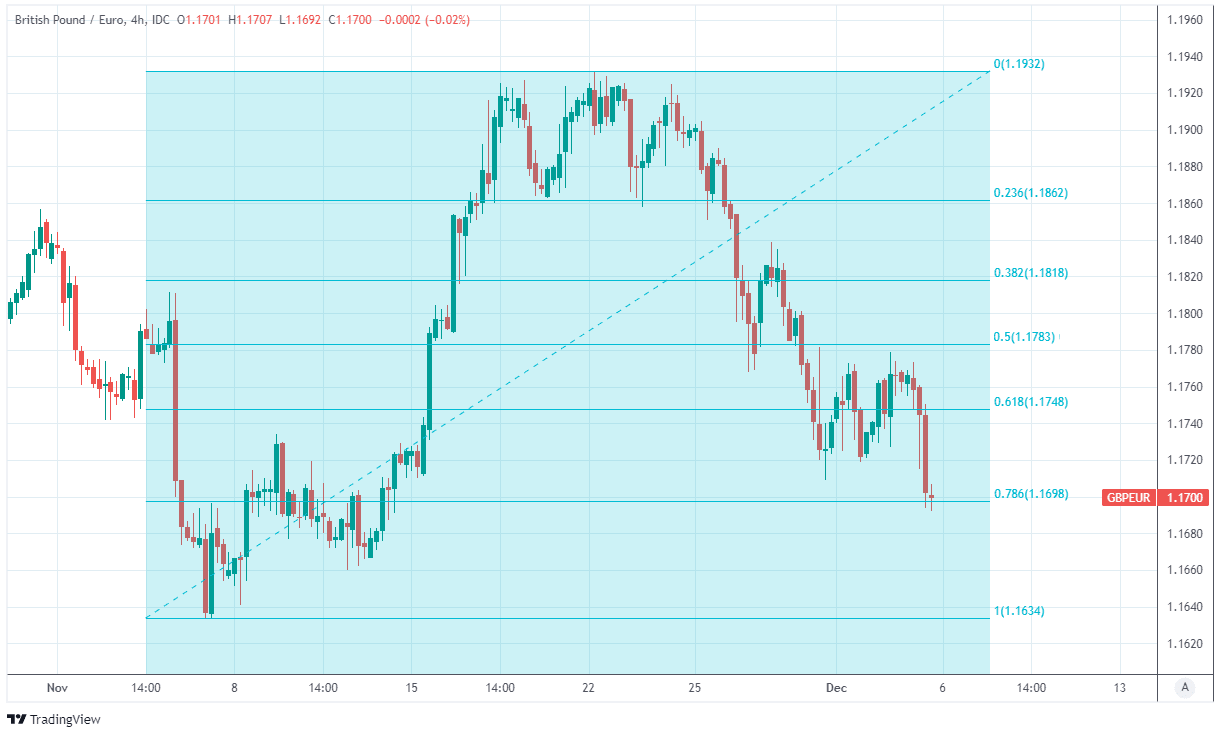 There is little left to break falls in the Pound once beneath Monday’s opening level until the 200-day moving-average at 1.1677, which is the last technical impediment to early November’s lows in the region of 1.1634.

Each of these latter levels could potentially be seen if the market continues to eschew risk currencies like Sterling throughout the new week, although some technical analysts are looking for the Pound to Euro exchange rate to find its feet above the 200-day average at 1.1677.

“Whilst we would still not rule out a test of the key falling 200 -day average at .8561 our bias remains for a cap here and for the broader risk to then turn lower again,” writes David Sneddon, head of technical analysis at Credit Suisse, in reference to EUR/GBP.

The week ahead could prove to be a pivotal one for the Pound-to-Euro exchange rate if for any reason Sterling was to find itself submerged beneath the November low of 1.1633 referenced by Credit Suisse’s Sneddon as this is effectively a pivot point in the medium-term trend.

This leaves much to be determined by the market response to incoming details about the threat posed by the newest mutation of the coronavirus and to October’s UK GDP data due out on Friday morning, which will provide insight into the status of the UK’s economic recovery early in the final quarter.

Consensus estimates suggest Friday’s GDP data will reveal 0.3% pace of growth for October, reflecting a continued expansion led by the UK’s services sector, although the outlook for this part of the economy is now more clouded given that it’s the most exposed to risks posed by the new virus strain.

“The latest data and survey results offered more evidence that UK activity picked up pace in the early part of Q4. But uncertainty surrounding the Omicron Covid variant has continued to weigh on the markets,” says Andrew Goodwin, chief UK economist at Oxford Economics. 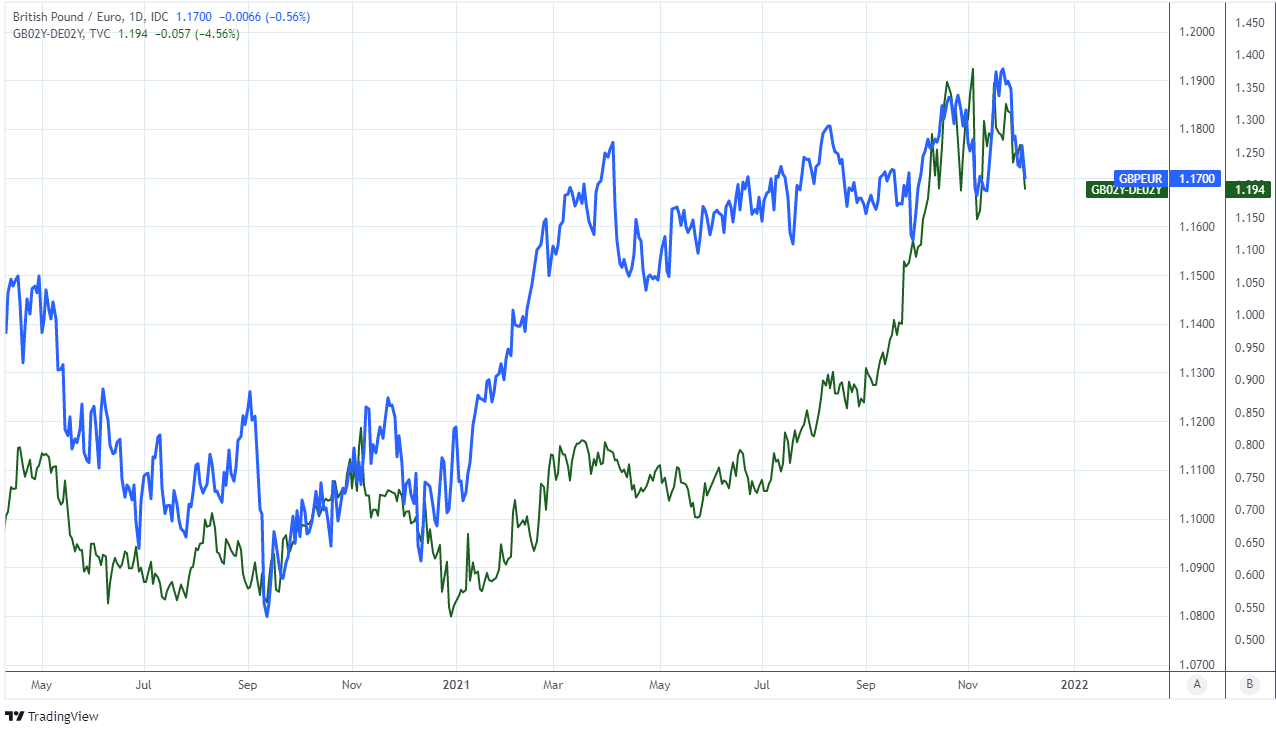 Above: GBP/EUR shown at daily intervals with spread, or gap between yields on 02-year UK and German government bonds.

“The prospect of a period of greater consumer caution means we have cut our near-term growth forecast. And recent soundings from the MPC haven’t altered our view that the committee will spurn a rate hike in this month’s meeting,” Goodwin wrote in a Friday research briefing.

Before Friday’s GDP data is published the market will also likely pay close attention to Bank of England Deputy Governor Ben Broadbent who’s set to spark publicly about the outlook for growth, inflation, and monetary policy at the Leeds University at 11:30 am on Monday.

As deputy governor for monetary policy and a member of the BoE’s nine seat rate setting committee Ben Broadbent’s views would always carry weight with the market.

Although, it's possible Monday’s speech will garner even more attention than usual in light of the potential implications for the UK and global economic recoveries stemming from the newly detected strain of the coronavirus.

"In considering if and when to adjust rates, there is always a case to wait and see more data. At present, given the new Omicron Covid variant has only been detected quite recently, there could be particular advantages in waiting to see more evidence on its possible effects on public health outcomes and hence on the economy," said the BoE’s Michael Saunders, in an online webinar on Friday.

The new variant quick to prompt financial markets to revise their expectations for Bank Rate in favour of an initial increase from 0.1% to 0.25% that comes in February 2022 rather than in December, and has since seen Saunders - who already voted to lift Bank Rate in November - publicly entertaining the notion of whether it might be prudent to wait until the new year.