- GBP/EUR consolidates ahead of ECB meeting
- Technical analysis suggests bullish breakout favoured
- Could potentially reach 1.20
- ECB’s Lagarde expected to dismiss concerns about inflation
- Could be negative for the Euro

The Pound to Euro exchange rate is trading at around 1.1844 at the time of writing after losing 0.21% through the mid-week session.

The next major event on the horizon is the European Central Bank (ECB) meeting on Thursday, an event which almost certainly will have an impact on the pair.

From a technical perspective GBP/EUR is trading within a range-bound consolidation between 1.1460 and 1.1870.

At some point the pair will break out of this consolidation and to the practiced eye the charts seem to suggest an upside breakout may be marginally more probable than the opposite - a downside break. 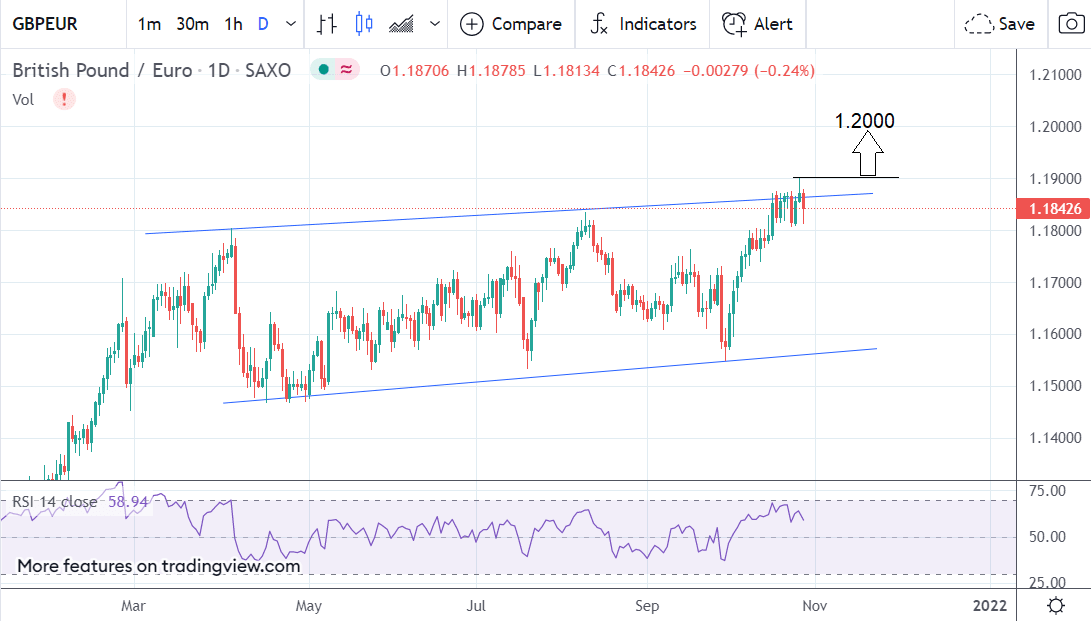 Such an outlook falls in line with most analyst’s expectations of the outcome of the ECB meeting which are seen as presenting downside risks to the pair.

Whilst inflation is on the rise everywhere, ECB President Christine Lagarde is likely to emphasise the transitory nature of the phenomenon in the Eurozone and thus keep the Bank’s forward guidance relatively dovish - at least when compared to most other central banks.

Policymakers have so far played down inflationary concerns. For example, earlier in October, the ECB President stated that the governing council would, “not overreact to supply shortages or rising energy prices, as our monetary policy cannot directly offset these phenomena.”

Eurozone inflation also appears to be substantially uncoupled from growth. When compared to the US, where price rises have been accompanied by economic growth, the Eurozone presents a much more negative economic picture. Despite inflation rising to above the ECB’s 2.0% target, economic indicators have remained sluggish.

In the case of GBP/EUR a more apt comparison would be with the UK economy and the Bank of England (BOE). In the case of monetary policy, the BOE looks much more likely to adopt a hawkish stance than the ECB, suggesting outperformance of the Pound. Most recently, the BOE’s Andrew Bailey and chief economist, Huw Pill, saw the Bank raising rates as soon as before Christmas. 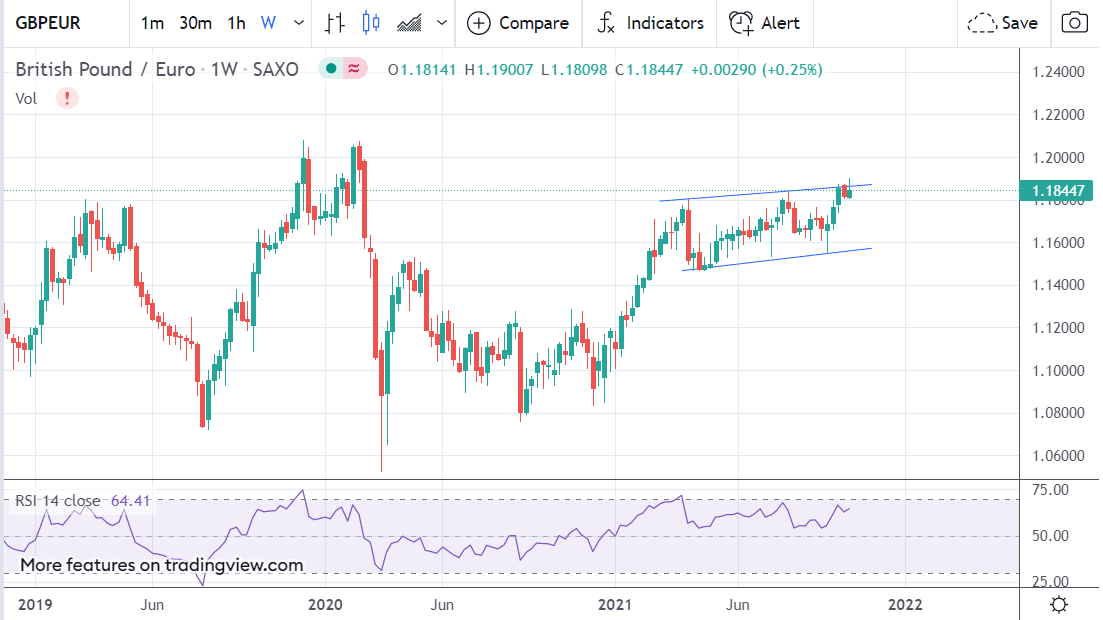 Above: GBP/EUR weekly chart showing the uptrend channel of 2021.

Euro weakness versus the Pound would dovetail nicely with the technical chart pattern setting-up on the chart.

A break above the 1.1901 highs, and the top of the consolidation pattern, would open the way to a move up that would represent at least a Fibonacci 61.8% extension of the height of the consolidation zone. This would probably result in the achievement of a target at roughly 1.2000, possibly even 1.2035.

In the less likely event that the Euro strengthens it would lead to a decline back down within the consolidation zone to about the 1.1520 level, with confirmation coming from a move below 1.1750, potentially triggering the descent.

The British Pound softened over the past 24 hours in sympathy with a fall in the yield paid on long-duration UK government bonds, which could be linked to expectations for lower government borrowing requirements in coming years.

The cost of financing government bonds fell into, and in the wake of, the autumn budget statement delivered by Chancellor Rishi Sunak where it was revealed UK borrowing requirements over coming years would be lower than anticipated.

This is the biggest one-day fall since March 2020 and is linked to a combination of falling inflation expectations and a belief the UK government will not be required to issue as much debt as previously expected. 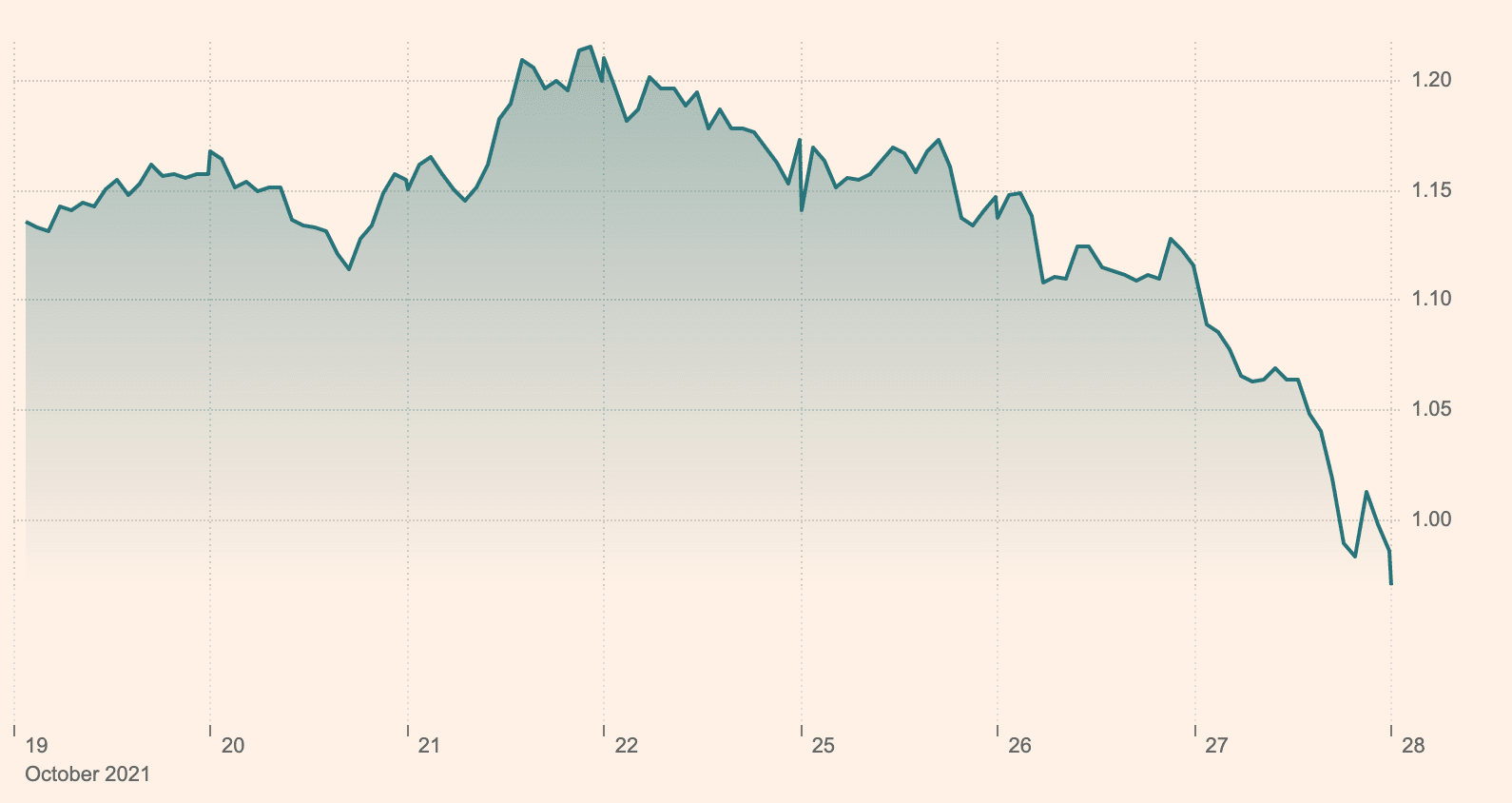 Above:  The yield paid on ten-year government bonds, image:  FT.com

The UK Debt Management Office has meanwhile anticipated a £57.8BN fall in planned bond issuance in 2021/22, with the potential for a substantive reduction in issuance through the forecast period.

A lower supply of bonds issued to fund borrowing implies higher bond prices, all being equal, as investors chase a limited supply.

Given yields move in the opposite direction to bond prices the net result is lower bond yields.

Therefore, the fall in UK ten-year yields deprives the Pound of a bid.

Readers are reminded we are approaching month-end while next week sees a pivotal Bank of England policy announcement; there could be a lot of noise to navigate in the market today and over coming days.