"Continued dovishness from the ECB will pave the way for increased policy divergence in the near-term and weigh on the Euro."

With an ever-evolving economic environment, major central banks take on the rigorous task of reviewing their strategy and adjusting the policy framework periodically.

For the Fed and the Bank of Canada (BoC) for example, this review typically takes place every 5 years.

The outcome of it? Not as impactful as one would expect.

In an effort to provide further clarity, the ECB revised its inflation target to be more in line with global benchmarking at a flat 2% level.

Unlike the Fed’s 2% averaging target, which allows for inflation overshoots, the ECB does not seem accommodating of deviations outside its objective, at least not longer-term.

With the strategy review now complete and a new target inflation level established, it will be interesting to see how the ECB adjusts its forward guidance at the upcoming policy meeting.

Following the shift in rhetoric from the Fed last month, major central banks around the world have been active in discussions or acting on taper strategies as seen by the BoC, Reserve Bank of New Zealand, Reserve Bank of Australia and Norges Bank. 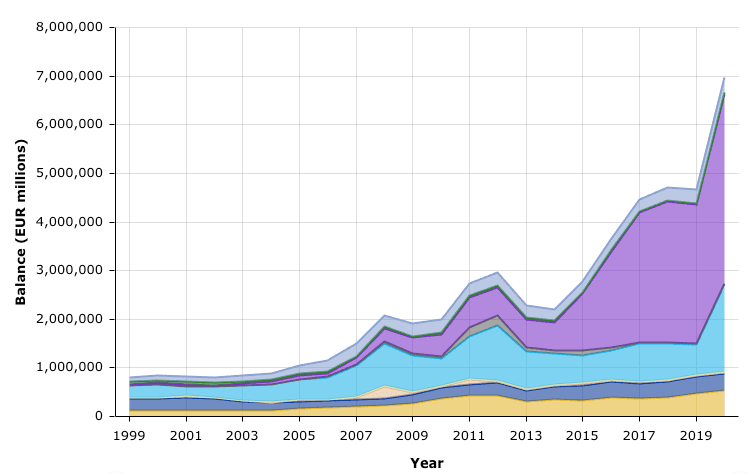 Above: ECB balance sheet and assets.

The ECB however was quick to dismiss any accordance to this path and went to great lengths to highlight the differences between the regions.

With that said and the ECB now revising its inflation target, there is further latitude for the central bank to ramp up its pandemic related asset purchases to stimulate activity in a region that has struggled with low inflation levels over the years.

This could potentially result in continued accommodative policy measures beyond the set expiry of the Pandemic Emergency Purchase Program (PEPP) in the spring of 2022. In that event, policy divergence with the other central banks will continue to drift apart and lead to further declines in the Euro.

There has been a decent sell off in EUR in recent weeks, and we’ve seen net long positioning pare back . The market looks towards the upcoming ECB meeting on July 22 and will assess the impact of its new policy strategy and how it weighs on forward guidance.

In order to support the new inflation mandate, I would expect a dovish tone from the ECB along with a commitment to holding / extending its policy. It is fair to say that further monetary stimulus may also be required to support the higher inflation target, and the market will look for an indication from the ECB on the size of its asset purchases going forward.

Despite the most recent Euro Zone inflation print hovering just one tick below 2%, policy makers are brushing aside the price pickup as temporary and continue to focus on high unemployment levels signalling a somewhat weak medium-term outlook.

It seems to me that the ECB is treading lightly here to avoid tipping off the market and ward off any tightening discussions until the data proves otherwise.

Erring on the side of caution is likely a lesson learnt from its past actions – think back to 2011, when the ECB impulsively hiked rates on what was only a temporary spike in inflation.

EUR positioning has reversed since the June FOMC meeting and short positions are starting to build. In the short-term, expect this momentum to persist as the ECB continues to lag behind other G10 central banks in terms of policy and its rate hike outlook. With EUR/USD extending its downtrend, it seems well set to test its YTD lows at 1.1717.

This range is consistent with our ‘Market Melt-Up’ scenario, which prices in aggressive Fed action and growing policy divergence.

Longer-term however, we have highlighted the risk that despite the shift in the Fed’s rhetoric, the likelihood of the Fed ‘walking the talk’ is growing increasingly unlikely. Inaction from the Fed, along with inflation running hot, would result in a reversal of the recent month’s price action and a rally in the EUR/USD pair.

Our 2021 FX outlook highlights just this under the ‘Market Melt-Up’ scenario which looks at currency implications pre and post action from the Fed as a result of spiralling inflation.

Keep a close watch on how the central bank looks to incorporate its revised inflation target into its policy measures.

Expect there to be talks on additional stimulus requirements and perhaps an extension to the PEPP to support the new target.

Continued dovishness from the ECB will pave the way for increased policy divergence in the near-term and weigh on the Euro.