The Pound-to-Euro exchange rate reached fresh one year highs above 1.18 to open the new week and was close to the middle of a 1.17-to-1.20 trading range that could be set to define price action for Sterling during the weeks ahead.

Pound Sterling has traded as high as 1.1802 in morning trading Monday, its highest since February 2020, as the diverging fortunes of UK and European economies were thrown into stark relief by a renewed lockdown in Brussels that began on Saturday, just as the UK prepares to begin reopening.

That divergence is most poignant as it relates to the two economies and implications for monetary policies on either side of the Channel, where on one side the Bank of England (BoE) has taken a rise in British government bond yields in its stride while on the other, the European Central Bank (ECB) recently accelerated the pace of quantitative easing bond purchases to avoid a slower addition of support to Europe’s economy.

“It’s a theme that keeps delivering. The UK remains on course to ease restrictions further in line with the government’s “Roadmap” at a time when lockdowns in Europe look set to widen and tighten before the worst is over. Sterling seasonals also turn positive in April. We therefore do not believe the year lows for EUR/GBP and the highs for GBP/USD have been seen,” says Paul Robson, head of G10 FX strategy for EMEA at Natwest Markets. “We stay short the former and stay long GBP/CHF.”

Nascent divergence between policy stances of the BoE and ECB is a powerful argument to support the Pound-to-Euro rate above current levels. 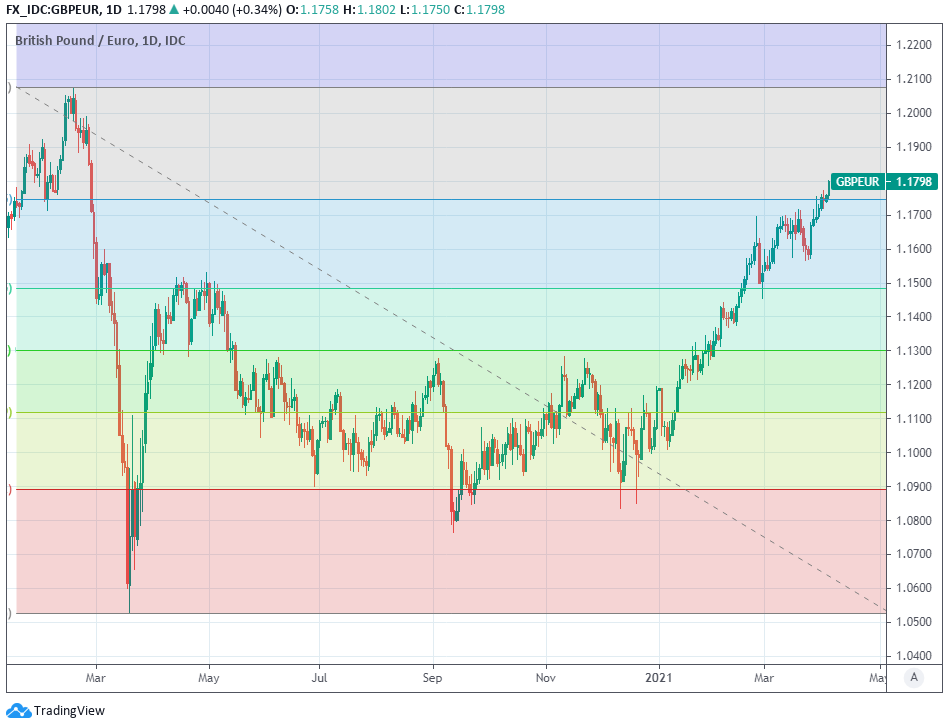 Above: Pound-to-Euro rate at daily intervals with Fibonacci retracements of 2020 fall.

Sterling had already climbed above 1.17 last week but was on course to overcome an important technical resistance level as well as in the process of establishing itself in what may be likely to become a 1.17-to-1.20 trading range following Monday’s capture of 1.18.

The upper bound of that range is still in the lower half of the Pound’s post-referendum trading band but far enough off of its floor to reflect a meaningful one percent depreciation of the trade-weighted Euro from mid-January levels, which may explain some of the Euro-Dollar rate’s 2021 resilience.

The trade-weighted Euro fell more than two percent between New Year and Monday while around half of the decline came through GBP/EUR gains.

“EURGBP is again seeing a concerted effort to move below key support at .8520 – the 38.2% retracement of the entire 2015/2020 bull trend. With the EUR holding a large top as looked for we continue to look for an eventual sustained break below here for a fall to the “measured objective” from the 2020 top at .8430,” says David Sneddon, head of technical analysis at Credit Suisse, who’s looking for Sterling to close above nearby resistance at 1.1737.

Sneddon says a daily close by the Pound-to-Euro rate above the Fibonacci retracement at 1.1737 would carve out a pathway on the charts for Sterling to rise to 1.1876 before testing its current post-referendum high around 1.2075 later on. This is likely a multi-week process, however.

In the meantime however, the economic calendar is devoid of major data this week for both currencies, leaving them at the beck and call of the wider market.

“After Norway's krone, sterling seems to be the best placed currency in the European G10 FX space,” says Petr Krpata, chief EMEA strategist for FX and interest rates at ING. 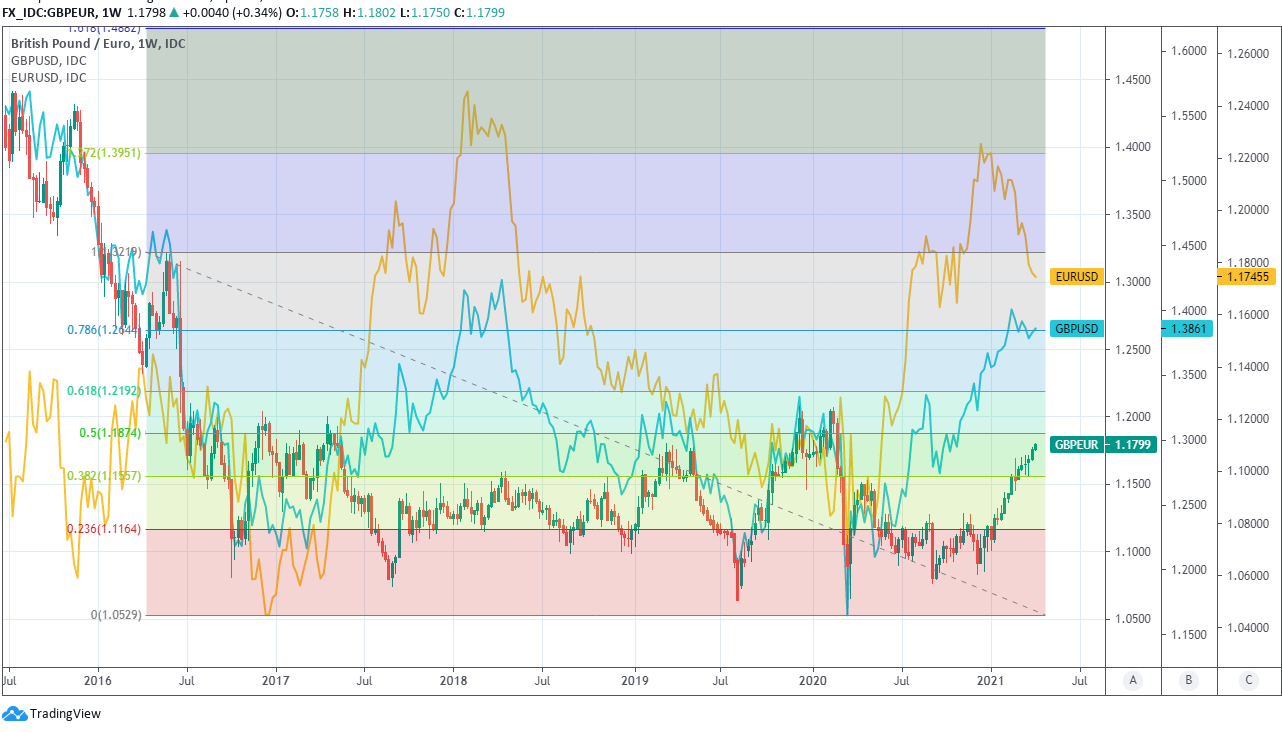 “Scrutiny could be given to the minutes of the March European Central Bank meeting released on Thursday. Here, the focus will be on how broad support was for the front-loading of the Pandemic Emergency Purchase Programme,” Krpata says. "We’ll also see whether the EU’s Recovery Fund can overcome the hold-up in the German constitutional court – which would at least be some welcome news. If not, expect serial EUR underperformance to continue."

The Pound was the top performing major currency to open the week on Monday and has a strong track record against the Euro during any given April month, studies of seasonality in the currency market show.

Seasonal trends may help support Sterling this week and through the coming month, although it’s the UK’s pole position in the vaccine race that has done most of the heavy lifting for the Pound-to-Euro rate.

"A vaccination inflection point for Europe, and the EUR, may not be as far away as current case trends make it seem," says Natwest's Robson.

Britain had part-vaccinated all of its most vulnerable already by Monday and was on course to have offered all adults over 50 the first dose of a vaccination by mid-April, with all adults set to follow by July.

This, continental procurement troubles and a sluggish rollout across Europe has been a boon for Sterling already and is expected to remain supportive in coming weeks but eventually a European catch-up will reign in the Pound-Euro rate.