- GBP/EUR shows signs of stabilising after shaking off Brexit jitters.
- But to be tested by BoE rate chatter, mini budgetand Brexit talks.
- Charts point to correction higher as GBP finds suppor near 1.0937.

The Pound recovered sharply off three-month lows against the Euro last week and the charts are now warning of a further correction higher, although there are a number of potential pitfalls on the road ahead for Sterling.

Sterling had tested the 1.09 handle against the Euro after being sold early last week but was testing 1.11 by the Friday close after climbing steadily alongside stock markets, and in spite of repeated reminders of the lingering prospect of something like a 'no deal' Brexit at year-end.

But appetite for the British currency will be tested on multiple occasions in the week ahead beginning at the open on Sunday and over the course of Monday morning where investors will have an opportunity to respond to a Sunday Times report revealing the Bank of England (BoE) has been in contact with commercial lenders to warn them about the costs of a possible shift to a negative interest rate policy further down the line.

The BoE has broached the subject repeatedly of late, prompting weakness in Sterling in most instances so the Pound-to-Euro rate might be likely to find itself on the back foot initially at least. But if the recent low at 1.09 is left intact after what this week has to offer, which also includes a mini budget from Chancellor Rishi Sunak and another update on the Brexit trade talks, then it would be a further indication of a short-term bottom forming for Sterling.

"To a larage extent, the short-term outcome for the GBP will now depend on whether a political declaration between the two sides can be crafted by the final week of July. The relatively short time span between now and then could reduce investors' appetite to maintain sizable exposures in both GBPUSD and EURGBP. This may leave the former a lot more dependent on risk appetite variables, like global equities. A further bid in global equities may not be enough to force a close below 0.90 in EURGBP yet. But it could be enough to force a re-test of 1.2600 in GBPUSD, which roughly coincides with the 61.8% daily retracement of the move down from 1.2813," says Stephen Gallo, European head of FX strategy at BMO Capital Markets. 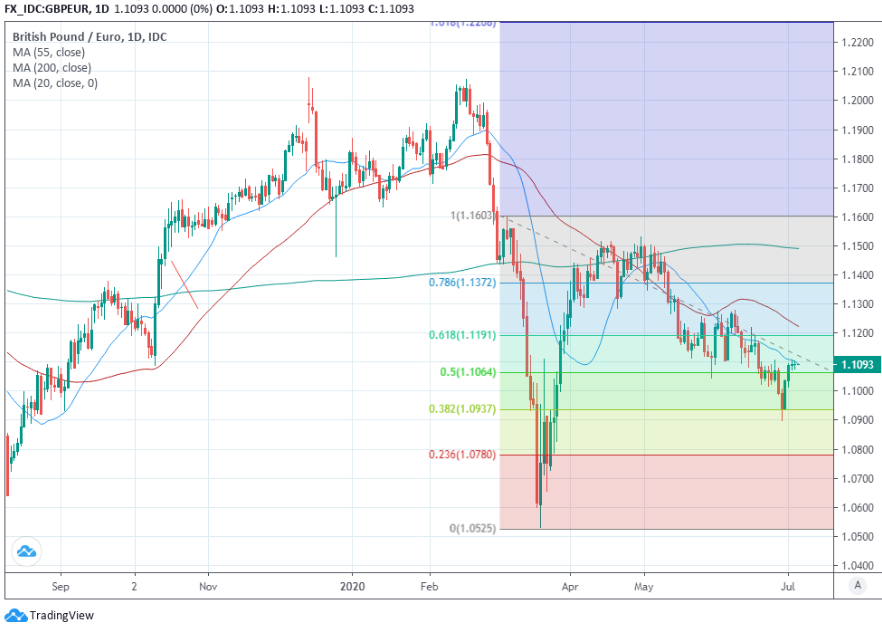 Above: Pound-to-Euro rate at daily intervals with Fibonacci retracements of March fall and selected moving-averages.

Prime Minister Boris Johnson indicated three times last week that he's open to an Australian style trade relationship with the EU, otherwise known as one governed by World Trade Organization terms, though it it took an early end of the first "accelerated" round of Brexit trade talks on Thursday to wobble the currency after Monday's losses and even then, weakness was only momentary.

Chancellor Angela Merkel also said Wednesday that Europe needs to prepare for the possibility that an agreement will not be reached, but Sterling barely blinked and still closed the session higher, which might indicate that a lot of the bad news around the British currency is already reflected in the price and that the path of least resistance is now shifting toward the upside.

"EUR/GBP is seen coming off its .9178 June high and is seen slipping back towards the six month uptrend line at .8977," says Axel Rudolph, a technical analyst at Commerzbank, tipping Sterling to rise to 1.1139. "Below it solid support can be seen between the 55 day moving average and the June low."

Rudolph says a move above 1.1139 could ultimately see the Pound set its sights on the 1.1281 level but that it would likely struggle at that stage. He and the Commerzbank team are betting on fresh declines for the Pound-to-Euro rate in the coming weeks and are targeting a move down to 1.0752.

The Brexit talks are at a crucial juncture and will be a key focus this week but before then Sterling will take cues from Wednesday's mini budget.

"The longer-term focus to dominate sterling’s trading direction is whether or not a second wave of infections halts the reopening of economies worldwide and whether a UK-EU trade deal can be achieved," says George Vessey at Western Union Business Solutions. "Should GBP/EUR achieve a close above the €1.1120 mark this week, then an acceleration back towards €1.13 next week or the week cannot be ruled out, with the €1.15 mark the next big upside target.”

Chancellor Rishi Sunak is expected to announce a range of fiscal measures on Wednesday in order to jump start the economy after pubs and restaurants were allowed to open on Saturday for the first time since March, joining supposedly non-essential retailers. It's not clear how the Chancellor will seek to aid the economy although his announcement comes after Boris Johnson's plan to bring forward £5bn of infrastructure spending into the current year went down like a damp squib with investors last week. 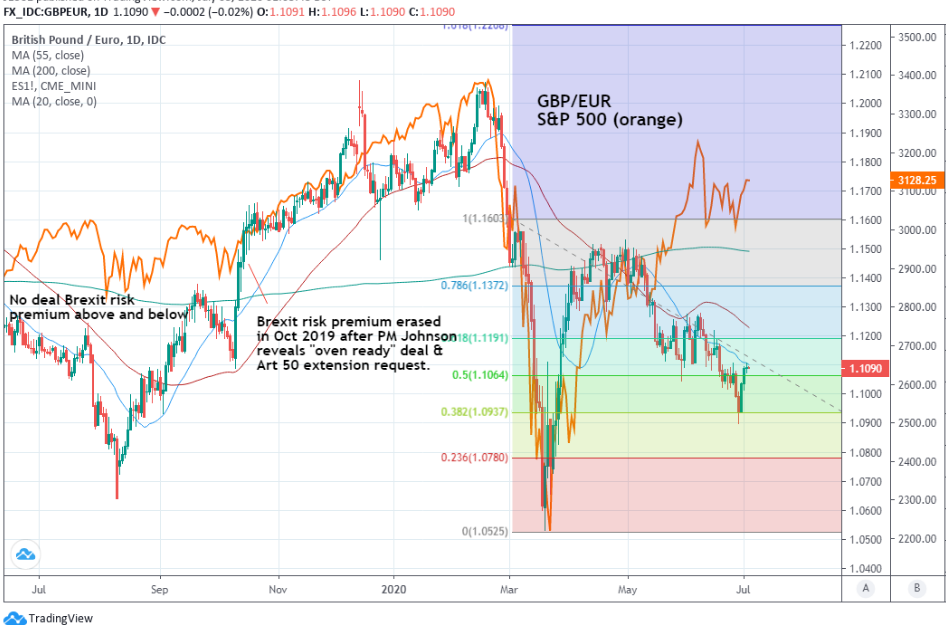 "Tax cuts are probably unlikely but we should see targeted measures to cushion the rise in unemployment (such as wage subsidies for firms taking new staff or preserving jobs). If there is meaningful new spending, this may provide a boost to GBP on the day, but its effect should be a one-off and unlikely to last as the overriding GBP determinant remains the outlook for the UK-EU trade deal," says Petr Krpata, chief EMEA strategist for currencies and bonds at ING.

Coronavirus has dealt a heavier blow to the UK's services heavy economy than it has many others and has imposed extortionate costs on the public purse, the full extent of which will be dictated in no small part by the speed and duration of the recovery that's thought to have begun in May. Meaningful support for struggling firms, jobs and household consumption might be enough to prompt a bid for Sterling although the outlook remains dominated by the Brexit talks, another round of which concludes Friday.

"While the EUR remains somewhat sidelined and forges a range in the near term, the GBP will be one of the few currencies to trade on its own fundamentals, with progress in the Brexit negotiations the key," says Daniel Been, head of FX research at ANZ.

British negotiator David Frost said last week only that "We have completed our discussion...The negotiations have been comprehensive and useful. But they have also underlined the significant differences that still remain between us on a number of important issues. We remain committed to working hard to find an early understanding on the principles underlying an agreement," while familiar complaints were heard from the European side.

Any budget-induced upside in Sterling will either be constrained or augmented in the final session of the week when updates are expected from Brexit negotiators as well as the Eurogroup of finance ministers who'll be discussing the eagerly anticipated EU recovery fund.

Markets will be looking for signs of compromise between the 'frugal' Northern countries and the Franco-German bloc and could be sensitive any developments that suggest the two sides are still far apart. Any resulting up or downside in the EUR/USD rate will either lift or weigh on the Pound-to-Euro rate. At issue in the negotiations is, among other things, the share of the €750bn fund that will be made up of grants as opposed to loans, as well as whether financing from the fund should come with strings attached.

"The focus is now with EU leaders to close the deal on the recovery fund and the EU budget –which we expect to happen this month. We believe this will largely benefit the periphery – more affected by the pandemic – where we expectunemployment to rise more through this year,given higher exposure to tourism and other constrained sectors," says Jacob Neil, an economist at Morgan Stanley.