- GBP/EUR supported at 1.1030 & may celebrate UK reopening Monday.
- But will struggle to better moving-averages at 1.13 & resistance at 1.15.
- Full sleight of fundamental, political risks to weigh as week progresses.
- Brexit talks, U.S.-China tensions, rising EUR/USD all risks to GBP/EUR.

The Pound-to-Euro exchange rate could garner support on Monday or even find itself receiving a bid as the economy partially exits 'lockdown,' but a full sleight of fundamental risks may trouble the British currency as the week progresses.

Pound Sterling ceded ground to the Euro for three days on the bounce last week, leading it to close 0.37% lower for the period and making for a hat-trick of weekly losses, although the pair could find support in Monday's session owing to a tentative and fledgling effort to reopen the economy from months of 'lockdown'.

"With virus trends improving, the UK will begin on 1 June to gradually lift the lockdown, which was originally introduced on 23 March. The UK government plans to reopen society and restart economic activity in stages, while adhering to some continued social-distancing practices to prevent a second wave of the virus that would require a return to full nationwide lockdown. The UK will remain in Phase Two until a medical solution becomes available, such as vaccine or effective treatment. At that point, life can begin to fully return to normal in Phase Three," says Kallum Pickering, Senior Economist at Berenberg.

From a technical perspective, Pound-Euro traded briefly down to the 50% Fibonacci retracement of its March-to-April rebound at 1.1030 on Friday, a level that should cushion the British currency early this week. 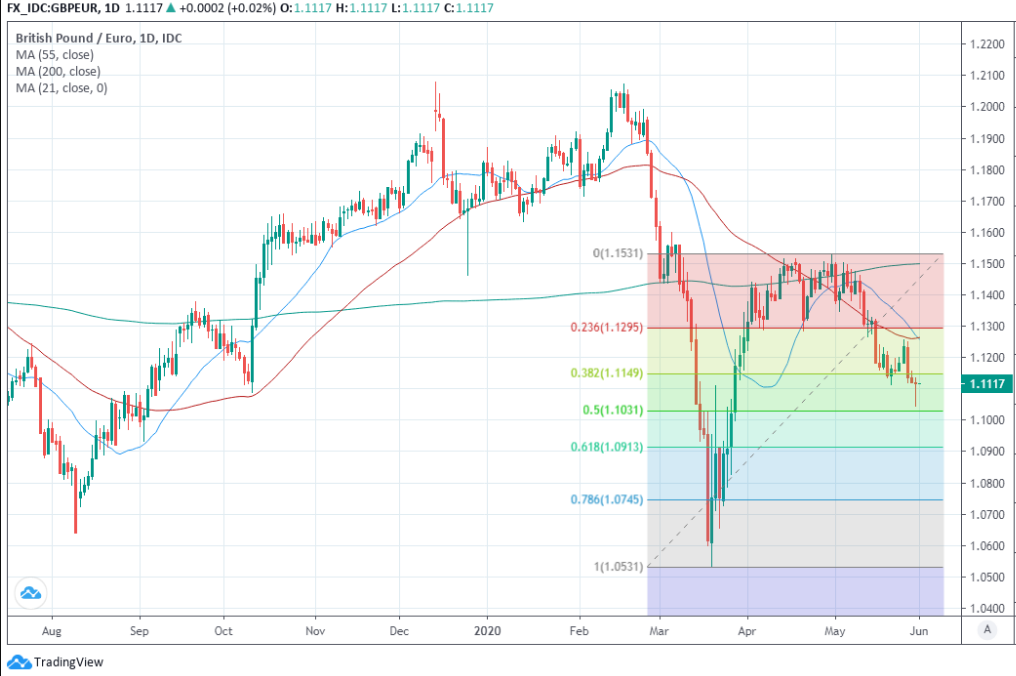 Karen Jones, head of technical analysis for currencies, commodities and bonds at Commerzbank, says the Pound-Euro exchange rate remains constrained by the 55 day moving average at 1.1263 and continues to "probe psychological" support at 1.11, but this level "is now considered to be exposed".

Jones views the market as having recently peaked and targets a move back to 1.1037.

However, should Sterling surprise to the upside the exchange rate would find itself running out of steam around the 1.13 handle in any recovery rally, where it'll come into contact with the 21 and 55-day moving-averages of prices, and even if it did overcome those levels Commerzbank's Jones says it would meet resistance near to 1.15.

Brexit Headlines, ECB Meeting are Key Fundamanetal Risks in the Week Ahead

Beyond an economic reopening the Pound will contend with the fourth and final round of Brexit talks before a stock-taking excercise on the part of Prime Minister Boris Johnson and European counterparts, who'll decide later in the month whether it's worth continuing with the talks or renewing 'no deal' Brexit preparations ahead of the December 31 end to the standstill transition period. The agenda for this week's talks can be found here.

"Last week we provided reason for being GBP bears related to the increased speculation on negative rates in the UK. That will intensify going forward if the recovery from lockdowns does not go according to plan. But the other issue for the pound we didn’t touch on is Brexit and we expect a notable jump in focus on Brexit over the coming four weeks as the UK reaches a key moment," says Derek Halpenny, head research, global markets EMEA and international securities at MUFG. "Increased Brexit focus, plus the negative rate potential further ahead will be enough to ensure the pound continues to underperform."

Only "limited progress" has been achieved so far in the negotiations and ahead of the PM's stock-taking excercise, the government line remains that it will not entertain an extension of the Brexit transition period. Investors will be looking for signs of the PM softening on that point this week and without any such indication, the market might begin to lean heavier on the Pound, which has already fallen by -7% against the Dollar and -6% against the Euro this year.

Brexit talks come ahead of Thursday's European Central Bank (ECB) decision, which is also a risk for the Pound-to-Euro rate, one that's expected to a yield a large increase in its coronavirus-related bond buying programme. That may not be nearly as bearish a development for the Euro as it would be in ordinary times given the negative correlation between the currency and 'periphery' bond yields that might fall on the announcement of further ECB buying. Those yields have been a key focus for the Euro since the coronavirus did its worst to some of Europe's most overindebted, financially fragile and vulnerable economies, with the effect that the Pound-to-Euro rate also tends to track them.

The decision is out at 12:45 Thursday and followed by a press conference at 13:30. Both come ahead of Friday's update from Brexit negotiators which could bring the market's focus back to the prospect of something like a 'no deal Brexit' at year-end and ensure a bearish end to the week.

"It's going to be a very hectic week in markets, with US-China tensions the key driver while a number of central banks meet. The ECB will, in our view, top-up its PEPP and - in tandem with revamped hopes for EU coordinated stimulus - add steam to the EUR rally, as low-yielders may keep outpacing the USD," says Chris Turner, head of markets and regional head of research at ING.

Markets will also respond this week to increasing tensions between the U.S. and China as well as unrest in the world's largest economy amid protests over the conduct of law enforcement in some parts, which are both negatives for the risk-sensitive Sterling.

But of greater concern to the British currency should be signs of life in the EUR/USD rate that's being boosted by last week's European Commission recovery fund proposal.

This is a problem for the Pound-to-Euro rate because the exchange rate is driven by relative price action in GBP/USD and EUR/USD. More so because appetite for the single currency is growing and the Pound is increasingly lagging every other currency. A range of participants have thrown in the towel on bearish forecasts and wagers against the Euro in respose to the EU plan, while the market still expects Sterling to decline up ahead. 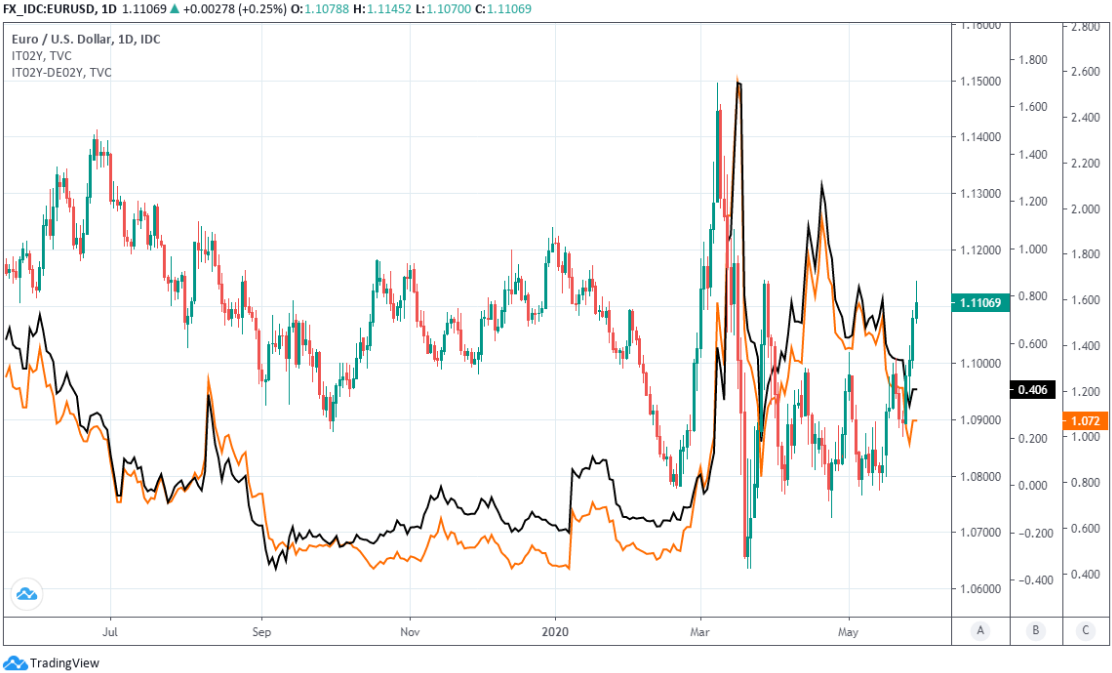 Some, with one eye on the implications the EU recovery fund might have for a Brexiting Britain, see the risks to the Pound as having risen further still and directly as a result of last week's developments in Brussels. In other words, and as much as Sterling might celebrate the partial unlocking of the economy early this week, gains could be short-lived because fundamental and political headwinds are still building for the British currency.

"Because of this plan, EU budget payments will rise, especially for the wealthier countries. From a UK perspective, a potential extension of the Brexit transition period would make the UK partially responsible for those additional payments," says Dominic Bunning, a senior strategist at HSBC. "In this scenario, the UK would be directly subsidising the long-term integrity of the EU in order to leave. This would be an anathema to most Brexit supporters. In other words, this must surely mean that the UK government is even less likely to request an extension and therefore the tail risk for GBP must have risen. This should mean the risks to EUR-GBP are biased to the upside. Therefore, we now see EUR-GBP rising to 0.92 (0.87 previously) by the end of 2020."