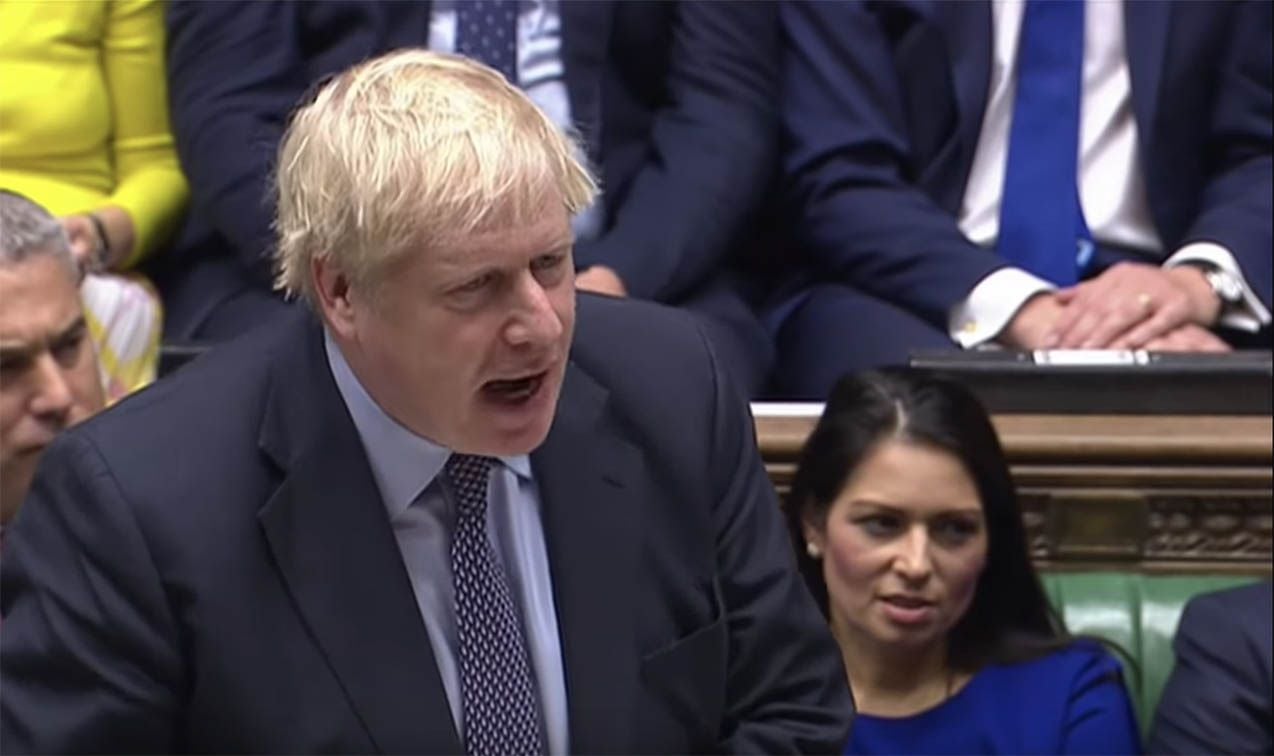 - Fundamental vote on Brexit deal due this week

Pound Sterling starts the new week softer than where it finished the previous week, and the currency faces another volatile few days, with focus remaining on the UK Parliament where MPs will potentially vote on the Brexit deal, the passing of which will almost certainly allow the currency to test fresh multi-month highs against the Euro.

Regardless of Bercow's decision, Tuesday sees a programme motion on the Withdrawal and Implementation Bill brought to the House; this is the substantive legislation required to deliver Brexit. Therefore, in theory, by Tuesday Parliament will have delivered a fundamental vote on the Brexit deal.

"UK Prime Minister Boris Johnson suffered another setback on 'super Saturday' when the UK parliament delayed the meaningful vote on his new Brexit deal. Johnson even had to ask the EU for another Brexit delay, which he did in a decidedly odd way. However, the outcome is no reason to sell UK assets or sterling, in our view," says Kallum Pickering, Senior Economist with Berenberg Bank. "Johnson still plans to pass the necessary UK domestic legislation to implement the Brexit deal and to hold the decisive vote on his Brexit deal in parliament this week, with a first vote as early as today."

There is one issue to be aware of: remain MPs could again seek to amend either pieces of legislation which could once again delay a vote on Brexit. Talk over the weekend is that Labour will try and ammend legislation to include the UK staying within the EU customs union, and the holding of a second referendum. If either of these ammendments pass it is unlikely the Government will pursue passing the legislation.

The Pound-to-Euro exchange rate is trading at around 1.1601 at the start of the new week, after rising 1.22% in the week before. Studies of the charts show the pair has reached a major ‘glass ceiling’ and a continuation of the uptrend is not a given but rather subject to a clear break above Thursday's highs. 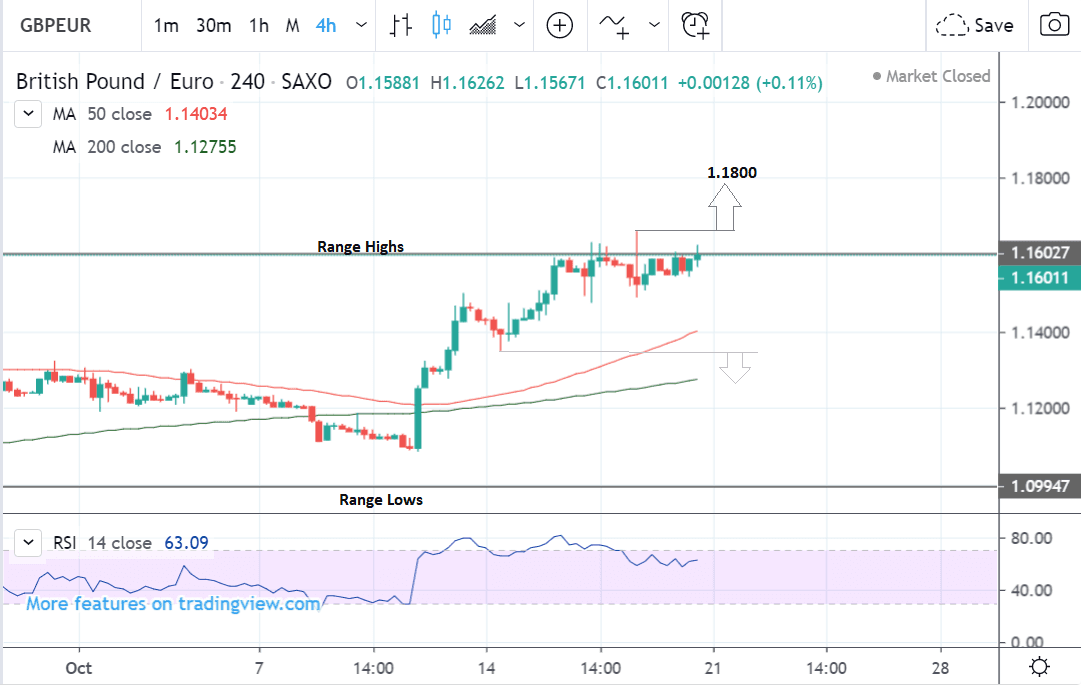 The 4 hour chart - used to determine the short-term outlook, which means the coming week or next 5 days - shows how the pair has risen up and touched the long-term range highs at 1.1600.

These highs are likely to be act as an obstacle to further gains and there is a possibility of pull-back down within the range, which might find support at 1.1500 and then 1.1400.

A break clearly above the 1.1661 October 17 high, however, would provide adequate confirmation for expecting a continuation higher to the next target for the uptrend at 1.1800.

Given the short-term trend is still bullish and ‘the trend is your friend’ according to the market saying, there is still a chance at this point of a continuation higher, regardless of resistance from the range highs.

The daily chart suggests more upside on the horizon for several reasons. 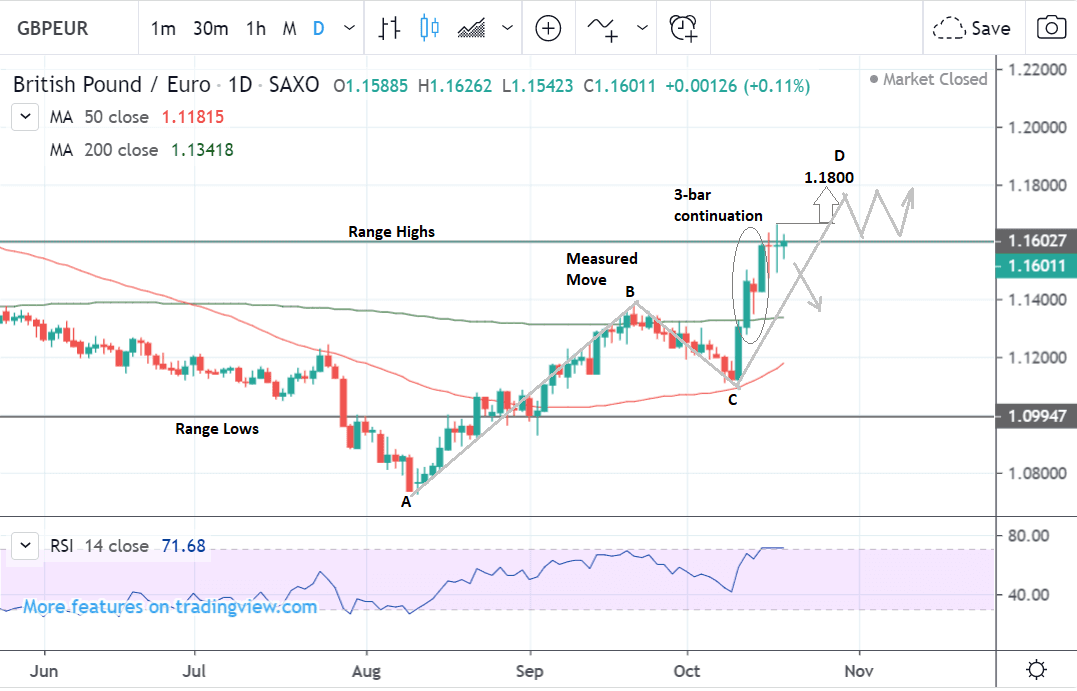 The first is that the pair has formed a bullish ‘measured move’ or ‘ABCD’ pattern which is a three-wave zig-zag pattern higher.

These patterns are useful for forecasting purposes as the first (A-B) and third (C-D) waves tend to be of equal length, so the length if A-B can be used to forecast the length of C-D and the eventual endpoint of the move.

The other bullish sign is the 3-bar continuation set-up which formed last week (circled) and which suggests a target of between 1.1700 - 1.1750.

3-bar patterns are quite rare but fairly reliable and subject to a break above the 1.1661 confirmatory level a move up to the aforesaid target zone is forecast.

The RSI momentum indicator in the bottom panel is constructive and not diverging bearishly - which suggests the uptrend has underlying strength.

If the pair successfully rises up and touches the 1.1800 target there is then a risk it could pull-back down to support at 1.1600 and consolidate sideways for a while before continuing higher.

The weekly chart shows the pair having risen up and then stopped right at a major resistance point where it intersects with range highs and the 200-week moving average (MA). 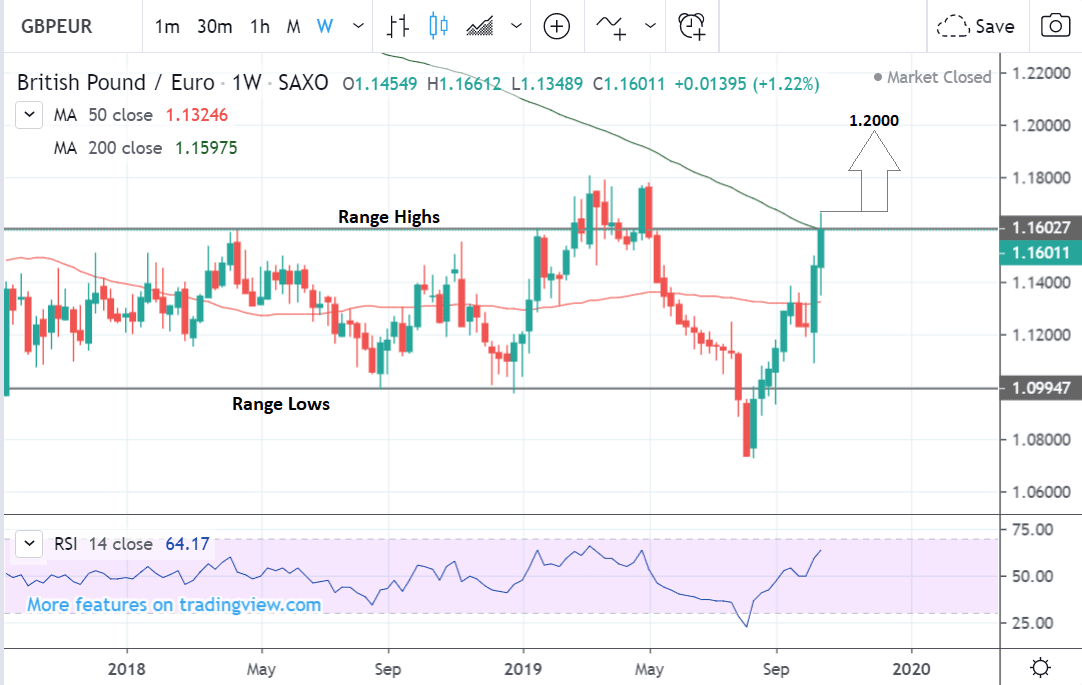 Because of the combination of this is likely to prove a tough obstacle limiting further upside since major MAs are also tough resistance levels on charts in themselves.

As mentioned above, however, a break above the 1.1661 highs would probably provide confirmation of extension of the uptrend above this zone of resistance to a higher target, and in the long-term this target might be at 1.2000.

The main event for the Euro is the European Central Bank (ECB) policy meeting; the main data releases are October PMIs and the German IFO business sentiment survey on Friday.

Preliminary estimates of October PMIs are probably the most impactful release for the Euro in the week ahead.

Manufacturing and Services PMIs are expected to show a rise to 46.0 and 51.9 respectively when released on Thursday at 10.00 BST, from previous readings of 45.7 and 51.6.

If they come out higher, as expected, the data might support the Euro as it rallies higher versus the U.S. Dollar.

The key event is the ECB meeting on Thursday at 12.45 but the impact on the Euro may be muted.

The ECB is not expected to change policy in October despite easing policy in September and the picture painted by the economic data since then mainly worsening after September PMIs undershot expectations and showed contagion from already weak manufacturing into services.

It is Mario Draghi’s last meeting as the president of the ECB before he hands over to Christine Lagarde although given the large scale initiatives announced in September he is not widely expected to want to go out with a policy 'bang'.

“We do not think the ECB will ease policy further at this upcoming meeting but do we think another 10 bps rate cut is coming in December,” says U.S. bank Wells Fargo. “Past that, we are skeptical the ECB will do much more, as its policy capacity with typical monetary policy tools, like rate cuts and QE, are clearly running low. At present, the Eurozone is running a consolidated budget deficit of about 1%, with some countries, such as Germany, in surplus. It looks increasingly likely that any meaningful positive policy shock will need to come from the fiscal side of the equation.”

The German IFO business survey may shed more light on the plight of the slowing German economy when it is released on Friday at 9.00.

The headline Business Climate Index is forecast to nudge lower to 94.4 from 94.6 in October.

The IFO is seen as a leading index for the economy. A substantially higher or lower result could even impact the outlook for the Eurozone economy given the importance of the German economy to the block, and therefore the Euro.