- GBP/EUR forms price pattern which could be bearish or bullish

- Breakout higher could lead to reversal

- Pound to be moved by labour data

The Pound-to-Euro exchange rate is trading at around 1.1140 at the start of the new week virtually unchanged from the week before, with studies of the charts suggest the pair is at a crossroads with forces evenly balanced.

The 4-hour chart - used to assess the short-term trend, which includes the next 5 days -
shows the completion of a triangular or wedge-shaped pattern.

This is a significant technical development which could either signal the dominant downtrend has one more leg lower to go (in the case of a triangle), or that the pair is in the process of reversing trend higher (in the case of a wedge). 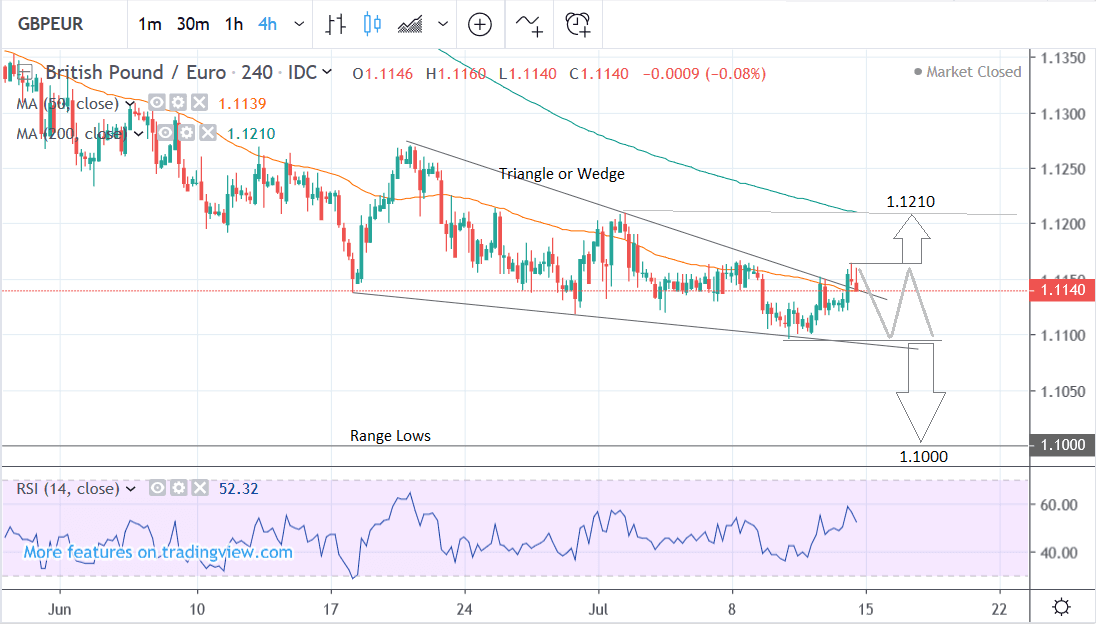 Over the last two sessions the pair has broken above the pattern’s upper border which could be indicating it is breaking out higher, and supports the idea the price pattern may be a wedge with bullish connotations.

A continuation higher, therefore, and a further break above the recent highs at 1.1165, would probably provide confirmation of a move to a possible upside target at 1.1210, at the July highs.

Alternatively, it is possible the pattern is a bearish triangle, preceding the last leg of a downtrend, down to a target at the 1.1000 range lows, with a break below the 1.1100 level providing confirmation of more downside.

If neither confirmation levels are broken then there is also a chance the pair could continue unfolding in a more-or-less sideways move between the 1.1100 and 1.1165 levels in the short-term.

The daily chart is showing the pair is in a steady downtrend which has lost momentum over recent periods but still overall continued to make new lows at intervals. 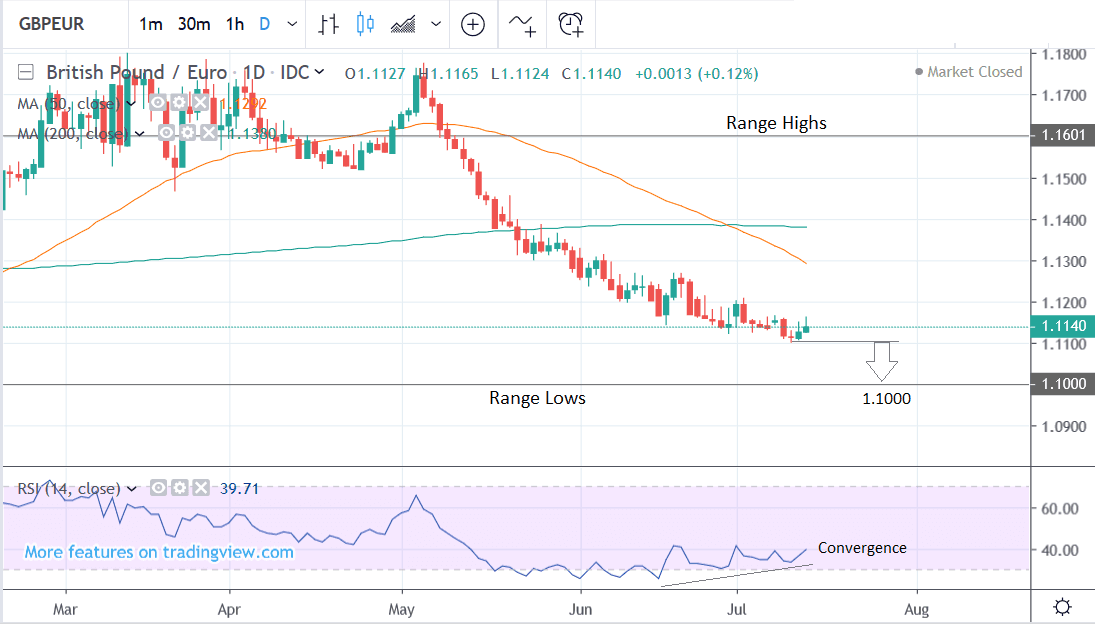 We see a continuation of this downtrend as overall more likely, despite increasing risks of upside.

The evidence from the chart is contradictory: although the downtrend is intact and strong it has lost a lot of momentum recently and there is an increased risk it could reverse.

The RSI momentum indicator in the lower panel is converging bullishly with price which means price is making new lows but RSI is not following suit.

The non-confirmation between the two creates the convergence and can be a bullish sign for the price. Although it is not necessarily a strong reversal signal, it is a sign the pair could recover temporarily, at the very least.

Because trend trumps all other considerations, however, our base case remains for a continuation of the entrenched downtrend to the long-term range lows at around 1.1000, subject to confirmation from a break below 1.1100. 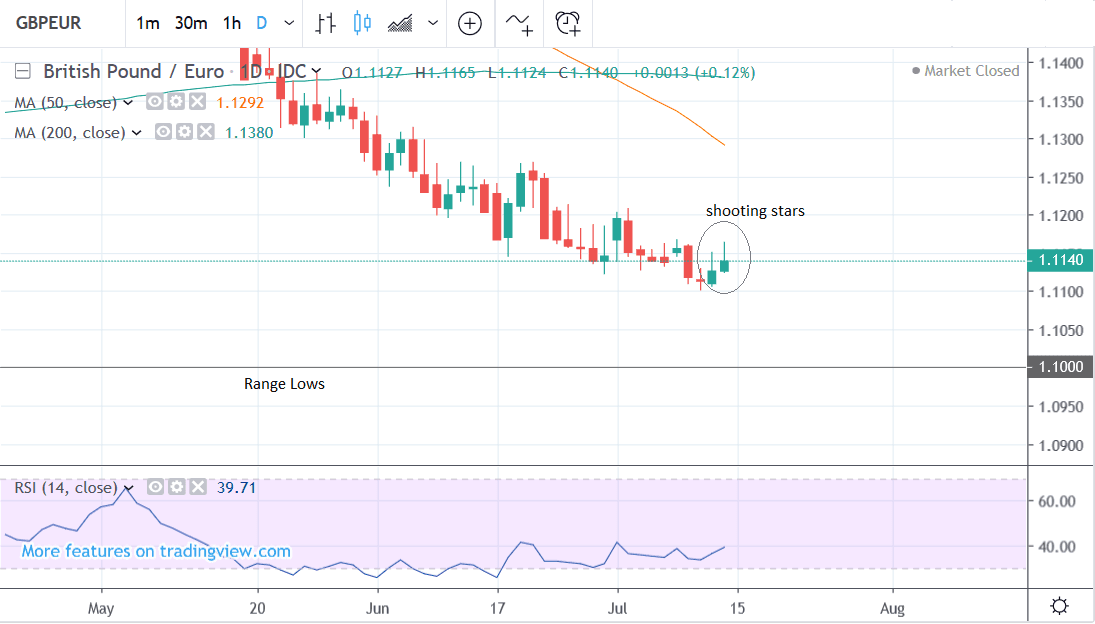 We use the daily chart to analyse the outlook in the medium-term which is defined as the next week to month.

The weekly chart shows the pair having completed its 10th week of declines. 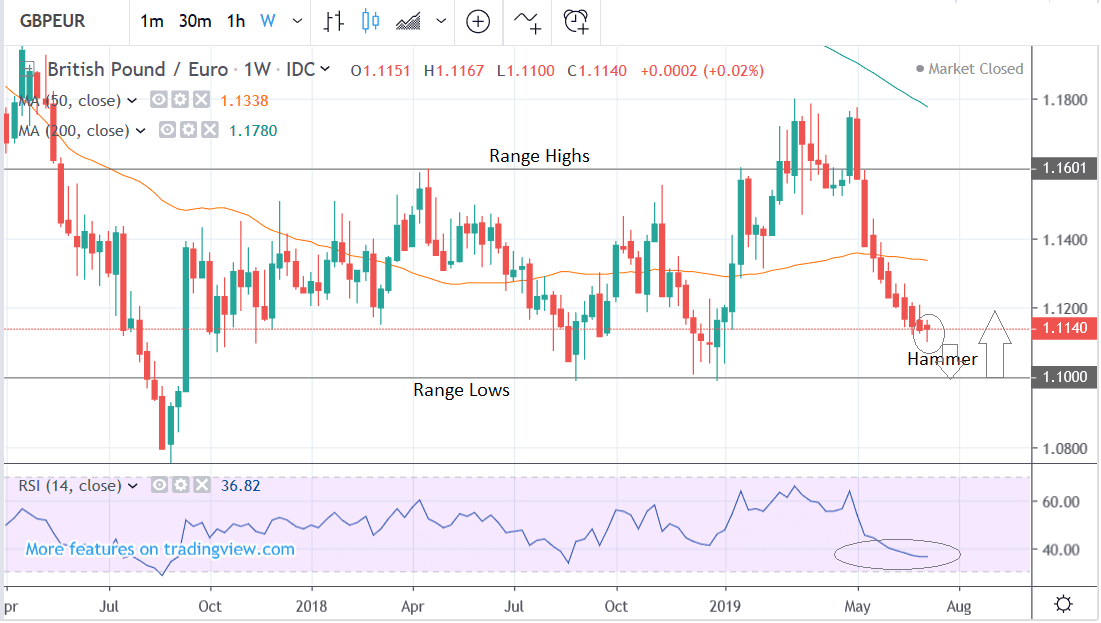 Again, signs are mixed. The overall trend is down but the pair formed a bullish hammer candlestick last week which could be signaling a bottom is in place. The hammer was not particularly long or strong but it is still worth mentioning.

The RSI momentum indicator (circled) is also looking increasingly like it may be rounding out a bottom, with the possibility of a gentle climb occurring over the forecast horizon, mirroring a similar recovery in price.

There is, therefore, a growing risk of a rebound, if only temporarily, as the market readjusts and finds a new equilibrium level, or as traders lose out bearish-bets ahead of the approaching key range low.

In any case, a move down to 1.1000 would probably lead to a bounce back up within the established range, back up towards the 1.1600 highs.

The weekly chart is used to analyse the long-term trend which is defined as the next several months of market action.

The winner of the Conservative leadership election is not scheduled to be announced until July 22, so the Pound will probably be less affected by Brexit news in the week ahead and attention may shift to hard data instead.

On that front, there are three major releases, including labour market data out on Tuesday, inflation on Wednesday and retail sales on Thursday.

UK data has deteriorated recently, especially the PMI survey data which is seen as a reliable leading indicator of harder economic data and growth. Having said that, May GDP surprised to the upside, coming out at 0.2% when analysts had anticipated a 0.1% rise.

The last speech from Mark Carney, the governor of the Bank of England (BOE), was less optimistic and suggested the BOE was finally joining the rest of the ‘pack’ of central banks in adopting a preference for lower interest rates, mainly due to fears about global growth. This marked a turnaround from the previous bias of the BOE to raising rates.

On Tuesday, UK labour market data is forecast to show the unemployment rate still at 3.8%, another 22.9k jobs added to the economy and average wages rising by 3.1% in June, when it is released at 9.30 BST.

The data is at a fairly strong starting point so only an unexpected decline would dent Sterling - anything within expectations or higher would probably keep the currency supported.

Keep an eye on wage dynamics in particular as the rule-of-thumb in economics is that rising wages tend to lead to higher inflation, which prompts the central bank to raise interest rates to keep a lid on prices. And, a side effect of higher interest rates is a stronger currency. 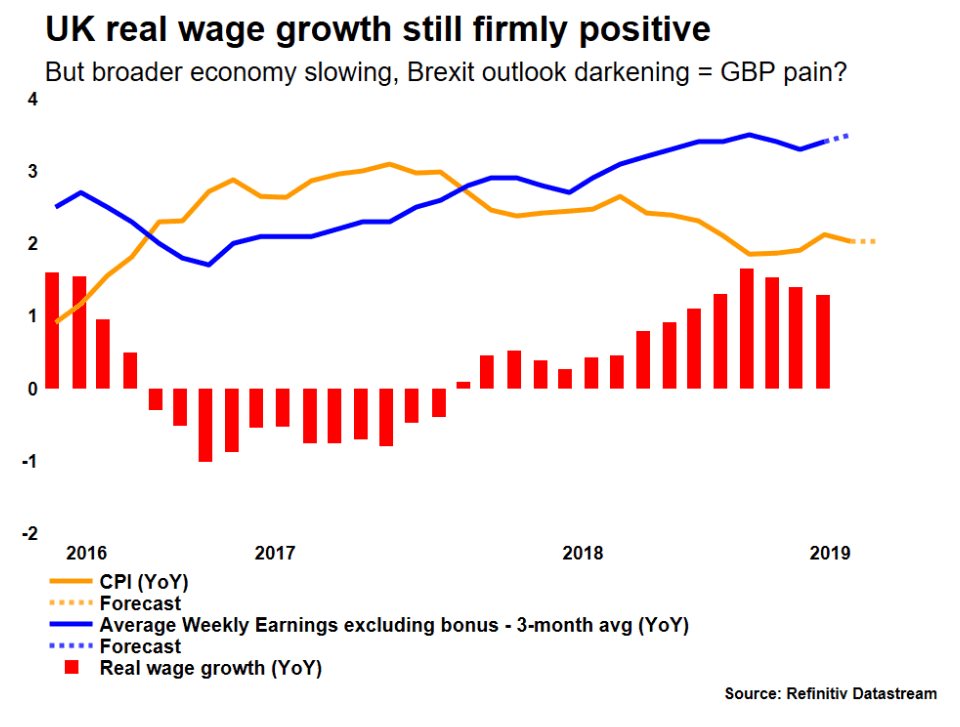 The UK's wage dynamic has been a source of support for Sterling over recent months, with wages now easily oustripping the inflation rate which has in turn prompted expectations for a Bank of England interest rate rise in coming months.

The risk is that wage increases start fading in strength, which deprives the under-pressure Pound of one of its last remaining elements of support.

Inflation data out on Wednesday at 09:30 B.S.T. will be another key release to watch for Sterling, with a beat on expectations likely to prove supportive and a weaker-than-forecast figure likely to weigh.

Markets are looking for annualised CPI to read at 2.0%, bang on the Bank of England's mandated target.

Month-on-month inflation for June is forecast to show price increases of 0.3%.

The next most important release is retail sales data which is expected to show a -0.3% decline in June compared to the month before when it is released at 9.30 on Thursday.

Retail sales have been falling recently and survey data for June from the British Retail Consortium (BRC) suggests the decline will probably continue.

“Recent confidence surveys suggest the underlying trend in the retail sector remains soft, and the consensus expects another decline, of 0.3% month-over-month in June,” says Wells Fargo in a preview note.

A bigger-than-expected decline would stoke UK slowdown fears and weigh on the Pound.

The Euro's Week Ahead: ZEW Survey

The main releases in the week ahead for the Euro are trade balance data due out on Tuesday, the ZEW sentiment index also on Tuesday and the second estimate of June inflation data due on on Wednesday,

The ZEW is a survey based sentiment indicator which asks 350 financial professionals for their views on the outlook for the economy. There is ZEW for Germany and the Eurozone.

The ZEW for the Eurozone unexpectedly plummeted to -21 in June when forecasters had expected it to only fall to -3.6. It is expected to stay at a similar level in July of around -20.0. The release is out at 10.00 BST on Tuesday morning.

A worse-than-expected result would be negative for the Euro and vice versa for a better result.

Inflation data is forecast to stay at 0.1% on a monthly basis in June when the second estimate is released on Thursday at 10.00. CPI is forecast to have risen 1.2% compared to a year ago.

Core inflation is forecast to remain at 1.1% compared to a year ago.

Inflation recovered in June, with core inflation rebounding a surprising 30 basis points from 0.8% to 1.1%, so investors will be watching as to whether these gains can be sustained through the revisions.

Despite inflation being viewed by traditional economics as a negative effect, higher inflation would actually support the Euro due to the impact inflation has on interest rates and therefore net foreign capital inflows.

The Eurozone trade balance has been trending lower over recent years. It came out at 15.7bn Euros in April and investors will probably be expecting a lower figure in May as trade winds bite. The impact on the Euro is likely to be marginal if any, as the metric is a background influencer of economic conditions rather than a direct driver itself.