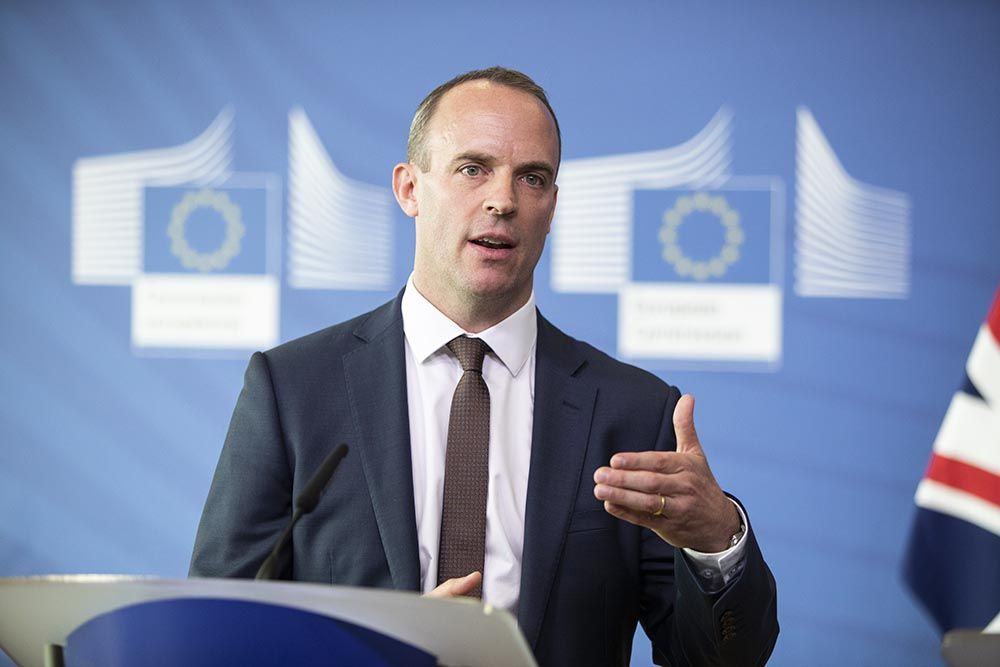 - Risk of leadership challenge rises, Bill may not pass through parliament.

The Pound-to-Euro rate plummeted Thursday after the Prime Minister's Brexit Secretary resigned from office, triggering a wave of other departures and leading markets to fret that the risk of a "no deal Brexit" is rising rapidly.

Brexit Secretary Dominic Raab has resigned in protest at Prime Minister Theresa May's proposed EU withdrawal agreement, which sets out terms of the U.K.'s departure from the European Union.

In a letter, Raab said he cannot support the PM's proposals because, in his view, they threaten the "constitutional integrity" of the U.K. and hand the European Union a veto over the nation's departure from the bloc.

He also states he cannot reconcile the PM's proposals with the pledges made by her ahead of the 2017 general election.

"Today, I have resigned as Brexit Secretary. I cannot in good conscience support the terms proposed for our deal with the EU. Here is my letter to the PM explaining my reasons, and my enduring respect for her," Raab says, in a Twitter post.

Today, I have resigned as Brexit Secretary. I cannot in good conscience support the terms proposed for our deal with the EU. Here is my letter to the PM explaining my reasons, and my enduring respect for her. pic.twitter.com/tf5CUZnnUz

The upshot for financial markets is that there is a rapidly growing risk the Prime Minister will not be able to garner enough support for her to move the Withdrawal Bill through parliament.

This means the threat of a widely-deprecated "no deal Brexit" is rising because without the Withdrawal agreement in place, the U.K. will depart the EU on March 29, 2019 and default to trading with it on World Trade Organization terms. Most analysts say this would be bad for the U.K. economy.

"Raab’s resignation has sent shockwaves through the market and will have come as a surprise to Theresa May. While we expected resignations, Raab was seen by many as a key ally to May’s premiership. This has highlighted how difficult the situation is for Theresa May, and with the DUP teetering on the edge, a leadership challenge could be imminent," says Hamish Muress, a currency analyst at trading firm OFX. 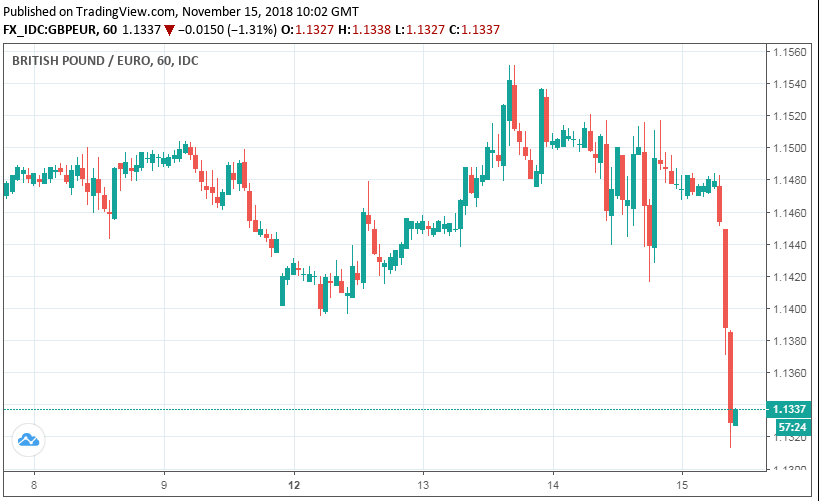 "We are entering highly uncertain times for domestic British politics and Brexit: the Pound hates uncertainty of this kind and the outlook for the currency is challenging," says Harry Wills, a dealer with Horizon Currency Ltd.

Wills is fielding questions on what the latest developments mean for those with international payments and can be contacted at This email address is being protected from spambots. You need JavaScript enabled to view it.. 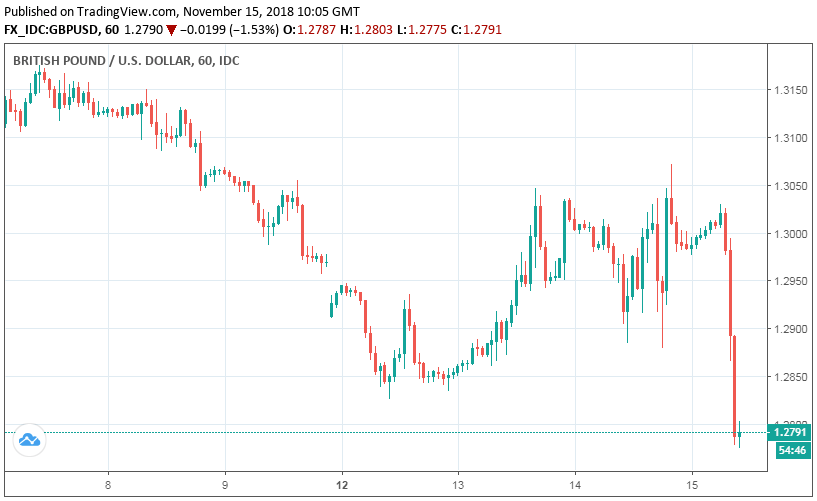 "A more pressing test for PM May is that it appears likely she could face a vote of confidence in the coming days. It would heighten downside risks for the pound if she is defeated. We would expect PM May to win but the extent of opposition to her Brexit deal would still be evident," warns Lee Hardman, a currency analyst at MUFG.

Raab's resignation comes after Conservative Party MP Anne Marie Morris told Newsnight it is most likely that a sufficient number of MPs have now submitted to an influential committee, letters of "no confidence" in the Prime Minister. This could ultimately see a leadership challenge triggered over coming days.

“(My belief is that…) we do have the 48” - Anne Marie Morris, from the Conservative European Research Group, tells Emily Maitlis she believes the 1922 committee does have the numbers it needs to trigger a vote of no confidence@AnneMarieMorris | #newsnight | @maitlis pic.twitter.com/QV9SK1pc32

It also follows on from a string of other departures, including that of Northern Ireland Minister Shailesh Vara and Nikki Da Costa.

Notably, Da Costa is a Downing Street operative tasked with organising the passage of legislation through parliament under May's minority government, which relies on the Northern Irish Democratic Unionist Party for a majority.

Suella Braverman, a Department for Exiting the EU minister and one of the few Brexiteers to have still backed PM May after her "Chequers" proposal became known, has now departed too.

It is with deep regret and after reflection that I have had to tender my resignation today as a Brexit Minister. Thank you for the opportunity. I look forward to working to support Brexit from the Backbenches. This has not been an easy decision. pic.twitter.com/C0kply8aLE

"Such an environment characterised by the material division on the UK political scene (among the parties as well as among the ruling Conservatives) suggests caution towards GBP ahead of the eventual Parliament vote on the Brexit deal (likely in December)," warns Chris Turner, head of currency strategy at ING Group.

The Withdrawal Deal, in the Library, with a Candlestick

PM May's withdrawal proposal will see the U.K. pay an estimated £38 billion "divorce bill" in return for two years of continued membership under the guise of a "transition period". But there is little in the withdrawal agreement to appease members of parliament and the public who voted to leave the European Union.

The Prime Minister made her view clear in an open letter Wednesday. She sees her choice, as well as the U.K.'s, as being between her proposed Brexit deal and "no Brexit at all".

"I agreed with her Lancaster House speech that this should be built around the ability of the U.K. to take back control of our laws, borders and money while safeguarding our precious union," says Jacob Rees-Mogg, an influential backbench MP and spokesperson for Conservative Party Brexit supporters. "Unfortunately, the proposals for a UK/EU agreement released today do not match up with those early expectations."

Opposition Labour Party leader Jeremy Corbyn has also savaged the proposals, potentially with one eye on the still-moving odds of him being able to force another general election over the coming months.

This is a bad deal which isn't in the interests of the whole country. #WithdrawalAgreement #BrexitChaos pic.twitter.com/vfUK2DgGUY

And members of the Democratic Unionist Party, on whose support PM May's government relies for its majority, have also savaged the proposal.

The choice is now clear.

May's proposal commits the U.K. and Northern Ireland to a form of two-tier customs union and single market on an indefinite basis if a deal covering future trade cannot be reached within the so called transition period currently intended to run between March 29, 2019 and December 31, 2020.

The only circumstance in which the U.K. could end those arrangements is with permission of the EU. Absent that permission, the U.K. will remain bound by law and regulation covering goods and other parts of the legislature without any ability to influence or control the design or application of those rules.

This hands a de-facto veto on the U.K.'s bid for independence from the EU, to the EU. It also removes any incentive that the EU may have had to negotiate any other kind of arrangement, because as far as the financial and trade aspects go, the withdrawal deal makes the post-Brexit landscape about as good as it could get for Brussels.

"This is a historic betrayal. Theresa May has made Neville Chamberlain look like Winston Churchill. From day one of the so-called negotiations, UKIP warned that the Prime Minister and her government never had any intention of achieving a real Brexit and this 'deal' confirms everything we said," says Gerard Batten, leader of the United Kingdom Independence Party, an anti-establishment party that ran a decades-long campaign for a referendum on EU membership.

Ministers will not be able to adapt the U.K.'s external trade tariff rates under the proposal, as those will be set in Brussels, and the nation will be bound to follow diktats on all manner of things ranging from financial support government provides to companies, tax policy and the decisions government might want to make around employee rights, to name just a few.

This will hamper the U.K.'s ability to boost its competitiveness after March 2019 and could even lead to it becoming less competitive on the global stage.

Should the EU's policies on taxes prevent the government from responding to things like President Trump's tax cuts, or were its policies on "social rights" to drive up the cost of employment for businesses, then the economy could suffer. And in any case, the U.K. would certainly not be independent from the EU.

"This agreement amounts to the total capitulation of our country to the interests of the EU. What little freedoms we have been told to have 'won' will be controlled by a government which has demonstrated time and again that it is more than happy sell out the interests of the British people," Batten adds. "UKIP stands alone as a party committed to a real Brexit. The 17.4 million people who voted to leave must back UKIP or Brexit is finished."