RBC Capital Markets have put out some useful pointers on the potential economic remifications for both the European Union and United Kingdom should Brexit become a reality in mid-2016.

The economic debate on the impact of a UK exit from the European Union has exploded into life and there is no shortage of warnings coming from UK big business.

At Pound Sterling Live we are looking to cut through the noise and bring as much of a balanced view as possible. That is why the view at Capital Economics/Woodford Funds that Brexit is economically a nil-sum game must be considered.

And what about Europe? Will they lose out if the UK leaves?

The 'In' camp have good reason to ignore any potential negative impacts of an 'Out' vote for European nations. If European countries stand to lose economically then it goes without saying they too would seek the best possible trade deals with the UK in a post-Brexit world.

This does not fit with PM Cameron's '10 years of chaos' argument.

We summarise the findings of Cathal Kennedy, European Economist, at RBC Capital Markets on whether Brexit will actually make a substantial change to the EU and UK economies, particularly in terms of trade.

Euro area GDP is almost five times UK GDP which suggests that the UK economy is more exposed to the euro area than vice versa.

But there are still a number of channels through which a Brexit would impact on the euro area.

The main impact of Brexit on the euro area would be felt via the trade channel – the UK is the euro area’s largest export market accounting for 15% of external (goods) exports and making a positive contribution to the growth of euro area exports. 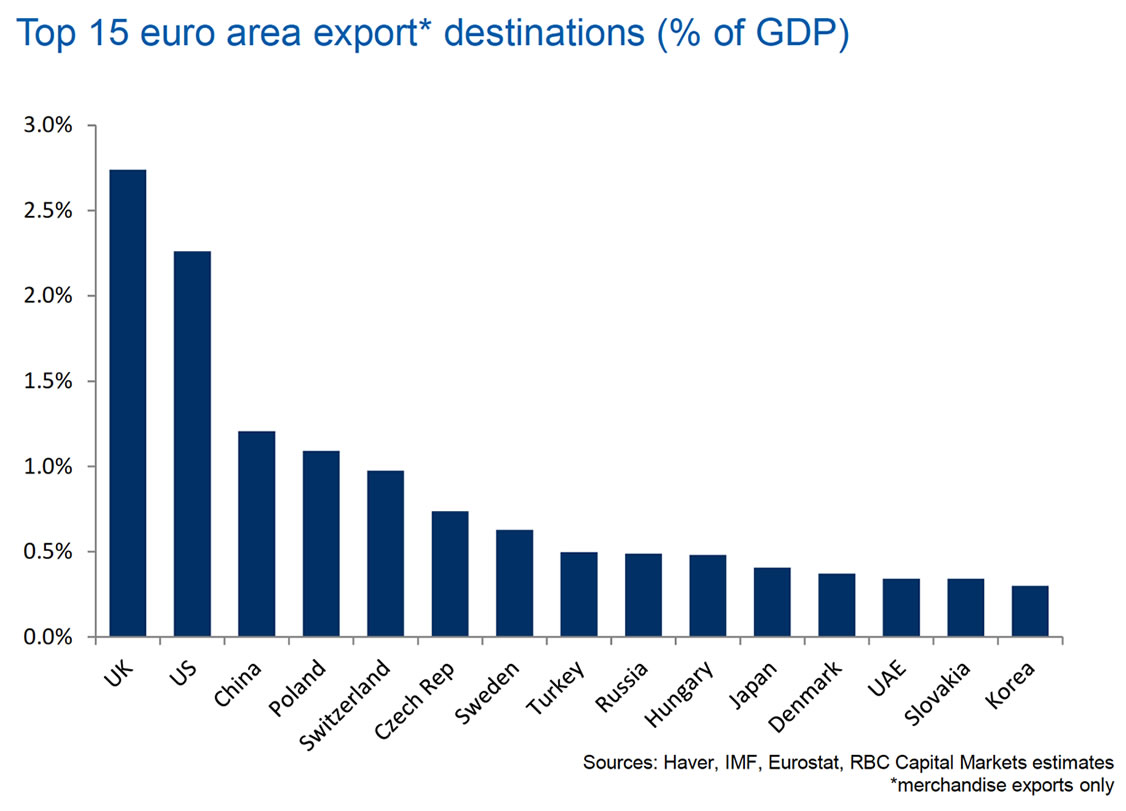 But the value of (goods) exports to the UK represent less that 3% of aggregate euro area GDP.

However, it is still a ‘shock’ to UK trade that would have the most immediate, direct, impact on near-term euro area growth.

Which EU Countries are Most at Risk of Trade Disruption?

Ireland is the euro area country most exposed to Brexit.

It is particularly exposed via the trade channel with exports to the UK accounting for almost 15% of total exports.

Ireland also has large exposures via the labour market and investment.

The Netherlands has relatively large exposures in terms of both inbound and outbound investment and significant trade links.

However, RBC Capital caution that data distortions probably overstate the extent of the Dutch economy’s exposure to the UK.

Cyprus, with large trade, investment and labour markets exposures, and Malta, with a large stock of investment in the UK, are the other member states with large exposures.

Germany’s trade exposures to UK are significant; exports to the UK are 3% of GDP, higher than the euro area average.

It is also likely that the volume of German exports to the UK is understated in the data; some German trade is likely to be ‘booked’ as Belgian and Dutch exports as it passes through ports there.

Often identified as a potential benefit for the euro area of Brexit is the relocation of some parts of the UK financial services sector if, post-Brexit, access to the EU single market were lost.

While some individual financial centres may benefit from relocation, at an aggregate level this would be unlikely to compensate for a major disruption to trade, particularly as only a portion of activity would likely be forced to move.

Of the other Brexit exposures, investment is the most significant after trade – the stock of euro area FDI in UK is equivalent to 6% of euro area GDP while the UK is a major source of FDI for the euro area.

"But we would expect that a post-Brexit UK would want to remain open to investment and that the euro area would remain a destination for outbound UK FDI as a large, and geographically close, market," says Kennedy.

The future of the UK/EU trading partnership should the UK vote to leave rests with whether or not the UK remains within the single market.

We thus have two post-exit scenarios posited by RBC Capital.

2) Brexit, coupled with the UK remaining within the single market, would likely only have minimal impact on euro area trade with the UK

RBC expect that a post-Brexit UK would want to remain open to investment and that the euro area would remain a destination for outbound UK FDI as a large, and geographically close, market.