Foreign investment demand for UK assets will remain as robust as ever in the event of the UK leaving the European Union it is argued by an influential think tank.

One of the UK's most prominent investors Neil Woodford says that based on the reports he has commissioned, and further research he has read, it is pretty clear the economic impact of a Brexit will ultimately be a "nill sum game."

The fundamentals of the UK economy will be ultimately unchanged, however there is the chance that the currency will be weaker if the UK leaves.

The big downside risk to the British pound of a British exit is perceived to be via the impact the move would have on Foreign Direct Investment (FDI).

FDI is the pipeline that keeps foreign exchange flowing into the country in the face of the country’s structural trade deficit. In short, we do not export enough to generate the demand for sterling needed to keep the currency at its current levels. 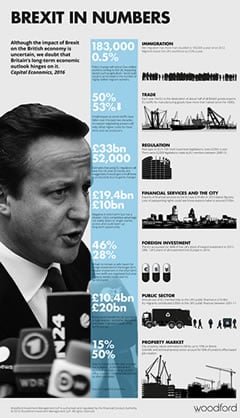 Brexit proponents argue that exiting the European Union would disrupt the flow of foreign investment into the country and undermine the pound.

So far there are indications that Brexit is yet to impact confidence in the UK as a FDI destination.

The worry is that this could change.

“The main fear here seems to be that, if the United Kingdom voted to leave, foreign direct investment inflows would dry up and parent companies may even close-up shop and move production or offices elsewhere,” says a report on the matter released by Woodford Funds.

Yes Europe matters for foreign investment inflows, but it doesn’t matter as much as it used to.

However, inflows of foreign direct investment from European Union countries have been slowing over recent years and more investment has been flowing in from non-member countries as the below graphic indicates.

“We think that these concerns are overblown,” says a note issued by Woodford Investment Management, the fund set up by Neil Woodford, the highly-regarded British investor.

“They are predicated on the assumption that, on leaving the European Union, Britain would be hit with a swathe of harsh tariffs which would make it costly to export to member countries,” says the note.

The report was commissioned and presented by Woodford but produced by Capital Economics.

The report argues that tariffs on exports to the European Union remain generally low for non-member countries.

“Moreover, these fears don’t take into account the fact that firms choose to invest in Britain for a myriad of reasons, not just for its access to the single market, and that they do not just invest in projects for the production of physical goods,” says the note.

In short, overall foreign direct investment flows will hold up rather better than is sometimes suggested.

It is noted that factors such as the legal system and the language, as well as the size, liquidity and transparency of the British market are not a function of our European Union membership.

Implications for the British Pound

If what the report says is correct then some of the hefty negative forecasts on sterling could be overblown.

Of course there is the possibility that the shock of an out vote would play havoc with exchange rate markets but when the dust settles and reality settles in the UK currency could regain lost FDI support.

Indeed, a weaker sterling could be just the ticket to stimulate demand for UK goods and boost the UK export sector which could certainly benefit from a weaker currency.

"Funnily enough, if the currency is weaker for a period that is going to be partially stimulative for the economy, so it might actually work out to be good news, certainly for Birtish exporters who need all the help they can get at the moment," says Woodford.