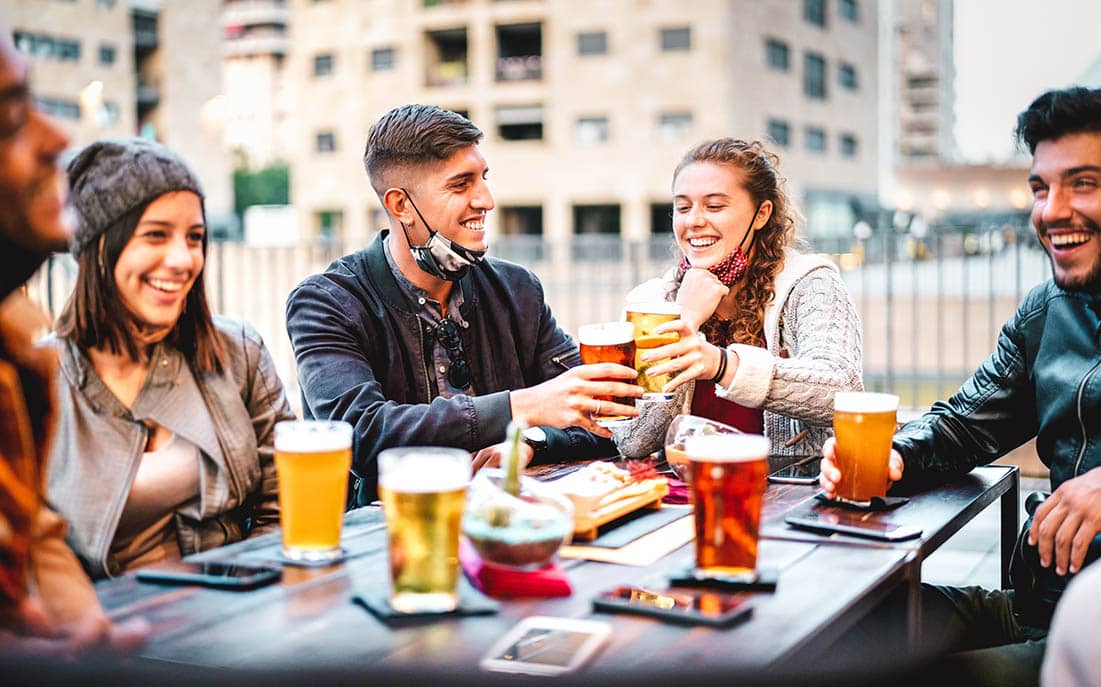 The Manufacturing PMI for September read at 56.3 which is down on August's 60.3 and below the consensus forecast for 59.

The Services PMI for September read at 54.6 which is down on August's 55.0 and below the consensus estimate for 55.

The Composite PMI - which balances the PMI numbers to better represent the economy's composition - read at 54.1 which is below August's 54.8 and below the consensus estimate for 54.5.

The data therefore confirms economic expansion continued to slow in September and it did so at a faster pace than economists had expected.

"The initial boost from reopening is now fading fast," says Bethany Beckett, UK Economist at Capital Economics, "increasing the downside risk to our forecast for the economy to return to its pre-pandemic level by October." 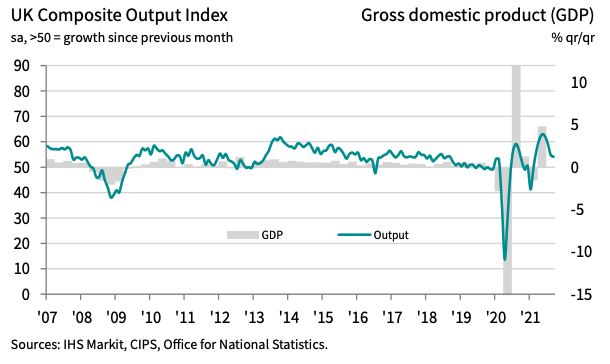 Service based companies however reported improving customer confidence and an ongoing recovery from the COVID-19 pandemic as being behind the ongoing expansion.

The hotels, restaurants and catering sector posted a particularly strong expansion in activity.

Employment dynamics remain constructive as firms continued to expand their staffing levels at a rapid pace, particularly in the service sector where the rate of job creation was only slightly weaker than August's series record.

The numbers tally with short-term data from the ONS and Adzuna that shows elevated vacancy levels amidst staff shortages. 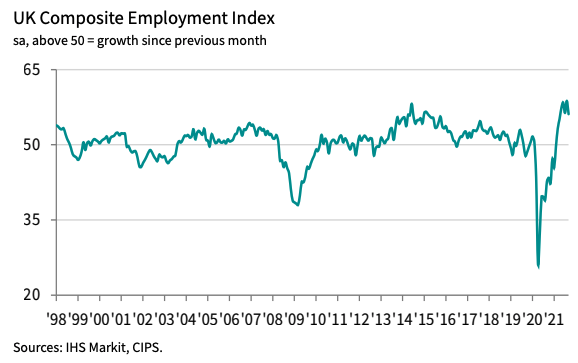 Wage costs are rising as a result of strong demand and a limited pool of available workers, with the PMI data showing wage inflation was accelerating input inflation for UK businesses.

As a result, "companies raised their own selling prices at the strongest pace on record."

Beckett at Capital Economics says "at face value, the latter is consistent with CPI inflation jumping from 3.2% in August to a peak of around 6%."

This would represent a substantial breach of the Bank of England's current peak inflation forecast of 4.0% and risks unanchoring inflation expectations to above the Bank's target level of 2.0%.

Economic expansion should nevertheless continue with businesses saying they remained confident on what the next 12 months would bring.

Some economists say the slowing PMIs add to further evidence that will allow the Bank of England to forgo raising interest rates in the first half of 2022, thereby disappointing market expectations.

"The further fall in the composite PMI in September strengthens the case for the MPC to give the economic recovery more time to develop by not rushing to raise Bank Rate at the start of next year, as markets currently expect," says Samuel Tombs, Chief UK Economist at Pantheon Macroeconomics.

The data is released just hours ahead of the Bank's September policy update, that comes amidst signs of a slowing rate of economic expansion but amidst surging inflationary levels.

Arguments for a rate rise would include an increasingly tight labour market and signs - as per the above - that a degree of inflationary pressure is being driven by wage growth.

Although supply chain difficulties and labour shortages are slowing the expansion Tombs says the primary cause of the slowdown is weakness in demand.

"With households’ real disposable income set to fall by about 1.5% quarter-on-quarter in Q4, as labour income drops with the closure of the furlough scheme, inflation picks up and Universal Credit payments are reduced, the pace of the economic recovery looks set to remain sluggish through the winter," says Tombs.