UK spending via debit and credit cards rose sharply in the week following the April 12 unlocking of the UK economy, suggesting a significant consumer-lead economic revival is underway.

In the week to 15 April 2021, the CHAPS-based indicator of credit and debit card purchases in aggregate increased by 8% from the previous week to 91% of its February 2020 average, says the ONS.

In the previous week the level stood at 83%.

Spending on delayable goods (such as clothing and furnishings) increased substantially by 26% in the week to 15 April to 89% of its average February 2020 level.

Card spending on staples was at 112% of its February 2020 average level. 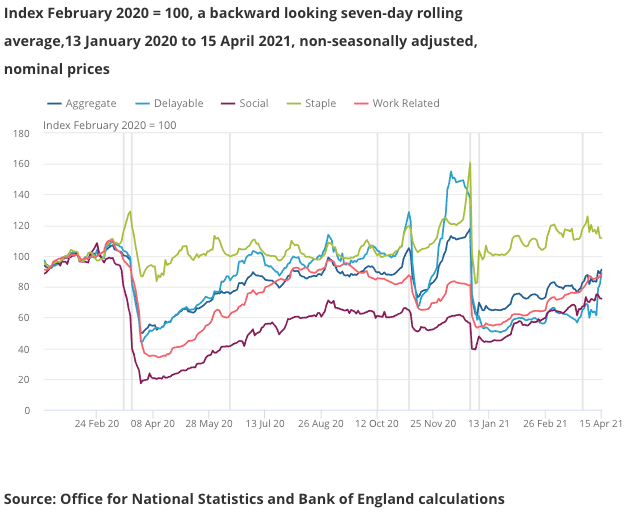 The Clearing House Automated Payment System (CHAPS) is one of the largest high-value payment systems in the world and has been administered by the Bank of England since November 2017.

The rise in spending comes after the government allowed the reopening of 'non essential' retail outlets, gyms and some elements of the hospitality industry.

With over 60% of the adult population having now received at least one vaccinated, and a third of these now fully vaccinated, the reopening process remains on track with the next phase of reopening pencilled in for May 17.

Seated diner reservations in the UK on Saturday 17 April 2021 were at 60% of the level on the same Saturday in 2019, according to Open Table UK.

Overall UK retail footfall in the week to 17 April 2021 increased 31% from the previous week to 75% of the level seen in the same week of 2019, according to Springboard data.

Growth in activity should be further bolstered as restrictions on mixing indoors is lifted, allowing a full reopening of the hospitality sector.

Foley's call comes ahead of Friday's PMI data for April that will offer the first significant survey of the UK's economic performance since major restrictions were lifted on April 12.

Expectations for a strong reading have risen this week, prompted by indications that the economy is rediscovering its feet with Google mobility data showing a sharp rise in activity.

While the data continues to show that mobility around venues such as restaurants, cafés, shopping centres, theme parks, museums, libraries and cinemas in the UK remains significantly below the pre-pandemic baseline, last week also brought a marked improvement from recent levels.

Current activity is 30% below the pre-pandemic baseline measure which compares with a recent low of closer to 70%.

Economists say the UK economy will undergo a strong economic rebound in the second quarter of 2021 as further restrictions are loosened, with the vaccination programme providing confidence that further lockdowns will not be necessary.

"The strong rebound in activity since England reopened non-essential retail and outdoor hospitality in mid-April adds credence to our above-consensus forecast for GDP growth of 7.2% this year," says Andrew Goodwin, an economist at Oxford Economics.

The consensus for 2021 UK economic growth has continued to rise (up to 5.3% according to the April HMT survey), but Oxford Economics say most forecasters are too pessimistic about growth prospects and their forecast that GDP will grow by 7.2% in 2021 looks to be on track.