Goldman Sachs have updated clients with a suite of new global forecasts that shows the UK economy could grow by 7.1% in 2021, which is currently the most generous forecast of any major institutional forecaster.

"This reflects the enormous improvement in the public health situation on the back of surging vaccinations - daily fatalities have fallen by a whopping 97% from their January peak - and the substantial room for rebound given the outsized 7.8% drop in real GDP through 2020," says Jan Hatzius, an economist at Goldman Sachs.

The consensus UK GDP forecast for 2021 is 4.7%, according to a regular Bloomberg survey.

Goldman Sachs acknowledge their views on the global economic rebound remain very optimistic when compared to peers as they think market participants underestimate the likely pace of improvement in both the public health situation and economic activity in the remainder of 2021. 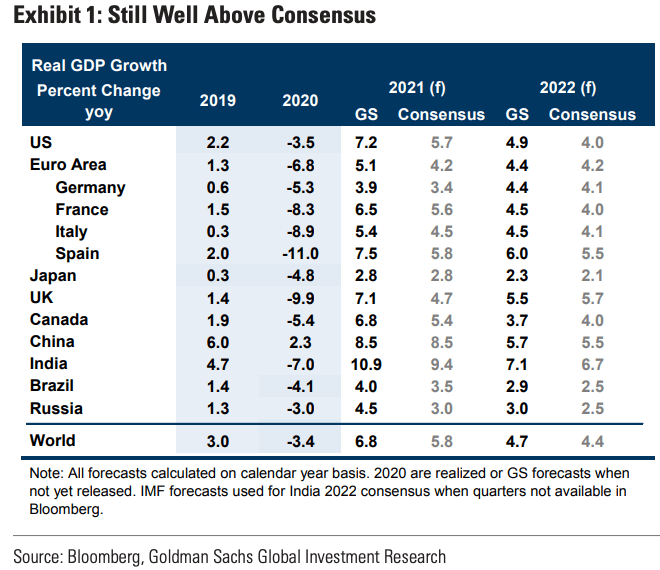 The findings come as the IMF upgrades its forecasts for the UK economy and says in its latest suite of economic forecasts that the UK is now set to outperform both the U.S. and Eurozone economies by 2022.

The U.S. is projected to return to pre-pandemic (end 2019) activity levels in the first half of 2021 and Japan in the second half.

The IMF said UK growth would be 0.8 percentage points greater this year as a path out of the economic crisis becomes "increasingly visible".

"As the vulnerable population gets vaccinated, contact-intensive activities are expected to resume and drive a significant pickup in growth thanks to pent-up demand funded by accumulated savings in 2020," said the IMF.

The UK has no vaccinated more than half of its adult population while covid-19 cases continue a downward trend, leading to hopes that the economy will be unlocked on a sustainable basis over coming days and weeks.

Expectations for an end to a cycle of lockdowns and constrained freedoms has in turn allowed businesses and consumers to start investing and spending once more, which feeds into increased economic activity.

"Fast data continues to show visible, albeit very gradual, improvement in the economy, in line with the government's reopening plans," says Fabrice Montagné, an economist at Barclays.

Montagné says "the economy continues to heal, one step at a time" and he cites data showing spending levels continued to drift higher at the end of March, albeit slowing slightly.

The Bank of England/ONS CHAPS data also suggest some slowing in the pace of spending growth through March.

Meanwhile, Banks appear to be increasingly willing to lend as rejection rates fall further, which Montagné says would be consistent with increased household interest for car and housing spending.

"The easing of restrictions from 29 March, and the reopening of non-essential shops, outdoor hospitality and indoor leisure facilities, which have been confirmed for 12 April, will provide further impetus to spending levels in the coming weeks," says Montagné.

A slowdown in UK economic growth during the summer has been confirmed by the release of official GDP data for July.