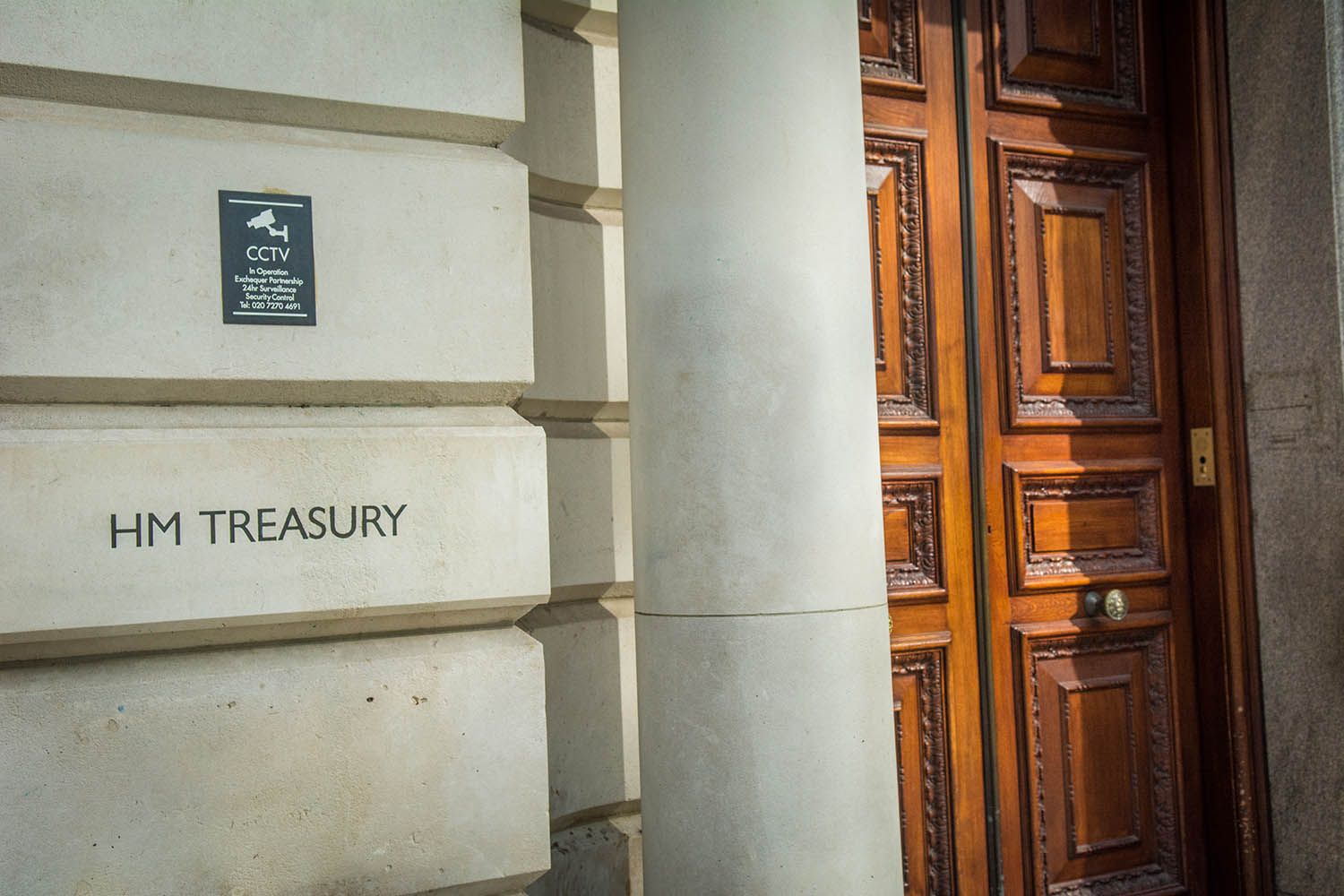 Chancellor Rishi Sunak launched 2020's comprehensive spending review Tuesday, which is expected to see the government make good on a range of past commitments but will underline the goliathan task ahead of HM Treasury if it's to return the public finances to a sustainable footing.

With the coronavirus stricken UK economy on course for an estimated -9.2% contraction for 2020 HM Treasury has been left caught between a rock and a hard place  as businesses bedevilled by lingering concerns about the virus threat and social distancing regulations necessitate continued support from government, while the cost of backstopping companies' balance sheets and jobs for millions of people tests the limits of the public purse like never before.

"Due to unprecedented uncertainty, the Chancellor did not fix a set spending envelope, but confirmed that departmental spending (both capital and resource) will grow in real terms across the CSR period and that the government will deliver on the commitments made at Budget to level up and invest in the priorities of the British people," says HM Treasury in a statement. "Given the impact COVID-19 has had on the economy, the Chancellor was clear there will need be tough choices in other areas of spending."

Chancellor Sunak commenced preparations for the Autumn budget as HM Treasury figures revealed the government has spent nearly two percent of GDP on emergency loans to companies since March and after Office for National Statistics (ONS) data showed borrowing remaining near record levels in June.

"The smaller rise in public sector borrowing in June compared to May suggests that government support is starting to wind down as the economy reopens. However, government borrowing is still exceptionally high and we suspect that a slowdown in the recovery and further rise in unemployment later this year will prompt the government to announce additional fiscal spending at the next Budget," says Paul Dales, chief UK economist at Capital Economics. 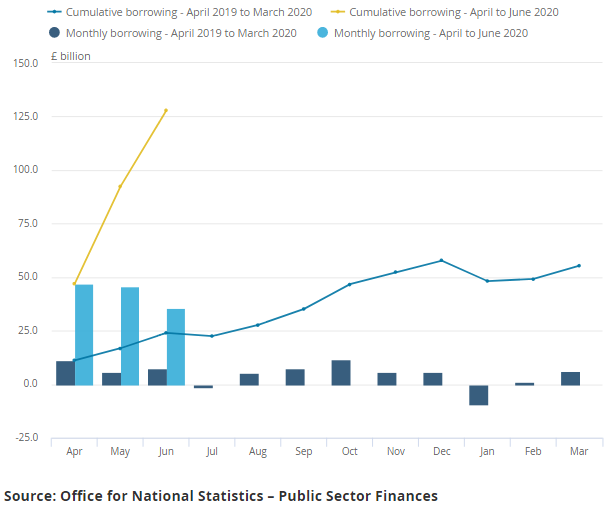 "Departments have been asked to identify opportunities to reprioritise and deliver savings. Departments will also be required to fulfil a series of conditions in their returns, including providing evidence they are delivering the government’s priorities and focussing on delivery," HM Treasury says. "To help frame the government’s approach at the Spending Review, an interim report of the Net Zero Review will be published this Autumn."

HM Treasury had spent £32.79 billion on bounceback loan financing for small and medium sized businesses by July 19, data showed on Tuesday, while business interruption loan schemes had provided a combined £15.1 billion of financing to small and large businesses.

More than 100k businesses had made use of the business interruption loan scheme while 1.12 million had taken advantage of the bounceback scheme that loans the lesser of 25% of turnover or £50k to all qualifying companies.

"Spending peaked at a record high of £99.3bn in April," says Kallum Pickering, a senior economist at Berenberg. "The data are consistent with the general picture suggested by high-frequency data, surveys and monthly activity indicators for key sectors such as retail, production and housing which show that the downturn probably bottomed-out in early-May." 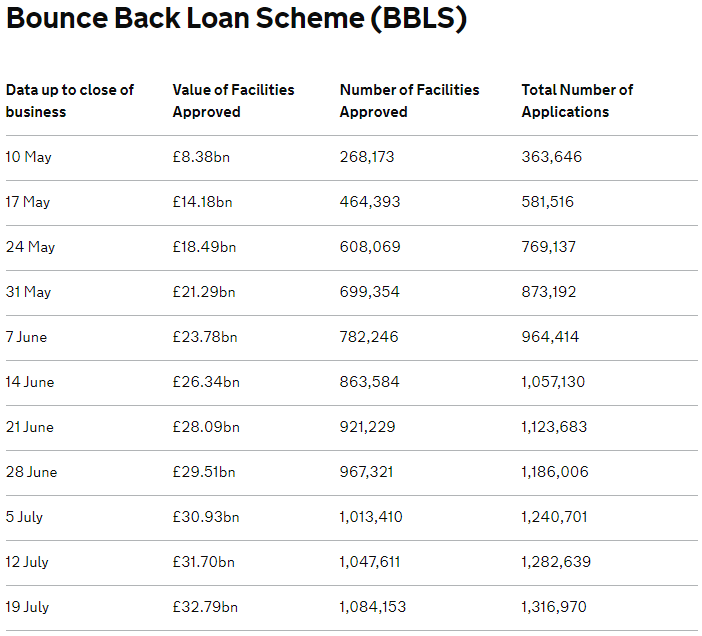 Loan scheme statistics were released after the ONS said government borrowing came in at £35.5 billion in June, down from £44.7bn the prior month but still roughly five times (or £28.3 billion more) that in June 2019. It was the third highest borrowing in any month since current records began in 1993.

Borrowing between April and June alone was estimated to have been more than double the entire amount raised during 2019 financial year.

This is after 9.4 million workers were revealed to be relying on the government's furlough scheme for at least a part of their pay last month, at a total cost of £26.5bn, a number that had risen by around £9bn during the June month.

"The public sector debt ratio has risen sharply to reach almost 100% of GDP," says Alex Tuckett, a senior economist at PWC. "Chancellor Rishi Sunak will face a delicate balancing act in trying to bring the deficit down to less dramatic levels whilst avoiding pulling the fiscal rug from under the economic recovery."

Above: Consensus forecasts for the UK economy collected by HM Treasury.

Chancellor Sunak is set to begin reducing the proportion of salaries that it pays each month on August 01, when companies will need to resume paying employment taxes and a larger share of staff costs until October at which point the scheme could be pulled.

The UK economy did not rebound to the extent economists though it would in May, when GDP rose just 1.8% while consensus was looking for a 5.5% rally off the lows set in April when the economy contracted by -20.3%.

"The Chancellor finds himself between a rock and a hard place, needing to both deliver on the government’s levelling up agenda, while also balancing the books without a return to George Osborne’s austerity measures," says Rachael Griffin, a financial planning and tax expert at Quilter. “The Public Accounts Committee and Treasury Select Committee reviews of tax reliefs and post-Covid taxation will undoubtedly contribute to speculation that tax reform may be on the cards."

This is expected to lift the unemployment rate to 8.1% and lead to £293.1bn of public borrowing for the year overall, an eye watering amount that's equal to nearly 15% of GDP and could necessitate either higher taxes or a return to the austerity of the David Cameron and George Osborne years.

Neither will be good for the economy in the short-term as austerity represents a net-loss in GDP terms while higher taxes will eat into the consumption capacity of the individual who might otherwise spend more readily.