- US concesssion on car manufacturing is significant for the CAD.

- Improving outlook for oil prices is also supportive of the CAD.

- But NAFTA roadblocks remain and the deadline for a deal is looming.

The Canadian Dollar was the best performing major currency in mid-week trade as markets responded to reports of a significant concession from the White House in the North American Free Trade Agreement negotiations.

White House negotiators have dropped a demand that all cars exported to the US from Canada and Mexico contain at least 50% American parts, according to The Globe and Mail. This had previously been seen as a major stumbling block to a succesful renegotiation of the NAFTA agreement.

“The Canadian Dollar has been the worst-performing major currency so far this year; if there starts to be some optimism about NAFTA talks, there could be a serious rebound,” says Marshall Gittler, chief strategist at ACLS Global. 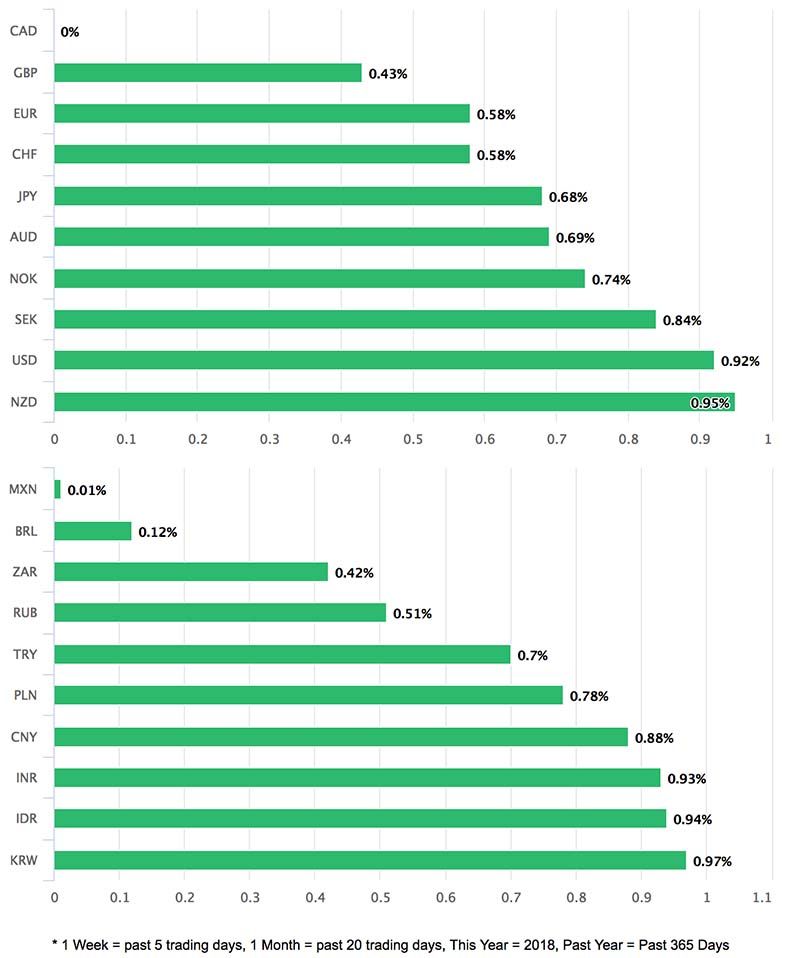 USD/CAD fell close to 100 points during the overnight and morning session in London Wednesday, taking it down to a week low at 1.3006. Meanwhile, the Pound-to-Canadian-Dollar rate slipped -0.08% to 1.8297 Wednesday despite broad gains for Sterling against the rest of the G10 basket.

The concession appears to have been taken by the market as meaning there is some prospect negotiators will be able to seal a deal during the eighth round of talks that is due to begin in April. Although this is not guaranteed as there is still a series of other key issues that are yet to be resolved. Some analysts say the Canadian Dollar could fall by 20% if the US withdraws from NAFTA.

President Donald Trump, who once described NAFTA as "the worst deal in history" and pledged to withdraw from it if more palatable terms cannot be agreed, is pushing for changes around government procurement, Canadian government subsidies to key industries and dispute resolution. He also wants a sunset clause written into the new deal, which will see the NAFTA agreement subjected to review every five years.

The NAFTA fillip comes amid a continued surge in global oil prices, itself the result of murmurings among OPEC members in Vienna about how they can further curb a multi-year supply glut, which has also boosted the Canadian currency in recent days.

“An OPEC‑led committee said that oil markets will balance by the end of September, which is sooner than previously forecast. The re‑balancing in oil markets largely reflects the OPEC‑led deal to sideline ~1.8% of global oil supply,” says Elias Haddad, a senior currency strategist at Commonwealth Bank of Australia. “In fact, more supply than that is being suspended, with compliance reportedly 38% more than planned in February.”

OPEC and a handful of other nations have made concerted efforts to reduce their oil output since January 2017, in order to prop up oil prices, which has seen stockpiles of excess oil fall from 293 million barrels to around 44 million barrels in little more than a year according to a Bloomberg report.

Oil is among Canada’s largest exports to the United States, alongside automotive goods, with each accounting for more than 20% of the crossborder pie. Although oil is priced in US Dollars, higher selling prices have a positive effect on the Loonie by improving the Canadian trade balance and current account position.

The Loonie has fallen to a nine month low against the US Dollar so far in 2018, and plumbed the depths of a two year trough against Sterling, due largely to concerns about NAFTA.

In light of the Mexican Presidential election in July and US midterms that fall in November, the April round of talks will be the last chance negotiators have to secure a new deal this side of the New Year.

Failure to agree one before then would leave a cloud of uncertainty hanging over the Canadian Dollar throughout the rest of 2018 and further muddy the Canadian interest rate outlook.

The Bank of Canada has previously flagged risks posed to the Canadian economy this year by trade uncertainty and already, markets have become less optimistic in their expectations for interest rates since the BoC last hiked the cash rate, to 1.25%, in January.

Interest rate derivatives market pricing on January 17, the day when the BoC last raised rates, implied an October 2018 cash rate of 1.78%. However, this implied rate had fallen to just 1.64% by March 21.

"Trade policy developments are an important and growing source of uncertainty for the global and Canadian outlooks," the BoC said in its Mach statement, referring to uncertainty over the future of NAFTA and a recent increase in protectionist measures from the White House.

Analysts have made clear that their forecasts for a higher Canadian Dollar this year are contingent on a resolution to the NAFTA impasse.