The Canadian dollar is forecast to suffer further declines into and through 2016 on the back of an extension of oil prices weakness.

New signs of global economic weakness have halted recent CAD strength ensuring the currency has descended from ten-week highs against its U.S. and British counterparts.

Nevertheless, the Canadian dollar has advanced againt the British pound for roughly ten out of the last 13 trading days confirming it holds the advantage in the near-term.

The driver of the move has undoubtedly been the CAD part of the equation; the currency has taken full advantage of a rare recovery rally in global commodity prices, in particular the improvement in oil prices.

The moves confirm that the Canadian dollar's outlook remains wedded to the movements in global commodity prices: 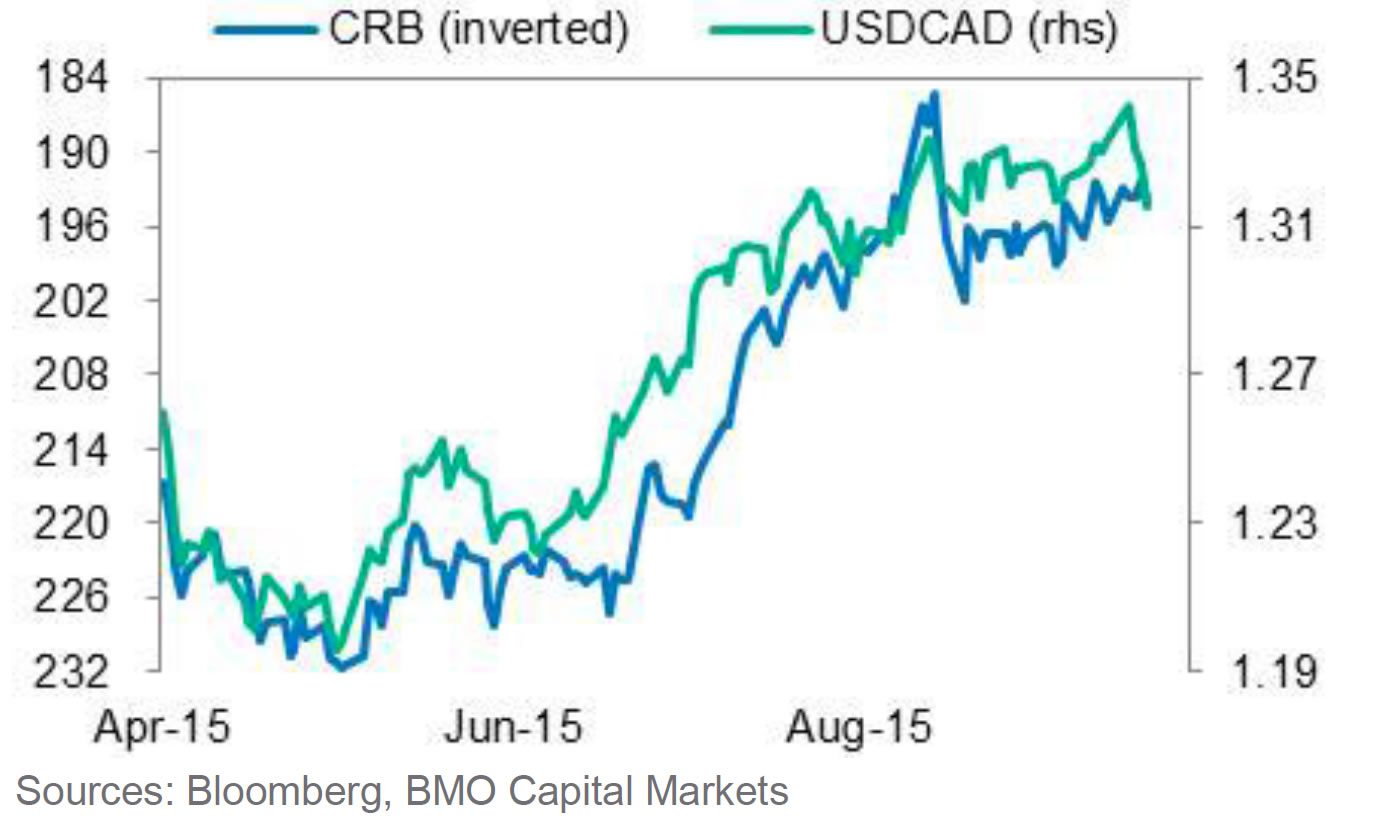 The above graph shows a clear relationship between the CAD and the CRB commodity index - an index that shows cummulative commodity prices.

For the Canadian dollar the outlook then largely rests with the future direction of commodity prices.

Oil Prices: Has the Patient Left the Doctor's Room?

Oil is a key component of the commodity basket with the overall basket contributing around 27% of the total value of Canada's GDP.

Canada is one of the only developed nations that exports energy - oil therefore matters to the country's finances and the currency.

Crude prices have moved higher over recent weeks on the expectations that supply adjustments are under way and on bullish sentiment from two industry conferences in New York and London.

"Yet doubts remain whether the patient has walked out of the doctor’s room before being fully treated. Though we perceive a sentiment shift, the physical indicators are not yet convincing, and a repeat of Q2 where a swift price rally slowed the balancing process risks happening again," warns Michael Cohen at Barclays in New York.

Barclays think that prices are likely to remain capped to the upside for the remainder of this quarter in line with our forecast due to weakening product demand, burgeoning crude and product stocks, and limited supply adjustments.

However it is worth noting that technical indicators suggest oil prices could move higher in the near-term, thus upside risks to the Canadian dollar are also to be found.

"The break above the 48.07 resistance level in WTI crude oil has made us more constructive for prices in the short term. We are looking for a move above the 50.04 range highs (Nov15 contract) to confirm upside traction and complete a larger corrective rally towards our target near $55," says Lynnden Branigan at Barclays in London.

The Canadian dollar is forecast to move lower over coming months. Barclays see the USD/CAD rising to 1.35 by the end of 2015 on the back of this CAD weakness.

Caution on the CAD will continue to grow ahead of Canada’s national election on Oct. 19.

We have reported here that strategists at BMO Capital believe currency markets have yet to full price in the risks posed by the elections.

“We don’t think the market has fully digested the election; we can’t recall a quieter one in terms of FX market attention. Given the uncertainty (and potential disappointment) the election brings, the FX Strategy team has a 1M target of 1.34,” say BMO in a currency brief to clients.