"When the USD uptrend reaches its conclusion, we expect CAD to be among a select handful of currencies that turns sharply, but we are not ready to call the end of the USD uptrend yet," BMO Capital Markets.

Canada's Dollar ceded its position as the second best performer of the year to the Swiss Franc on Friday when falling close to 73 cents against the U.S. Dollar, although it still retained large gains over other counterparts, some of which reached new multi-decade lows against the U.S. unit.

Leading the loserboard was Sterling, which was closing in on its 2008 financial crisis lows against the Loonie following a break below the 1.50 handle, but with the Canadian Dollar tipped for a sharp recovery next year the risk is that GBP/CAD has further to fall in the months and quarters ahead.

"The USD uptrend remains the most powerful gravitational force in the FX universe. Bloomberg's USD index is up 16% over the past 15 months, with the Fed's various indices showing similar gains," says Greg Anderson, global head of FX strategy at BMO Capital Markets. 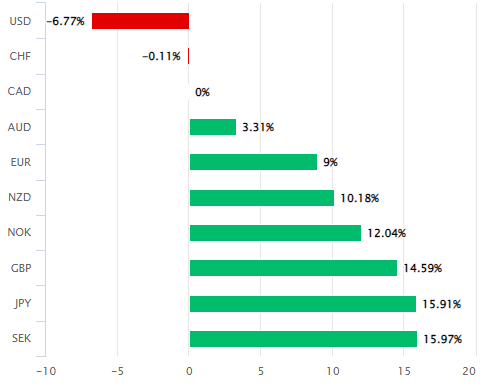 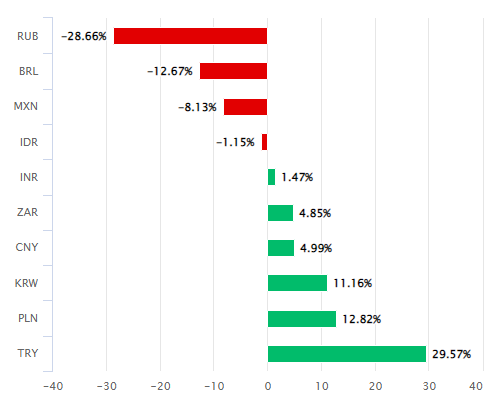 "When the USD uptrend reaches its conclusion, we expect CAD to be among a select handful of currencies that turns sharply, but we are not ready to call the end of the USD uptrend yet. At a minimum, we think that will require the Fed signaling that it is nearing the end of its tightening phase," Anderson wrote in a September forecast review.

Canada's Dollar offers one of the highest interest rates in the major currency universe owing to a Bank of Canada (BoC) monetary policy that has seen interest rates rising largely in line with those of the Federal Reserve (Fed), which lifted the top end of the Fed Funds rate to 3.25% this week.

The Fed also warned using its quarterly economic forecasts that significant further increases are still likely, with the Fed Funds rate projected to rise above 4.5% at some time next year, although whether that marks the peak likely depends as much on U.S. inflation trends as it would on anything else.

"The BoC has also been more aggressive with rate hikes and reached 3.25% earlier this month. Our economics team expects another 50bps worth of rate hikes (likely in 1 dose in October) that would bring the BoC's base rate to 3.75%. Our house call for the Fed is for it to hike another 150bps this year, which would put the Fed's terminal range at 3.75% to 4.00%," Anderson said. 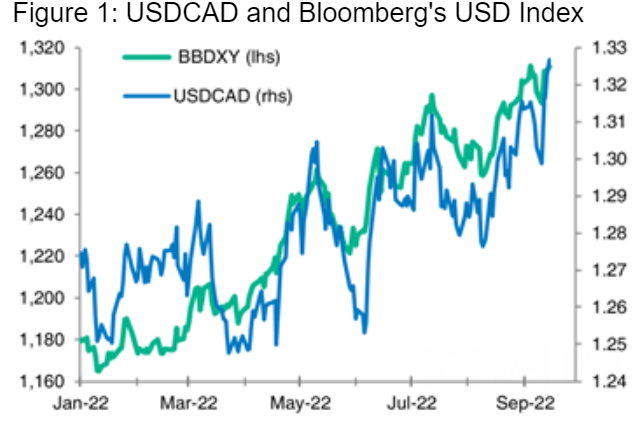 BMO's September forecasts suggest the Loonie may already have reached its bottom against the U.S. Dollar this month as the USD/CAD rate was projected to trade around the 1.33 handle over three and six-month horizons.

However, they also imply further losses ahead for GBP/CAD, with the Sterling exchange rate seen falling to 1.48 in one month before eventually reaching levels as low as 1.46 nine months out from September.

"Canada's net international investment position has receded a bit due to this year's collapse in global equity prices, but it still shows Canada as a net creditor with net assets worth about 31% of GDP (as of end Q2)," Anderson wrote.

"Canada's fiscal policy has not been as tight as some would have liked, but the Bloomberg median forecast for 2022 is a deficit worth about 2.3% of GDP in 2022, which would be a little more than half of the US's. Canada's budget is also in much better shape than the UK and most of the Eurozone," he added. 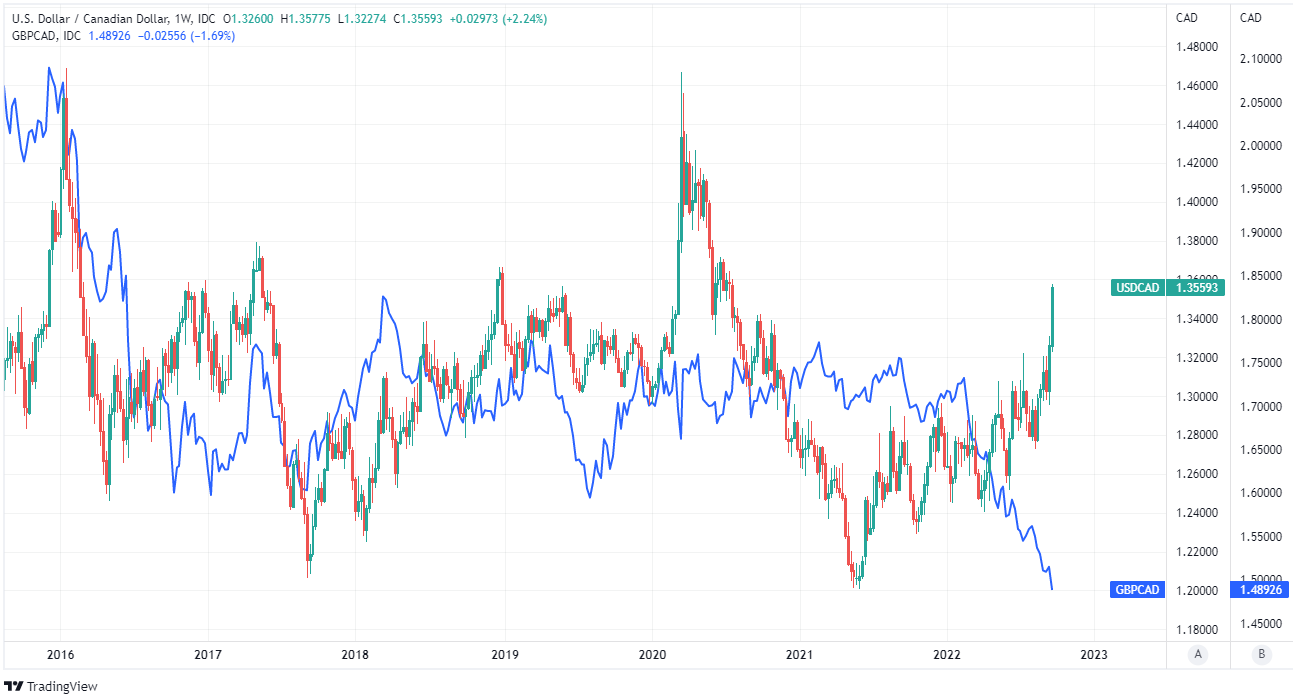 Underwriting the forecasts are strong economic and financial fundamentals, which are supported by a significant oil trade with the U.S. that has been boosted in recent years by what were, at times, very large price increases.

West Texas Intermediate crude prices previously rose to more than $130 per barrel this year while Western Canada Select reached levels above $100 after having traded as low as $3.50 per barrel during the April month of 2020.

"Oil prices have not been correlated with USDCAD over the past year, for the most part. We expect that to generally continue, but we'd throw out a couple of caveats. First, downside volatility in oil prices seems to transmit more immediately into USDCAD than upside volatility," Anderson says.

"The second caveat is that oil-CAD correlations tend to accelerate when oil breaks out of a long-standing range. With that in mind, if WTI-grade oil were to break below $80/bbl, we think there would be noticeable upward pressure on USDCAD. That is not our base case expectation, but we acknowledge it as a not-trivial risk factor," he adds. 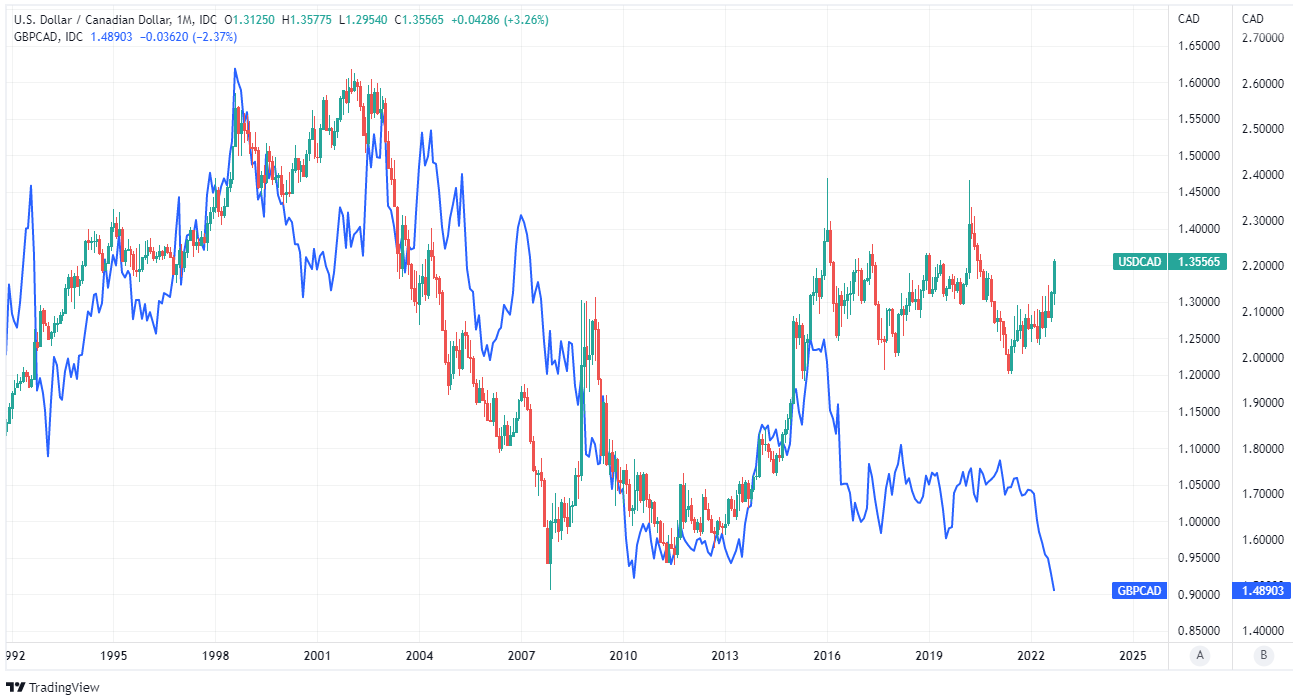