The Pound to Canadian Dollar exchange rate fell to its lowest since June 2010 last week but would risk further losses that could pull it closer toward the 1.50 handle in the days ahead if North American currencies continue to outperform or if Sterling remains a relative laggard.

Sterling traded down the round number of 1.52 against the Canadian Dollar during the opening session of the holiday-shortened week as risk assets remained out of favour while the U.S. Dollar and other North American currencies built further on last week’s gains.

This was a new 12-year low that lifted the GBP/CAD's 2022 loss to more than 10% and left it at risk of an extended downtrend that could see 1.50 or below tested in the days and weeks ahead, according to some strategists.

“GBPCAD retains a weak undertone. The GBP failed to hold support defined by the Jul low at 1.5350 and that point capped feeble GBP rebound attempts last week, leaving the cross to trade at its lowest since 2010. Underlying trend dynamics are bearish for the GBP across the short, medium and long term DMI oscillators,” says Shaun Osborne, chief FX strategist at Scotiabank. 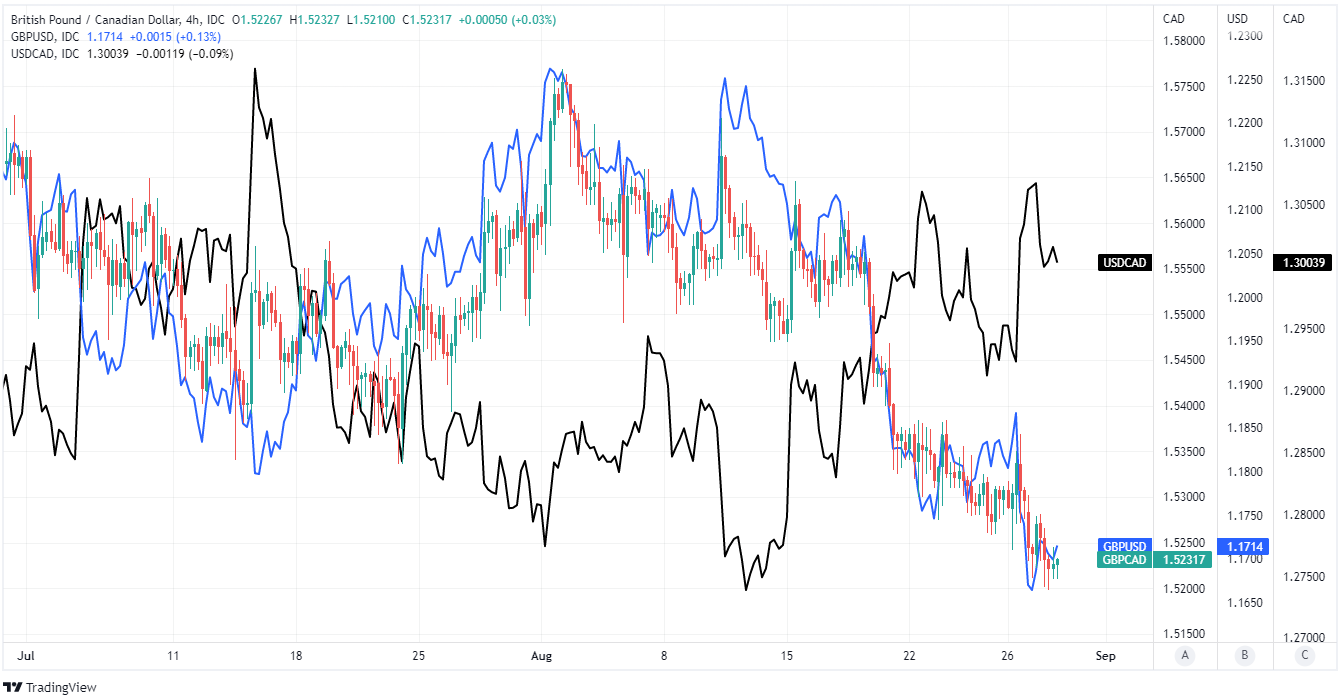 Above: Pound to Canadian Dollar rate shown at 4-hour intervals alongside GBP/USD and USD/CAD.

Pound to Canadian Dollar losses have been mimicking the decline unfolding in GBP/USD and an ongoing underperformance by Sterling but have also been made deeper by the continuing outperformance of the Loonie.

The Loonie has benefited this year from an aggressively hawkish shift in the Bank of Canada (BoC) interest rate stance and what was once widely perceived as an outperforming U.S. economy, which has led the Federal Reserve (Fed) into a similarly aggressive interest rate policy.

“USD exceptionalism has supported the US-linked CAD on the crosses but a maturing of that theme may be a more critical FX driver than near term BoC,” cautions Brian Daingerfield, head of G10 FX strategy U.S. at Natwest Markets.

Canada’s Dollar held up better than many other currencies including Sterling after Fed Chairman Jerome Powell spooked financial markets last Friday by warning that interest rates are likely to rise to a “restrictive level” and remain there “for some time” even in the event of a U.S. economic downturn. 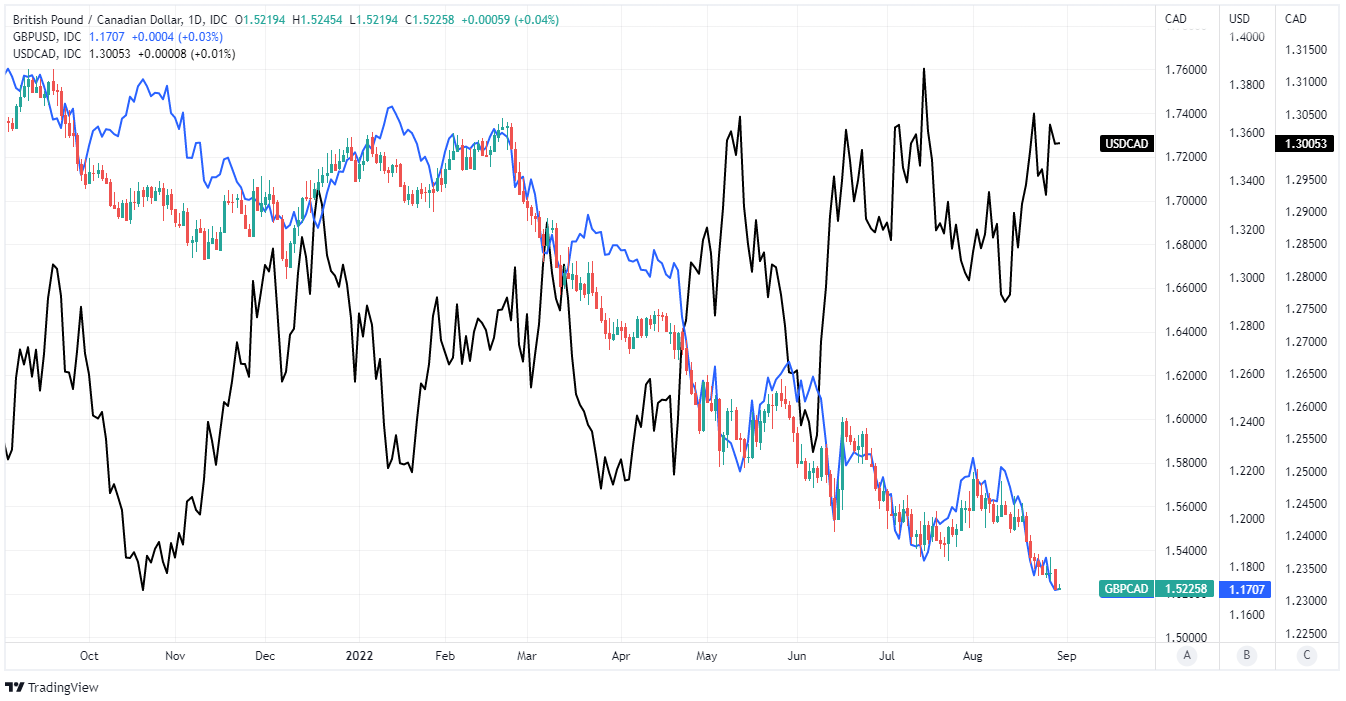 Above: Pound to Canadian Dollar rate shown at daily intervals alongside GBP/USD and USD/CAD.

With little by way of important economic figures expected from either the UK or Canada this week, much about the immediate outlook for GBP/CAD is likely to be determined by whether the U.S. Dollar remains on the front foot as this would potentially be a headwind for Sterling.

However, the Canadian Dollar may also be responsive to Wednesday’s release of GDP figures for the month of June and especially if the data suggests that the economy may be feeling the burden of the interest rate rises and other policy steps taken by the BoC in recent months.

The latter could have a stabilising influence in the latter half of the week but would be unlikely to dislodge or disrupt the entrenched downtrend.

“Real GDP should be essentially in line with Bank of Canada expectations for Q2, but we’d note that monthly GDP for June, and some of the earliest indicators already out for July, show a notable deceleration,” says Avery Shenfeld, chief economist at CIBC Capital Markets.

“Still, barring a big miss on Q2 GDP, the Bank of Canada still seems likely to opt for a 75 basis point hike in September given the recent momentum in core inflation readings,” Shenfeld wrote in a Friday look at the week ahead. 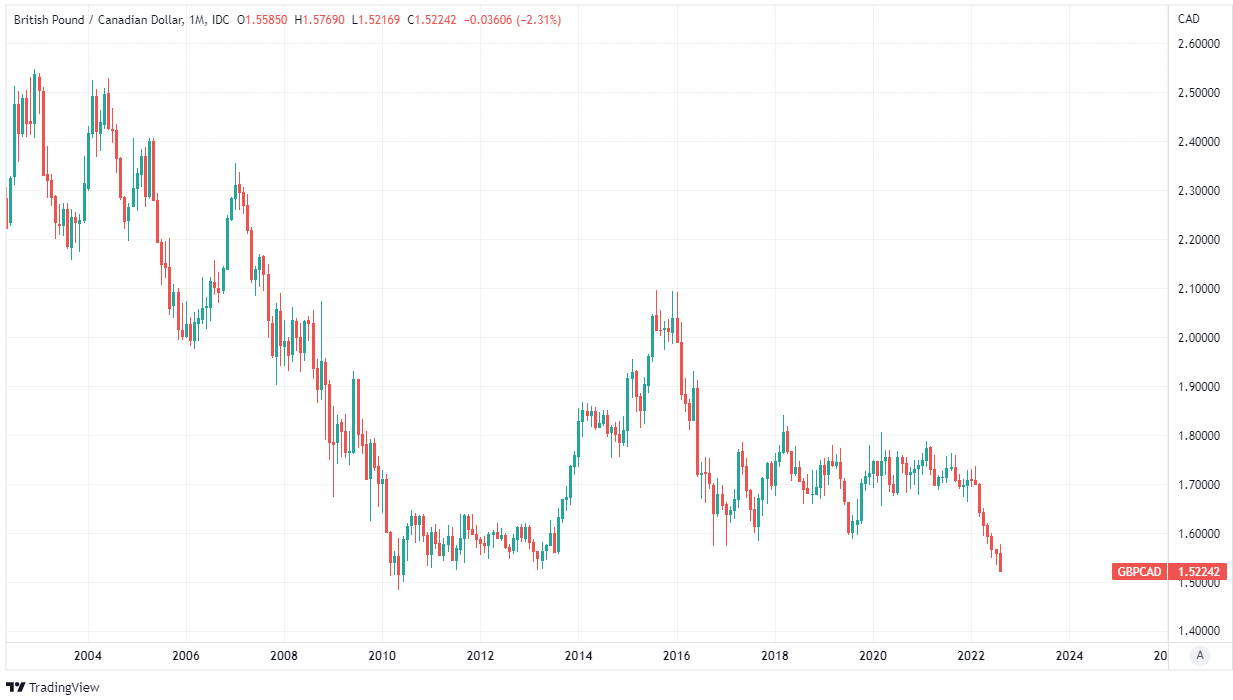 Above: Pound to Canadian Dollar rate shown at monthly intervals.