The Pound to Canadian Dollar exchange rate came under pressure close to two-year lows early in the new week but is at risk of further losses that could see it testing or even trading a short distance below the 1.65 handle over the coming days.

Canada’s Dollar notched up widespread gains over other major currencies with few exceptions to open the new week, which pulled the influential USD/CAD rate beneath 1.26 for the first time since January and prompted GBP/CAD to give up the 1.66 handle.

GBP/CAD extended a month-long decline when it slipped below 1.66 and headed for March 2020 lows around 1.6550 on Tuesday, although it would risk slipping further if Sterling remains on its back foot this week while the Loonie pushes USD/CAD lower

“The UK's economic momentum continues to outpace expectations, and inflation continues to rise. BoE members clarifying their willingness to tighten will be needed for rates to reprice and GBP to recover,” says Marek Raczko, an FX strategist at Barclays.

"We see room for the sharp reduction in market BoE tightening expectations to be reversed and for GBP to appreciate as a result. However, in the short term, the perception of a less aggressive tightening cycle in response to the Ukraine war will limit GBP's ability to rally," Raczko also said on Monday. 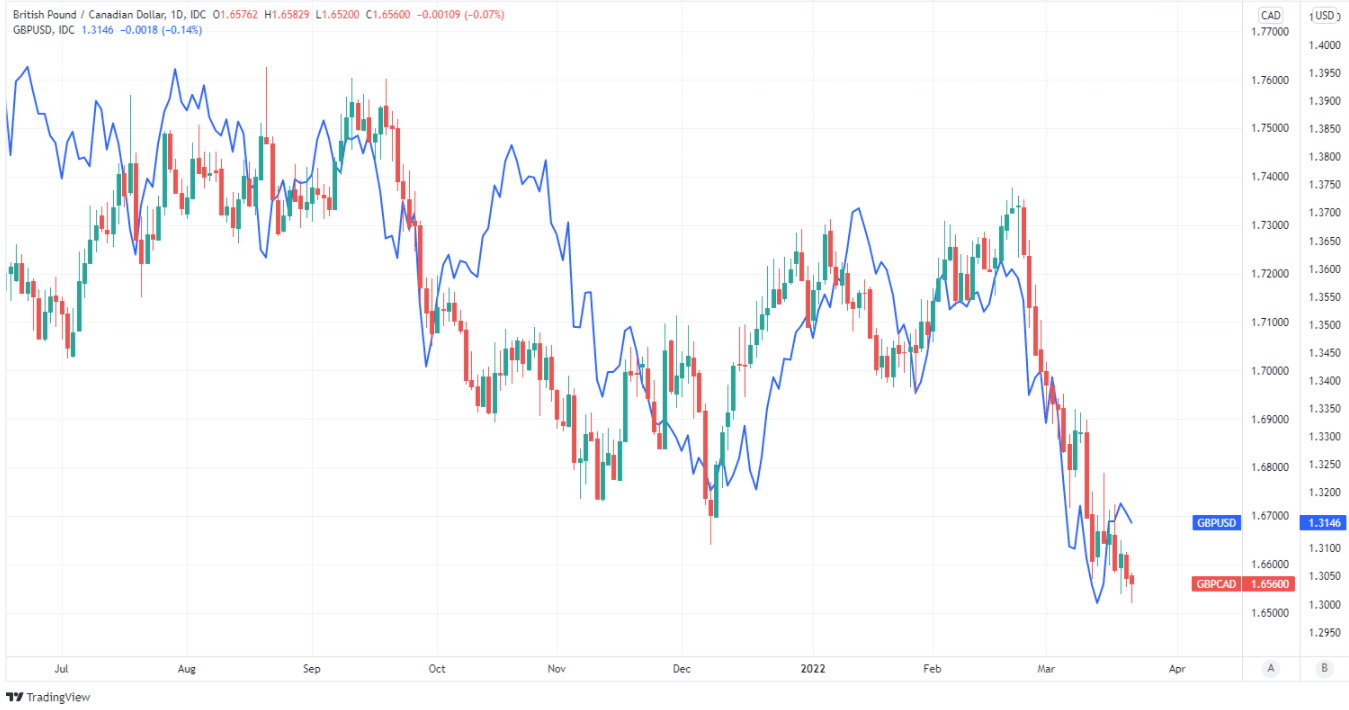 Above: GBP/CAD shown at daily intervals alongside GBP/USD.

GBP/CAD fell close to -5% in the month to Tuesday and was weighted down further last week when the Bank of England (BoE) indicated that economic damage done by recent runaway increases in oil and gas prices could potentially serve as a substitute for further increases in Bank Rate.

The BoE has lifted its benchmark interest rate three times since December, returning it to the 0.75% it was at prior to the coronavirus crisis, although financial markets have been wagering heavily that multiple further increases would lift the cash rate to 2% or more this year.

Those expectations were called into question last week, leading the Pound to soften against many major currencies, although GBP/CAD has also been burdened by a buoyant performance from a Canadian Dollar that broke higher in the direction of 2022 highs early this week.

“While we are cautious on the near-term outlook and risks facing the CAD—and we note that spot is close to our fair value estimate at the moment— we do think a combination of positive underlying fundamentals, tighter Bank of Canada policy and positive seasonal trends suggest growing downside risk for USDCAD as we move into Q2,” says Shaun Osborne, chief FX strategist at Scotiabank.

“We note that Friday’s close for the USD was the lowest weekly close for spot since late Jan, suggesting that the recent, sideways range trade around the 1.2750 point may be showing signs of breaking down (bearishly for the USD). A clear move under 1.2565/75 would signal more immediate downside risk for the USD,” Osborne and colleagues said on Monday.

GBP/CAD is susceptible to the twists and turns of USD/CAD as it tends to closely reflect the relative performance of Sterling and the Canadian Dollar when each is measured against the U.S. Dollar, and a falling USD/CAD rate is almost always a headwind for GBP/CAD.

It would remain under pressure this week and could potentially even edge below the 1.65 handle if USD/CAD falls far enough beneath 1.26 over the coming days, although some strategists are doubtful this will happen.

“USD/CAD is finding some support at the 1.2585/87 mark for now which is in-line with prior lows from earlier this month as well as trend line support off of the lows from 2021. We expect this support to hold for now and re-test the 1.2800 area in the near-term,” says Bipan Rai, North American head of FX strategy at CIBC Capital Markets. 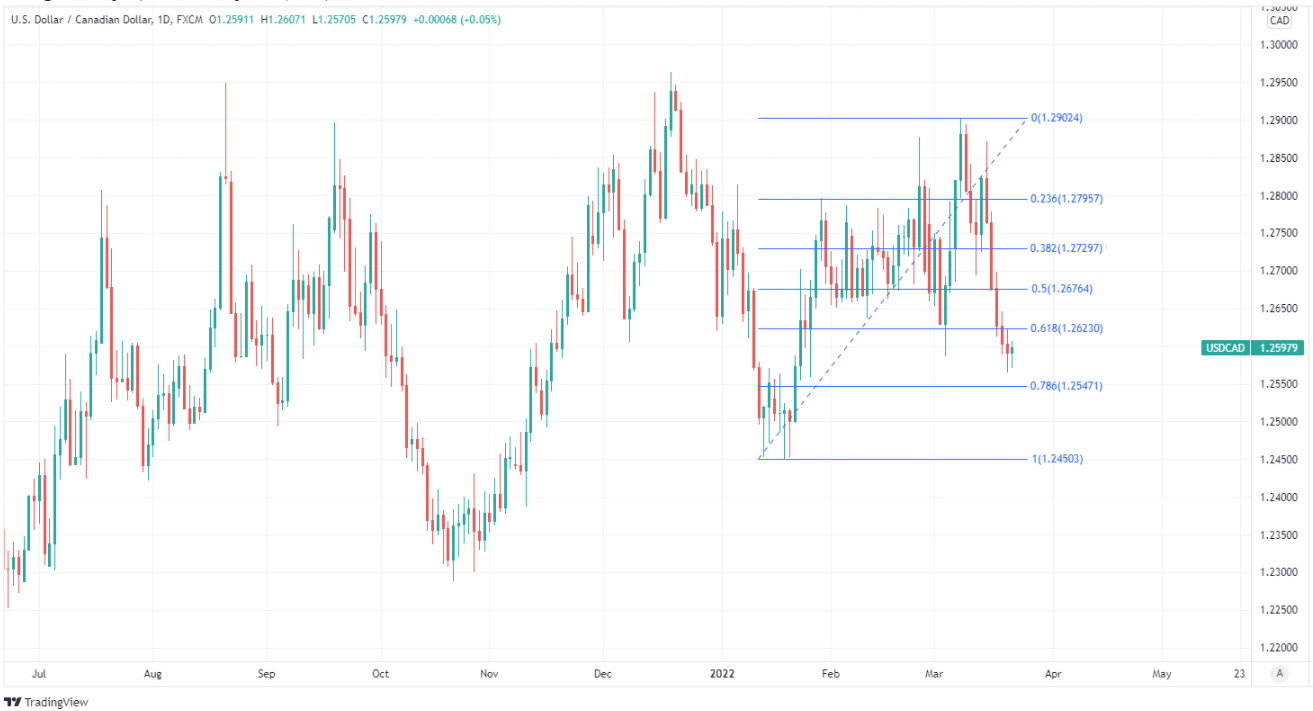 GBP/CAD would be likely to stabilise but remain suppressed close to the round number of 1.66 this week if USD/CAD averts a sustained fall beneath 1.26, although Sterling’s response to this week’s economic data emerging from the UK could also impact GBP/CAD.

“The market is still pricing in more than 100bp of tightening by November, we would view such assumptions as remaining overblown. Any evidence of consumers reining in consumption in either the flash services PMI or February retail sales releases is likely to weigh heavily on GBP,” says Jeremy Stretch, head of FX strategy and CIBC colleague of Rai’s.

The week ahead is devoid of major appointments on the economic side for the Canadian Dollar, although February’s inflation figures are out in the UK on Wednesday and are followed by PMI surveys and retail sales data on Thursday and Friday.

Consensus estimates suggest UK inflation likely rose from 5.5% to 6% last month and that it will likely rise further in the months ahead, although there’s uncertainty over how Sterling would respond to such developments in light of questions about the extent to which the BoE will respond to it.

“The BoE hiked rates by 25bp to 0.75% but struck a very cautious tone, in the face of a real-income squeeze for households,” says Barclays’ Raczko.

“Policy announcements at the Spring Statement [Wednesday] on the budget will likely focus on supporting households through the cost of living crisis, but we do not expect any meaningful fiscal easing. We see room for GBP to appreciate, but in the short term the perception of a less aggressive tightening cycle in response to the Ukraine war will limit GBP's ability to rally,” Raczko also said on Monday. 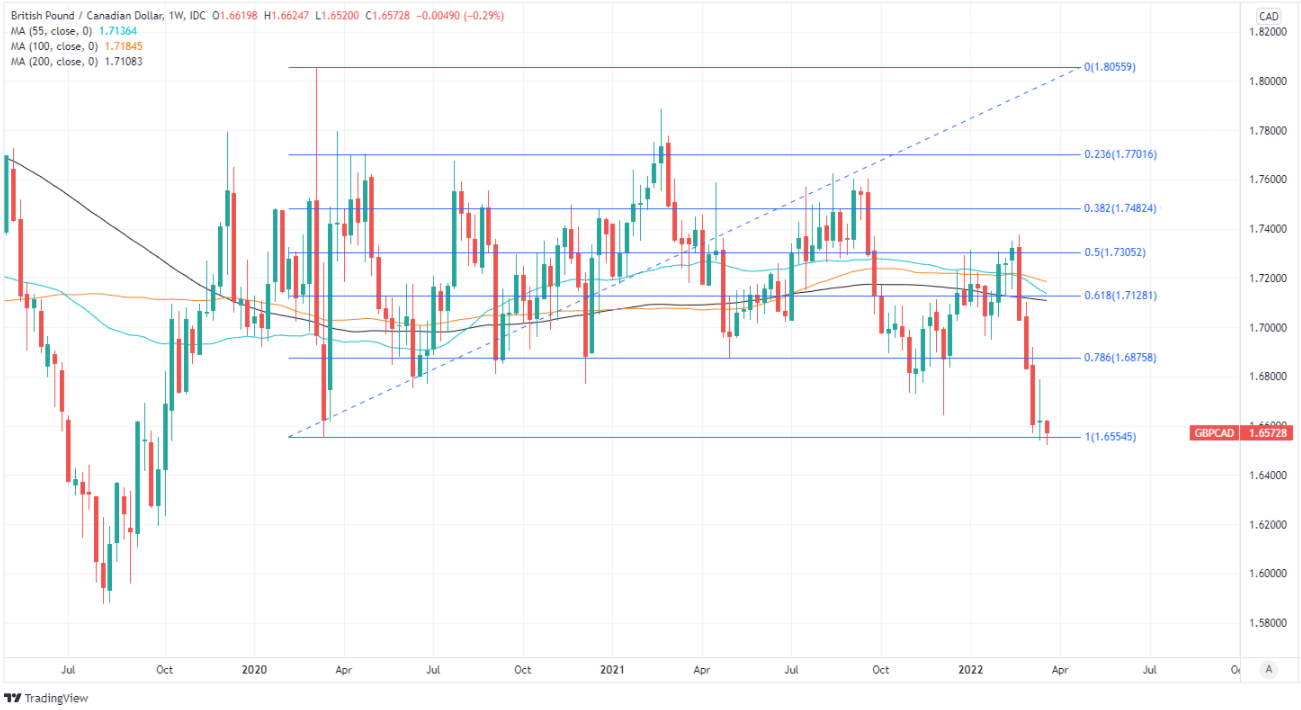 Above: GBP/CAD shown at weekly intervals with Fibonacci retracements of 2020 recovery indicating possible areas of technical support for Sterling.