The Pound-to-Canadian Dollar exchange rate has struggled to sustain momentum above 1.7350 but remains on its front foot and could be set to reclaim the top spot among G10 major currencies for 2021 this week with another attempt at recovering above the year’s breakeven level of 1.7380.

Sterling put in a strong performance against many currencies last week including the Loonie after the UK’s declining coronavirus infection count garnered much attention among analysts, investors and some traders, leading GBP/CAD to briefly retest the 1.75 handle.

The Pound-to-Canadian Dollar exchange rate has since ebbed back toward the 1.73 handle but remained comfortably above its 200-day moving-average at 1.7291 on entry into the new week, a level upon which support could build for over the coming days.

“Speculative FX traders have largely abandoned short USD positions in recent weeks and heightened equity market volatility—something of a “tradition” in August—will tend to work against the CAD and may lift USDCAD towards the upper reaches of our estimated range for next week (1.2508),” says Shaun Osborne, chief FX strategist at Scotiabank.

GBP/CAD would trade within a 1.7288-to-1.75 range this week if the main Sterling exchange rate GBP/USD tests the upper bound of an anticipated 1.3830-to-1.40 band and Scotiabank is right about he USD/CAD attempting to retest 1.25.

Meanwhile, any move above 1.7380 would see the Pound edge the Canadian Dollar out to slip back into the top spot among major currencies for 2021. 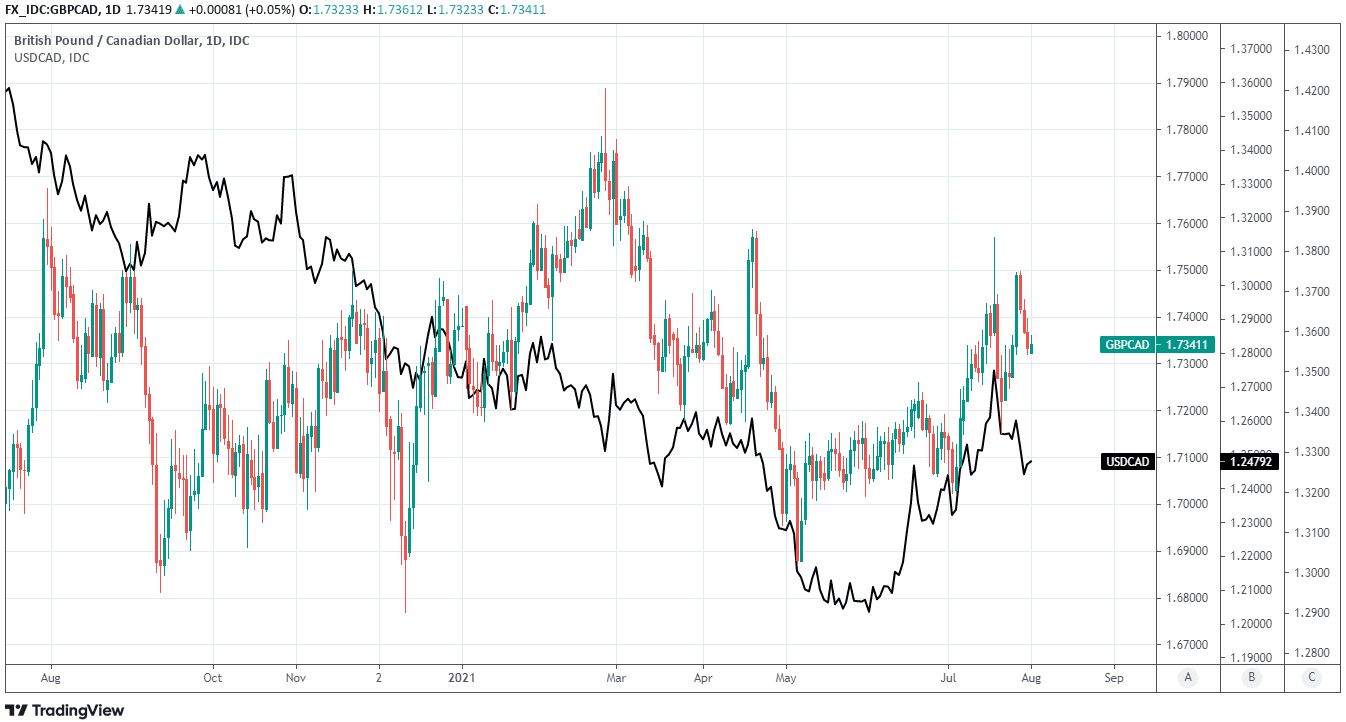 The Pound-Canadian Dollar rate always closely reflects the relative performance of USD/CAD and GBP/USD, and often tends to trade with a negative correlation to USD/CAD so would likely benefit if the latter turns higher anew this week, or struggle if the Loonie pushed USD/CAD lower.

“Yes, case upturns are visible in some highly vaccinated countries and in parts of Canada, but disproportionately among the unvaccinated, and fatalities are much rarer. Fifty days into its third wave, the UK has seen roughly the same escalation in cases as in wave two, but only a tiny fraction of the prior wave’s death toll,” says Avery Shenfeld, chief economist at CIBC Capital Markets.

There’s reason for why the Canadian currency could continue to constrain Sterling and not least because Canada has leapt to the top of the league table in terms of the number of vaccinations carried out and could benefit in coming months from a further relaxation of coronavirus-inspired curbs on activity and social contact such as those announced by the country’s third largest provincial economy, Alberta, last week. 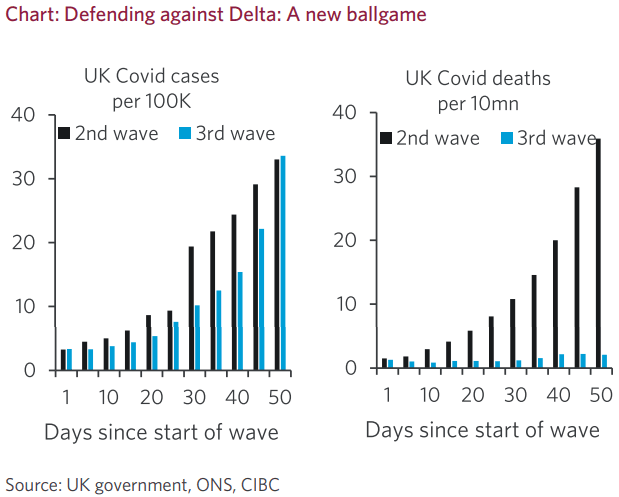 To the extent that these or other factors lead the Loonie push USD/CAD lower they could see GBP/CAD gains limited if-not render them non-existent.

But there are also reasons for why the Loonie could struggle to keep the Pound under wraps including that Canadian inflation pressures have recently begun to lose momentum and GDP data has shown the economy lagging behind Bank of Canada (BoC) expectations for the second quarter.

“We're still tracking 2021 growth near 6%, in line with the July MPR, but combination of downward revisions to April and stronger momentum into next quarter will impact the composition between Q2 and Q3,” says Robert Both, a macro strategist at TD Securities.

Market expectations of when the BoC might eventually lift its 0.25% cash rate have been even more optimistic than those applying to the Federal Reserve, which could potentially make the Loonie more sensitive over coming months to disappointing economic data.

The week ahead contains little of note in the economic calendar for Canada ahead of Friday’s July job report that consensus expects to confirm a 145.7k increase in the number of new jobs created in Canada last month, which is seen pulling the unemployment rate lower from 7.8% to 7.3%.

Along the way toward Friday’s job report Sterling will be sensitive to anticipation and the outcome of Thursday’s 12:00 Bank of England policy decision and Monetary Policy Report, notably in relation to whether the bank’s forecast for inflation in the third quarter of 2024 has the consumer price index above the 2% target.

The latter would be supportive of GBP/USD and GBP/CAD as it could signal increased scope for an interest rate rise before the earlier assumed time of mid-2023, while any projection of 2% or lower would likely leave Sterling struggling for additional momentum.

“Market participants are likely focusing on this week’s BoE policy meeting for guidance on the pound’s direction (although the consensus is for no change in policy settings, particularly as the delta variant adds a little more risk to the outlook),” says Scotiabank’s Osborne.

“The GBP’s clear rejection of key support on the weekly chart last week at 1.3670 and additional gains this week towards the 1.40 area suggest broader trends are tilting more positively for the GBP again—and potentially point to a retest of the low 1.42s,” Osborne adds. 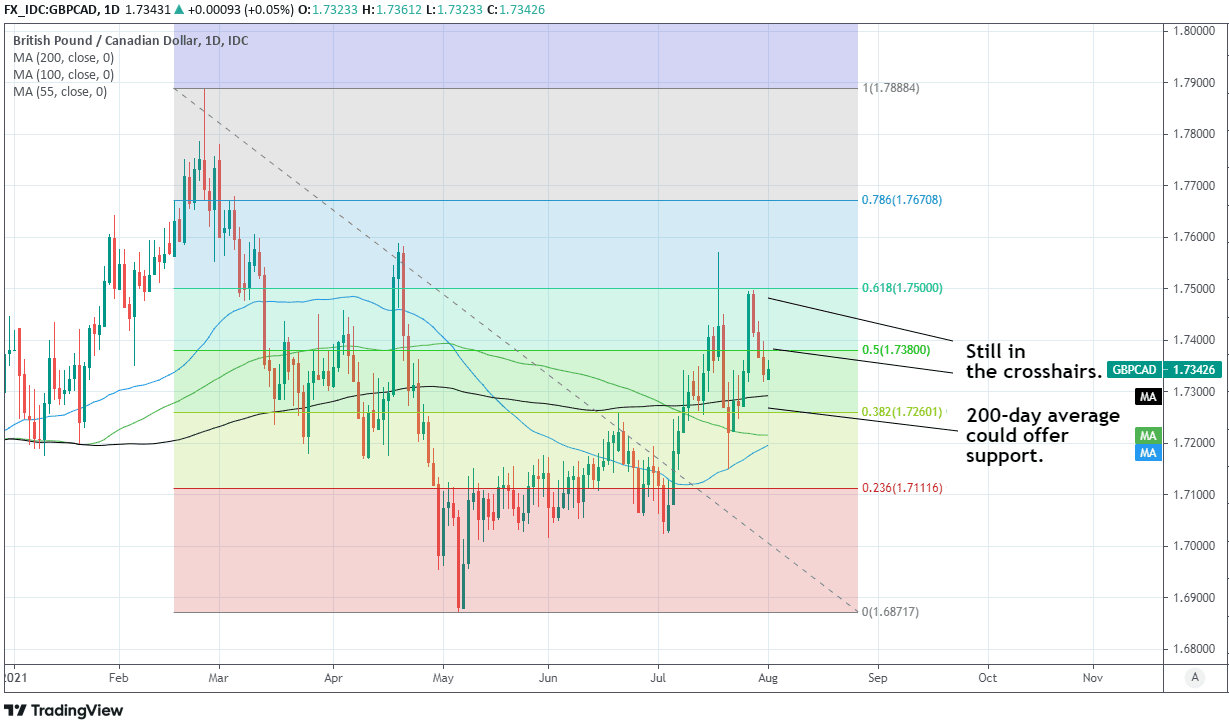