The Canadian Dollar was softer against its major counterparts after it was reported the economy lost 207.1K jobs in April, which is more severe than the -175.0K the market was expecting.

Canada had added 303K jobs in March, a figure that may have elevated expectations going into the April report.

The disappointment offered some relief for the Pound-to-Canadian Dollar exchange rate (GBP/CAD) which has come under relentless selling pressure since April 20, when a high of 1.7588 was rejected.

The pair has retaken some lost ground to quote at 1.6965 at the time of writing.

The disappointing employment figures out of Canada were mirrored by a similar disappointment south of the border, where the U.S. non-farm payrolls report was surprisingly poor. 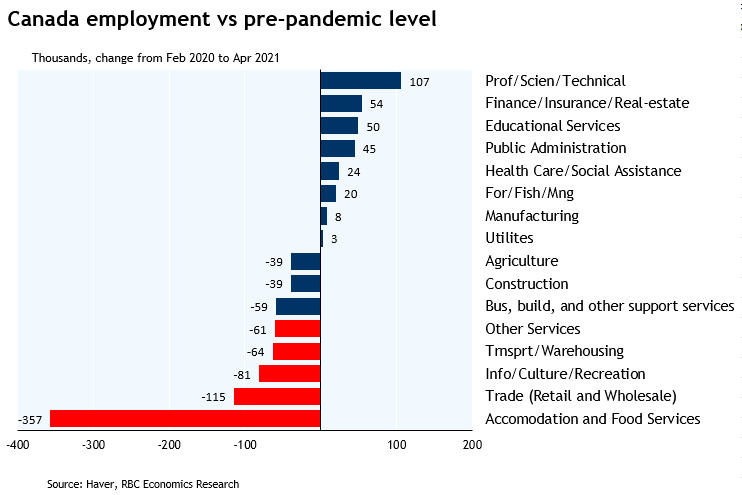 Markets were expecting a poor report as the Canadian economy was hit by a third wave of coronavirus infections in March which lead to restrictions on movement and economic activity being imposed by the government.

"Job losses were once again heavily concentrated in the 'high-contact' services sector and at the lower end of the wage scale, where government pandemic support programs provide a larger relative income offset," says Nathan Janzen, Senior Economist at RBC Economics.

RBC Capital economists note the drop in April employment to have been more broadly-based than job losses during the second virus wave over the winter.

"As in prior waves of virus spread, employment will rebound once containment measures can be eased. And that light at the end of the tunnel is getting closer with vaccination rates ramping up," says Janzen.

Indeed, those watching GBP/CAD should be aware that the trend currently favours the Canadian Dollar and the disappointing jobs data are in isolation likely not enough to shift trend.