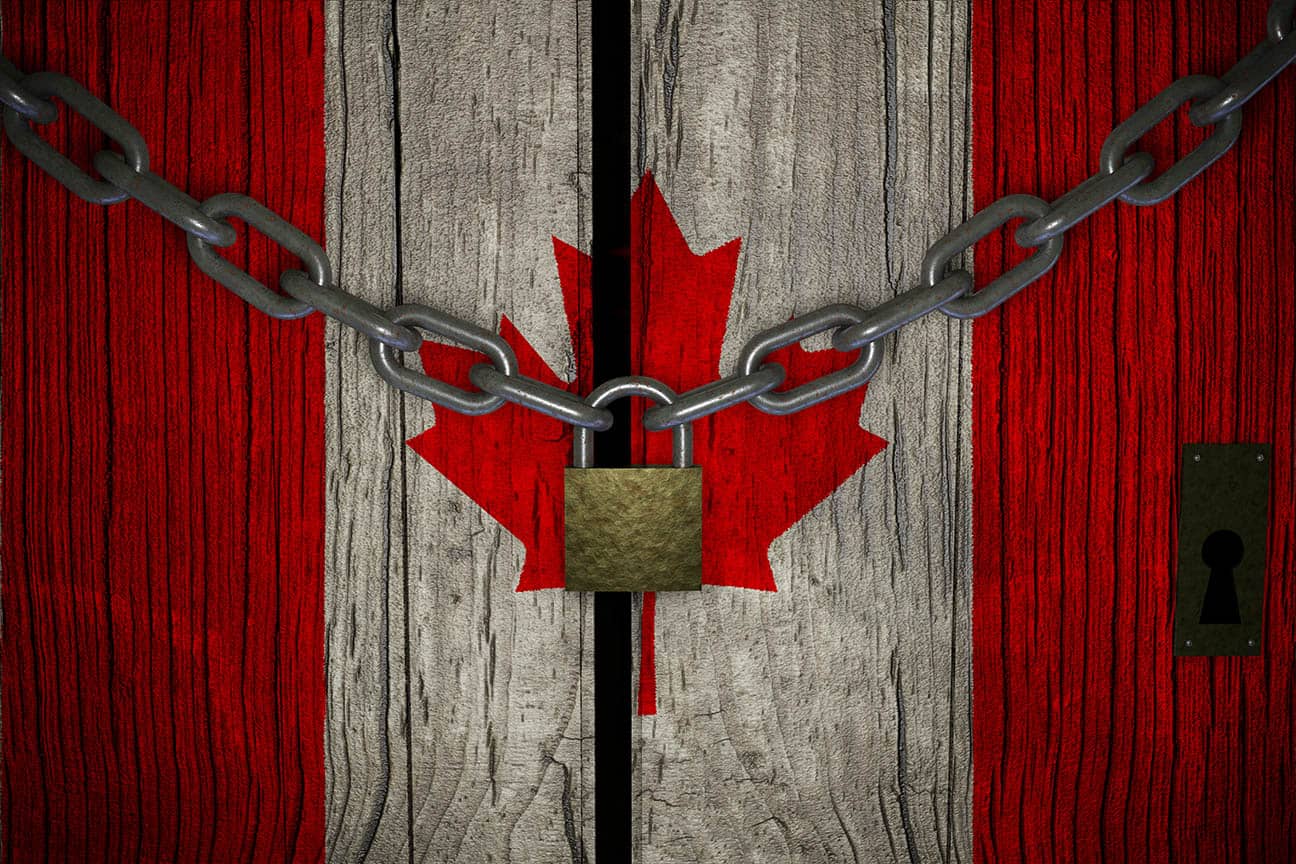 The Canadian Dollar has risen against all G10 rivals over the course of 2021 thanks to a rapid rebound in U.S. economic activity, which bodes well for the Canadian economy given its proximity to the U.S. and the strong trade ties between the two nations.

A rebound in oil prices and strong fiscal support from the government have also aided expectations for a strong economic performance in Canada over coming months.

However, the country's slow vaccine rollout relative to its southern neighbour and other advanced countries appears to be a potential headwind in a world where vaccines offer a sustained exit from the coronacrisis.

Canada's slow vaccination rollout means a new wave of infections is sweeping the country and this is said to be drawing questions on the bullish assumptions many market participants have held on CAD.

Ontario, Canada’s biggest province, entered a four-week lockdown on Wednesday given the surge in Covid-19 cases and an increase in hospitalisations. 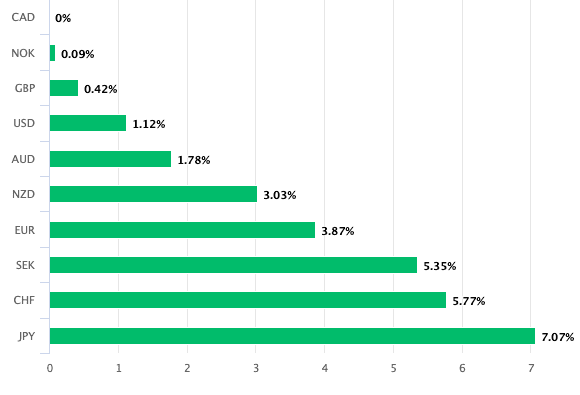 Above: The Canadian Dollar is 2021's best performing currency.

The decision to enact a stay-at-home order comes after hospital admissions in the province rose by 20% on Tuesday alone and ICU occupancy has this week already set a pandemic.

The B.1.1.7 variant of the virus is said to be driving the surge in new infections and hospitalisations.

Analysts at Credit Suisse say they now identify "tactical risks" on their bullish stance on the Canadian Dollar, stemming from the country's slow vaccine rollout and the potential for a downward adjustment in Bank of Canada (BoC) rate hike expectations.

"Markets see a high likelihood of the BoC announcing tapering of asset purchases on 21 April: with Covid vaccinations lagging the U.S. and lockdowns still in place in Ontario and Quebec, we are less certain that these expectations will realise near-term," says Shahab Jalinoos, Global Head of FX Strategy at Credit Suisse. 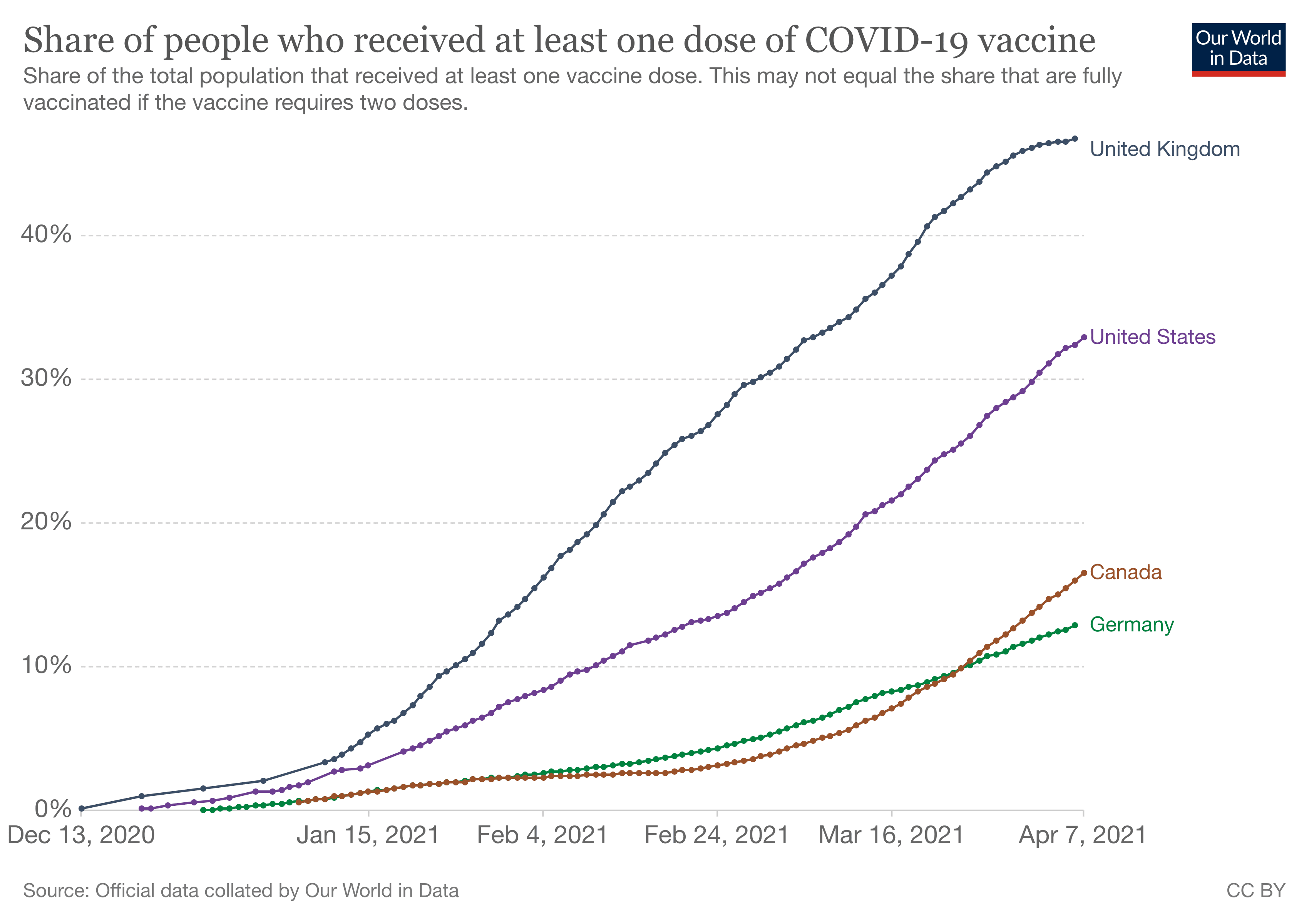 Above: Canada's vaccination programme has lagged that of other major countries.

One of the key drivers of the Canadian Dollar's strong performance in 2021 has been a rapid reprisal of BoC policy with investors judging the central bank is on course to start shrinking its balance sheet ahead of other major central banks.

The BoC in March indicated it would start removing some of the stimulus it had created during the covid crisis with a view to returning monetary policy to 'normal' settings given the economy's strong rebound and improved outlook.

A general rule-of-thumb in foreign exchange is that when a central bank shrink its balance sheet, via raising interest rates and exiting quantitative easing programmes, the currency it issues rises in value.

"The Bank of Canada’s tone has also helped CAD lately, notably the 23 March announcement that it would end the QE programs in which it bought commercial paper, provincial bonds and corporate bonds," says Sean Callow, a foreign exchange strategist at Westpac.

But, the CAD-supportive Bank of Canada could yet be prompted to perform an about-turn if the latest restrictions in Ontario pose an unexpected downside risk to economic activity.

"We see the positive Canada story as fairly priced with an April BoC taper, which gives way to asymmetric risks for data over the next few weeks," says Rahbari.

"While an April taper seems a done deal, weaker data over the next few weeks should give rise to a dovish taper narrative which may trigger an unwinding of long CAD positions," he adds.

While a slow vaccination programme has apparently failed to prevent a major rise in hospitalisations and covid-19 infections, Credit Suisse tell clients they still ultimately remain bullish on the Canadian Dollar's prospects for the greater duration of 2021.

The bank says the fundamentals underpinning the currency are geared to U.S. growth and oil prices which bodes for a strong end to 2021 for the currency.

"The fundamental picture in Canada remains unequivocally strong, as the prospect of US demand momentum adds to the already beneficial impact from oil prices and from the multi-year consolidation / retooling of the local energy transportation network," says Jalinoos.

In addition, "the strong fiscal spending effort from the Trudeau gov’t also provides a homegrown source of support for CAD. Sovereign credit concerns remain on the backburner."

Credit Suisse forecast the Canadian Dollar has the potential to appreciate further over the course of the second quarter, even though they do identify the "strategic risks" mentioned earlier in the article. 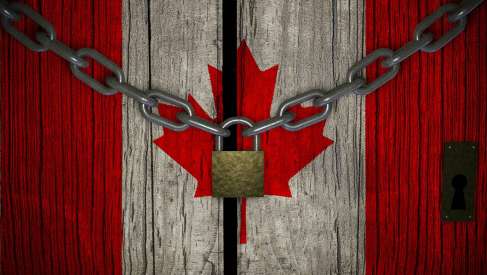