Pound Sterling was one of the worst performing major currencies on Friday having declined against all major rivals barring the oil-linked Norwegian Krone and Canadian Dollar, which both plumbed the bottom of the major currency barrel as stock and commodity markets slumped ahead of the weekend.

Risk aversion across global markets enabled GBP/CAD to probe briefly above the 1.74 level that has otherwise kept it contained for much of the time since August 2020, although Sterling may continue its attempt to break above there early this week if stock and oil prices remain in decline.

However, in the absence of commodity price pressures that inspire a more marked weakening of the Canadian Dollar, a sustained GBP/CAD break above 1.74 may not be possible until the main Sterling exchange rate GBP/USD is able to overcome nearby restistance at 1.3740 and challenge new multi-year highs.

"The current unwind is likely a part of the normal ebb and flow from a market evaluating near term risks against a more optimistic long term outlook. Namely, further stimulus and an eventual return-to-normal is offset by a temporary increase in containment measures in various parts of the world," says Sarah Ying, a quantitative strategist at CIBC Capital Markets. 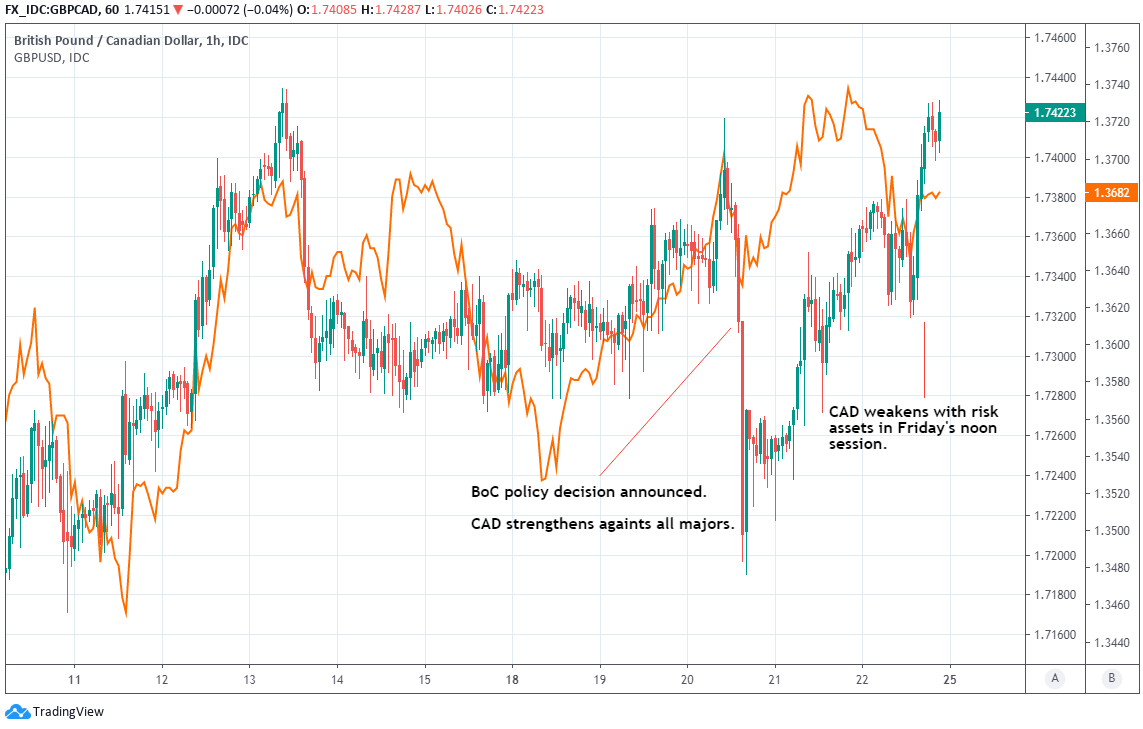 "As this mental calculus continues, we are likely to see very rangebound moves in FX. Technical levels become more important in this environment. Most notably we are eyeing the 90.00 support in DXY, 1.2625 support in USD/CAD, and 1.2230 resistance in EUR/USD," Ying writes in a research note Friday.

Without losses for  risk assets to drive the Loonie lower, and in the event that global markets stabilise this week, the USD/CAD rate could be found slipping back toward the all-important technical support level located around 1.2625. This would push the Pound-to-Canadian Dollar rate back to 1.7350 even if GBP/USD was rallying and testing last week's high of 1.3740. GBP/CAD always closely reflects relative moves in GBP/USD and USD/CAD.

"Daily price action also reflects a downward-sloping, narrowing wedge pattern which is also a common signal that a bearish move is losing momentum. Given the USD’s struggle to move away from the 1.26 area, however, we think USDCAD will need to push above daily resistance (wedge ceiling and 40-day MA) at 1.2774 to indicate a deeper rebound towards 1.29/1.30 is underway," says Shaun Osborne, chief FX strategist at Scotiabank.

Conversely and on the other hand, the Pound-to-Canadian Dollar rate could rise to 1.7440 this week but this might only be likely if further global market weakness lifts USD/CAD up to its nearest technical resistances located between 1.2775 and 1.28 while losses see GBP/USD test the 1.3625 support flagged by Scotiabank as likely to underpin the pair over the short-term.

"Trend signals are weak and neutral across short, medium and longer term time frames which suggest the GBP will continue to bounce around randomly between support around 1.72 (reinforced by the 200-day MA) and resistance at 1.75," says Juan Manuel Herrera, a strategist at Scotiabank. "We do think, however, that a push through 1.7440/45 will tip the balance towards a topside break out—price patterns suggest this may be the neckline of a bullish, inverse Head & Shoulders formation forming within the broader range trade."

Canada's Dollar was on the slide on Friday and in the process, helping to lift GBP/CAD even as most other Sterling exchange rates also declined but the Loonie had previously been an outperformer and especially in the aftermath of Wednesday's Bank of Canada (BoC) policy decision, which saw Governor Tiff Macklem and colleagues take part of the market by surprise when keeping the cash rate unchanged at 0.25%. 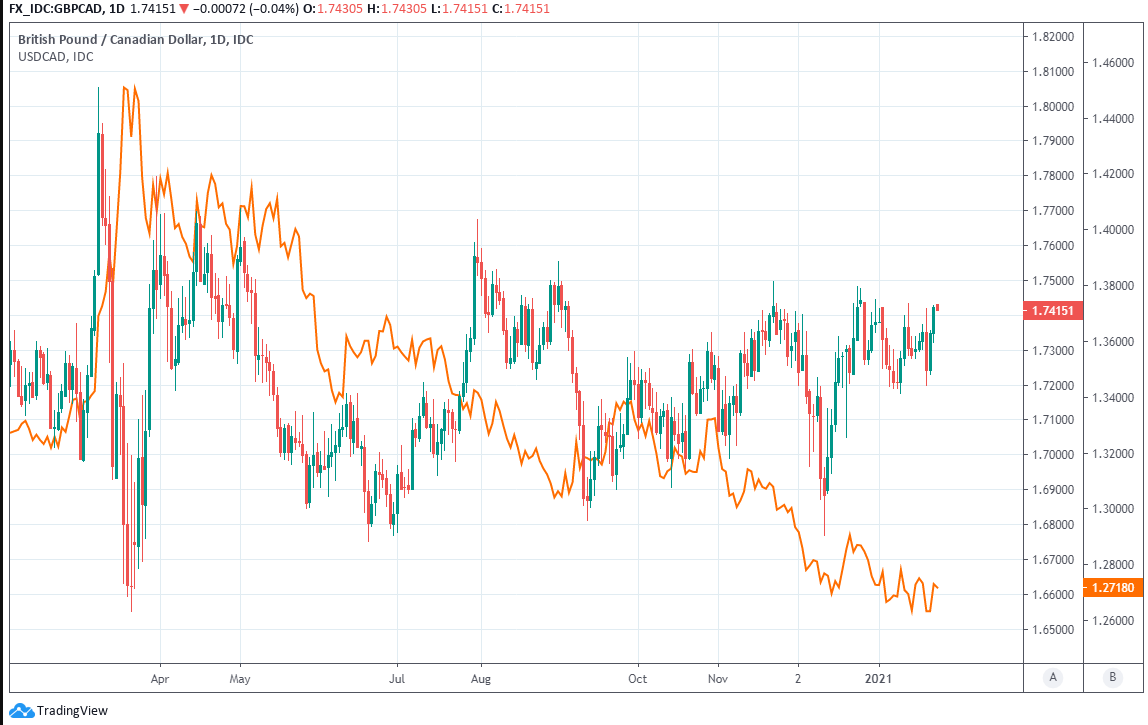 "The Canadian dollar has shown some good resilience this week despite the bad news for Canadian oil producers of the Biden administration revoking the permit on the Keystone XL pipeline," says Francesco Pesole, a strategist at ING, who sees USD/CAD trading in a 1.2620-to-1.2780 range this week. "What did help CAD this week was the Bank of Canada policy announcement. While keeping all policy measures unchanged, the economic projections showed a more upbeat tone on the medium/ long-term outlook and Governor Tiff Macklem downplayed any need for extra stimulus."

The foremost driver of the Loonie this week and other currencies including the Pound will be risk appetite, which is currently taking cues from governmental responses to new outbreaks of coronavirus, developments at the Federal Reserve and the evolving prospects of President Joe Biden being able to pass his $1.9 trillion stimulus bill through Congress. Sterling however, may also be sensitive to December's job data due out on Tuesday at 07:00.

New 'lockdown' in part of Hong Kong, threats of prolonged restrictions in the UK and other parts of Europe, early doubts about Biden's stimulus bill and delayed vaccine deliveries were all among the factors which drove the rout in risk assets on Friday, but it will be the Fed, U.S. final quarter GDP data and any new information on the likely size of any eventual stimulus bill that have most impact this week. However, Canada's November GDP data will also get a look-in this Friday at 13:30 for clues on the likely scale of damage done by the latest resctrictions on commerce and activity since that time.

"In Canada, we’ll get the last good news for a while embedded in November’s monthly GDP figures, where we’re looking for a respectable 0.4% advance ahead of what was likely a string of disappointments for December and January. Other than that, it’s a light week for economic data, leaving markets eying US economic and fiscal policy news," says Avery Shenfeld, chief economist at CIBC Capital Markets. "In the US, the Fed will stick to its dovish message, and is caught in a bit of a waiting game as it looks for clarity on how much additional fiscal stimulus Congress is willing to approve. On the data front, we expect a significant beat versus the consensus forecast for Q4 GDP, but less robust news on December consumer spending that foretells a weaker Q1." 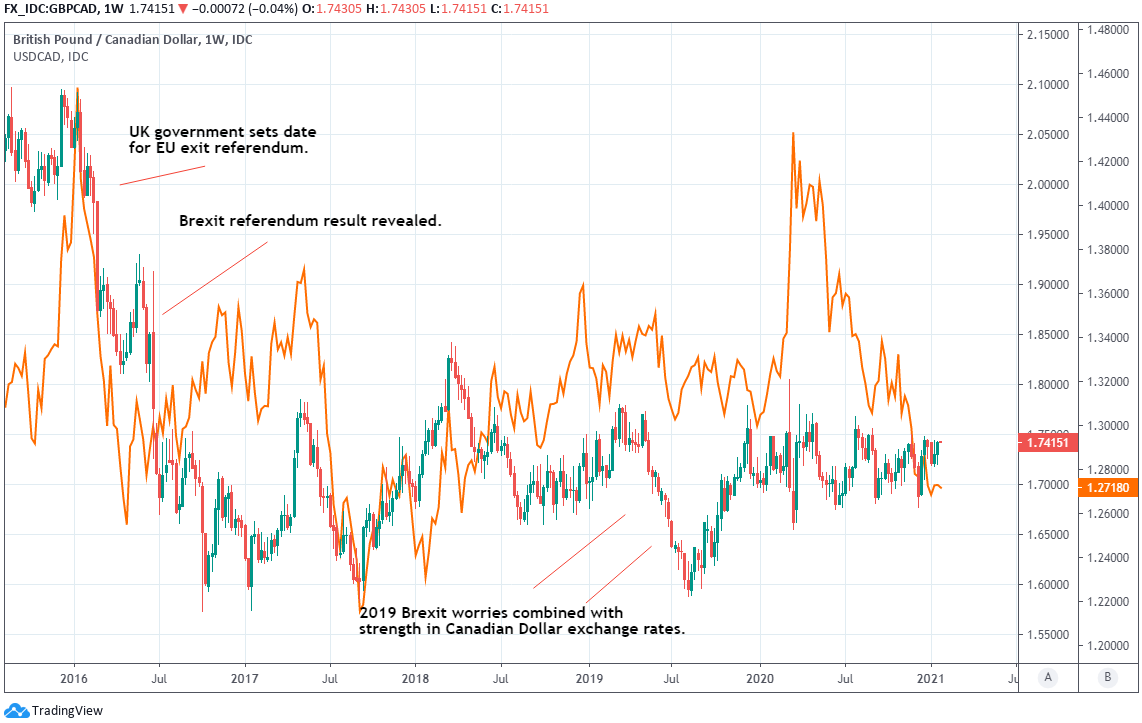