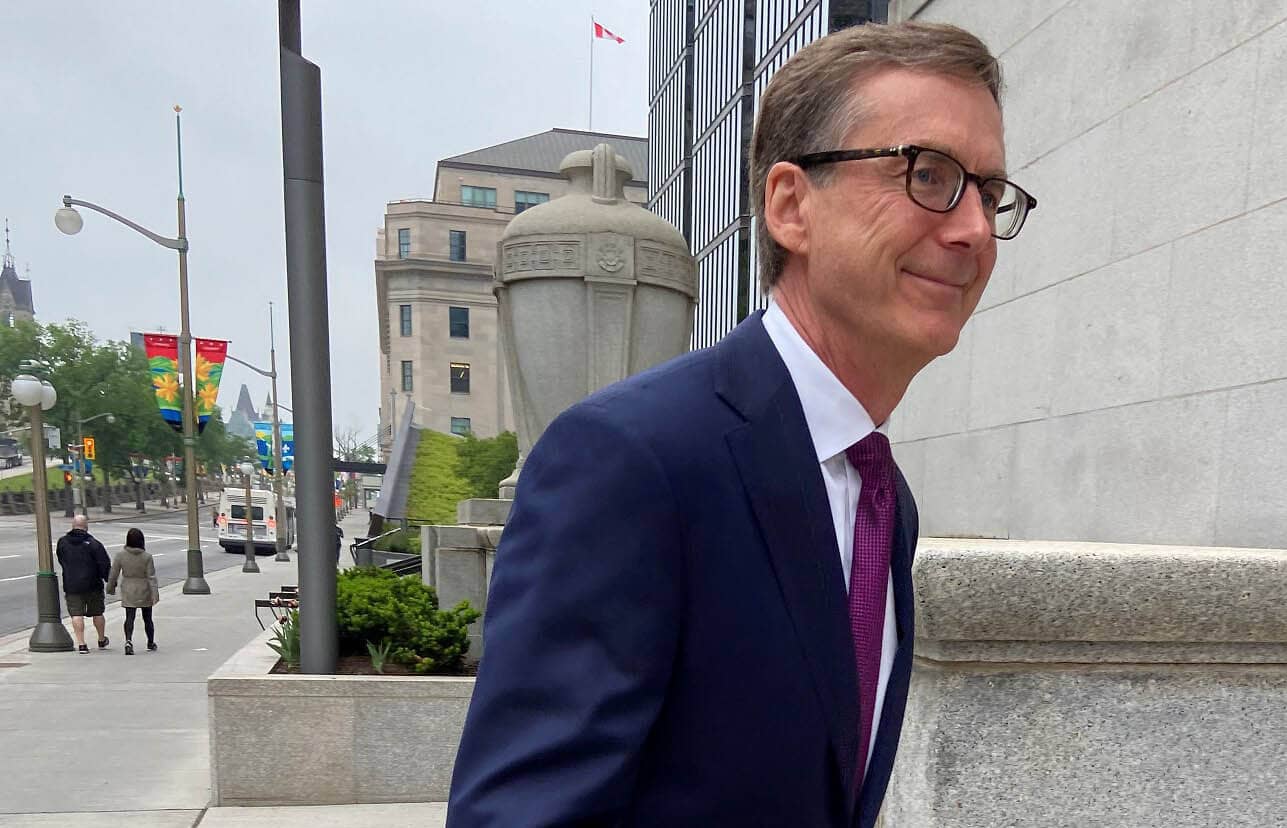 The Canadian Dollar has been tipped as a buy at BMO Capital Markets after falling to October lows when the Bank of Canada (BoC) set out to squash longer-term government bond yields, with an ongoing rebound in the U.S. Dollar and S&P 500 boding well for Canadian exchange rates.

Canada's Dollar was an outperformer on Thursday, trailing only its larger North American rival as both benefited from weakness in Europe where parts of the old continent entered a new 'lockdown' and the European Central Bank (ECB) said it will soon buy more government bonds in the coming months.

Euro and Sterling losses lifted the Dollar Index, which USD/CAD is tightly correlated with, while weighing on the Pound-to-Canadian Dollar rate. 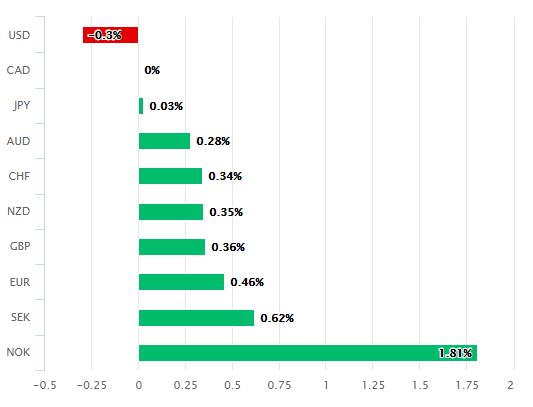 However and as is often the case during bouts of U.S. Dollar strength, the Loonie ceded the least amount of ground to the greenback out of all of the major currencies, leaving USD/CAD just a touch higher and making the Loonie a comparative outperformer for the session.

This is after BMO Capital Markets' model interpreted earlier price action as a sell signal for USD/CAD, and a buy for the Canadian Dollar.

"Our USDCAD model jumped right back into a short-USDCAD position on yesterday's close," says Greg Anderson, CFA and global head of FX strategy at BMO Capital Markets. "This is the third short-USDCAD signal of this bias phase. The first was closed last week with a 92-pip gain. The second was closed yesterday with a gain of 27 pips. Yesterday's trade exit was extremely fortunate. There is nothing in the model's methodology that is designed to sniff out a massive risk-off move."

BMO's model has been selling rallies in USD/CAD since early October, entering 'short' positions when the market rises above the model's perceived fair value level for the exchange rate.

The model tends to exit short trades - bets on USD/CAD falls - when the market falls back below 'fair value' and the latter measure stops trending downward.

'Fair value' as indicated by a combination of the model's perceived Canadian Dollar drivers sat at 1.33 on Thursday, after having risen 99 points in the prior session, although fair value as indicated by price action in the S&P 500 sat at 1.3353 and almost exactly in line with the afternoon's USD/CAD rate.

Steep losses for the S&P 500 formed the backdrop against which the model sold USD/CAD, while Canada's Dollar weakened with stocks.

But losses also built after the BoC said Wednesday it'll now reorientate its maiden quantitative easing programme toward longer and higher-yield government bonds, meaning the yields earned or returns paid by them will likely continue to fall in the months ahead. 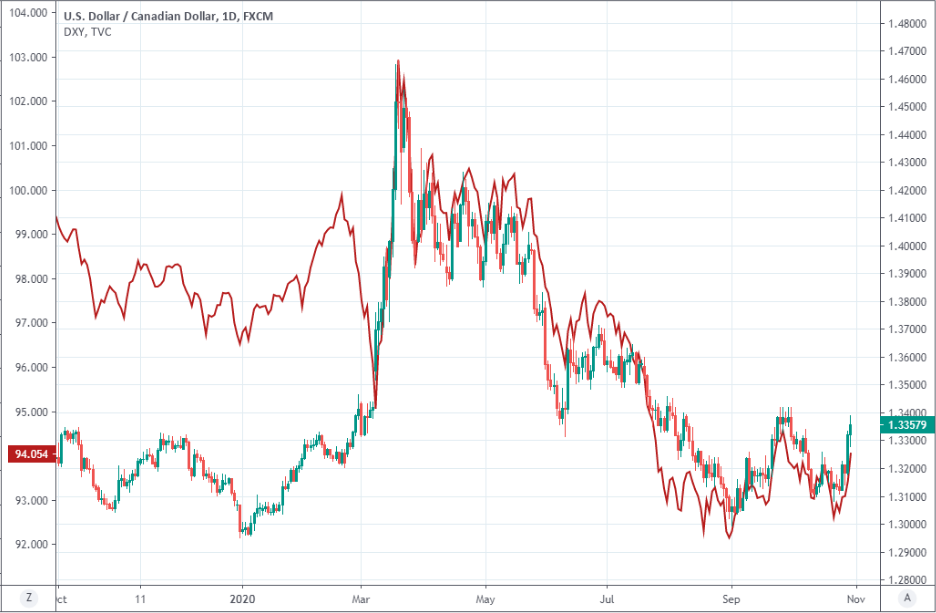 The BoC also now intends to buy "at least $4 billion per week," less than the "at least $5 billion" it's targeted since March. This BoC might've been expected to lift the Loonie if not for the simultaneous decision to take away longer-term yields, which are some of the highest among major developed economies.

Yields are not currently an active factor under consideration by BMO's model.

"That has left the pair to be driven by movements in equities and the broader USD," Anderson says in a review of BMO's forecasts earlier this month.

There was convergence between the U.S. Dollar and S&P 500 Thursday alongside divergence between CAD/USD and the same stock markets, which rallied back from their earlier losses.

It's not clear if this will continue, although BMO's model, the bank's FX strategy team as well as the wider market are all looking for USD/CAD to decline following next Wednesday's U.S. presidential election.

The election is widely expected to produce a Democratic Party administration, placing U.S. energy independence in jeopardy while stoking wider budget as well as trade deficits that could further undermine the greenback.

"Assuming our political base case, we look for US oil production to fade rapidly and for the US’s current account deficit to deteriorate sharply in 2021. With the fiscal deficit running at roughly 15% of GDP, the USD will again be an out-of-control twin deficit currency (like 2004-2007)," Anderson says. "Tax hikes on corporations and the wealthy is the other politically tinged fundamental. It is also USD-negative, but in our view, it is not as big of a deal as the energy independence fundamental." 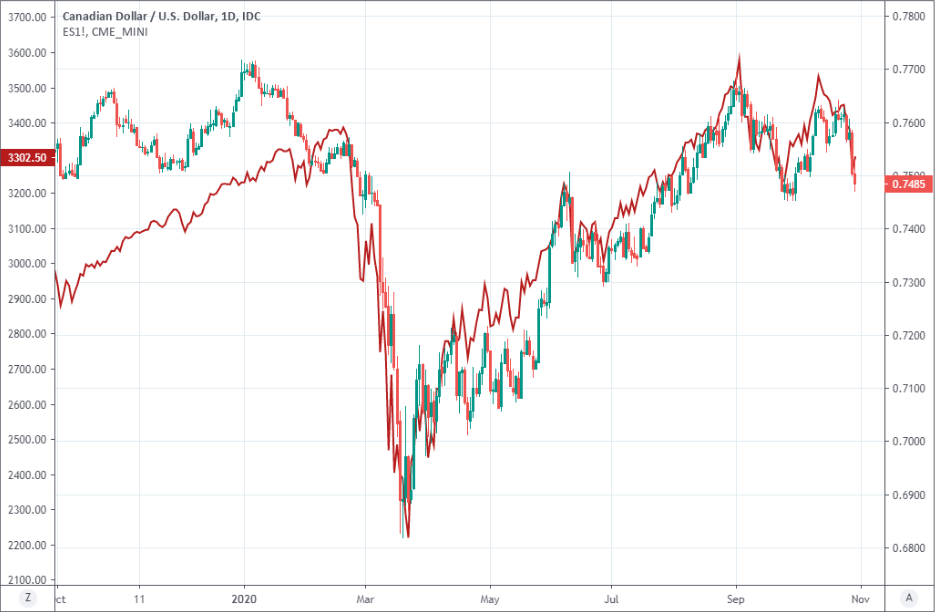