Canada’s Dollar advanced against the greenback and Swedish Krona but only just, while the Pound-to-Canadian Dollar rate was more than one percent higher amid revived hope that a Brexit trade deal could soon be reached.

“USD/CAD is trading heavy near 1.3100. Canada’s Parliament will vote today on a motion of confidence that could trigger an early general election,” says Elias Haddad, a New York based strategist with Commonwealth Bank of Australia.

The Loonie was lower against most major currencies, with earlier losses escalating up after retail sales missed expectations for August.

Sales rose by 0.4% that month when the economist consensus had favoured a 1.1% gain. Core retail sales, which ignore car sales that often have a distorting impact on underlying trends, rose by a stronger 0.5% but still underperformed expectations for a 0.9% increase.

Sales growth was reported by building material, garden equipment and supplies dealers as well as food and beverage stores, but seven out of eleven categories of merchants either reported declines for the month, or nil growth.

“September’s early read is a surprise given the strong job creation registered that month. Overall, a disappointment, and this is before the impact of the second wave,” says Avery Shenfeld, chief economist at CIBC Capital Markets. 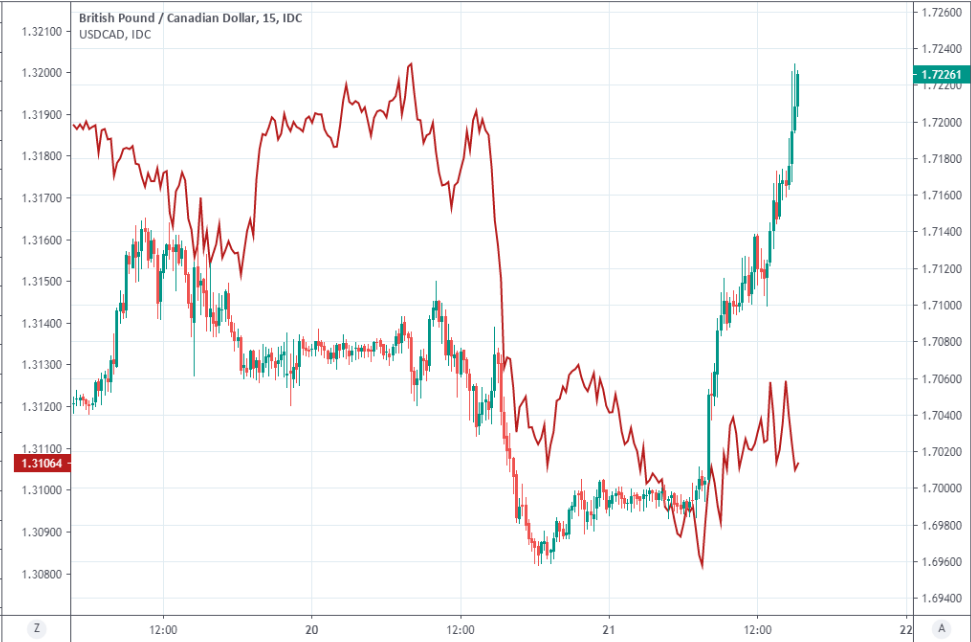 “Sales were relatively unchanged in September. Owing to its preliminary nature, this figure will be revised,” Statistics Canada says. “Excluding gasoline, the CPI rose 1.0% in September, following a 0.6% increase in August. The acceleration in the CPI was largely due to price changes in the transportation, recreation, education and reading, and shelter components.”

Canada’s economy, much like others, was already expected and is still seen recovering in the third quarter after the economic shutdown in the prior period but with spending appearing to fizzle out in September, the final quarter could now be an open question.

“Labour markets are still very weak, but government income supports are offsetting a larger share of lost income than normal. But whether retail sales momentum can be maintained through to Q4/2020 also depends on the response of governments and households to the latest resurgence in virus spread,” says Rannella Billy-Ochieng, an economist at RBC Capital Markets.

Wednesday's data does little to discourage the notion that the economy is likely to struggle as virus-related headwinds grow in the months ahead, with the Northern hemisphere now entering its cold months and typical flu season. 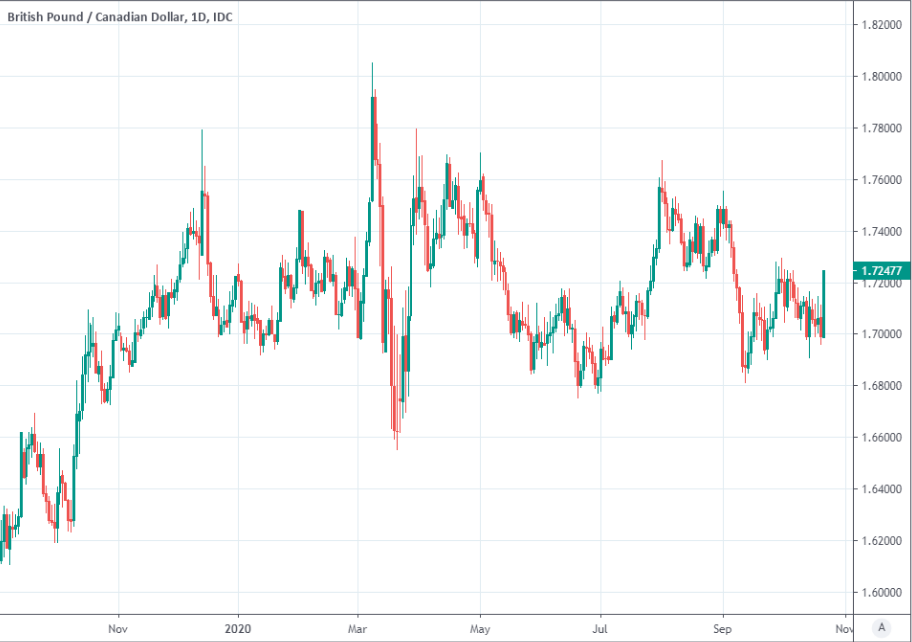 Above: Pound-to-Canadian Dollar rate shown at daily intervals with 200-day moving-average in black.

Like elsewhere including in the UK, various Canadian provinces have been subjected to enhanced restrictions as a second wave of coronavirus infections grew larger than the first at the national level.

Restrictions on activity are outright headwinds for economic output, but even without those the virus itself can have a stifling impact on the economy if it leads to increased caution among consumers and businesses.

“Infection rates with Covid 19 are on the up again, causing the economic outlook to deteriorate. Retail sales for August, due for publication today, therefore constitute old news by now. Against this background the central bank might reconsider support measures as early as its next meeting,” says Thu Lan Nguyen, an analyst at Commerzbank. “BoC governor Tiff Macklem had pointed out only recently that he and his colleagues still had many tools.”

All of this could mean that more Bank of Canada policy action is likely in the pipeline, even though it said last week that it would wind down some pandemic-related support programmes which had provided super cheap funding to mortgage lenders and small as well as medium sized corporations.

Canadian rate setters have pledged to leave the cash rate at 0.25% until “economic slack has been absorbed so that the 2 percent inflation target is sustainably achieved," and also to continue buying government bonds in order to force down their yields until the recovery is “well underway.”

But for the Canadian Dollar would not be the only currency burdened by a central bank that’s expected to expand its balance sheet again sooner or later. 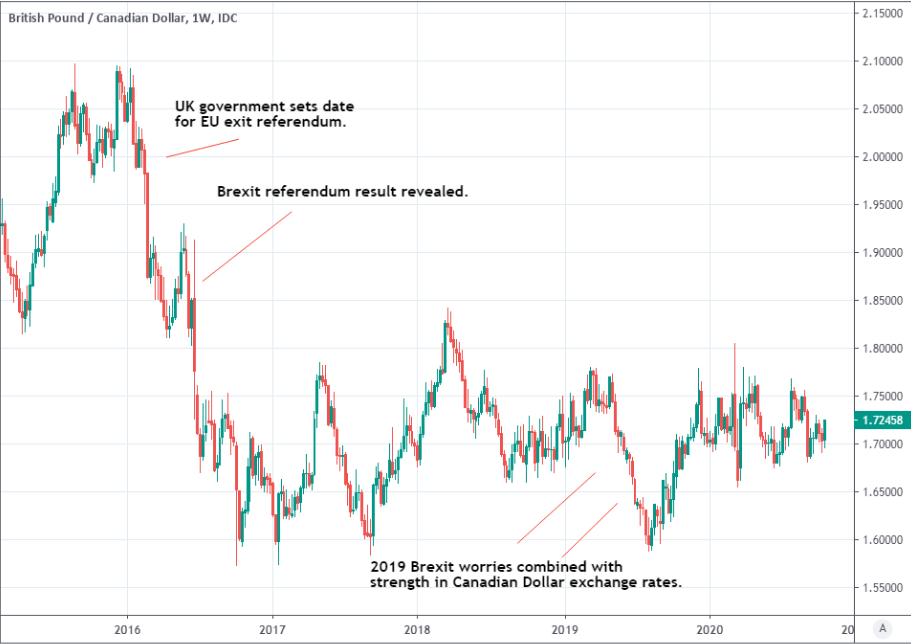 Above: Pound-to-Canadian Dollar rate shown at weekly intervals with, recovering above 200-week average.

The Federal Reserve, Bank of England, European Central Bank and others are all also expected to take further action in the months ahead so the impact of Wednesday's data and its policy implications could be short-lived.

"We still expect a deal to perhaps provide a “buy the rumour, sell the fact moment” and GBP to underperform in the medium term. But we believe now is the time to buy into the potential for a last-minute deal before mid-November and with it we expect a higher GBP in the short term at least," says Jordan Rochester, a strategist at Nomura, referring to GBP/USD.

The Pound-to-Canadian Dollar rate climbed above a key resistance level before reclaiming the 1.72 handle on Wednesday as investors welcomed the revelation that Brexit trade talks will continue this week, which came amid speculation suggesting a deal could be near despite all of the recent theatre.

“GBPCAD is holding the consolidation range established through Sep/Oct,” says Juan Manuel Herrera, a strategist at Scotiabank. “We are inclined to look for a little more GBP softness from here while 1.7135 resistance holds.”

Scotiabank had been mindful of a possible GBP/CAD fall back toward 1.67 after Sterling underperformed last week, but Wednesday's gain has now ruled out that scenario for the time being and left the exchange rate within touching distance of October highs.

Meanwhile, USD/CAD moved lower but only by -0.14%, the weakest performance of any major currency against the Dollar, and it remained above 1.31. Scotiabank says the exchange rate is consolidating and that the outlook depends on “a clear move either side of 1.30 or 1.3350.”

“Technical risks are perhaps skewed slightly towards a higher USD from here but that is not an especially high conviction view at this point,” Herrera says.

Above: USD/CAD shown at daily intervals with Fibonacci retracements of 2020 rally and selected moving-averages.