The Pound-to-Canadian Dollar rate reversed course and traded higher Tuesday after Statistics Canada indicated that only a tepid economic recovery was underway in May, after reporting historic losses for the economy in April.

Canada's economy shrank -11.6% in April when a downgraded consenus had indicated the market was looking for a -12.5% fall.

The number was very much in line with the advanced -11% estimate given by Statistics Canada when it published March figures.

All 20 sectors of the economy saw output fall in April, leading to the largest decline since monthly records began in 1961 and taking total losses for the economy to -18.2% since the beginning of the pandemic.

"We’re disappointed in Statistics Canada’s flash estimate for May which projects only a 3% rebound, having expected roughly twice that gain, although we are likely to revise up our estimates for June if, as seems to be the case, more of the economic reopening shows up that month. But thereafter, repairing the rest of the March and April wreckage will be a slower process, as recent Covid-19 flare ups here and elsewhere are showing the hazards of moving too far ahead of the virus," says Avery Shenfeld, chief economist at CIBC Capital Markets.

Statistics Canada said output rose in manufacturing, retail and wholesale and the public sector last month, although the economy remains a long way off where it was in February and could take time to fully recover. 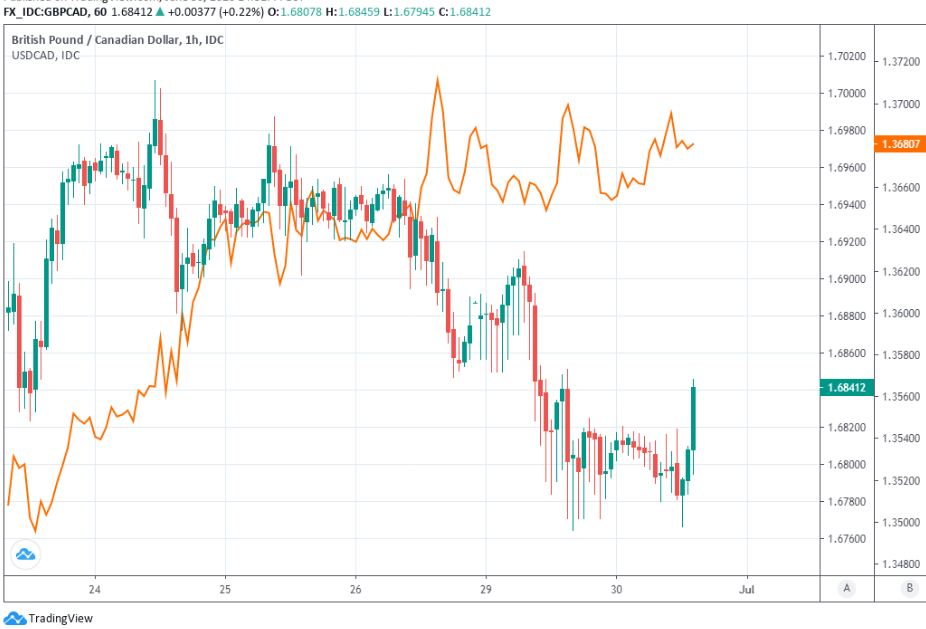 "CAD is slightly softer against the USD but has picked up ground against many of its G10 peers on the session as swings in risk sentiment still seem to affect the CAD somewhat less—for better and worse—than its commodity cousins. The CAD has lagged behind the rebound in the likes of the AUD and NZD since the rebound in risk assets developed in March, with soft oil prices dampening the CAD recovery," says Shaun Osborne, chief FX strategist at Scotiabank.

Canada's Dollar had outperformed all but its safe-haven rivals heading into the release but faltered in the aftermath, indicating disappointment over the advance estimate of May GDP. The oil and trade sensitive economy will benefit automatically from May efforts to reopen but with the global pandemic still in full swing and a second wave seeping across the U.S., earlier hopes for a quick v-shaped recovery are fading fast.

The Pound-to-Canadian Dollar rate rose from 1.6760 and near a major level of support to trade above 1.68 following the data though Canada's Loonie remained higher for the session against all major rivals other than the safe-haven currencies like the greenback and Japanese Yen. For a rebound to be more than just a flash in the pan the Loonie would have to beat Sterling in a continous ugly pageant, a tall order given the comparatively worse virus situation and trajectory of the Brexit trade talks.

"The late May low near 1.6850, which formed the centerpiece of more constructive weekly price action, has been overcome and we note that shorter-term trend signals are leaning more GBP-bearish at this point. Downside risks for the GBP appear to be growing a bit more significantly again. Short term support is 1.6755," says Scotiabank's Juan Manuel Herrera.

The UK government retightened the 'lockdown' of Leister City, a place with a population of around 300k, after new coronavirus infection numbers picked up slightly in the last fortnight. Nationwide infection numbers have fallen markedly in June though not in Leister. Meanwhile, Prime Minister Boris Johnson's eagerly awaited announcement of an infrastructure spending packaga went down like a damp squib with the market.

"Prime Minister Boris Johnson’s announcement today that £5bn (0.2% of GDP) of spending on infrastructure projects will be brought forward into 2020 is fairly underwhelming and is unlikely to do much to help the hardest-hit parts of the economy over the coming months. But at least the announcement signals that the government’s intention is to sustain the fiscal stimulus further ahead, rather than lurch towards fiscal austerity," says Ruth Gregory at Capital Economics.

The Pound-to-Canadian Dollar rate has fallen throughout the second quarter, leaving it down -5.47% from its March 31 peak on Tuesday, in part because the Loonie has been more resistant to a steadying greenback than Sterling. 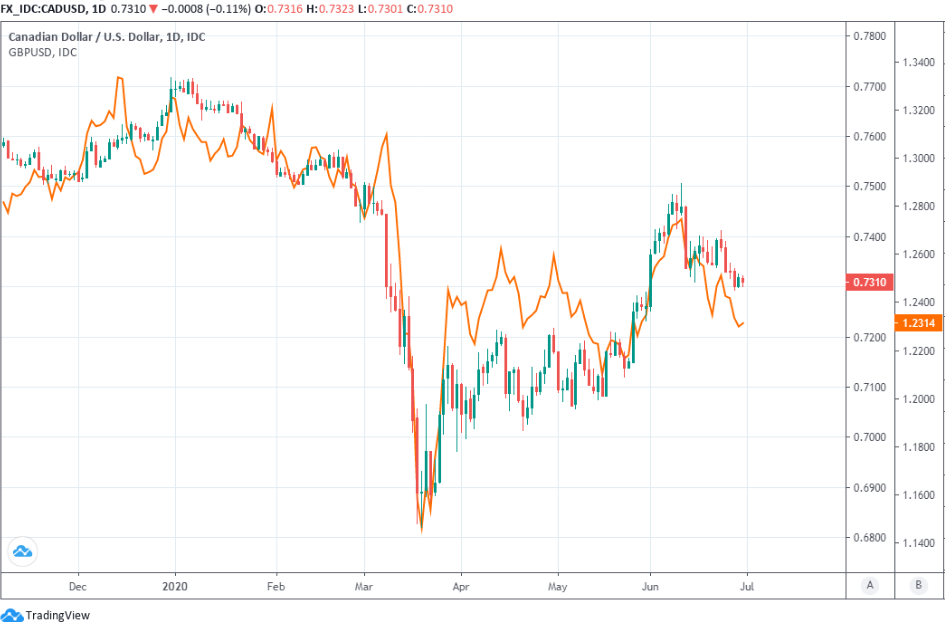 GBP/CAD is an amalgamation of GBP/USD and USD/CAD, the latter of which has been constrained in its upward climb by the recovery in oil markets, asian currencies and its high sensitivity to resilient stock markets.

"USDCAD is bumping up against important resistance in the low 1.37 region defined by the trend drawn off the March peak (1.3716) and the 40-day MA (1.3744). The grind higher from the test of 1.33 earlier in June appears to have the support of short term trend strength oscillators, which are aligned bullishly. But that is not reflected in the longer term studies. We think this keeps the balance of risks tilted towards range trading and the mid 1.37 area holding USD gains for the moment," Herrera says.

The Pound-to-Canadian Dollar rate would rise to 1.6914 if USD/CAD hit 1.3750 and GBP/USD held around Tuesday's 1.23 level, though Scotiabank sees the latter being vulnerable to further losses in the short-term, with 1.22 and 1.21 both on the radar as possibilities. Those kinds of levels for GBP/USD would send the Pound-to-Canadian Dollar rate down to 1.6776 and then 1.6639 in a world where USD/CAD is trading at 1.3750.

Sterling would need USD/CAD to rise all the way to 1.39 in order to avoid ceding ground to Canada's Loonie if GBP/USD was to reach 1.21. Formal Scotiabank FX forecasts have implied for months a Pound-to-Canadian Dollar rate of 1.6891 for the end of June, although Sterling is also projected to remain around there over the coming months and through year-end.