The Pound-to-Canadian Dollar rate has been left testing a key level of technical support that will be at risk over the coming days from both domestic as well as international factors, from the Bank of England (BoE) to the performance of global stock markets, which will be key to risk appetite in the wider market.

Sterling limped into the weekend after underperforming most major rivals Friday when stock markets softened and the UK government formally announced that it does not intend to extend the Brexit transition period. Losses dragged the Pound-to-Canadian Dollar rate back to the 1.70 level from close to 1.72 on Wednesday and although the exchange rate fell below its 200-day moving average at 1.7077, it left intact the 200-week average at 1.6985.

The Pound-to-Canadian Dollar rate had previously reclaimed its 200-day average at 1.7073 last week but was undone by Friday's losses in Sterling. It could find continued support around 1.70 over the coming days but much depends on investor risk appetite and price action in the Loonie  given that Sterling could be weighed down by both Brexit related developments as well as the BoE's Thursday policy decision.

That leaves a lot to be determined by the trajectory of stock markets, which many currencies including the Pound and Canadian Dollar have tracked closely of late. This means investors' perceptions of the threat posed by a possible second wave of coronavirus outbreaks in some U.S. states and in Beijing will also be important. GBP/CAD has renewed its negative correlation with stock markets of late so any increase in risk aversion might reinforce support for Sterling early on, although that's not certain.

"We think there is a risk that the early reopening of some US states over the past few weeks and the recent re-emergence of COVID-19 “hotspots” in some areas may slow the US recovery and weigh on the USD (even if US equity markets struggle to advance under these conditions). This will contrast with other economies that have perhaps managed lockdowns more rigidly," says Sean Osborne, chief FX strategist at Scotiabank. 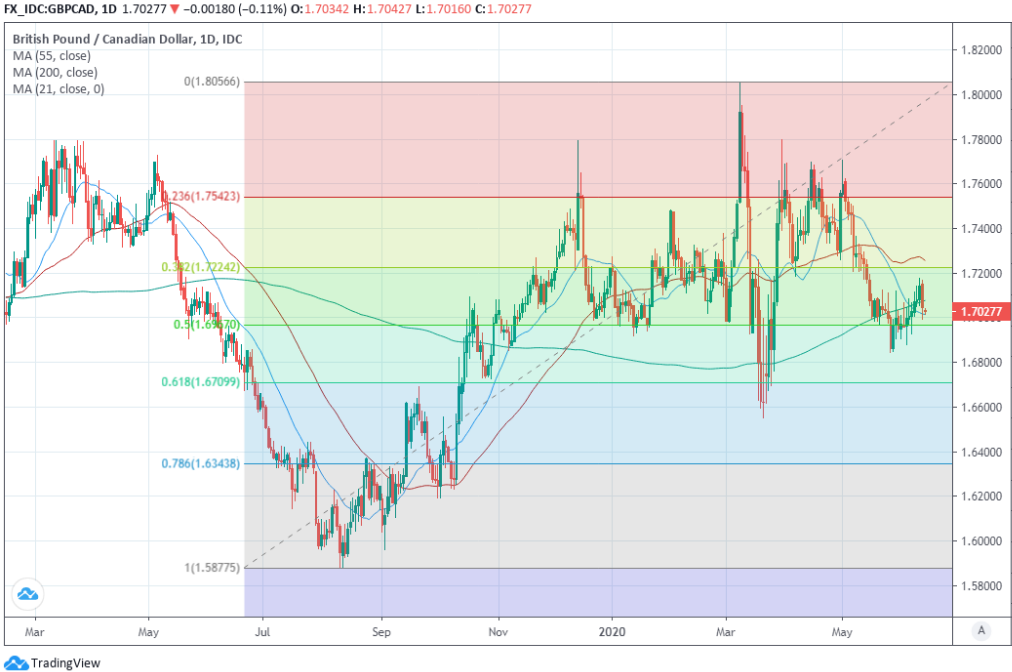 Above: GBP/CAD at daily intervals with moving averages (200-day in green) and Fibonacci retracements of 2019 recovery.

The Canadian Dollar took a pummelling last week and a bigger one than the Pound, which led USD/CAD nearly 1.5% higher and enabled the Pound-to-Canadian Dollar rate to rise by 0.42% for the period. However, what matters most for GBP/CAD in the week ahead is the relative pace of gains and losses in USD/CAD and GBP/USD. The latter is tipped to remain under pressure, although much is still to be determined by developments in London.

"On balance, we are wary of the risk of the USD slide turning but we think USDCAD is likely to head somewhat lower still over the next few weeks (the obvious caveat here is risk appetite). Minor USDCAD rallies should continue to draw in selling interest. Our week-ahead model suggests some modest downside risk for USDCAD over the coming five days and a potential range of 1.3375/1.3750," Osborne says.

However, if the calendar of event risks that litter this week's path ahead go the wrong way for Sterling then GBP/USD might be likely to weaken independently of other currencies and to fall back into its earlier and even lower range between 1.21 and 1.24. A GBP/USD rate that trades at the 1.2250 midpoint of that earlier and even lower range, as USD/CAD is testing 1.3750, would be enough to send the Pound-to-Canadian Dollar rate back to 1.6845. 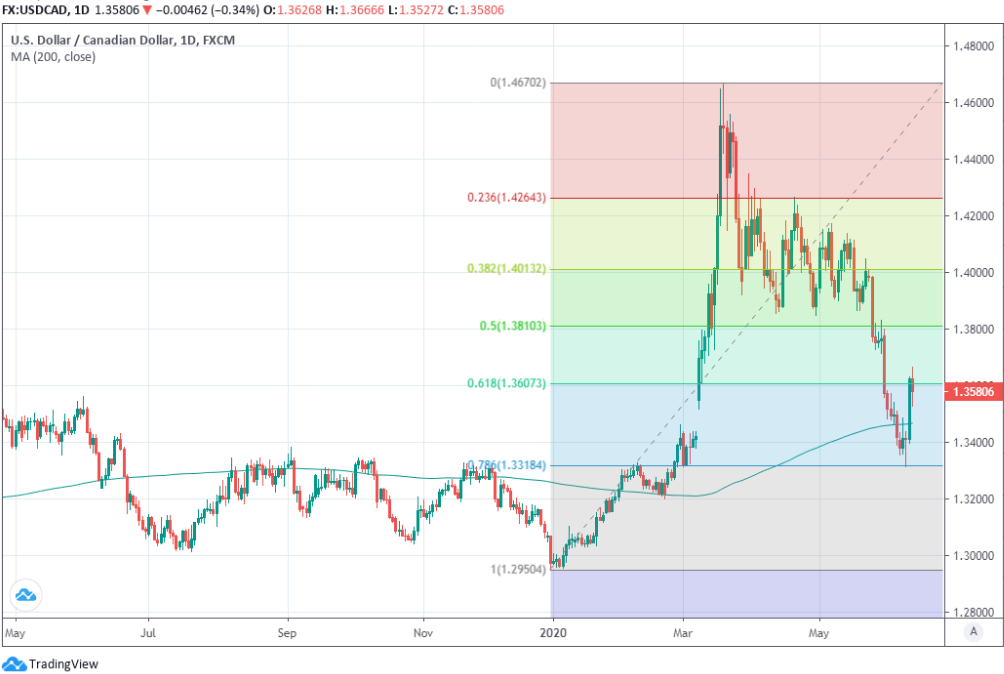 Above: USD/CAD at daily intervals with 200-day moving-average in green and Fibonacci retracements of 2020 uptrend.

The 1.6845 leve has not seen since late in the month of May when Sterling underperformed major rivals, although at the bottom of the earlier and lower GBP/USD range the GBP/CAD rate would trade around 1.6639. That's effectively the bottom of the 2020 range. Both outcomes would require nil progress from this week's Brexit meetings as well as a Sterling-unfriendly update from the BoE, although these cannot be ruled out.

"GBP/USD is vulnerable to more downside.  The UK on Friday formally rejected the option to extend its post‑Brexit transition beyond the end of this year.  This means the UK will leave the EU on 31 December 2020 with either a new economic partnership or no deal.  UK Prime Minister Boris Johnson and European Commission President Ursula von der Leyen meet on Monday to help give post‑Brexit trade negotiations more traction," says Joseph Capurso, a strategist at Commonwealth Bank of Australia. "On Thursday, we expect the Bank of England (BoE) to leave its Bank rate at 0.10% but increase the target for the stock of asset purchases by an additional £100 billion."

Prime Minister Boris Johnson will e-meet EU chief executive Ursula Von der Leyen Monday, ahead of Thursday's European Council summit, and many in the analyst community are hoping to see a push for compromise between the two parties, although few have much confidence that one will come.

"We expect a more volatile GBP in the week ahead. Beyond broader developments in risk sentiment, the outcome from the latest Brexit talks and BoE policy meeting are likely to be important for GBP performance," says Lee Hardman, a currency analyst at MUFG. "The sharp US equity market sell-off this week has been the first major setback for recovery trades...we believe that the upside for recovery trades is likely to prove more limited after strong gains in recent months. That may imply a period of consolidation for USD." 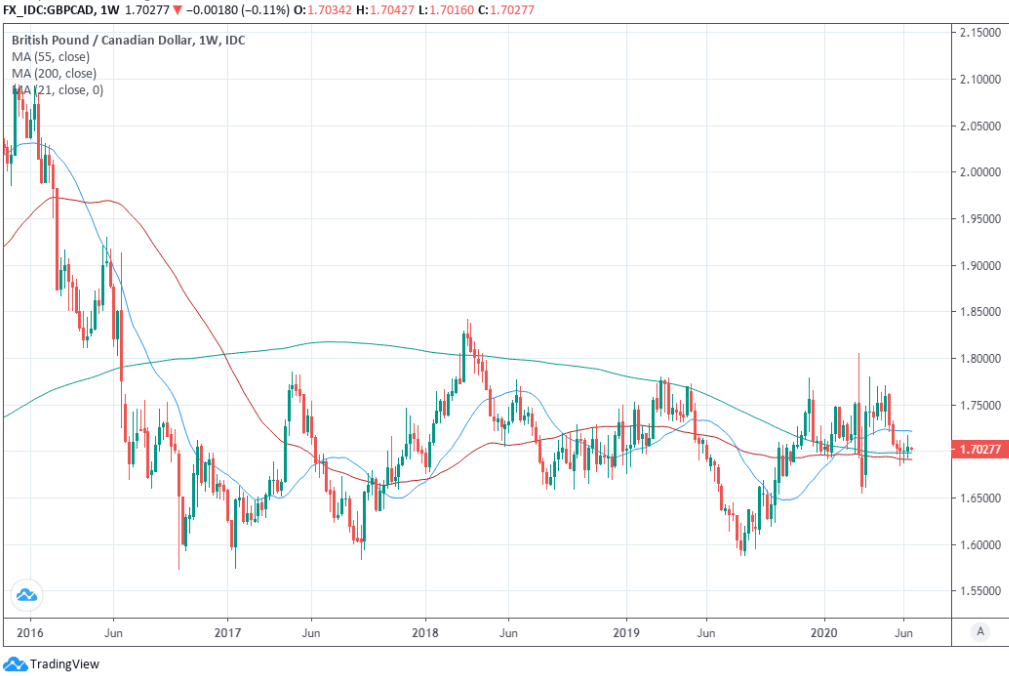 Above: Pound-to-Canadian Dollar rate at weekly intervals with 200-week moving-average in green, and other averages.

Many investors are already betting against Sterling and the market has become well accustomed to the idea of deadlock in the trade talks so even a few words of optimistic ambition from the two leaders might be enough to seem like a game-changer on Monday. But if the meeting comes and goes while leaving only deadlock behind in its wake the Pound might struggle.