- CAD resilient in face of recovering USD this week.

- And Nomura says CA growth score the worst in G10.

The Canadian Dollar has been resilient in the face of a stabilising U.S. rival this week and it remains the best performer in the G10 universe for 2019 but opinion is divided about the outlook for the Loonie, especially now the Federal Reserve (Fed) has begun to cut its interest rate.

Canada's Dollar has fallen just half a percent against the greenback this week, which is a mild decline when compared with the falls that undergone by the Brexit-transfixed Pound Sterling , the oil-exposed Norwegian Krone and the China-sensitive Australian Dollar.

Many ascribe those performance to bond yields. Canadian yields are the second highest in the G10 universe and being supported by the Bank of Canada (BoC) cash rate of 1.75% that analysts say is unlikely to go lower anytime soon. Meanwhile, most other G10 central banks have either cut their own rates already or are preparing to do so.

The Loonie has outperformed because the gap between the Canadian cash rate and its U.S. counterpart is now narrower than it was before the Federal Reserve slashed the Fed Funds rate on Wednesday, for the first time since the aftermath of the financial crisis. And with that cut having come accompanied by the suggestion the bank might not cut U.S. rates quite as much as markets had hoped for over the coming quarters, the pressure on the Bank of Canada to lower its cash rate is ebbing fast. 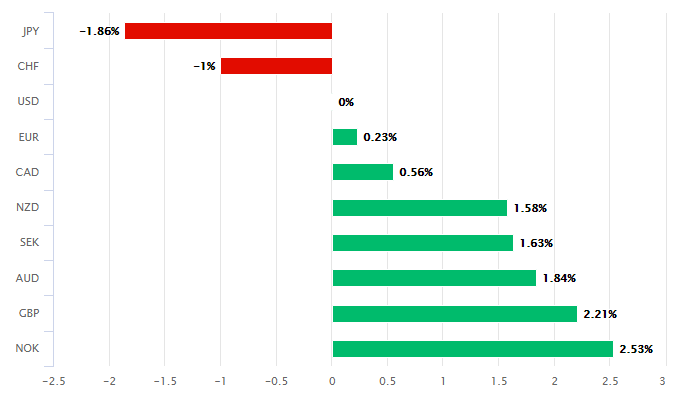 "A non-committal Powell means even less urgency or immediacy for Poloz to follow suit. While we believe the USD will remain firm on a broad basis, we are inclined to think USDCAD will lag. The [yield spread compression] suggests that the topside push in USDCAD should be limited, if not already complete," says Mazen Issa, a strategist at TD Securities. "CAD is likely to fare better on the crosses as its carry status is second to the USD in the G10."

The BoC was widely seen as only really likely to cut its rate in order to avoid being left too far behind by the Fed, because the Canadian economy has stood apart from the G10 crowd in recent months, seemingly impervious to the slowdown gripping the global economy and inflation is close to the 2% target so the bank has little incentive need to actually follow the Fed.

This, and the new lower Fed rate, has seen the gap between bond yields on either side of the U.S.-Canadian border narrow in favour of the Loonie this week and TD Securities' Issa forecasts that a continuation of that trend will push the USD/CAD rate down to 1.28 by year-end, from 1.3222 Friday. But TD is not alone in its bullish outlook because another Toronto-headquartered lender is also tipping the Loonie for further gains over its U.S. rival. 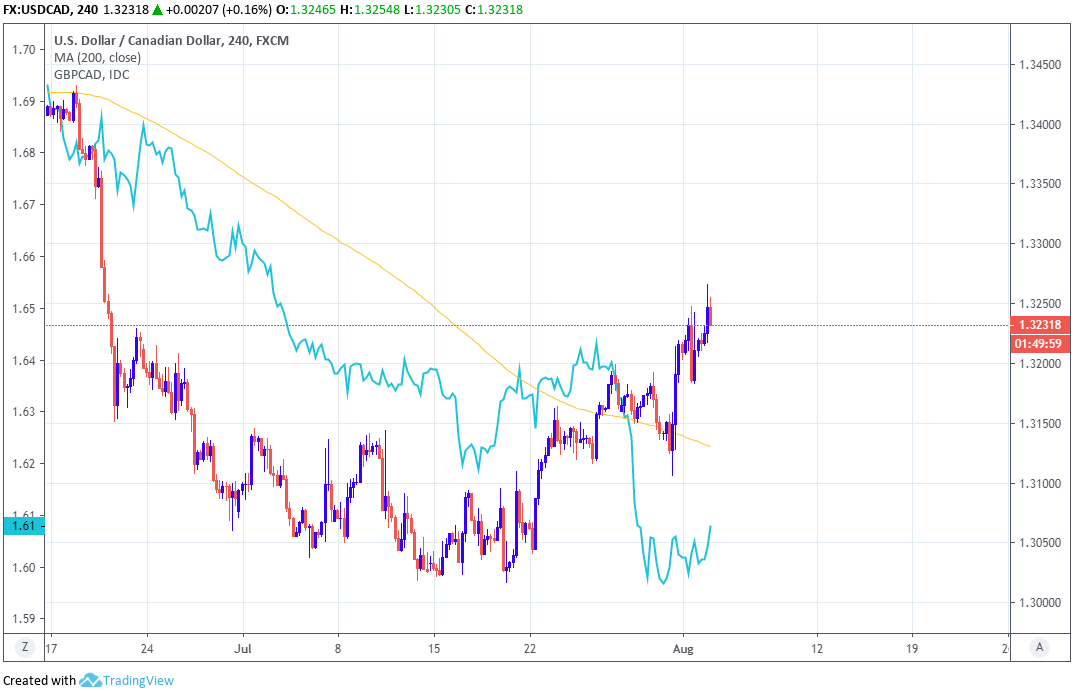 "The CAD is soft and trading defensively vs. the USD while outperforming most of its G10 peers in an environment of renewed risk aversion. Trade policy uncertainty is once again dominating as market participants assess President Trump’s latest tariff announcement," says Shaun Osborne, chief FX strategist at Scotiabank. "We remain fundamentally constructive on the CAD and note the renewed rise in our fair value estimate (USDCAD 1.2601, well off the July 25 1.2920 high heading back toward the early July low closer to 1.2500)."

The Canadian Dollar seemingly unassailable hold on the top spot in the G10 table means bullish forecasts for it aren't uncommon but increasingly, some are beginning to doubt the Loonie's prospects. Morgan Stanley was the latest to call time on the Canadian Dollar's period of outperformance this week, with a recommendation that clients buy the USD/CAD in anticipation of a move back up to 1.3650 - it's January 2019 high.

"We view the USD/CAD upward correction as likely to continue. CAD has the strongest correlation to financial market indicators linked to growth and risk sentiment – equities and long rates. The combination of a more hawkish than expected Fed coupled with a continued softening in the growth outlook suggests that risk appetite is likely to come under pressure,keeping USD/CAD supported," says Hans Redeker, head of FX strategy at Morgan Stanley. 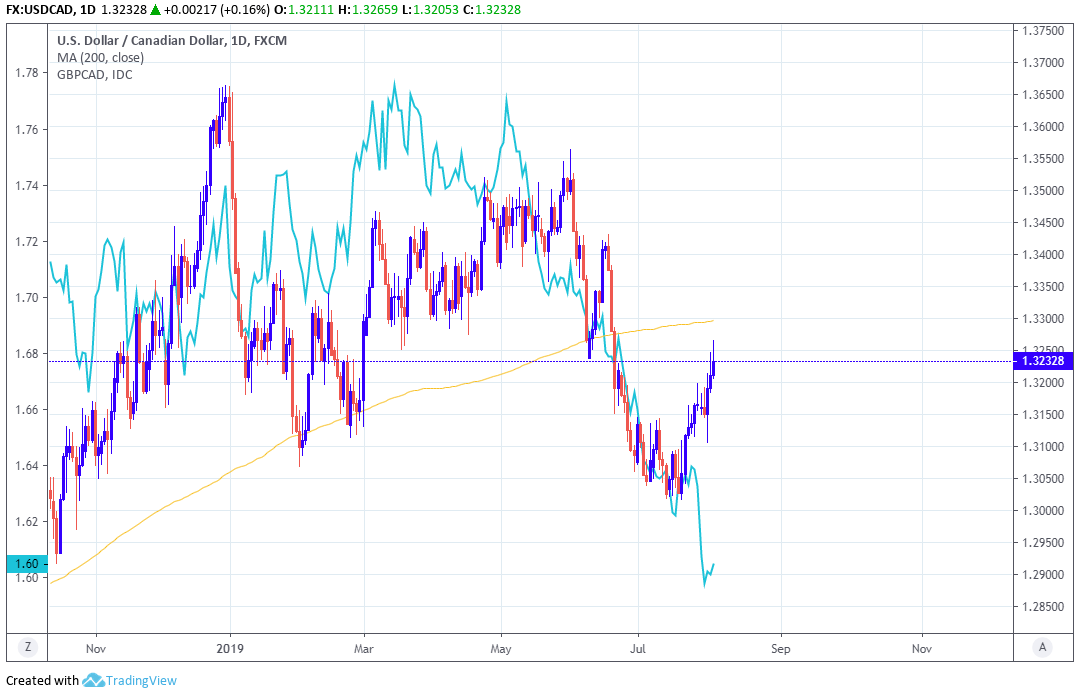 Canada's Dollar is sensitive to changes in investor risk appetites as well as the ebb and flow of the global economy. And President Trump wrote in a Twitter post late Thursday that China's remaining $300 bn of exports to the U.S. will be subjected to a 10% tariff from September 01, upsetting markets as well as threatening a further blow to an already-weakened global economy.

The U.S.-China trade conflict and the impact it has elsewhere in the world risk ending Canada's period of economic outperformance, which might then threaten the Loonie's place in the currency league table. Morgan Stanley also notes weakness in the price of oil, Canada's largest goods export.

Morgan Stanley is betting on the latter while Japanese investment bank Nomura, which has a system for assigning "scores" to individual economies, says the growth outperformance may already have come to an end.

Canada's score is consistent with levels that have historically prompted the BoC to cut its interest rate steeply.

"Canada is in a conundrum, very impressive data surprises have driven recent CAD strength, but it has one of the worst growth scores in the G10," writes Jordan Rochester, a foreign exchange strategist at Nomura, in a recent note to clients. 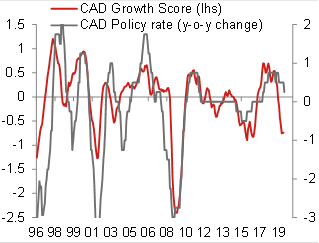