- Our technical studies forecast a continuation to 1.8500

The Pound-to-Australian Dollar exchange rate is in a steep uptrend which is likely to continue after forming a reliable continuation pattern during the previous week.

The pair successfully met our last upside target at 1.8200 after extending its uptrend and breaking clearly above the February highs. 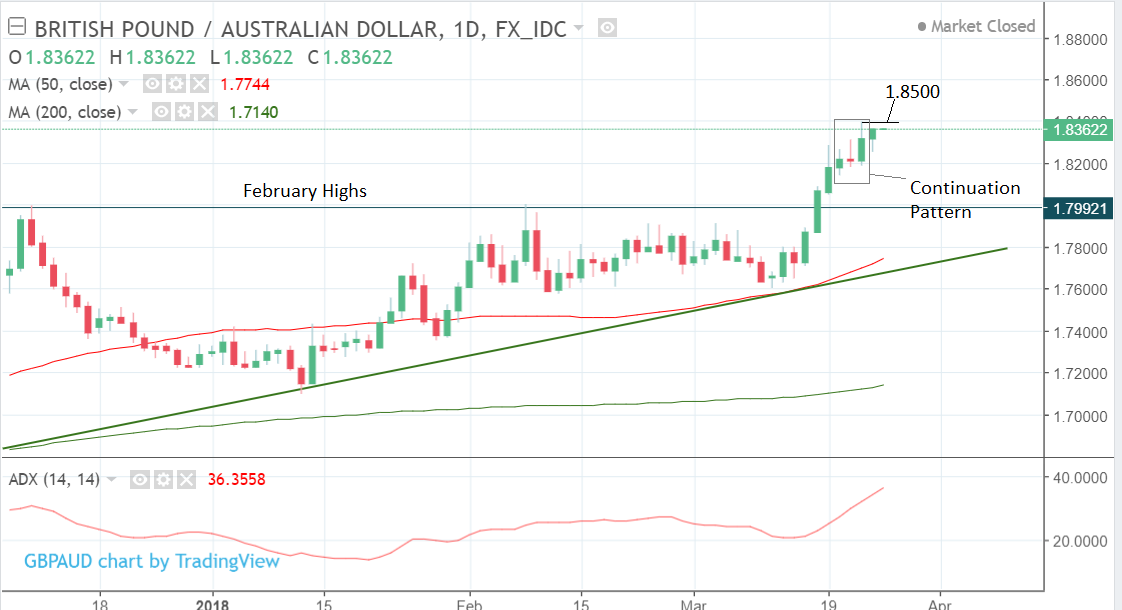 It has now formed a three-bar continuation pattern which we have enclosed in a box on the chart above to highlight.

When it coincides with rising ADX in the 30s then it is generally considered a very reliable continuation signal, with a circa 80% probability of rising by another 150 basis points.

We, therefore, expect the exchange rate to continue higher and, subject to confirmation from breaking above the 1.8398 highs of the third bar, to reach at least the 1.8500 round number.

Although this is actually less than the 150 points expected, (that would suggest a move up to 1.8548 instead), 1.85 is a significant round-number and therefore likely to attract a lot of sellers taking profit at that level and this will increase the risk of downwards pressure.

Data and Events to Watch for the Australian Dollar

The broader global context matters for the the Aussie Dollar this week; the currency was a G10 underperformer last week, weighed down by the deteriorati on in  globalrisk sentiment following news of US tariffs on imports from China and of the latter’s potential retaliation.

"While the new tariffs (likely on manufactured products) are likely to have a lesser effect on Australia’s exports compared with steel tariffs, the AUD remains acurrency seen as highly sensitive to changes in China’s growth outlook and global risksentiment," says Hamish Pepper, an analyst with Barclays in Singapore.

At the start of the new week we note markets are trading with more confidence now that the events of the previous week have been absorbed. Aiding to the more positive tone is news that South Korea has been exempted from US steel tariffs, in a sign that the US is willing to negotiate on trade, this might suggest recent fears of a looming international trade war is overblown.

"Markets are overreacting to President Donald Trump’s threats of a trade war," says Peter Rosenstreich, an analyst with Swissquote Bank in Gland, Switzerland who says there remain expectations for a favourable outcome with limited escalations based on negotiations.

"In our view Trump his using issue for political gain rather than actual trade repositioning. This action gives Trump a nice bullet point for stump speeches on the 2020 campaign trail. But he gains little from sparking a full-blown trade war. In addition, countries still taking grievances to WTO indicated trade remain within a management framework," adds Rosenstrei

Looking at the calendar, the main event in the week ahead for the Australian Dollar is the speech from Reserve Bank of Australia (RBA) Governor Kent on Tuesday, March 27 at 1.45 GMT.

The RBA sets interest rates in Australia and these have a profound impact on the currency so Kent's speech could be significant for the Aussie Dollar. Current expectations are for the RBA not to alter rates until 2019 and then to raise them. Higher rates equal a stronger currency as they attract more inflows of foreign capital drawn by the promise of higher returns.

Recent employment data was extremely strong, which might encourage Kent to take a more hawkish (meaning in favour of higher interest rates) line, but the still-high underemployment rate is a let-down, as it indicates too many people in work are stuck on low hours and businesses cannot afford to offer them more.

"There is still a lot of spare capacity in the jobs market despite the strong run of growth we have had. Both the unemployment and underemployment rates will probably need to fall a fair bit further from here before wages growth starts to pick up," says Kristina Clifton senior economist at Commonwealth Bank of Australia.

Wage growth is required to drive up inflation and get the RBA to raise interest rates, so until that happens the RBA will probably remain on the sidelines.

Apart from Kent's speech, the hard data releases in the week ahead include February new home sales at 1.00 on Tuesday and private sector credit out at 1.30 on Thursday.

"The more significant interest for next week’s publication will come from the national accounts detail released at this time," says Investec of the GDP release.

This will include revisions to data on household income and personal finances in general, which affect overall consumer spending, the biggest driver of growth for the economy.

Investec, however, sees a chance of a lift to -8 in March because of rising wages, less job uncertainty, easing inflation, the agreement of a Brexit transition deal and "the uncharacteristically “Tiggerish” Chancellor at his inaugural Spring Statement."