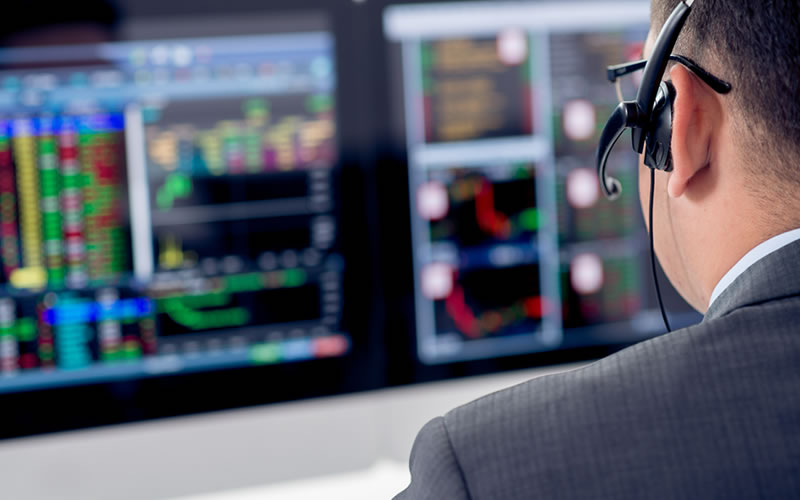 UK and global market sentiment will dominate GBP/AUD this week while our technical studies note the exchange rate might be looking to head higher once more.

The Pound-to-Australian Dollar exchange rate is rising in an ascending channel on the weekly timeframe and is therefore probably in a medium-term uptrend.

Our studies of this timeframe note that given there are no major bearish signs on the charts we favour the Pound extending higher over coming weeks. 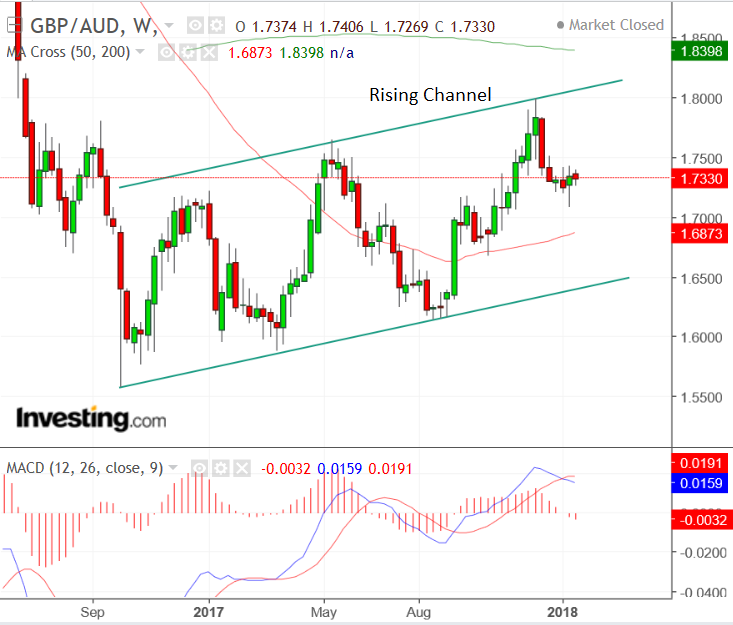 Considering the shorter-term leads us to the daily chart (below) where we can see that the pair has been in a short-term downtrend with the aformentioned medium-term uptrend.

The Pound corrected lower from the December highs after touching the upper channel line, however, this downtrend is now in doubt due to strong reversal signals which suggests we could be nearing a return to the broader uptrend. 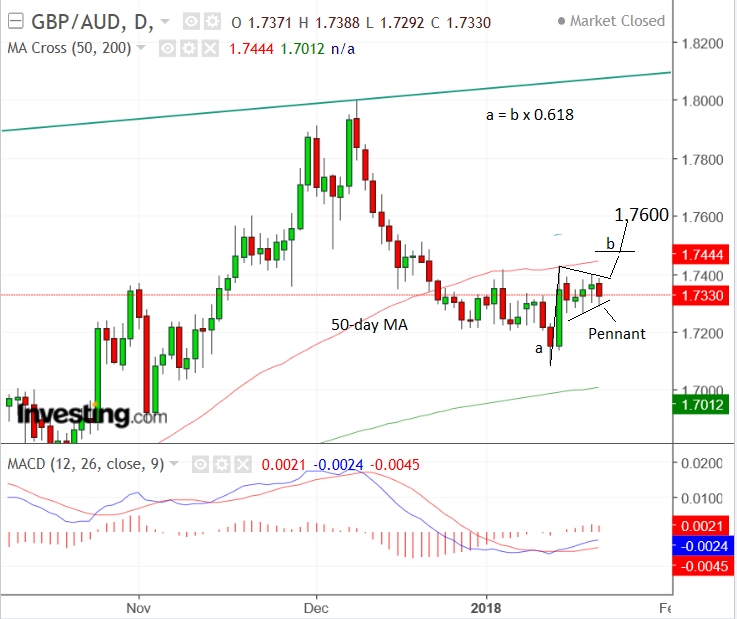 The downtrend was punctuated by an especially strong up day on January 12 which we think has probably begun a rebound.

Since then the pair has seen a line of squat days unfold forming what may be a bullish pennant pattern, which is a very small triangular consolidation following a steep move which eventually resolves in a continuation of the up move higher 'b', which is of a similar, or 61.8%, length as the first up move 'a'.

This generates a minimum upside target of 1.7600, with a breakout confirmed by a break above 1.7450, which would also make a definitive break above the 50-day moving average (MA).

Data and Events for the Pair

There are no major data releases for the Australian Dollar in the week ahead and Friday, January 26, is Australia Day, which is a public holiday.

The major data impacting the Aussie will probably come from moves in the commodity markets which it is highly correlated to, especially metals, or because of moves motivated by the Pound.

Therefore, global risk sentiment could be the factor to watch when it comes to the Aussie side of this exchanage rate.

The two big releases for the Pound next week are Employment data and fourth quarter GDP.

Employment data for November is out on Wednesday at 9.30 GMT and is forecast to show the unemployment rate staying fixed at 17-year lows of 4.3%.

Wages are also likely to be in focus as they influence inflation which in turn influences interest rates and Sterling.

Wages rose by 2.5% in the previous month of October compared to a year ago and are expected to rise the same in November.

Unfortunately for workers, this is a half a percent below inflation at 3.0%, which means they are essentially getting poorer.

This suggests consumption may fall as people tighten their belts which will reduce growth.

Evidence of wages rising in December, however, from a new survey conducted by IHS Markit suggests a possibility of an upside surprise in Wednesday's earnings data, although the official data will be for the month before the IHS Markit data.

The other major release in the week ahead is Q4 GDP on Friday at 9.30.

Consensus estimates are for GDP to equal 1.4% in Q4 from 1.7% in Q3  reflecting the slowdown in the economy due to the corrosive effects of high inflation and businesses holding back from making investment decisions due to Brexit uncertainty.

A fall to the estimated 1.4% would mean the annual growth rate on a quarterly interval comparison basis will have fallen to lows not seen since 2009 - over eight years ago during the financial crisis.

The quarterly rate, however, is forecast to remain at 0.4% like Q3, and the year-on-year data may reflect a more negative situation than the quarterly figures suggest.

The economy has shown and will continue to show resilience when GDP data is released, says IHS Markit Economist Bernard Aw.

"Preliminary estimates of UK GDP for the fourth quarter are eagerly awaited for confirmation that the economy continues to show resilience on the face of Brexit uncertainty," says Aw.

From a growth perspective, the outlook may be improving after recent conciliatory comments from French President Emmanuel Macron and other leading EU figures suggested the UK could have a bespoke trade deal after Brexit, and consequently a  softer-landing for the UK economy.