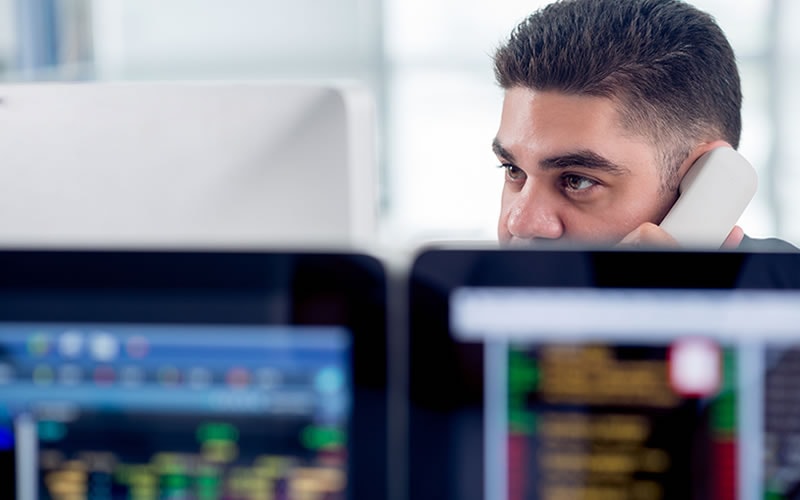 The Pound to Australian Dollar exchnage rate (GBP/AUD) had been moving sideways through the course of May as Sterling's strong run from mid-March through to the end of April faded.

The big move down from the May highs reached a trough low of 1.6718 a week ago and this low has held.

Whilst previously we characterised the as a 3-wave, a-b-c correction, we now are of the view that it is probably composed of more waves and, therefore, could be the start of a new, very young, downtrend. 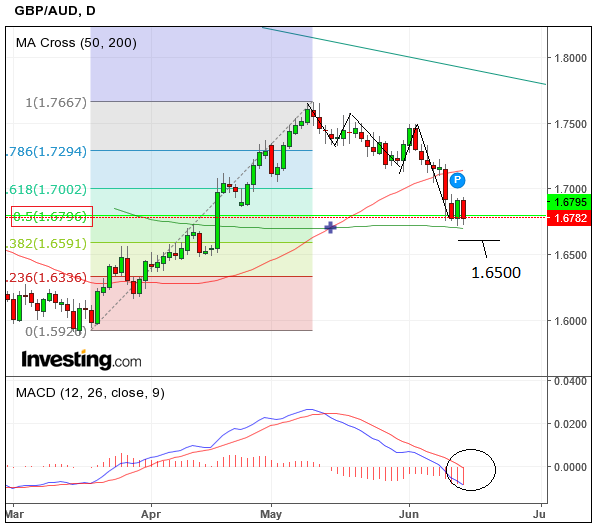 The MACD indicator is below the zero-line now, which is also a sign that the trend is down, and that the pair, is therefore biased to moving even lower.

The 200-day moving average remains an obstacle to more downside and would need to be clearly broken through for us to be confident of a continuation.

In line with our June 11 forecast, we see a break below 1.66 confirming a clear breakdown of the exchange rate to a target at 1.6500.

Data Ahead for the Australian Dollar

The next major release of the week for the Australian Dollar comes on Thursday, June 15 at 2.30 BST when Australian Employment data is released and expected to show a 10k rise in May; and for the Unemployment rate to remain at 5.7%.

This will probably be a key release for the Aussie as a poor employment market and subdued wages are weighing on inflation and could start to skew the outlook for monetary policy lower, if they worsen.

Households are under pressure, wages low, growth sputtering and outlook negative according to a recent report from major lender ANZ bank.

A sharp focus is forecast on the labour data, therefore, on Friday.

Data, Events to Watch for the Pound

The most significant release for Sterling will be the minutes of the Bank of England (BOE) Rate meeting published just after the announcement has been made on Thursday at 12.00 BST.

These are likely to show a 7-1 voting split with Kirsten Forbes being the only dissenter again (it will be her last meeting).

Inflation rose more steeply than forecast in May, but this is unlikely to feed through into more hawkish rhetoric as, “entirely” driven by the weaker currency.

"Demand indicators remain mixed, so there’s little evidence that this assessment will change,” says an analysis released ahead of the event by TD Securities.

A more hawkish stance would propel the Pound higher but this move is unlikely to be sustainable in the current environment of political uncertainty.

Before the Bank of England event watch out for the release of retail sales data.

This is a key component of the UK economic story owing to how reliant the economy is on consumer spending.

Amidst rising inflation and lack-lustre wage growth the ability of the consumer to spend more is being seen as largely constrained, particularly as personal debt levels are at historically extended levels.

Economists are forecasting monthly retail sales to fall 0.8% in May leaving an annualised reading of 1.7% growth.

Disappointment might hurt Sterling against the Aussie Dollar further.

The Australian Dollar fell against an outperforming British Pound on Thursday but rose against other major currencies following the release of better-than-expected Aussie jobs data.

The Australian Dollar was at risk of declining to a two-month low after testing an important level of technical support on Wednesday but a somewhat widely anticipated correction lower could find itself limited by further weakness in the U.S. Dollar over coming days and weeks.

The Australian Dollar could be at the at the start of a multi-year upswing that could last until through 2021, according to economists at Australian lender Westpac. 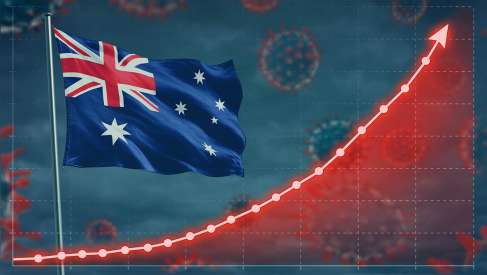 The Australian Dollar edged higher Tuesday in defiance of a short-term reversal signal on the daily charts and a wobble in gold prices, although the Euro's use as an instrument of Turkish economic coercion could drive additional upside given the Aussie's inverse correlation with the Dollar Index.