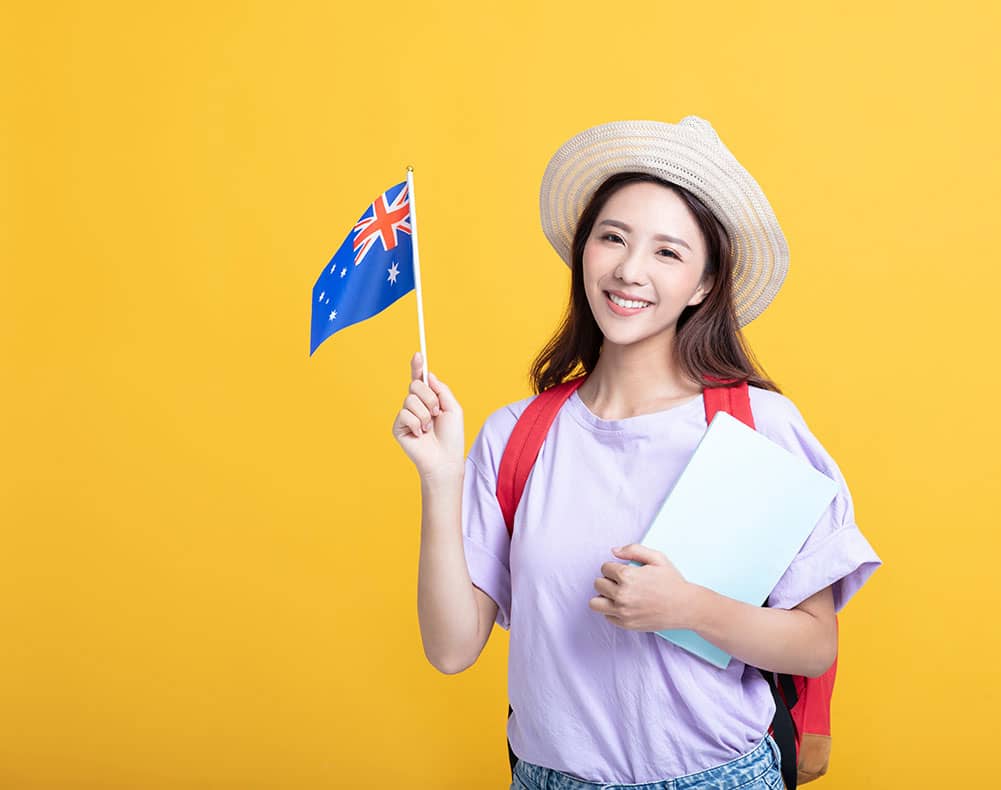 Interest rates, a boost to commodity exports and improved risk sentiment amongst investors all point to a stronger performance by the Australian Dollar over the coming months says HSBC.

But it will be the return of Chinese citizens that offers the biggest boost to the country's export growth says HSBC which has updated clients with its latest currency market predictions.

"A reopened China could provide substantial opportunities for a strong recovery of Australia’s exports of services," says Paul Mackel, Global Head of FX Research at HSBC.

HSBC's FX research team joins the majority of its peers in thinking China's recent steps to exit its zero-Covid policy will boost global growth and China-facing proxies such as the Aussie Dollar over the coming months.

"China's faster-than-expected reopening, wide-ranged policy support for the property sector, and ambitious infrastructure investments have led investors to consider increasing their exposure to the AUD, given the deep and multidimensional linkage between the two economies," says Mackel.

The reopening of China has often tended to focus on the prospect of improved commodity exports, particularly now that China appears to have lifted a ban on imports of Australian coal.

But HSBC finds the prospect of greater coal exports is of marginal consequence to the Australian Dollar's prospects as a strong pick-up in Australia's coal exports is not anticipated just yet.

Instead, it is the return of people that will offer the greatest boost to the economy's export potential and the Aussie Dollar.

HSBC has broken down the data and finds that in 2019 visitors from China accounted for 15% of Australia's total short-term visitors which was substantially higher than a post-Covid 2.6%. 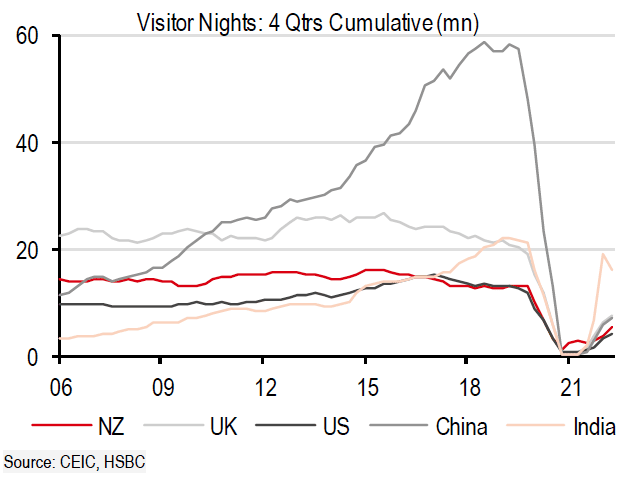 Above: "China visitors tended to spend more nights in Australia than others" - HSBC.

"Therefore, a reopened China could provide substantial opportunities for a strong recovery of Australia's exports of services," says Mackel.

The accumulated savings of Chinese citizens through the pandemic is expected to be significant and HSBC expects this to translate into a noticeable services-lead export boom over the coming months.

Chinese students are estimated to be worth about $40BN to the Australian economy and there are reports of a surge in applications from China to Australian universities over recent weeks. 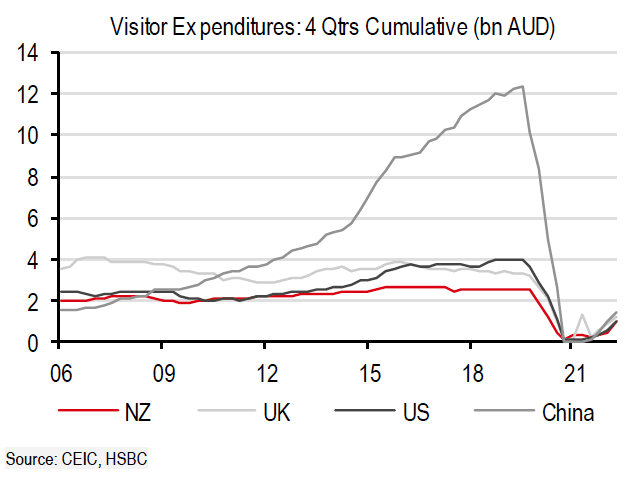 Above: "China visitors tended to incur considerably higher expenditures than others" - HSBC.

HSBC calculates the potential visitor expenditures a reopened China may bring to Australia to be worth A$11.2BN in 2023.

"This represents a very significant flow, roughly equal to 75% of Australia’s quarterly services deficit over the past four quarters," says HSBC.

Economists at J.P.Morgan estimate that over the next two years, the country's GDP will grow 1.0% thanks to inbound Chinese students and holidaymakers.

"I have a strong view the change of government has definitely helped us with the Chinese market," said Honeywood.

Beyond the China story lies the all-important matter of the U.S. economy which still matters greatly for the Australian Dollar according to HSBC.

Analysts say the correlation between the currency and global investor sentiment remains strong and 2023's performance could still ultimately be determined by whether the U.S. economy experiences a 'soft landing'.

The U.S. economy is slowing as higher interest rates bite, posing the prospect of a recession.

The depth of the recession could be shallow, or be avoided altogether if the Fed doesn't 'over hike'. This soft landing scenario is consistent with global conditions that are supportive of the Australian currency.