An Asian-lead market rebound looks to extend into a second day, creating a supportive global backdrop for the Australian Dollar.

The Aussie looks set to record a third consecutive daily advance against the Pound, U.S. Dollar and other major currencies, although gains are tipped by analysts to remain limited in light of strict Covid lockdowns impacting the majority of the country's population.

The Australian Dollar was amongst the leading beneficiaries of a shift in market sentiment on Tuesday that saw investors buy up discounted stocks and commodities following the previous week's dip.

"The commodity-linked currencies were once again the biggest winners. A strong bounce back in the price of major commodities such as oil and copper is aiding the commodity dollars," says Raffi Boyadjian, Lead Investment Analyst at XM.com.

The price action confirms the Australian Dollar's 'high beta' status, meaning it tends to appreciate when global stock markets are rising and fall when sentiment sours.

This is particularly the case with regards to the economic fortunes of China and the Asian region, given the heavy reliance of the Australian economy on these export markets.

He called for efforts to push down real lending rates and financing costs for small companies.

The developments come as Chinese authorities react to a growth slowdown that is to a degree linked with an ongoing spread of the Delta variant of Covid-19 in China and the wider Asian region.

How the pandemic evolves in China and how authorities react could heavily influence how the Australian Dollar trades going forward.

Risk sentiment over coming days will however also depend on the tone struck by the U.S. Federal Reserve's Chair Jerome Powell when he addresses the Jackson Hole symposium on Thursday night.

Expectations are growing that the Fed will want to strike a non-committal approach to reducing monetary stimulus given the spread of the Delta variant in the U.S. and globally.

Such an outcome would be supportive of 'risk on' assets more generally and the Australian Dollar in particular.

"China is easing policy and Powell could kick the tapering can on Friday, keeping timing and speed of QE exit deliberately vague," says Broux.

The Pound-to-Australian Dollar exchange rate (GBP/AUD) has fallen back to 1.8959 as it looks on track to record a third consecutive daily decline. 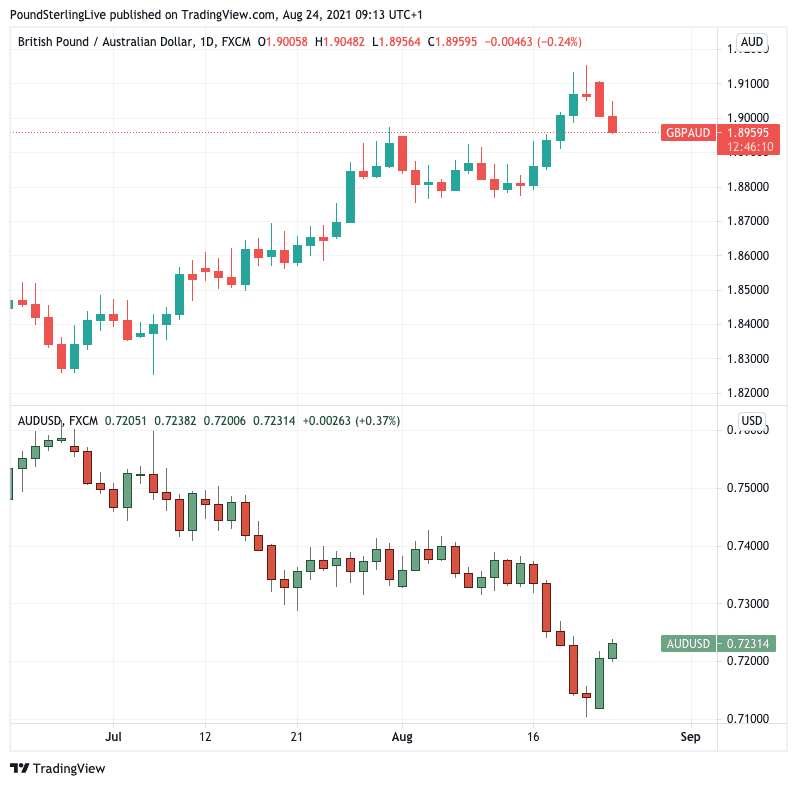 The pair had been as high as 1.9154 ahead of the turn in sentiment amongst global investors that triggered the Aussie Dollar rebound.

The Australian Dollar has advanced against the U.S. Dollar, going to 0.7231, with some analysts saying a period of short-term relief in AUD/USD is in order given bets for further downside are becoming increasingly crowded.

"The AUD has received a boost from positive risk sentiment, but a more sustainable rally in the in AUD will also require its economy opening back up," says Valentin Marinov, Head of G10 FX Strategy at Crédit Agricole.

The state of New South Wales recorded an additional 755 new Covid cases in the past 24 hours while Victoria recored 51 and Queensland 6.

Given the rise in cases in Victoria the prospect of the current restrictions ending next week, as is currently planned, looks remote.

In response to growing unease and the economic impact of the lockdowns, Prime Minister Scott Morrison said Monday that Australia must "learn to live with" Covid-19.

He said the strategy was to achieve a vaccine penetration of 70%-80% before ending the cycle of lockdowns, an outcome that could however only be achieved by December given existing vaccination rates.

"The drum beat for re-opening is getting louder with business leaders and the government’s chief medical advisor, the Doherty Institute, both backing the Federal and NSW governments’ plans to re-open once 70-80% of the population has been fully vaccinated," says Marinov.

The Reserve Bank of Australia (RBA) is however tipped to maintain a cautious policy stance in this environment, which will deprive the Australian Dollar of an important channel of support.

"The weights on AUD are building. Global growth concerns and lower commodity prices are the latest additions to the list. Other weights include the negative Australia-US 10-year bond spread, slowing Chinese economic momentum and the risk the RBA delays tapering asset purchases," says Kevin Xie, Senior Asia Economist at Commonwealth Bank of Australia.

The RBA said in August it would reduce the pace of weekly quantitative easing purchases to A$4BN in September from A$5BN now.

But further reductions look unlikely given any post-lockdown rebound could only really begin in October if restrictions are lifted at the end of September.

Therefore while the Australian Dollar might be benefiting from near-term relief in global sentiment, domestic challenges suggest bouts of weakness will be deeper and more enduring than periods of appreciation.

This should keep GBP/AUD supported.