The Australian Dollar remained one of the better performing major currencies of the period in the mid-week session but its recovery prospects are likely limited, according to Capital Economics, and downside risks are growing due to developments around commodity prices and the Chinese economy.

Australia’s Dollar was third placed for the week among major currencies on Wednesday when sitting behind only the Japanese Yen and New Zealand Dollar after the Reserve Bank of Australia (RBA) announced slight changes to its monetary policies on Tuesday.

But the antipodean currency remained close to 2021 lows when trading barely above 0.75 against the U.S. Dollar, while the Pound-to-Australian Dollar rate was still close to 2021 highs in what is testament to the limited boost the Aussie received after the fact.

“Although the RBA’s hawkish message and further strong data out of New Zealand sent the Aussie and Kiwi higher, we are becoming less confident in our existing, bullish forecasts for both currencies,” says Jonas Goltermann, a senior markets economist at Capital Economics. 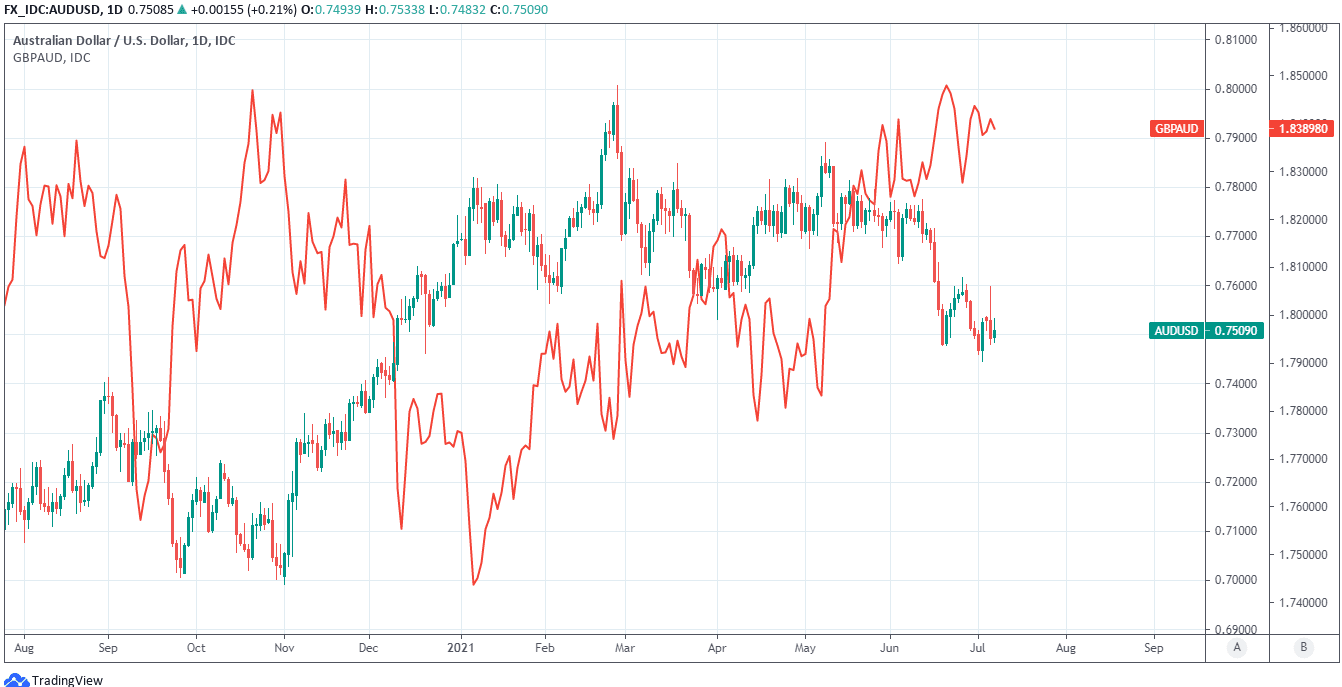 Above: AUD/USD shown at daily intervals with Pound-Australian Dollar rate.

“In our view, much of the good news on strong domestic recoveries and monetary policy normalisation in Australia and New Zealand is now discounted, but the downside risks from the economic slowdown in China and its impact on commodity prices are underappreciated,” Goltermann adds.

The RBA reduced slightly the amount of Australian government bonds the bank buys under its maiden quantitative easing programme from A$5bn to A$4bn and indicated that it might be willing to entertain the idea of an interest rate rise in 2024 or perhaps even before then.

And the bank hadn’t been expected to reduce the pace of the bond purchases quite so soon while only a handful of analysts and economists had dared to suggest that it might relax guidance relating to its 0.10% interest rate.

However, there may be less scope for an interest rate rise any time soon if Goltermann is right about risks to Australia’s growth outlook stemming from a possible slowdown in China.

“Both Australia and New Zealand have close trade links to China, and their terms of trade depend a lot on commodity prices.”

China is Australia’s largest trade partner and the buyer of large shares of its commodity exports each year, which is notable in the context of an anticipated economic slowdown there and recently announced curbs on the production of steel; a key ingredient of which is Australian iron ore.

Iron ore exports are worth around 10% of Australian GDP, which is why the currency can often be sensitive to movements in prices of it.

“It is increasingly evident that China’s economy is slowing down. The latest round of data came in well below consensus, and we expect that trend to continue. This supports our forecast that commodity prices will fall back after their recent rally and suggests to us that the downside risks to the Aussie and Kiwi are growing,” Goltermann warns. 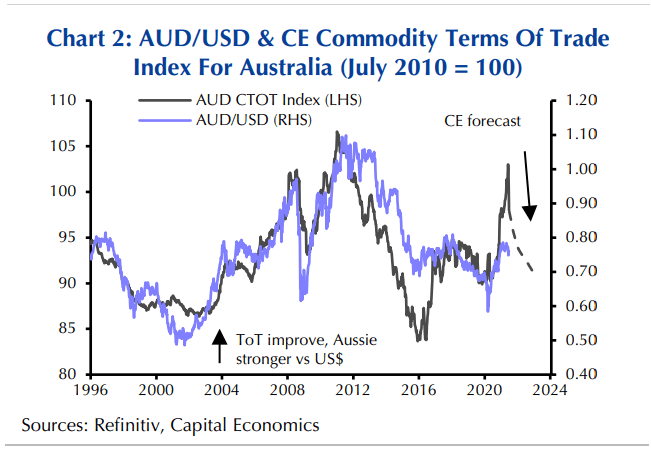 The Chinese economy saw a strong recovery in 2020 after getting a headstart in the coronavirus containment effort, which helped make the Australian Dollar one of the first to recover from losses seen at the onset of the pandemic.

Since the turn of the year however, indicators of Chinese growth have begun to slow amid a gradual withdrawal of monetary and fiscal support provided earlier in the pandemic, although it’s other policies like steel production curbs which matter most to the Aussie.

These the government says are designed to avoid overcapacity in the sector, to reduce pollution and move the economy onto a more sustainable growth path, although they’re also a potential headwind for the Australian economy.

"The Australian economy is on a positive path. Output is now above its pre-pandemic level and more Australians have a job today than they did before the pandemic,” says RBA Governor Philip Lowe at a press conference following Tuesday’s policy decision. 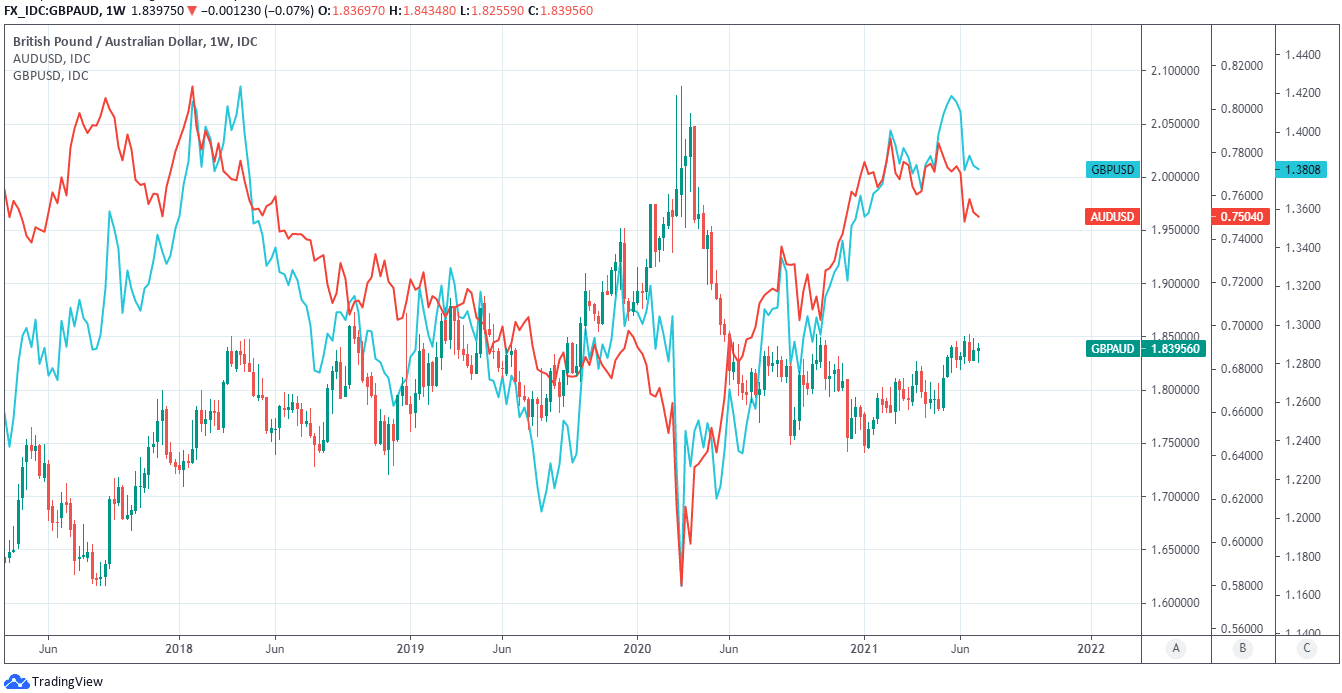 Above: Pound-Australian Dollar rate shown at weekly intervals alongside AUD/USD.

The prospect of a Chinese slowdown and commodity price declines is all the more notable for the Aussie and potentially also for the Pound-to-Australian Dollar rate because the recently robust performance of the economy was a key motivator of Tuesday’s RBA decision to adjust its policy settings.

Capital Economics’ current forecasts envisage AUD/USD spending the duration of this year and next oscillating around 0.78 before rising back to 0.80 in 2023, which are more conservative projections than those of many others out there in the market.

The consultancy sees the Pound-Australian Dollar rate spending much of this year and next around 1.79 before declining to 1.75 in 2023, although these projections would rise by default if Goltermann and the Capital Economics team were to downgrade their AUD/USD forecasts.