- GBP/AUD back at 1.80
- RBA market intervention weighs
- But Westpac are buying AUD weakness
- Rebound in global stocks could support AUD this week 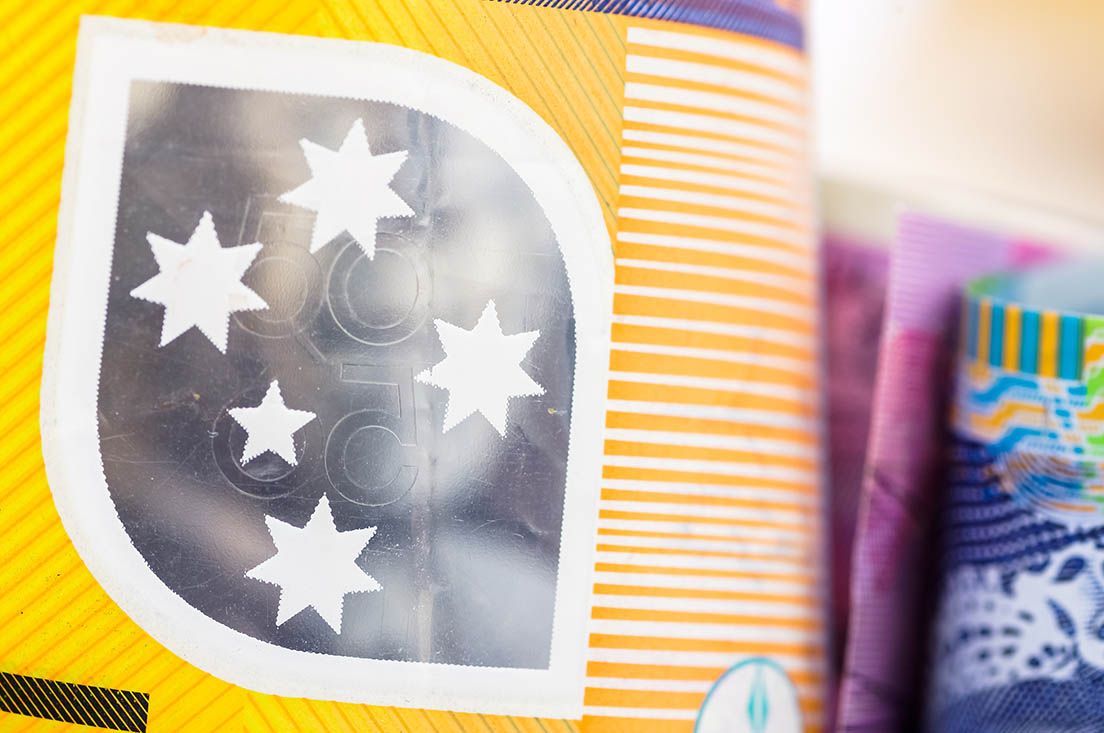 The Reserve Bank of Australia (RBA) surprised markets and bought Australian government bonds with a ten year maturity for the first time on March 01, as it actively seeks to keep the cost of finance in the economy under control.

Rising yields on government bonds are widely held as a negative development for economic growth, but at the same time the rise in Aussie ten-year yields had been a source of support for the Australian Dollar as they attracted foreign investor inflows.

This relationship has corresponded with a period of strong performance in the Australian Dollar which was the best performing major currency of the past year, and past month, at the mid-week point of last week.

"The rise in yield of Australian government bonds – probably also due to the size of the Australian bond market – was much more dramatic than that of US T-notes," says Ulrich Leuchtmann, Head of FX and Commodity Research at Commerzbank.

But a central bank fightback is underway with the RBA on Monday announced plans to buy more than A$4BN of longer-dated securities, following up on a surprise boost in purchases of shorter-maturity debt at the end of last week.

As the RBA intervenes in the market and buys these bonds the yield they pay investors fall back, thereby giving the RBA the ability to bring down the cost of borrowing more generally in the economy.

"During the recent rise in global bond yields and soaring commodity prices, Australian longer yields have risen even faster than those in the US, and this clearly has the RBA on the defensive to prevent a spike in yields from spiking the economy," says Saxo Bank’s Head of FX Strategy, John Hardy.

But for FX investors the flip of this development is a likely lower level of international demand for these bonds, prompting a degree of Australian Dollar underperformance.

"It is hardly surprising that the RBA immediately took action. It has been buying its own government bonds on a large scale. And it is doing so for the 5- to 10-year horizon – i.e. with significant duration leverage," says Leuchtmann.

The developments come in the wake of a sharp decline in the value of the Australia Dollar at the end of the previous week.

The Pound-to-Australian Dollar exchange rate (GBP/AUD) jumped 1.58% to reach 1.8011 amidst a broad based reversal in the Australian Dollar's value that coincided with a decline in global commodity and stock market prices.

This is the largest one-day rise in the exchange rate since April 2020. 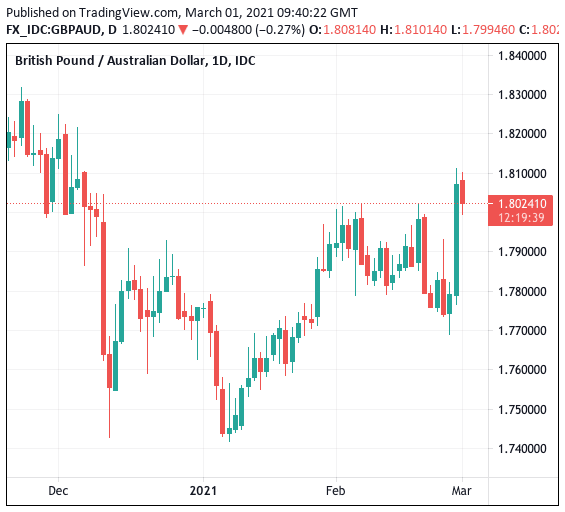 The Australian Dollar has been the biggest FX beneficiary of the so-called 'reflation trade' that has gripped markets for months now, a symptom of investors betting that a sharp economic rebound beckons in 2021.

However, the reflation trade has been questioned by the rise in bond yields which signifies investor concerns of sharply higher inflation rates in the future.

"The Aussie has proven the highest beta currency, together with the Norwegian krone (NOK) to the swings in sentiment late last week, with broadly faltering commodity prices added to the volatility in other markets, which brought down both AUD and NOK hard against the suddenly surging U.S. Dollar," says Hardy.

The Australian Dollar's performance this week could therefore depend heavily on what happens in the U.S. and how the bond market there evolves.

Falling U.S. yields would likely prompt further recoveries in global equity and commodity prices, thereby potentially underpinning AUD. However, any further rises in the yields as investors begin to fret about inflation could send the currency lower once more.

Given this view, they have recommended going 'long' on the currency in anticipation of a rebound and continuation higher.

"We have been arguing to use dips in the Australian Dollar as a buying opportunity for some time now – and we see the current dip as just such an opportunity," says Robert Rennie, a foreign exchange strategist with Westpac.

However from a technical perspective, Karen Jones, Team Head of FICC Technical Analysis Research at Commerzbank, notes some potential damage to the Australian Dollar's bull case.

"AUD/USD charted a key day reversal last week from psychological resistance at 0.8000 and sold off sharply to key support offered by the 55 day moving average at 0.7705 and uptrend support at 0.7730 (which has been slightly eroded," says Jones. 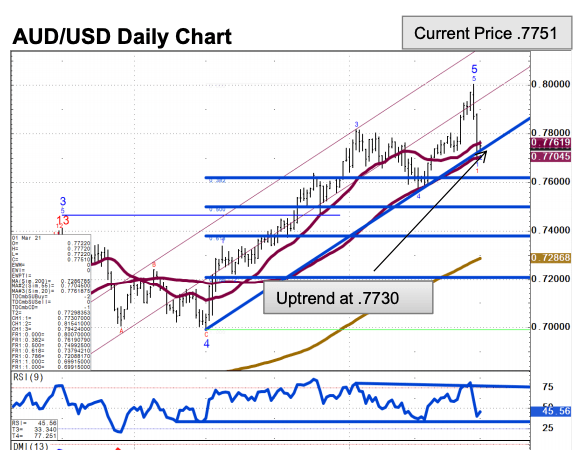 Jones says intraday Elliott wave counts are implying that rallies to 0.7810 are likely to fail.

Any weakness is nevertheless regarded as being a temporary state of affairs with Jones saying she is targeting a more notable move higher over the one to three month horizon.