-AUD outperforms as risk assets stabilise but is constrained by RBA.
-RBA rate cut and easing fears to keep a lid on AUD through October.
-But U.S. budget to fuel rally in 2021 no matter who wins Nov election.

The Australian Dollar could be constrained over the coming weeks by the Reserve Bank of Australia (RBA) monetary policy outlook, according to local analysts, although a widening U.S. budget deficit and prospect of a global economic recovery currently insure a brighter, medium-term outlook.

Australia’s Dollar was higher against all major currencies on Wednesday as U.S. stock market futures recovered from losses brought on when President Donald Trump pulled the plug on efforts to agree another financial support package for households ahead of next month's election.

The Pound-to-Australian Dollar rate was -0.40% lower at 1.8054, with losses resulting from Aussie strength as well as weakness in Sterling, which has been gripped by indecision amid more conflicting Brexit headlines as the negotiations go down to the wire.

But some of Australia's big four lenders are skeptical however, that the Aussie will be able to advance further in the short-term after the RBA was seen hinting on Tuesday that a further cut to the cash rate, to a new record low, could be announced next month alongside a range of other measures.

“From our perspective, there is considerable encouragement that the Board plans to move next month having given the Federal Government clear air to sell its Budget tonight. There were a number of key changes in the Governor’s Statement that point to an imminent move in policy,” says Bill Evans, chief economist at Westpac.

Evans cites the RBA’s parting line Tuesday, among other factors, for thinking the bank is all but ready to announce another dose of monetary policy medicine for the economy. The bank said it “continues to consider how additional monetary easing could support jobs as the economy opens up further.”

Westpac looks for a reduction in the cash rate to 0.10% on November 03, which is also the day of the U.S. presidential election, and a cut in the three-year bond yield target from 0.25% in addition to a lowering of rates charged on the pandemic-related term funding facility that provides cheap central bank cash to commercial lenders. 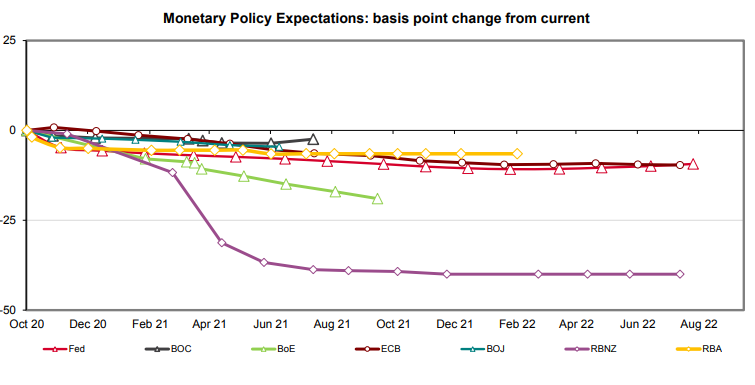 Above: Market expectations for changes in G10 cash rates, in basis points, with RBA in yellow. Source: Westpac.

“We expect AUD/USD to trade on the defensive in the short‑term because the probability of additional RBA easing in November is high and US policymakers failed to agree on a second fiscal stimulus package,” says Elias Haddad, a strategist at Commonwealth Bank of Australia.

This may already be reflected in the price of the Australian Dollar given the market-implied cash rate for November 03 was just 0.08% on Wednesday, down from 0.084% on Monday, although analysts say that uncertainty about the exact size and shape of any November easing will limit appetite for the Australian Dollar ahead of the decision.

"We expect the RBA to cut the cash rate to 0.1% in November. ‘Pure’ QE in November seems likely, but it may be delayed until next year," says Catherine Birch, an economist at ANZ. "Trump has returned to the White House but it is too early to say if he has recovered from COVID-19 so this uncertainty remains."

RBA fears, and U.S. as well as global economic risks stemming from Washington’s continued failure to approve additional household support are not the only threats to the Aussie over the coming weeks as there's also the November 03 election, where the lingering prospect of a surprise Trump victory acts as another potential headwind.

“If Trump wins and Republicans retain the Senate our survey shows this would be the most positive scenario for S&P 500 (24 hours after the election results), with it expected to rise by 2.3%,” says Jordan Rochester, a strategist at Nomura. “Respondents expected USD to strengthen the most under this scenario."

The election risks prompting at least a short-term breakdown in the correlation between the S&P 500 and U.S. Dollar, which has been reflected by the lockstep relationship between AUD/USD and the S&P in recent months, as both have been undermined of late by the mounting risk of a contested election.

"From our standpoint, FX investors could wait for a dip towards better support in the vicinity of 0.70 to get long or, if risk variables and copper prices hold firm, buy the pair on a close above 0.72. But the important factor to recognize in the current environment is that the AUD is not 'leading' other variables including risk appetite. Rather, AUD is a 'follower,'" says Stephen Gallo, European head of FX strategy at BMO Capital Markets. 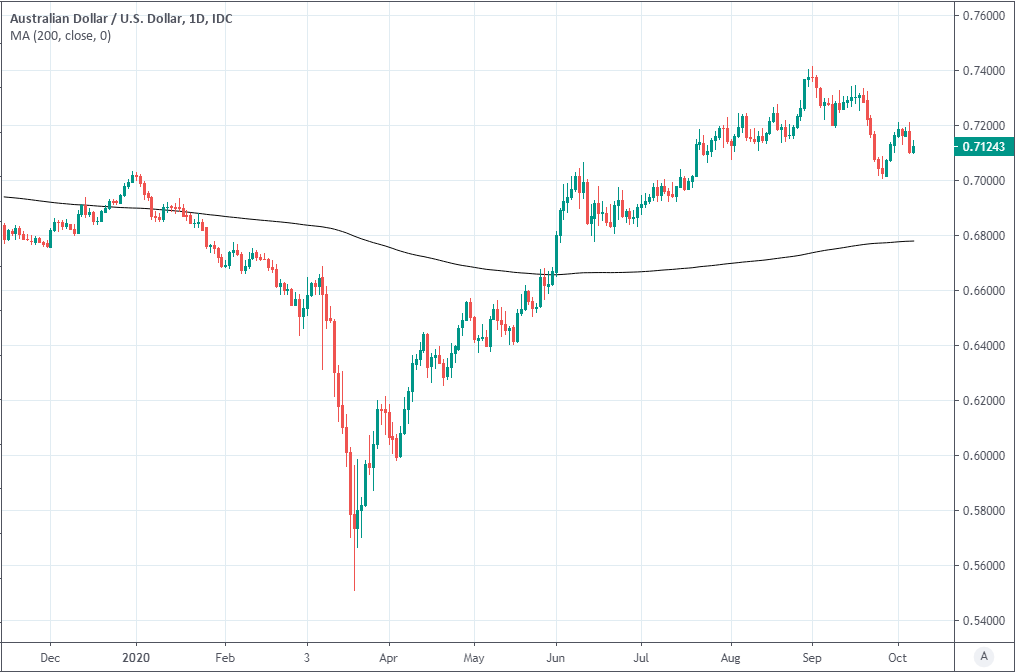 Above: AUD/USD shown at daily intervals.

The gap between the two candidates is a narrow one, and with the country already roiled by civil unrest in some parts, investors have become uneasy about the outcome, not least of all because President Donald Trump has threatened repeatedly to challenge a loss in the Supreme Court, citing concerns about an increase in mail-in voting. But once the dust has settled and no matter who wins, investor focus is seen returning to the spiralling U.S. budget deficit and its likely offset by the Federal Reserve (Fed).

“If we get a synchronized global recovery in 2021 as we anticipate, it usually also leads to a weaker USD against most peers (as we saw over summer),” says Andreas Steno Larsen, chief strategist at Nordea Markets, who forecasts an AUD/USD rate of 0.73 by year-end and 0.75 by June 2021. “The USD level could be a focal point for the Federal Reserve during 2021 as the USD remains super strong compared to historical averages.”

The Fed has created trillions of new Dollars this year to plug the pandemic-inspired gap between the Treasury’s income and expenditure. Meanwhile, and even after the coronavirus pandemic drove Australia's deficit into the double digits this year, the country's debt-to-GDP ratio is expected to remain among the lowest in the developed world at less than 40% of GDP next year.

Australia's government forecast Tuesday a debt-to-GDP ratio of 36.1% for 2021. In the U.S.Congressional Budget Office forecasts suggested last month that this will come in at 98% of GDP for 2020 and that it could rise to 195% of GDP by 2050 without reforms in Washington. A further U.S. budget blowout is widely assumed by analysts and could act to keep AUD/USD from meaningful declines in the coming weeks no matter what the RBA says or does next month.

“The near term risk remains for a slide to .6964, the 23.6% retracement. There is scope for this to extend towards the 200 day ma, the February high and mid-June low at .6781/74, which is expected to hold,” says Karen Jones, head of technical analysis for currencies, commodities and bonds at Commerzbank. “The resistance line at .7253 guards the .7413 recent high.” 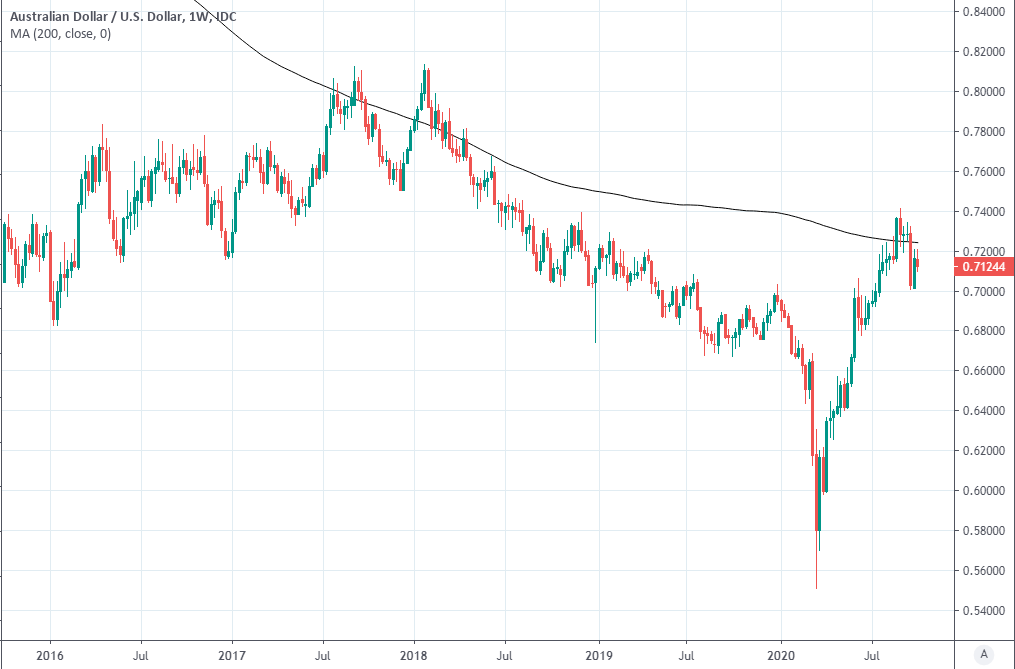 Above: AUD/USD shown at weekly intervals with 55-week moving-average in black.