Analysts warn the Australian Dollar is vulnerable to fresh losses in the short-term, meaning the currency risks falling short of some previously bullish year-end forecasts.

Australia's Dollar rose against most rivals on Tuesday as the U.S. Dollar softened and some commodity prices rose but it’s still susceptible to fresh declines with both technical and fundamental analysts warning this week that there’s scope for a fall to around 0.68 in AUD/USD.

Karen Jones, head of technical analysis for currencies, commodities and bonds at Commerzbank says there is scope for some further short-term gains in AUD/USD towards the 200 day moving average, the February high and mid-June low at 0.6778/74, but this zone could prove to be a limit to any further strength.

"Currently intraday Elliott wave counts are contradictory but are suggesting that rallies are likely to find initial resistance at the 0.7135 level and contained by the 0.7290 minor resistance line,” says Jones, who’s a seller of AUD/USD from 0.7224 and is targeting 0.68. 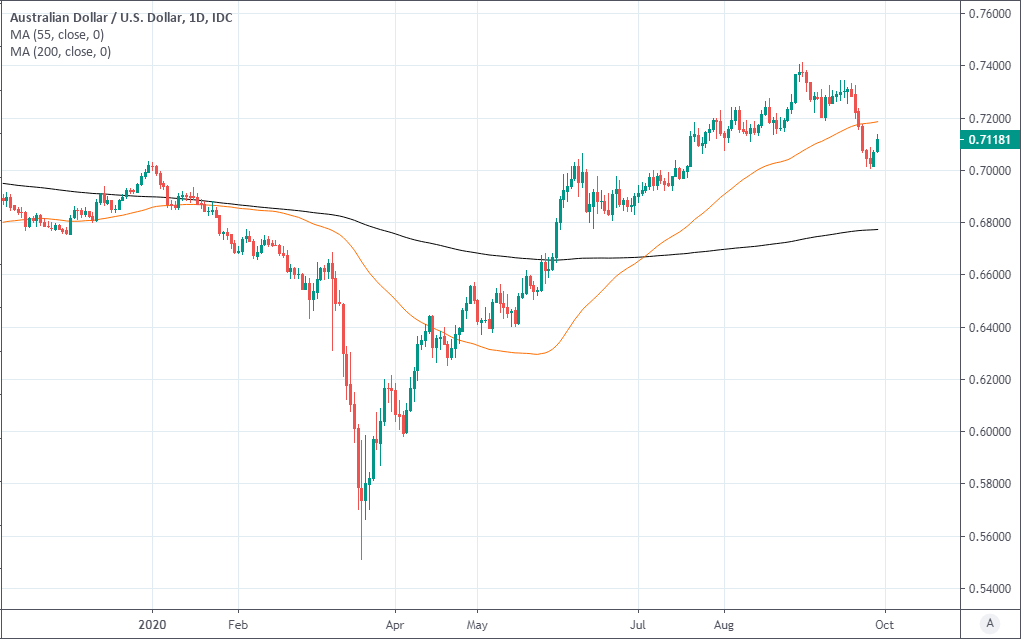 Above: AUD/USD at daily intervals, trading below its 55-day moving-average (orange) but above its 200-day average (black).

The Aussie topped out around 0.74 in late August and has since had the rug steadily pulled out from under it by faltering stock markets and a resurgence of coronavirus infections in Europe, which has placed a question mark over economic recoveries as well as the market’s bearish U.S. Dollar narrative.

Wednesday’s U.S. election debate and any impact on the S&P 500 index that AUD/USD has followed closely for months is the next big hurdle for the Aussie, ahead of next Tuesday’s Reserve Bank of Australia (RBA) policy decision and the November 03 presidential election.

“In our view, AUD/USD can fall further in the near term because of a stalling global economy, the risk of more policy easing by the RBA and the US election. We judge AUD/USD could fall to 0.6850. A fall to 0.6850 would put AUD/USD comfortably below fair value," says Joseph Capurso, a strategist at Commonwealth Bank of Australia. "We see a fall in AUD/USD to 0.6850 as a temporary detour on a path to a higher level."

Between and beyond the debate and next week’s RBA decision, markets will pay close attention Europe's new coronavirus infections. Second waves have led to new restrictions on activity in the UK, Spain and Netherlands, while bringing Germany and France to the verge of new measures.

"A spike in virus infections in Spain, France and the UK raises the prospect of further and more stringent lock‑downs in Europe. The lift in the USD reflects its role as a ‘counter‑cyclical’ currency," Capurso writes.

"A shorter term influence may be the correction in global equity markets that is encouraging portfolio managers to adjust their hedges earlier than usual, pushing the USD higher. If this is the case, the influence will fade at the start of October,” Capurso says. "Politics matter too."

The Aussie can move sharply and by as much as 8% in the aftermath of controversial elections, but CBA expects at most a -4% fall in AUD/USD in the event of a victory by President Donald Trump and only a -3% fall if the opposition's Joe Biden wins in a ‘clean sweep’ where Republicans lose the senate. Biden enters the first debate with a healthy lead among pollsters, although it’s not so much the popular vote that matters.

“Polls for the ‘swing states’ that more or less decide the presidency suggest the winner of the race is uncertain given polling margin of error,” Capurso says. "Another source of volatility in AUD/USD is if the election result is disputed." 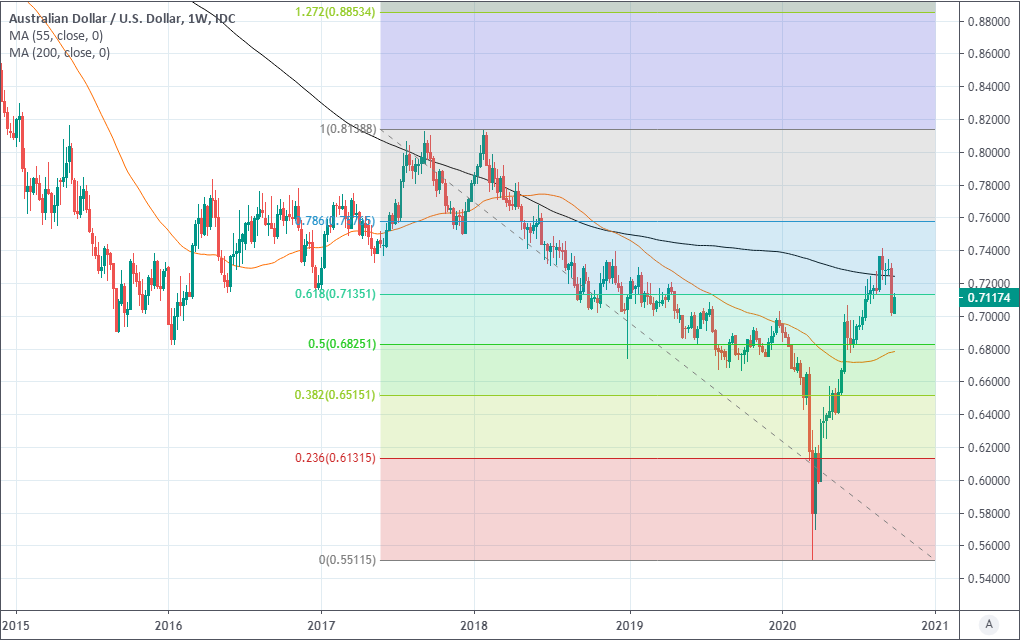 "President Trump has recently raised the prospect of a Supreme court challenge about mail‑in votes.  The disputed election in 2000 was resolved by the Supreme court 35 days after the election," Capurso adds.

The U.S. Dollar has a tendency to rise before and after presidential elections but once past the immediate fallout there’s a wide divergence in expectations of the greenback and other rival currencies, with President Donald Trump seen as supportive for the safe-haven currency and Joe Biden a burden for it.

Biden’s policy platform is geared toward increased spending and economy-encumbering regulations so would risk handing others and their currencies including the Aussie a free lunch at the expense of the U.S. and greenback.

Conversely, Trump’s hostility toward China has been a major source of support for the safe-haven U.S. Dollar and a burden for AUD/USD given the impact that a slowing Chinese economy can have on demand for Australian commodities as well as economic growth in Europe.

“Commodity prices are the major medium term driver of AUD/USD,” Capurso says. “Our mining analyst recently slightly upgraded his forecasts for iron ore and base metals, mainly because of an impressive industrial‑led economic recovery in China, as well as improving demand outside China.”

Capurso and the CBA team say there’s a danger the Aussie falls short of their forecast for an AUD/USD rate of 0.75 by year-end but that it still has “material further upside,” that should lift the Australian Dollar to 0.78 in 2021.